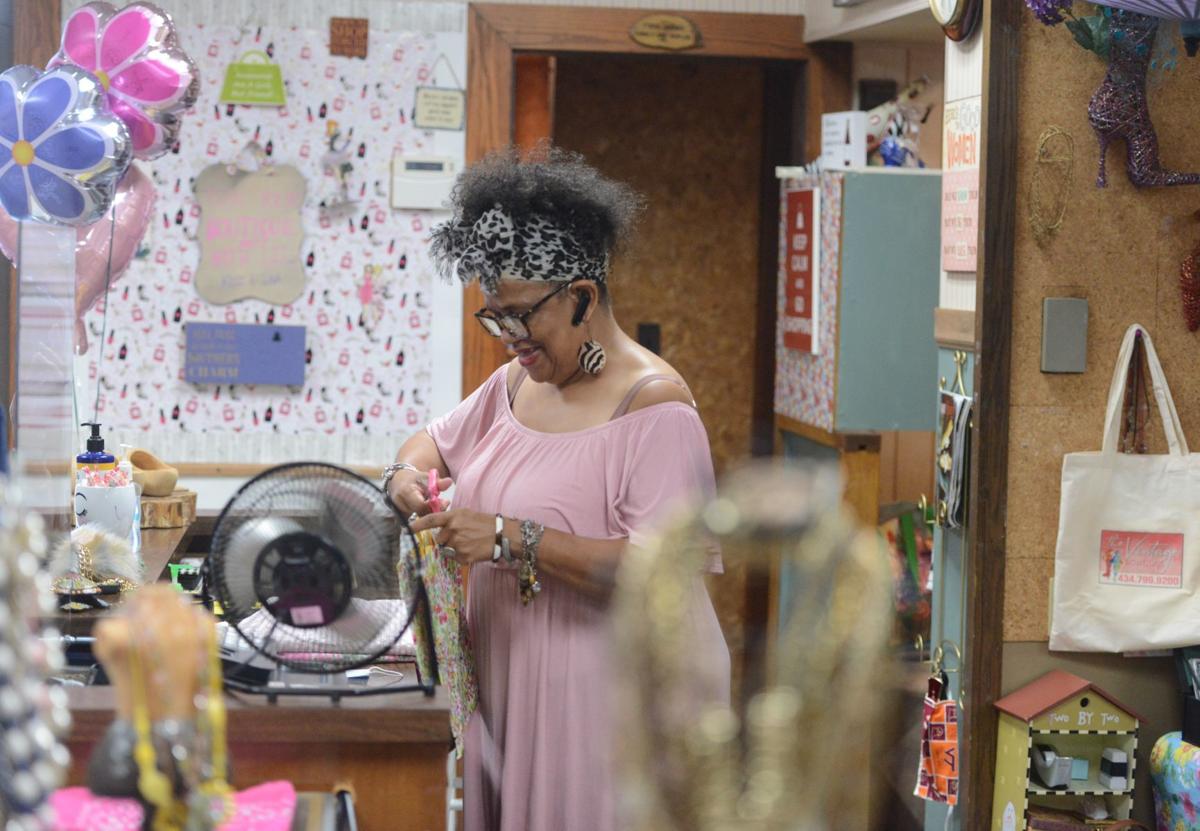 Roslyn Preston, a co-owner of The Vintage Boutique, works behind the counter on Wednesday, the shop's first day at its new location in the River District. 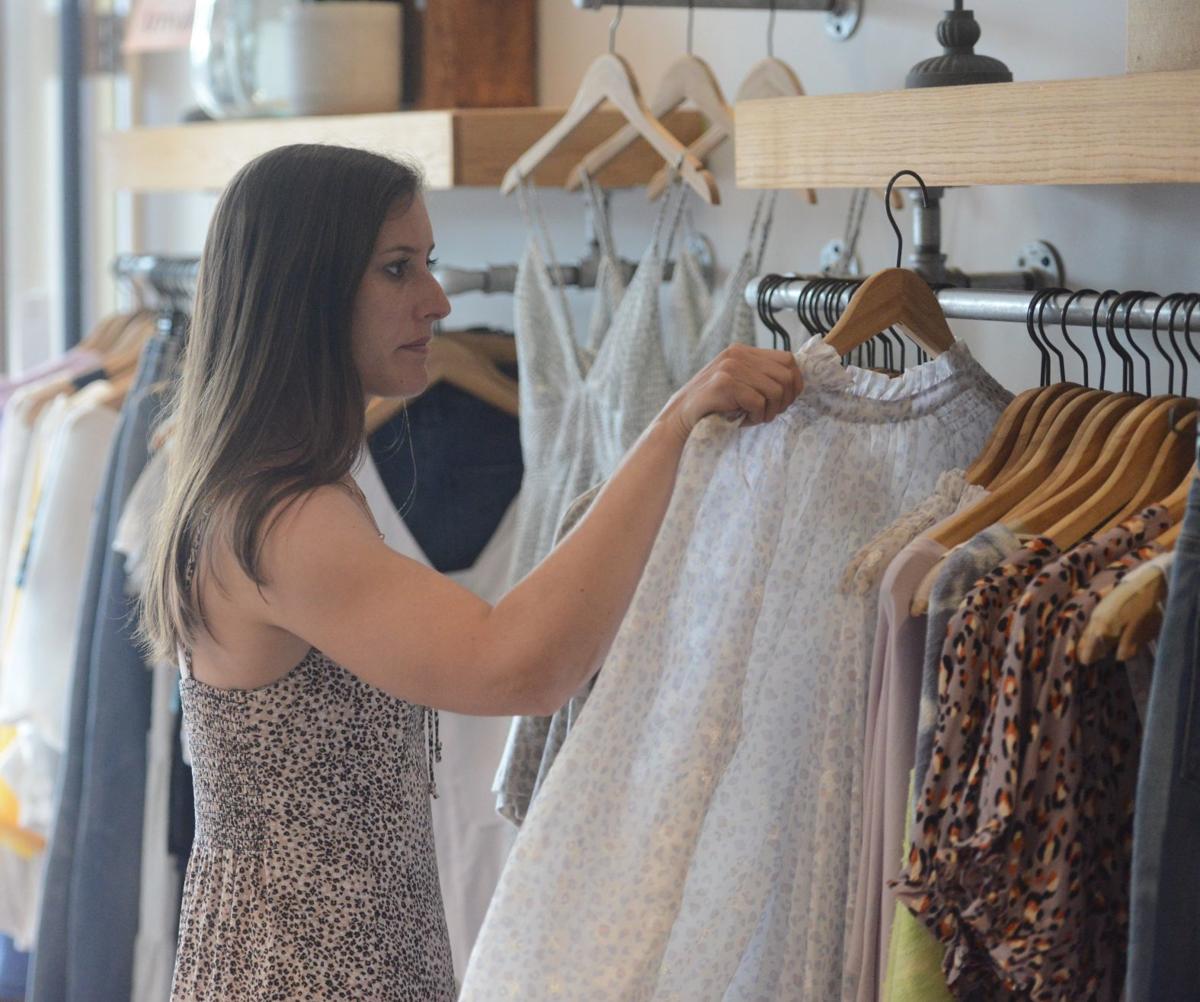 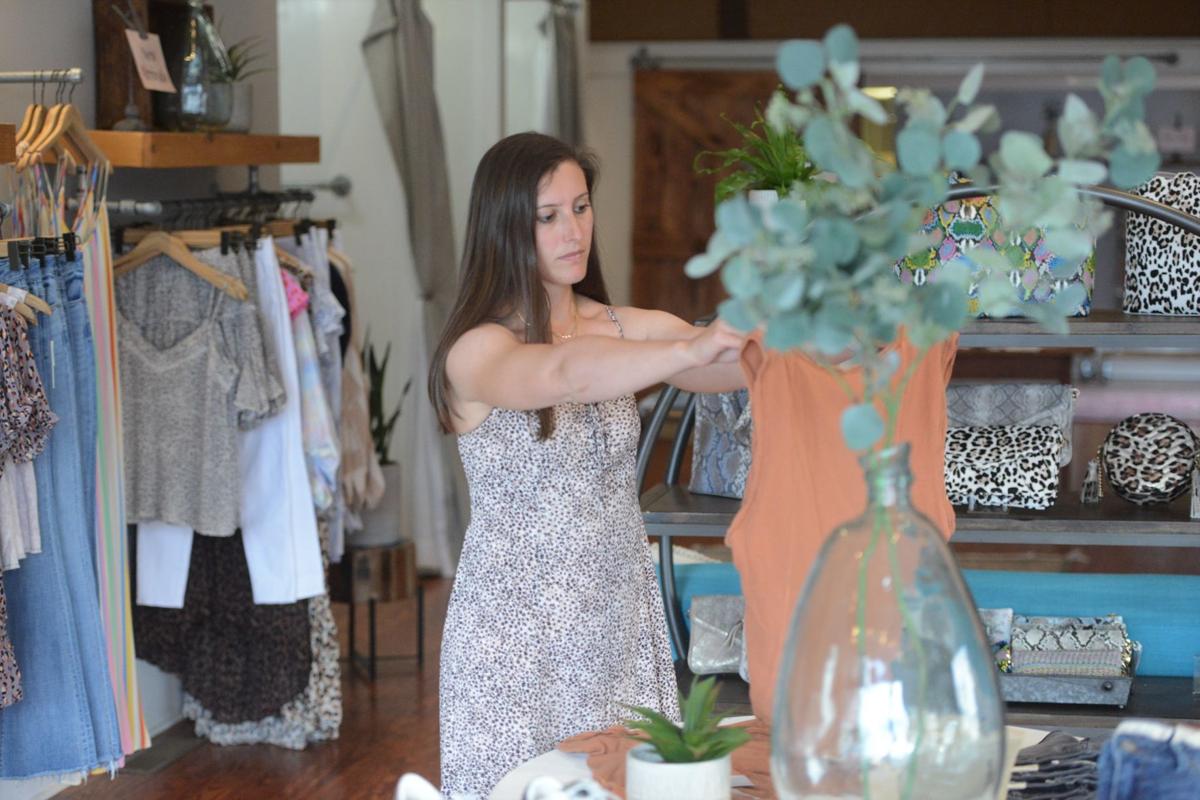 Sarah Gibson took advantage of two different grants from the city to help keep the Lizzy Lou Boutique open during the pandemic. 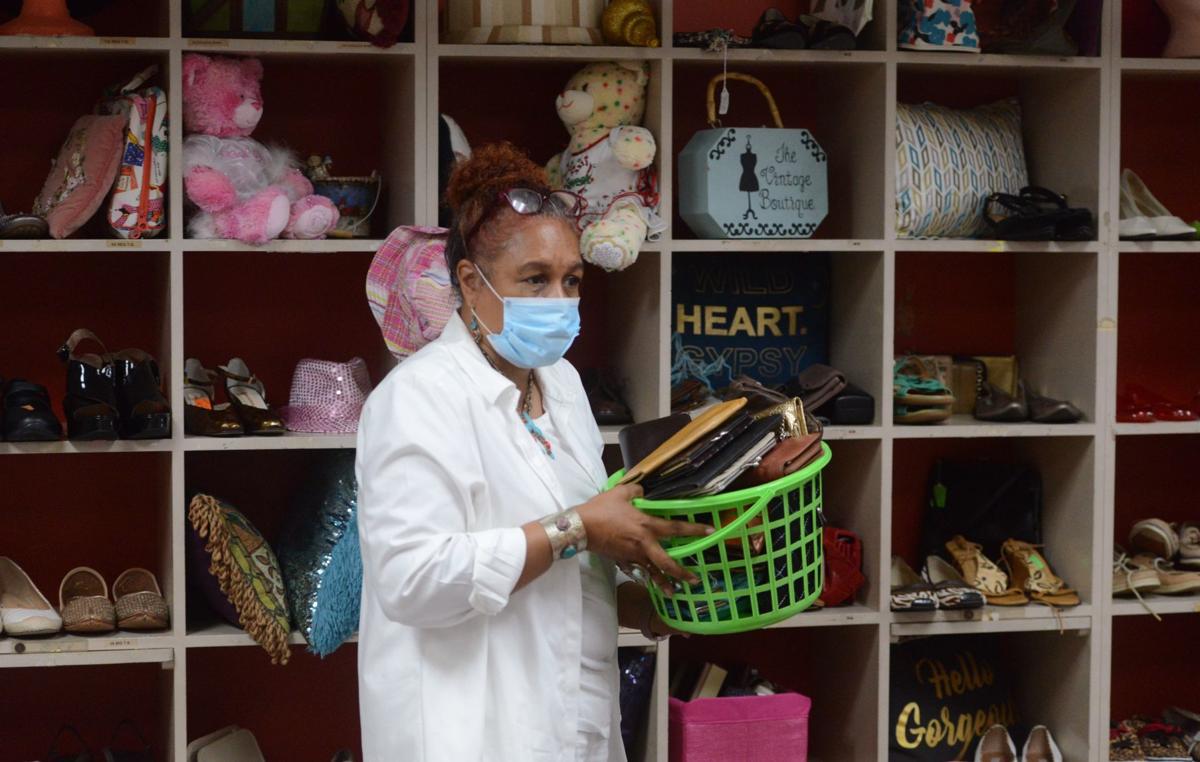 Lisa Jones, co-owner of The Vintage Boutique, which just opened at 214 North Union St., helps a customer on Wednesday. 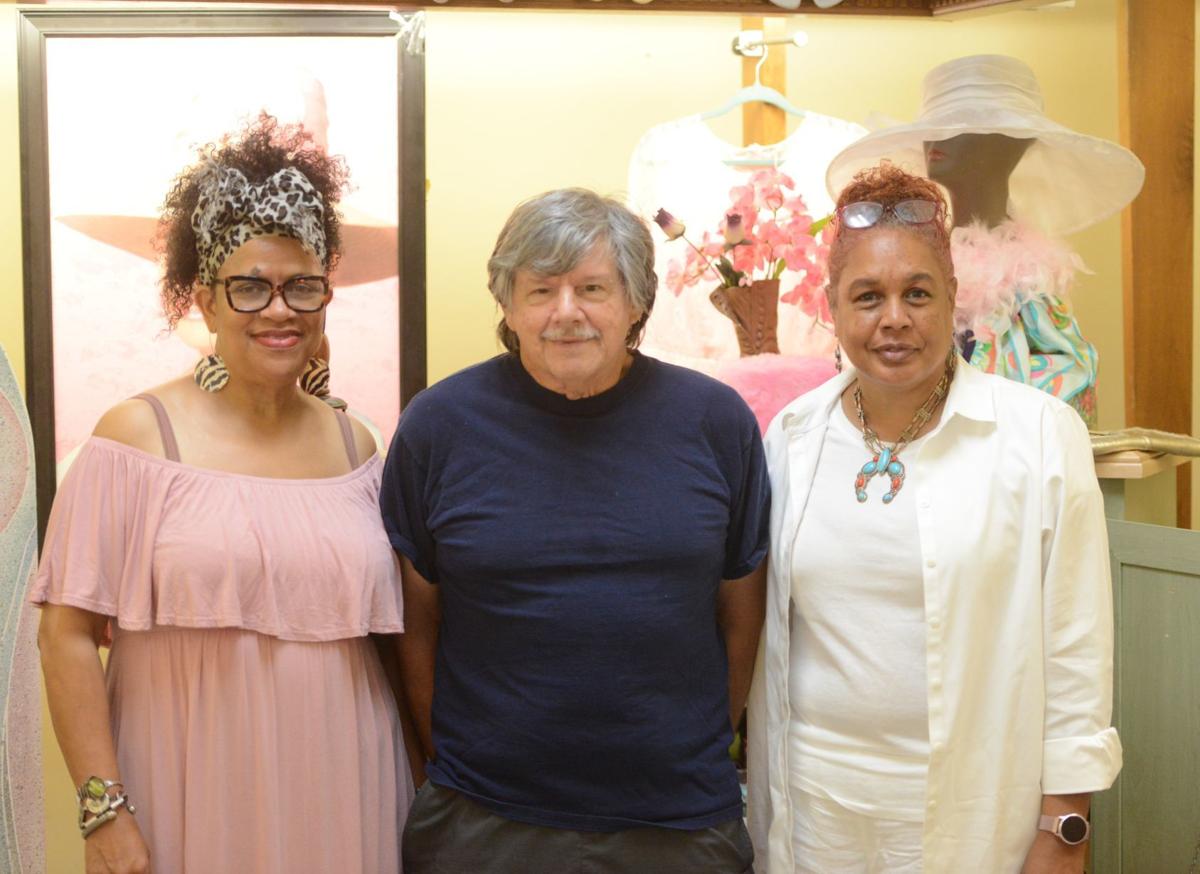 Co-owners of The Vintage Boutique Roslyn Preston (left) and Lisa Jones (right) pose with Barry Koplen on the opening day of their shop, which takes over the old Abe Koplen Clothing Co. location at 214 North Union St. 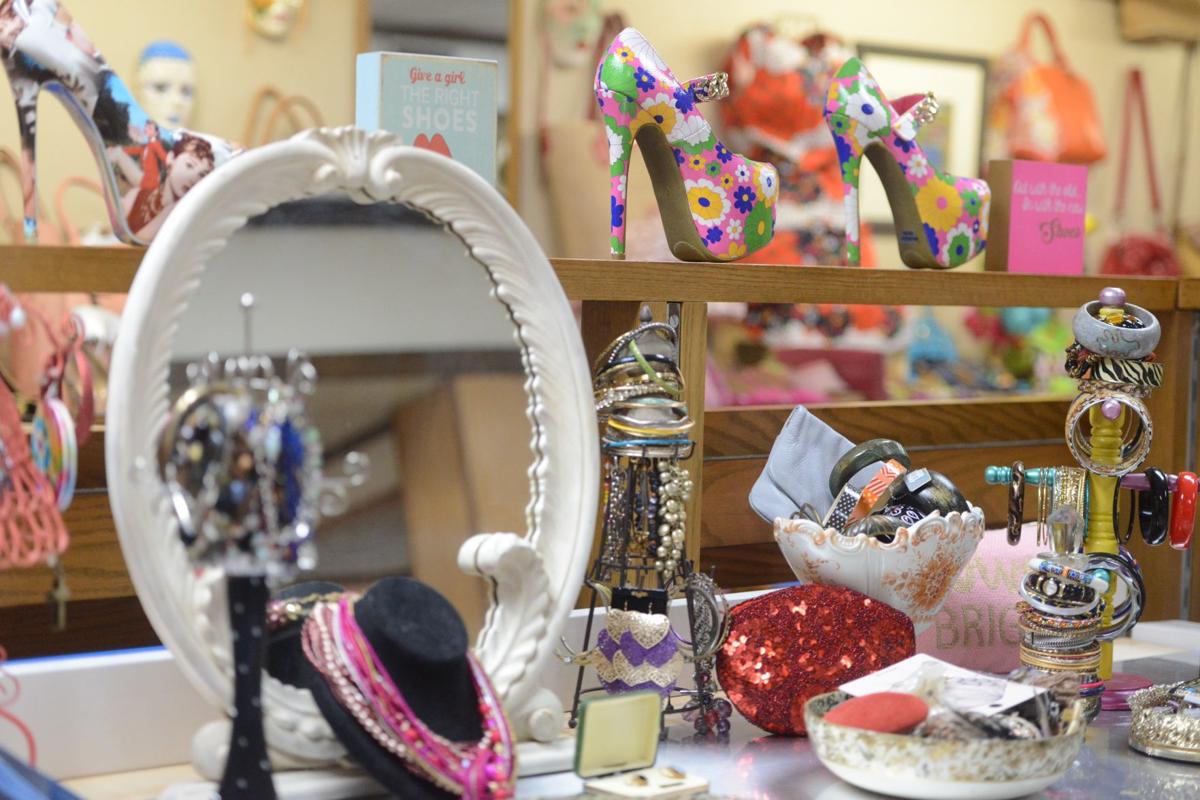 The Vintage Boutique specializes in women's clothing and accessories from the 1960s and 1970s.

July 1 marked the beginning of Phase 3 of reopening across Virginia, a significant milestone for local businesses and restaurants in the continued recovery from the economic downturn brought on by the coronavirus pandemic.

Dining establishments and brick and mortar retail locations are now permitted to operate at full capacity as long as other restrictions are also in place. But area officials are in agreement that this supposed progress should not result in a false sense of security for shoppers and dining patrons.

“From a public health standpoint, things haven’t changed,” said Alexis Ehrhardt, the president and CEO of the Danville Pittsylvania County Chamber of Commerce. “Just because you want something to go away doesn’t make it so.”

Aside from a high unemployment rate in Danville and Pittsylvania County, Ehrhardt said the economic impact on the Dan River Region’s small businesses could have been far worse during the last three months.

Through a series of local and federal grant and loan opportunities, dozens of businesses have weathered the storm to this point with new delivery protocols and creative techniques to remain open, visible and financially viable.

Ehrhardt is as encouraged as anyone by local business owners being proactive in finding resources to stay afloat and the consumer support they have seen. But, she said, there is still a long way to go in the fight against the coronavirus as it relates to a healthy local economy.

“This is not an economic crisis. This is a public health crisis with major economic ramifications,” Ehrhardt said, “and so if we can do our best to control the public health aspects of this, that’s going to result in a quicker reopening and recovery for our community.”

Help from the city

Danville received more than $3 million from the Federal CARES Act in June, an influx of cash that went toward, among other things, different programs to help sustain local businesses during the pandemic.

“As an office we’ve tried to supply resources in order to assist them with purchasing materials or covering costs to reopen to the public or reopen to their employees,” Bobe said.

Those programs and the utilization of the funds have so far helped businesses and restaurants incorporate curbside pickup or an online ordering system, for example, that have helped keep doors open and employees working.

To that end, though most entities had to close for a short while, there have so far been very few permanent closures reported in the area.

“It’s so encouraging to see our business community find new and innovative ways to serve their customer base and still remain economically viable,” said Diana Schwartz, the executive director of the River District Association. “I think they’ve done an incredible and commendable job in almost constantly changing the way that they have to do business in order to continue to serve customers and survive this very challenging time.”

At Lizzy Lou Boutique at 310 Main St., owner Sarah Gibson took advantage of both the rent reimbursement grant and the grant for marketing expenses. The latter funds mostly went toward Facebook advertising to promote her website and the updated hours of her store.

Of the rent relief grant, Gibson said, “That was really awesome because it came right before we were able to reopen and I was stretching myself a little thin. … That made a huge difference for me.”

She said she has also benefited from her curbside pickup and local delivery options, which she implemented while closed from March 23 to May 15. Lizzy Lou Boutique is open fewer hours now because there is not as much foot traffic, Gibson said, but she has also been encouraged by so many customers taking advantage of her appointment-only availability on Tuesdays.

“I’ve had several customers express that they want to come in, but they don’t really feel comfortable being around other people yet, so we’ll just schedule them their own time to come in,” Gibson said. “I’ve had a great response from that.”

That’s just one example of a business adjusting to the new ways of serving customers during a pandemic. On a grander scale, the overall health of the business community relies on all businesses doing the same.

“There’s still some fear that exists out there,” Schwartz said, “but the businesses have been good about trying to pivot to meet the needs of those customers.”

One significant loss to the local business scene was Abe Koplen Clothing Co., Danville’s oldest clothing store, which closed for good on May 1.

The business had struggled to recover from losses incurred following Tropical Storm Michael in October 2018, and the coronavirus pandemic expedited its eventual closing.

Just two months later, though, that space at 214 North Union St. has welcomed a new tenant: The Vintage Boutique, which is co-owned by Lisa Jones and Roslyn Preston and moved from its previous location on Piney Forest Road.

“Now we can showcase all of the fabulous finds and hope to bring out more people and build our customer base in the River District,” Jones said.

Their first day open at the new location was Wednesday, just as Phase 3 began.

The Vintage Boutique specializes in women’s wear from the 1960s and 1970s, though there is a small men’s section as well. The co-owners said they’ve received a warm welcome to the neighborhood so far.

“I think we have an established base and loyal customers who will follow us here,” Preston said. “With the COVID-19 pandemic situation, we’re always hopeful. We hope we bring some excitement downtown.”

Citing the multiple ongoing construction projects in the River District, along with The Vintage Boutique’s opening, Schwartz said the community should remain in good shape as long as consumers and businesses alike continue to abide by the safety precautions.

“If we do that and we can keep numbers low, then businesses will be able to continue reopening and serving customers,” she said. “I do believe that we’re going to rebound and we’re going to be OK.”

It’s the customers abiding by those precautions that may prove to be difficult.

Ehrhardt said people are getting “more restless, more frustrated with the guidelines,” which does not bode well for the health of businesses or the community at large.

At least a month has passed since the results of a consumer confidence survey — distributed by the RDA, the city of Danville and the chamber of commerce — came in and showed that 91.92% of the 334 respondents were either “slightly concerned” or “very concerned” about the economy. The same survey showed that respondents would overwhelmingly be willing to visit dine-in restaurants (34.14%), retail shops (48.04%), salons and barber shops (52.71%), gyms (24.62%) and religious institutions (44.11%) as soon as the stay-at-home order was lifted.

If precautions are not taken when customers return to these settings, the virus could potentially spread more and force businesses to close once again.

“I think while we absolutely want to support all of our businesses in every way we can,” Ehrhardt said, “we need to do that safely and thoughtfully.”

This includes wearing masks, keeping a safe distance from other shoppers and washing hands frequently. A failure to adhere to those stipulations could compound the struggles local businesses and their employees have already seen.

“We don’t have data as to who exactly counts toward that unemployment number,” Bobe said, “but we can anticipate that a large number would be our service and hospitality sector employees.”

As business owners continue to evaluate how much space they can open to customers in order to remain profitable, so too do customers need to weigh the risks of spending too much time in public settings. There is a very delicate balance, Ehrhardt said, between supporting local businesses and supporting overall community health.

“What we’re seeing with some of our small businesses is, ‘It’s not really advantageous for me to open until I can serve X many customers or have X many clients in,’” Ehrhardt said. “What is that tipping point for them? Phase 3 is probably that tipping point, and we’ll have to see what the consumer response is to that.”

“From a public health standpoint, things haven’t changed. Just because you want something to go away doesn’t make it so.”

president and CEO of the Danville Pittsylvania County Chamber of Commerce

Due to slowdown of aerospace industry, BGF to delay construction and move to Dan River Region's Cyber Park

BGF, which announced in October 2018 it would relocate its headquarters to the Dan River Region and bring 65 new jobs, has postponed its plans…

On Thursday morning representatives from Hard Rock International as well as the local business leaders behind the project unveiled a three-dimensional model of the proposed Hard Rock Bristol Hotel and Casino at the former Bristol Mall.

The Nana Karen’s Cruisin’ Kitchen food truck has been serving up meals at breweries, festivals and job sites in the Dan River Region since 201…

Originally poised to ban them, Virginia legislators allowed so-called skill games to be placed across Virginia to raise revenue to help businesses hurt by the coronavirus pandemic slowdown.

Roslyn Preston, a co-owner of The Vintage Boutique, works behind the counter on Wednesday, the shop's first day at its new location in the River District.

Sarah Gibson took advantage of two different grants from the city to help keep the Lizzy Lou Boutique open during the pandemic.

Lisa Jones, co-owner of The Vintage Boutique, which just opened at 214 North Union St., helps a customer on Wednesday.

Co-owners of The Vintage Boutique Roslyn Preston (left) and Lisa Jones (right) pose with Barry Koplen on the opening day of their shop, which takes over the old Abe Koplen Clothing Co. location at 214 North Union St.

The Vintage Boutique specializes in women's clothing and accessories from the 1960s and 1970s.