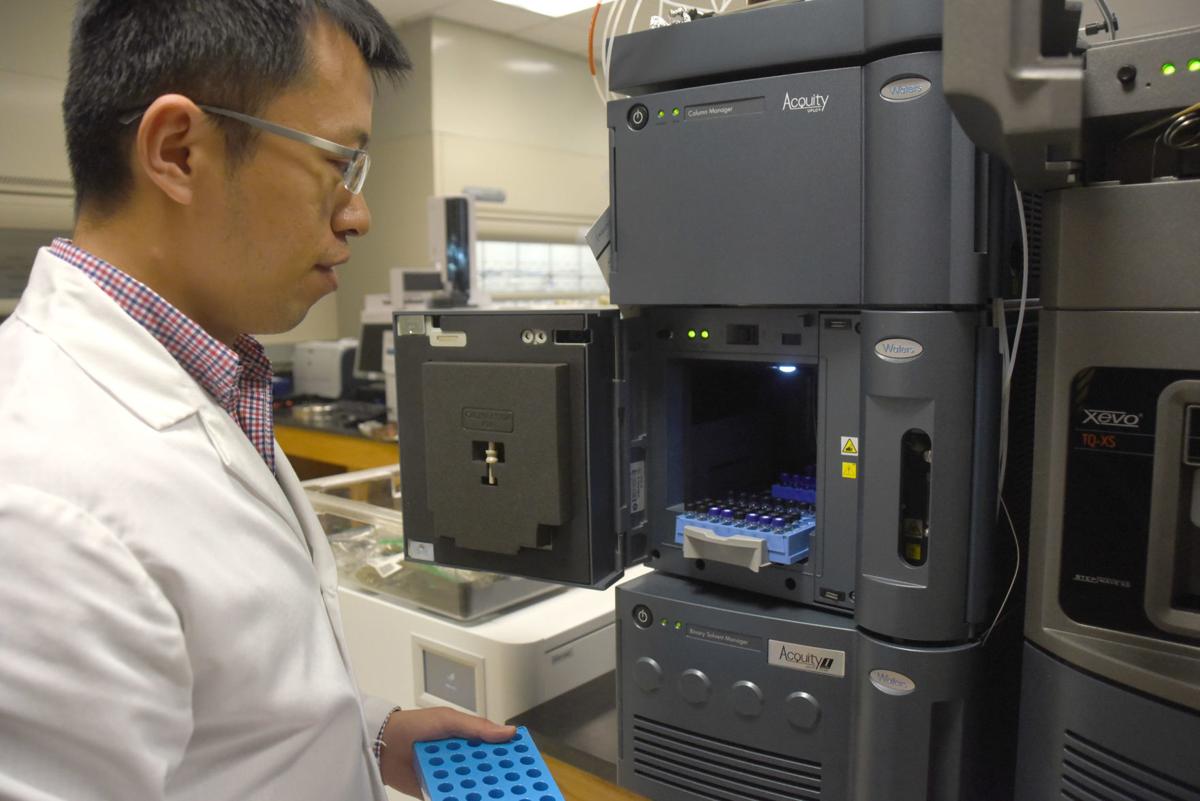 Yimeng "Jack" He, an analytical chemist and lab manager at the Institute for Advanced Learning and Research, opens the door to a mass spectrometer that can examine 96 samples of hemp at once. Before it can be analyzed, the plant must be dried, ground up, and converted into a liquid form. 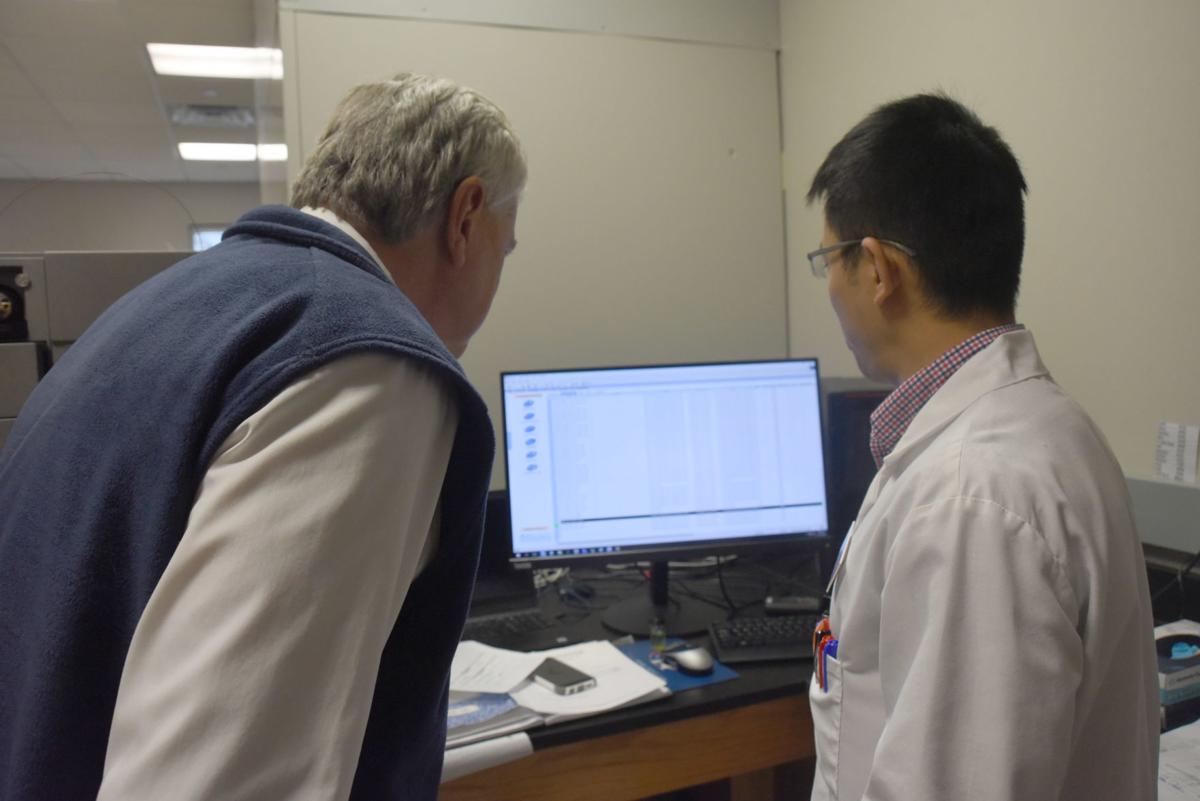 Analytical chemist and lab manage Yimeng "Jack" He and Mark Gignac, executive director of the Institute for Advanced Learning and Research, examine test results on the computer screen in the lab at IALR.

Though some of the more than 16 reported acres of industrial hemp planted in Pittsylvania County still is in the ground waiting to be harvested, growers and industry specialists already are learning some lessons from this year.

Producers are hoping it can serve as a cash crop and tobacco replacement. However, the financial viability still is in question, as buyers still are conducting tests that ultimately will determine the price points.

“It was a big learning curve this year,” said Bob Harris, a Pittsylvania County farmer who grew hemp and as of now is still unsure of the net results. “We learned a lot about what not to do.”

While the lessons of this year — such as fertilization methods and how the plants respond to drought stress — are valuable, Barts said it will be a while before area growers understand the full extent of what they’re dealing with.

“The ’19 growing season was about understanding the questions that need answering,” Barts said.

Not only is each crop unique and nuanced, but each growing season presents different challenges for farmers to face.

Danville’s Institute for Advanced Learning and Research played an active role with hemp growers in the region by hosting educational seminars, a hemp summit and serving as one of the primary testing centers in the area.

This growing season, which started in June and July and is in the latter stages of harvest now, the Institute has worked with 120 growers throughout the region.

With regulation limiting the amount of tetrahydrocannabinol — or THC, which is the part of marijuana that makes someone high — to 0.3% and the profit margins hinging on the concentration of cannabidiol, or CBD, in the plant, proper testing is extremely important.

Industrial hemp has a variety of uses, but the Pittsylvania farmers growing it are focusing on harvesting CBD, which occurs naturally in the flowers of the female plant and has been used primarily for pain relief.

Hemp growers want to harvest their plants with as much CBD as possible — a minimum of 6%, with 10% meaning decent profits, Gignac said — while remaining under 0.3% of THC.

One of the primary difficulties faced this year was the lack of standardization in the testing, which resulted in each lab providing a different analysis of the same plants, Harris and Gignac said.

With experience working in the pharmaceutical field, Yimeng “Jack” He, an analytical chemist and lab manager at the institute, has worked hard to develop an efficient hemp testing methodology that will yield accurate results. Part of that process involves drying the samples growers bring, grinding it into a consistent powder and converting it into a liquid form that can be tested.

“The industry as a whole should have a consensus in the testing methodology,” He said.

At the institute, He tests the solutions in a state-of-the-art liquid chromatography–mass spectrometry system that separates each element of the solution and measures its chemical composition.

“This is a very automated system that eliminates a lot of human error,” He said.

Another problem, Gignac said, was the lack of contracts between buyers and sellers agreeing on a third-party to test the chemical makeup of the crop — since that is what determines the price.

“We want to be that third party independent lab,” he said.

At the end of October, the United States Department of Agriculture opened a public comment period on the establishment of the a variety of proposed hemp regulations, including testing standards.

Across the state of Virginia, producers planted 1,437 acres of hemp, according the Farm Service Agency November acreage report. Sixteen of those were in Pittsylvania County, while Brunswick, Hanover and Mecklenburg producers each planted upward of 200 acres.

Until tests are completed and payments made, a lot of questions linger.

“A lot of the questions that we had going into the season still remain unanswered,” said Barts.

“We’re just going to have to wait a couple more years,” added Harris. “We got to have something. The tobacco industry is just dying … so hopefully this will be a viable alternative.”

How to invest your tax refund wisely

Why Is Dogecoin Trading at New All-Time High?

Why Is Dogecoin Trading at New All-Time High?

Garrett Shifflett and Ross Fickenscher, who brought Pemberton Lofts, The Continental, Ballad Brewing and other projects to the River District,…

Virginians are buying more alcohol. A new tool aims to spot the potential for misuse.

A company has created an alcohol assessment tool based on work out of Virginia Tech's Roanoke research institute that could help physicians determine patients' risk for misuse without ever asking them how much they drink.

Hiring is underway for cashiers, hostesses and servers.

It's expected the program will accept applications later this month.

Closing On A House? Here’s How Long It Takes

As a borrower, waiting for closing can feel like agony—especially if you’re trying to close on a house and you’re ready to move, or if you urgently need the savings a refinance will give you. Throughout most of the closing process, you’re waiting on other people, and you often don’t know how far along they […]

Yimeng "Jack" He, an analytical chemist and lab manager at the Institute for Advanced Learning and Research, opens the door to a mass spectrometer that can examine 96 samples of hemp at once. Before it can be analyzed, the plant must be dried, ground up, and converted into a liquid form.

Analytical chemist and lab manage Yimeng "Jack" He and Mark Gignac, executive director of the Institute for Advanced Learning and Research, examine test results on the computer screen in the lab at IALR.