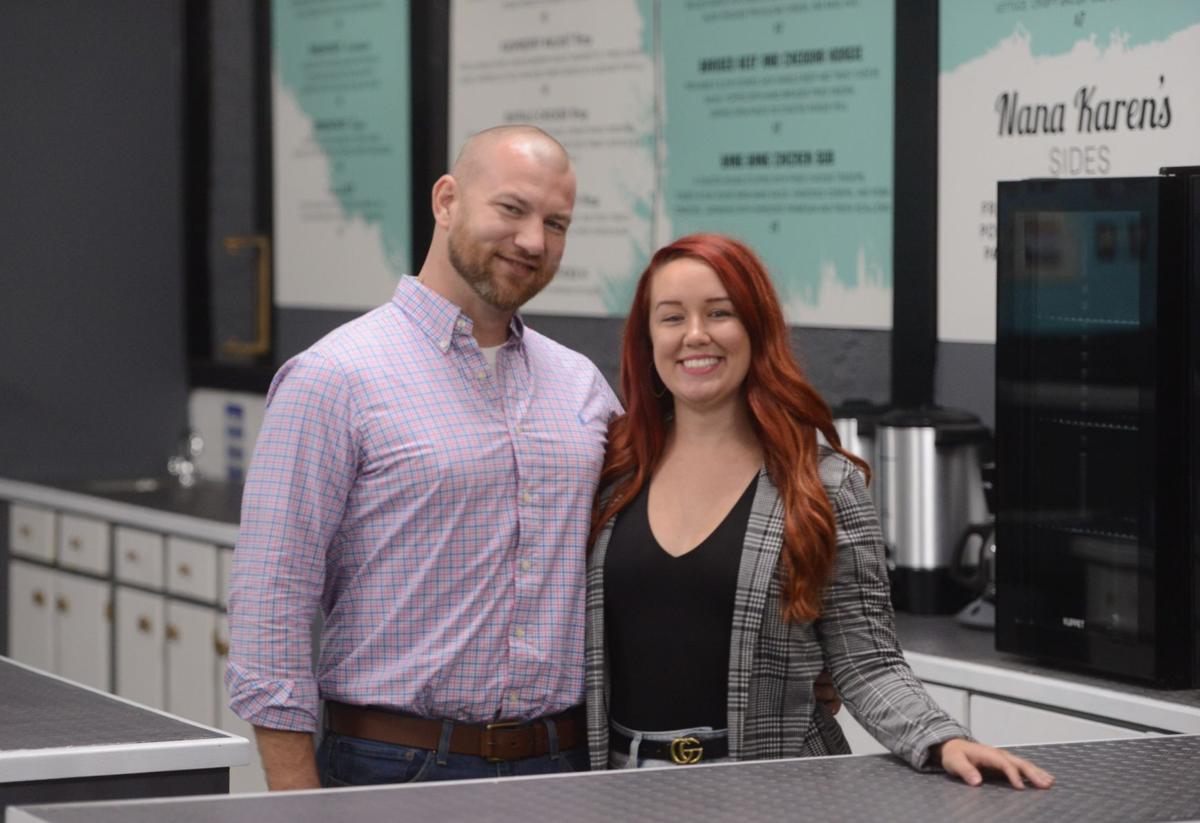 Nana Karen's on Main owners Dustin Haberer and Katie Inman stand behind the counter of their new restaurant at 547 Main St. in Danville on Wednesday. They hope to open by the beginning of October. 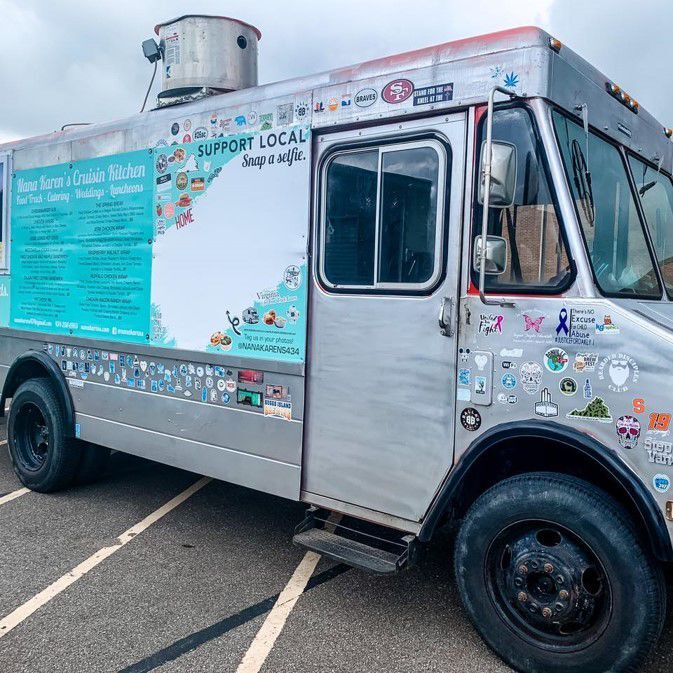 The Nana Karen's Cruisin' Kitchen food truck has been a mainstay at breweries and Dan River Region events since 2017. 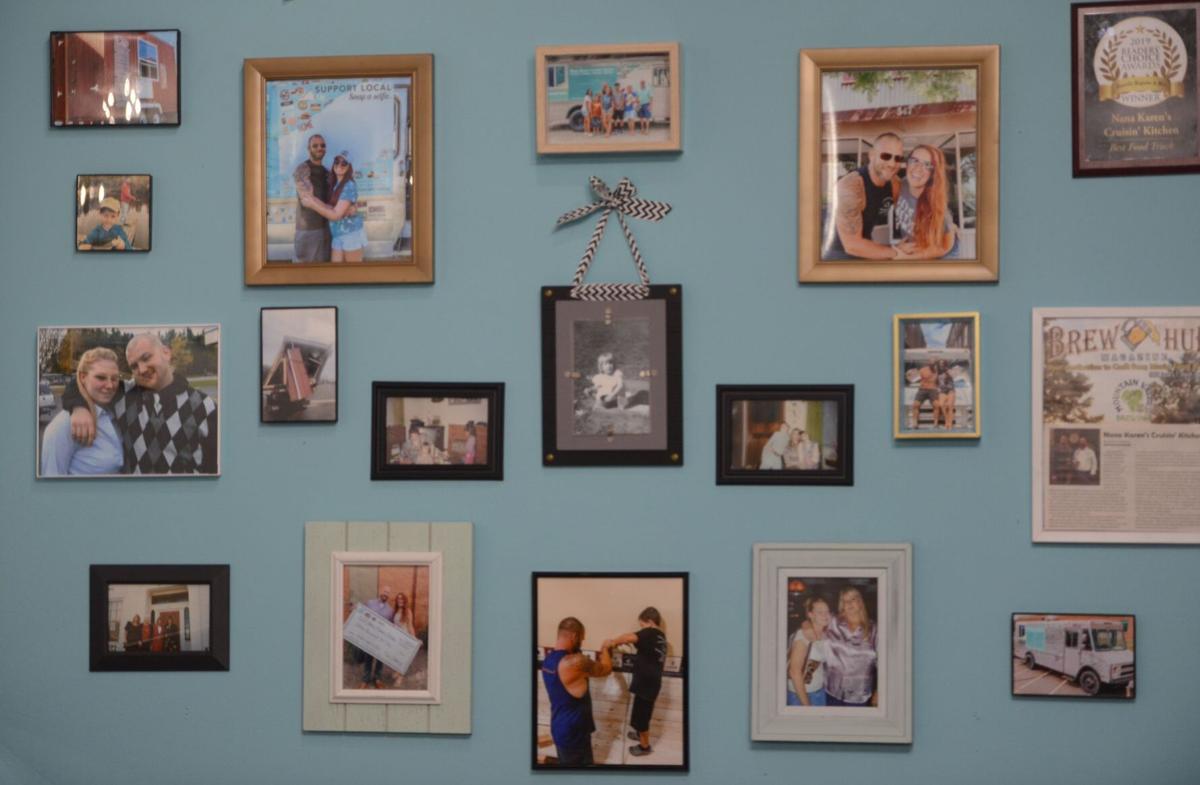 The back wall of Nana Karen's on Main features photos of family and of how the Nana Karen's Cruisin' Kitchen food truck has grown since 2017. 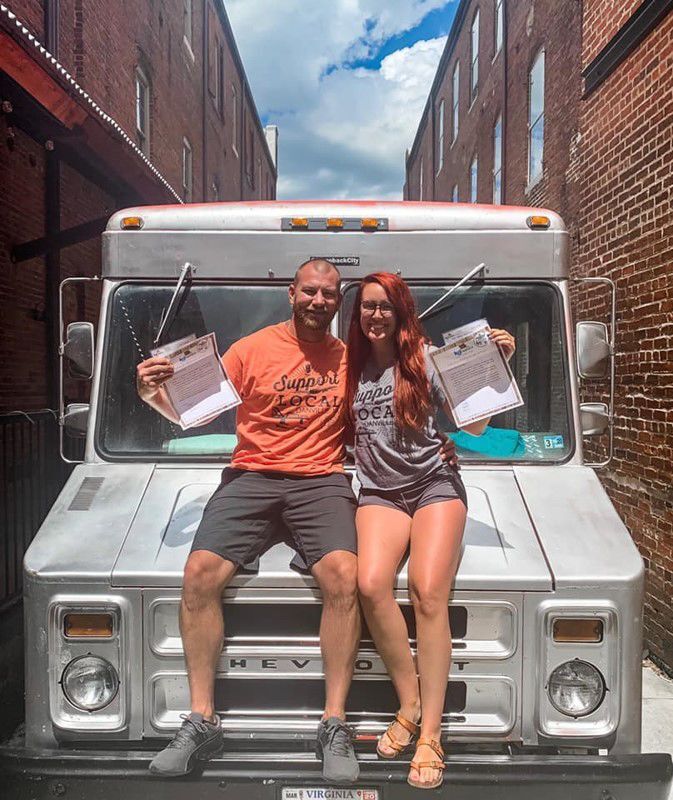 The Nana Karen’s Cruisin’ Kitchen food truck has been serving up meals at breweries, festivals and job sites in the Dan River Region since 2017, all the while showcasing a menu inspired by owner and chef Dustin Haberer’s late mother.

This fall, Haberer will reveal new menus dedicated to other members of his family, but the kitchen will no longer just be on wheels.

The exact opening date for Nana Karen’s on Main has yet to be determined, but the restaurant extension of the food truck will take over the old Main Street Coffee Emporium location at 547 Main St. in Danville’s downtown.

The expansion of his business comes on the heels of realizing that he could only serve so many people in one day from a food truck.

“There was always a lot of business. This isn’t a saturated area for food trucks,” Haberer, 34, said. “It was getting to the point where I couldn’t meet the demand out of that truck.”

Haberer, a native of Syracuse, New York, who came to Danville about 15 years ago, is confident saying the restaurant will be open by the beginning of October, which is about the timeline he was hoping for when he started thinking of taking this step last fall.

Before opening the food truck, Haberer worked as an executive chef at the Institute for Advanced Learning and Research and various restaurants around town.

The food truck and the brick-and-mortar location will operate as separate businesses, partly due to logistical and financial reasons, but also because Haberer has entered into an equal business partnership on the latter with Danville native Katie Inman, 26, his girlfriend who also runs SOCIALITE Media Marketing in Danville along with a travel blog called Wine and Weekends.

“The timing just fell in our laps with my skills with social media and the marketing and his skills as a chef,” Inman said.

Haberer is hoping that by bringing Inman on board, he’ll be able to focus more on the food instead of the ancillary aspects of running a business.

“I made it what it is up until now, and she’s going to make it what it is in the future,” Haberer said. “I have a lot more faith in succeeding here because of her. We definitely make a good team.”

The couple had known each other for a long time before entering into a relationship earlier this year. They started dating around the end or March or the beginning of April, but they joke that they don’t know the exact date because that was during the lockdown time of the COVID-19 pandemic when nobody knew what day it was.

“It was back when everybody was hoarding toilet paper,” Haberer said with a laugh.

But soon enough they’ll have a restaurant to call their own. They’ve remodeled the interior of the space to mimic the color palette of the truck and its menu — gray and a seafoam green that borders on teal.

Nana Karen’s on Main will feature the same menu that made the food truck such a hit — including the always-in-demand catfish sandwich — but Haberer has also crafted a breakfast menu along with two others named after his father and his son from a previous relationship.

Just as the Nana Karen’s menu is meant to honor Haberer’s mother, who died in 2009 from liver cancer at age 49, the Papa Mike’s menu is inspired by foods that remind him of his father — a selection that includes a braised beef and cheddar hoagie and chicken and waffles with homemade twisted tea syrup. The Chase’s Place menu — with its fried tomato BLT and grilled mac and cheese sandwich — includes “upscale versions” of what his son likes to eat.

On the back wall are pictures of Haberer and Inman, along with other members of his family and the community that has been so welcoming to the food truck. The familial atmosphere shines through from the menu and the decorations.

“I remember the first time I met him it felt like I had known him for a while, and I think he does that with everyone,” said Kiersten Goodson, a co-taproom manager at Ballad Brewing, where Nana Karen’s has become something of a resident food truck. “We have people call almost every day asking if he’s going to be there, asking if he’s going to have his catfish sandwich. I think everyone’s super excited about [the restaurant].”

Haberer said he expects the normal operating hours to be from 7 a.m. to 3:30 p.m. on Tuesdays through Saturdays. That leaves the evenings open as time for the couple to relax or take the truck out to breweries or events. He said they might offer events or dinners at night at some point down the line.

When he first started his food truck, Haberer was “completely against” opening a restaurant because the food truck business offered higher profit margins due to lower overhead and staff costs. But he also couldn’t grow as easily. He’s excited by the premise of putting down some roots for the business he now shares with Inman.

“The restaurant seemed like the best idea for us,” he said. “Especially downtown, I don’t think this would have worked for us anywhere else. My clientele is here, the people that know our food are here.”

Fans of Nana Karen’s Cruisin’ Kitchen are also glad to see a more permanent presence in the area.

“I’ve seen him do his executive cooking and the food truck,” said Lee Herndon, also a co-taproom manager at Ballad, “and I know he’ll take both parts of that and create a cool environment with awesome food.”

Haberer said longevity would be a good indicator of Nana Karen’s on Main becoming a success, but he also hopes to see it become a recognizable fixture in the town he has made his home.

“If we’re making a positive contribution to downtown and our business is steadily growing and we can keep the doors open through the pandemic and through all that, that’s success for us,” he said. “We want to be a destination for when people come to downtown Danville. We love this city.”

Nana Karen's on Main owners Dustin Haberer and Katie Inman stand behind the counter of their new restaurant at 547 Main St. in Danville on Wednesday. They hope to open by the beginning of October.

The Nana Karen's Cruisin' Kitchen food truck has been a mainstay at breweries and Dan River Region events since 2017.

The back wall of Nana Karen's on Main features photos of family and of how the Nana Karen's Cruisin' Kitchen food truck has grown since 2017.