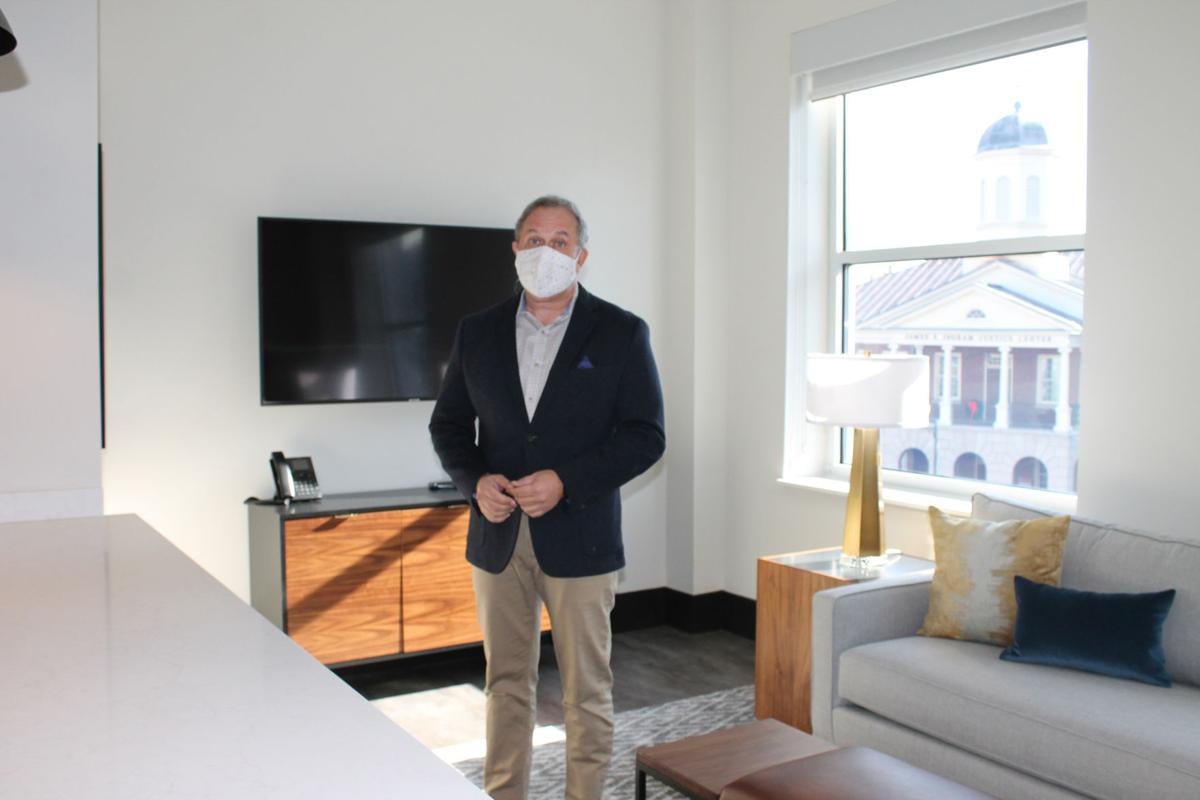 Bob McDonald with Marshall Hotel, who is overseeing operations and sales for the new boutique hotel, stands in the living of one of the long-term apartments. 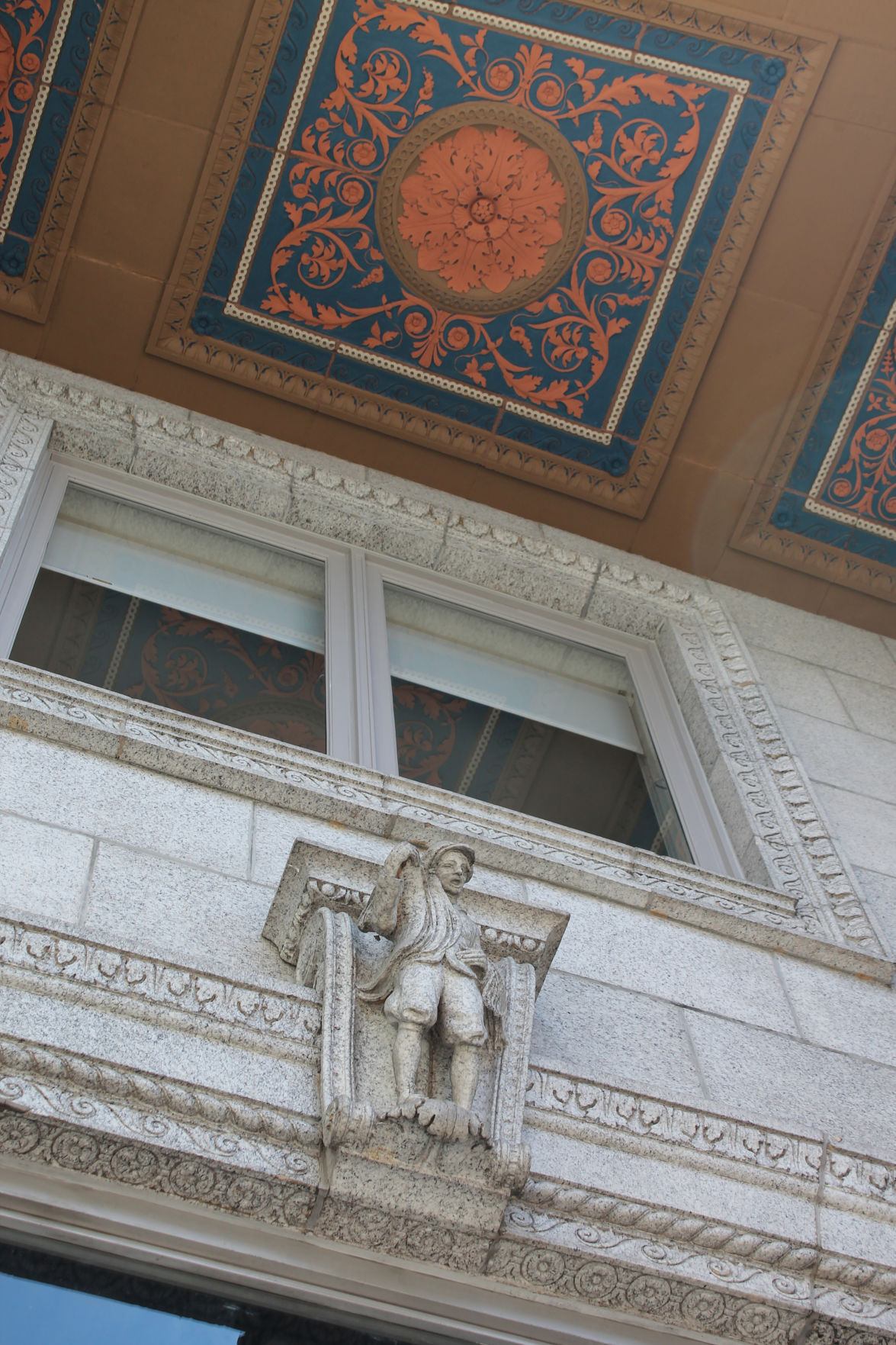 The Paper Boy statue stands guard over the door on South Ridge Street under the repainted ceiling. A disabilities accessible door is around the corner on Patton Street. 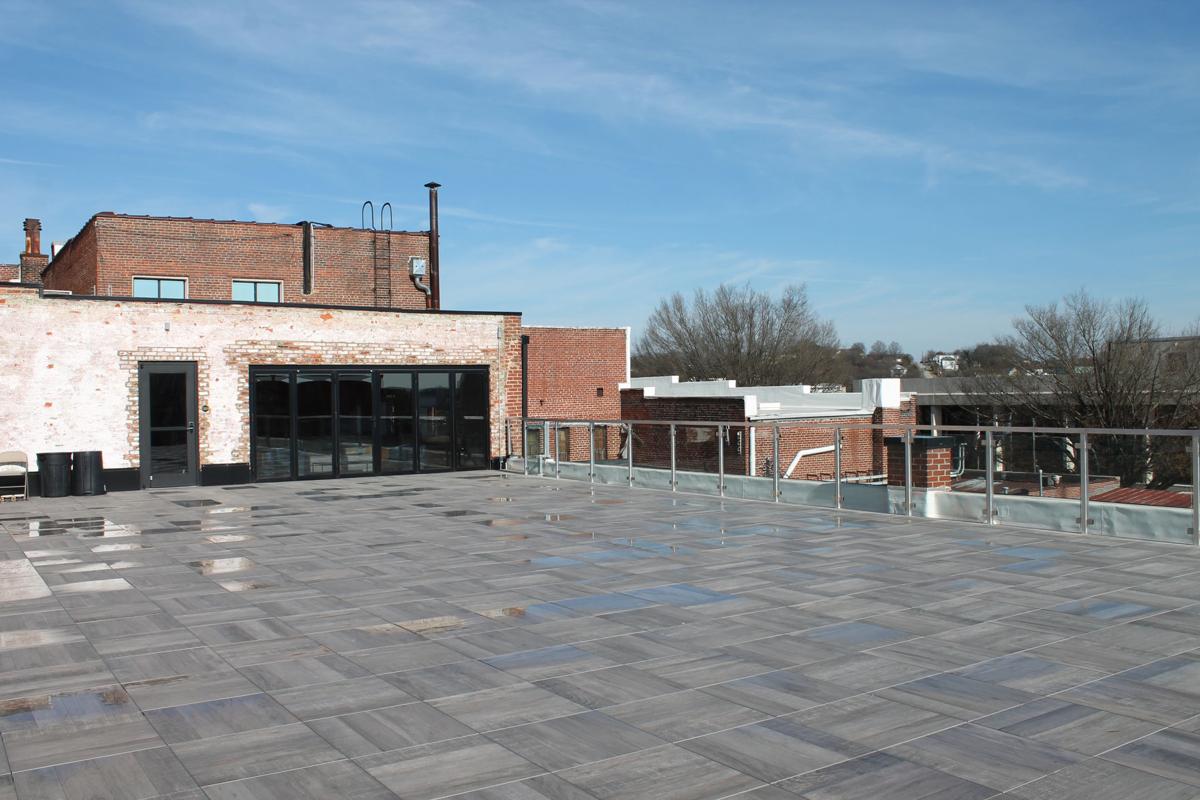 The roof has been renovated and will soon feature chairs and perhaps space heaters. A suite will open onto a private portion of the roof. 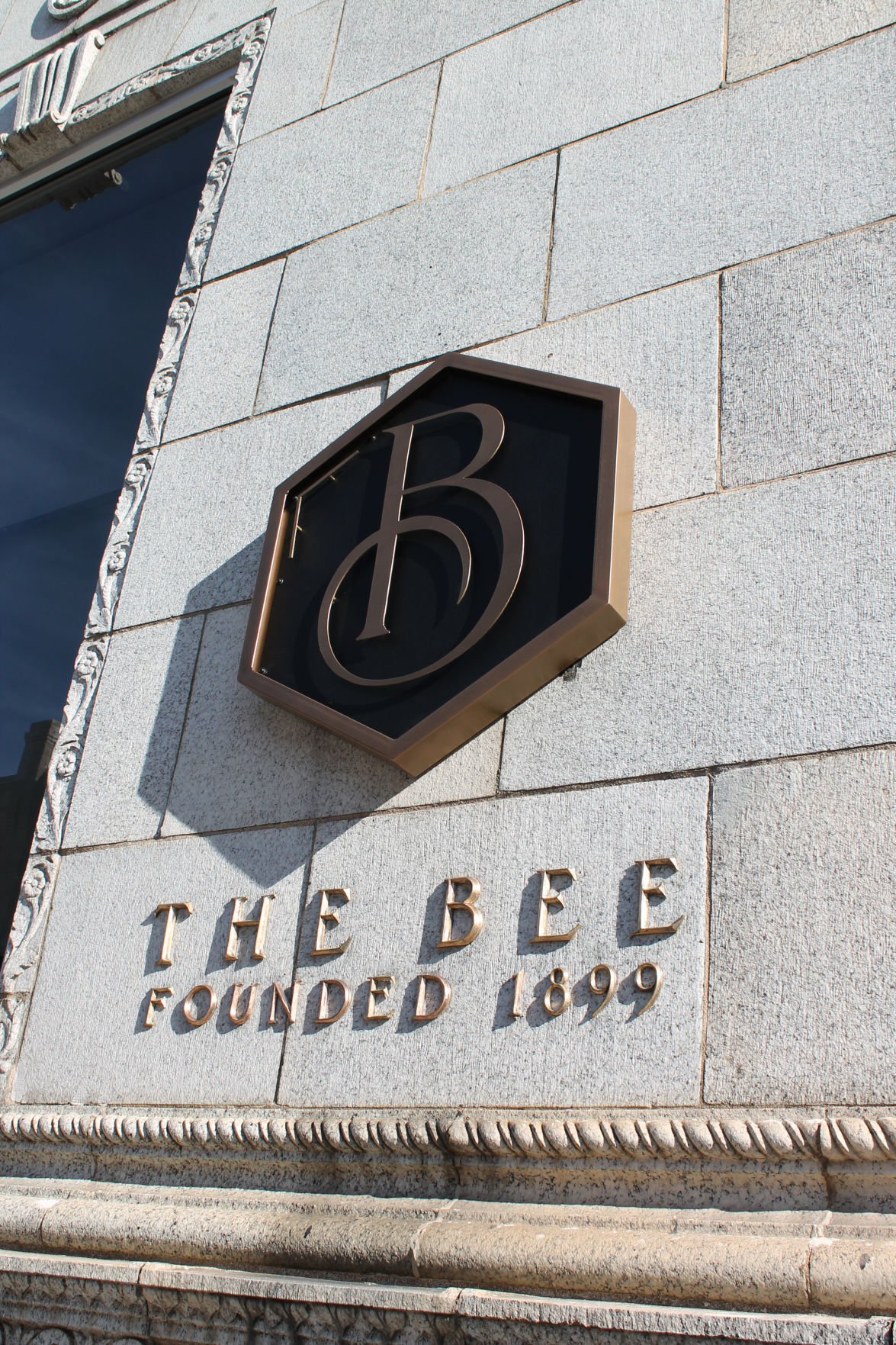 Memories of the past of the building are featured of the new logo of the boutique hotel. 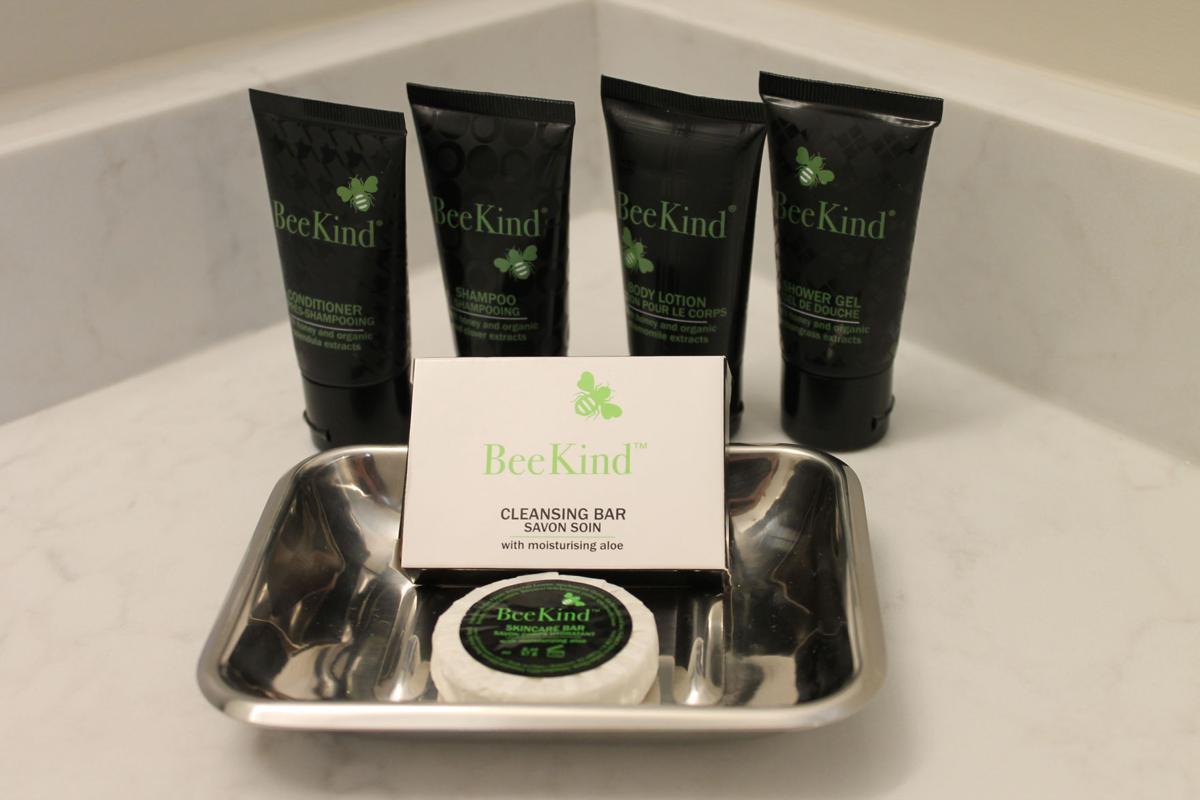 The company used "The Bee" throughout the details of the hotel.

BY SUSAN ELZEY Special to the Register & Bee

Danville’s newest hotel, The Bee, is abuzz this week with first guests and final construction.

Also called “The Honey Bee,” it's a nod to the building being the former site the Danville Register and The Bee newspapers, which were formerly separate papers.

Ed Walker, a Roanoke developer, purchased the buildings at 117-119 and 123 South Union Street downtown for the urban boutique hotel, which will horseshoe around a pocket park currently about halfway through its construction.

The right side of the hotel, the former Register and Bee building, is now open with 23 rooms. The left side of the hotel is only days away from completion. Originally it was planned to have the hotel complete in the spring, but a microscopic virus interfered.

“The pandemic really hit us hard in terms of construction and development,” said Brent Cochran, one of the principals in the project. “We can’t even do a grand opening, but we hope to have one in the spring. The pandemic impacted everything.”

The Bee has 47 rooms, including 25 standard rooms with king- or queen-size beds and 22 apartment-style rooms for guests staying longer. On Tuesday there were already two out-of-town guests renting rooms.

Cochran explained that a boutique hotel is not associated with any hotel brand, such as a Hyatt or Marriott, but are independently owned and operated.

Walker has had similar projects.

“We reconfigure old buildings with all the challenges and opportunities that present,” Cochran said.

With the repurposing of an historic building, each room is unique and some historic features are retained.

A metal spiral staircase that copy boys used to run up and down between editors and the printing press in the basement remains tucked away in an alcove. High ceilings in some rooms contrast with lower ceilings in others. Some windows offer an expansive view of the city, while others face a brick wall of the building next door.

The original terrazzo stairs remain in the building, although an elevator and a street-level entrance at 420 Patton St. offers disabilities access.

“We are required to incorporate historic construction, but the wide open space of the building gave us some leeway,” said Colin Glenney, assistant superintendent of the project.

He showed off the roof that has been renovated and will eventually offer seating. The largest suite of the hotel will have its own door opening onto the roof and its own private space.

“Each room or apartment is unique in style and shape. They are not cookie cutter rooms,” said Bob McDonald with Marshall Hotels, who is managing the operations and sales of the project.

The group described the décor of the rooms as “modern-contemporary with historic touches.”

McDonald has managed many other similar projects, including renovation of the historic Virginian Hotel in Lynchburg.

The people behind the project not only looked to the past — the pictures in the room include historic shots of Danville — but they are looking toward the future, specifically after the approval last month of the casino.

“We have built relationships recently with some of the principals of the casino, who said they were going to need hotels here,” said Cochran.

Susana Popu, The Bee’s general manager, has a goal of getting a base of long-term visitors into the hotel, such as visiting business and medical people.

“The location is amazing,” Popu said. “There are restaurants, parks, a small grocery store and the Riverwalk Trail close by.”

The hotel will not offer food and beverages at the present, but has plans to have coffee and pastries available post-pandemic.

Other pandemic accommodations include only disposable dishes and utensils in the apartment kitchens and a regimen of sanitizing and cleaning.

The project originally was going to include the South Union Street building next to the former Register and Bee building, but structural problems necessitated its removal.

A pocket park was created instead. Such a park is defined as a small, outdoor space usually surrounded by city buildings.

When it is finished, the park will have covered awnings, a fountain and tables where people can eat.

An 1800s granite wall will remain exposed and the park will be below street level. There will be steps and an elevator for accessibility under the Americans with Disabilities Act.

Diana Schwartz, executive director of the River District Association, said the association is “extremely excited” to have the hotel downtown.

“We are contacted on a regular basis by visitors that would like to stay overnight in the downtown area and can now do so at The Bee,” she said. “Short distance travel is currently the preferred method with fewer people flying and day/weekend trips being the new normal. We now have a gorgeous facility downtown to accommodate travelers and guests to the region.”

Walker and Cochran were the first to see the potential in the building, said Glenney. Walker has been behind historic redevelopment projects throughout Virginia, in areas including Roanoke, Salem and Buena Vista.

The project was funded with a $3 million loan from the Special Projects Loan Fund, which will be paid back to the Industrial Development Authority, the city’s land-buying arm, at 5% interest over two years.

The loan fund is a financing tool for high-impact historic redevelopment projects in the River District and was established to provide short-term financing through the IDA to spur the development of projects.

The cost of the project was initially estimated at $6.2 million, but came in at about $7.5 million, according to Cochran.

But it has all come together nicely, despite the obstacles.

“It was an exciting project. We had success even in a pandemic year,” said McDonald.

Elzey is a freelance writer for the Register & Bee. She can be reached at susanelzey@registerbee.com or 434-791-7991. Staff writer John Crane contributed to the article.

PennyWise Episode 5: How to Prioritize Your Debt Payments

PennyWise Episode 5: How to Prioritize Your Debt Payments

Nobody will fault you for front-loading your retirement contributions, but be aware of the limitations.

Project still on track for 2023 completion

The software is being used in six hospitals nationally.

Also, experts offer advice on how to prioritize your debt payments right now.

How Much Cash Should You Keep In The Bank?

Bank accounts can make paying bills and managing spending easier. And a savings account provides a convenient place to keep cash you may need to tap in an emergency. But how much money should you keep in checking and savings? Is it possible to have too much cash in the bank? Finding the right balance […]

Seeking to elevate its proposal to build a $517 million casino resort in Richmond, Urban One announced plans Tuesday to partner with several local businesses and give back $30 million in charitable donations and initiatives.

Bob McDonald with Marshall Hotel, who is overseeing operations and sales for the new boutique hotel, stands in the living of one of the long-term apartments. 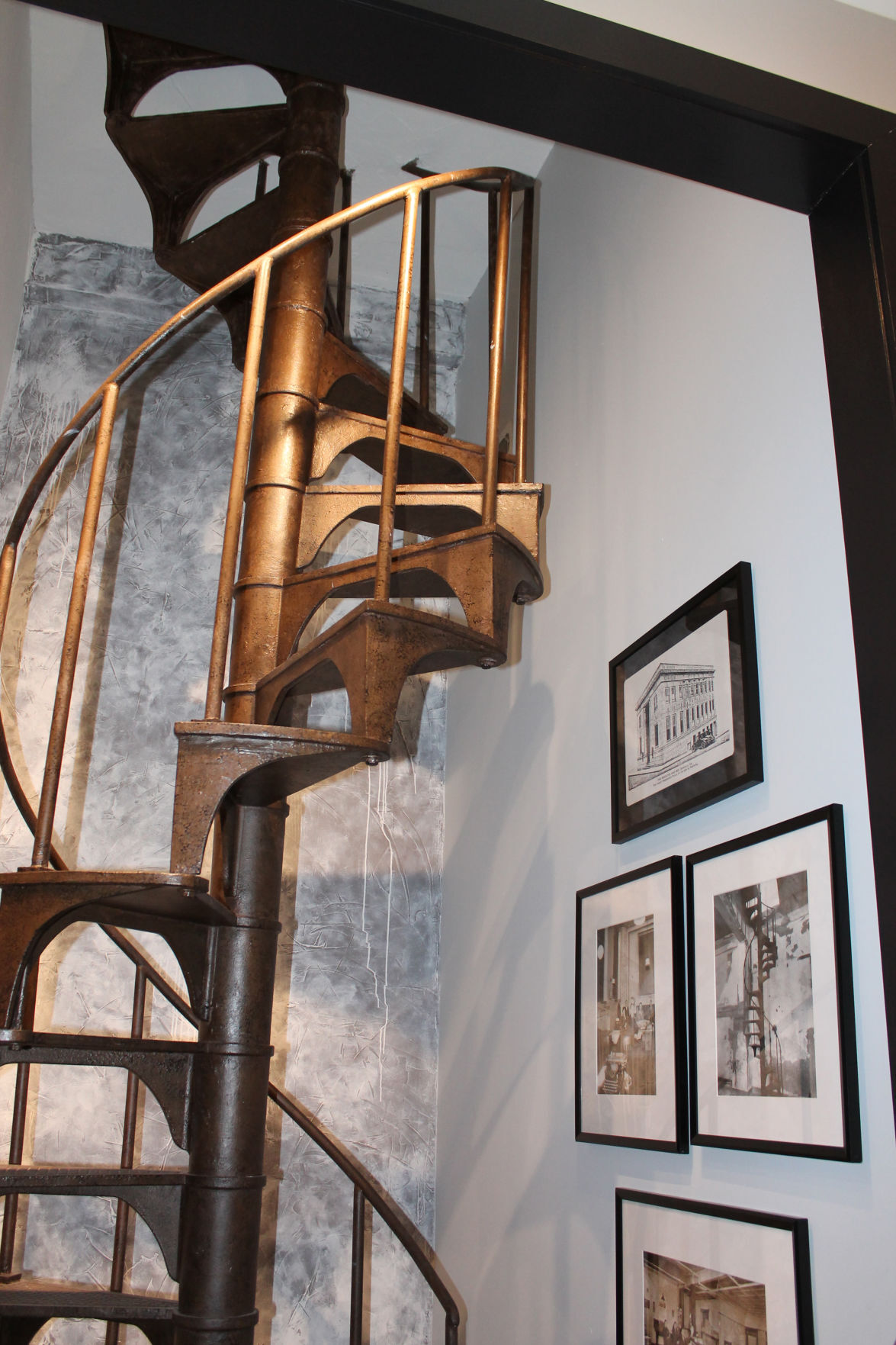 The original spiral staircase from when the building housed the Register and the Bee newspaper operations remains in an alcove. The wall is decorated with historic photos by local photographers. 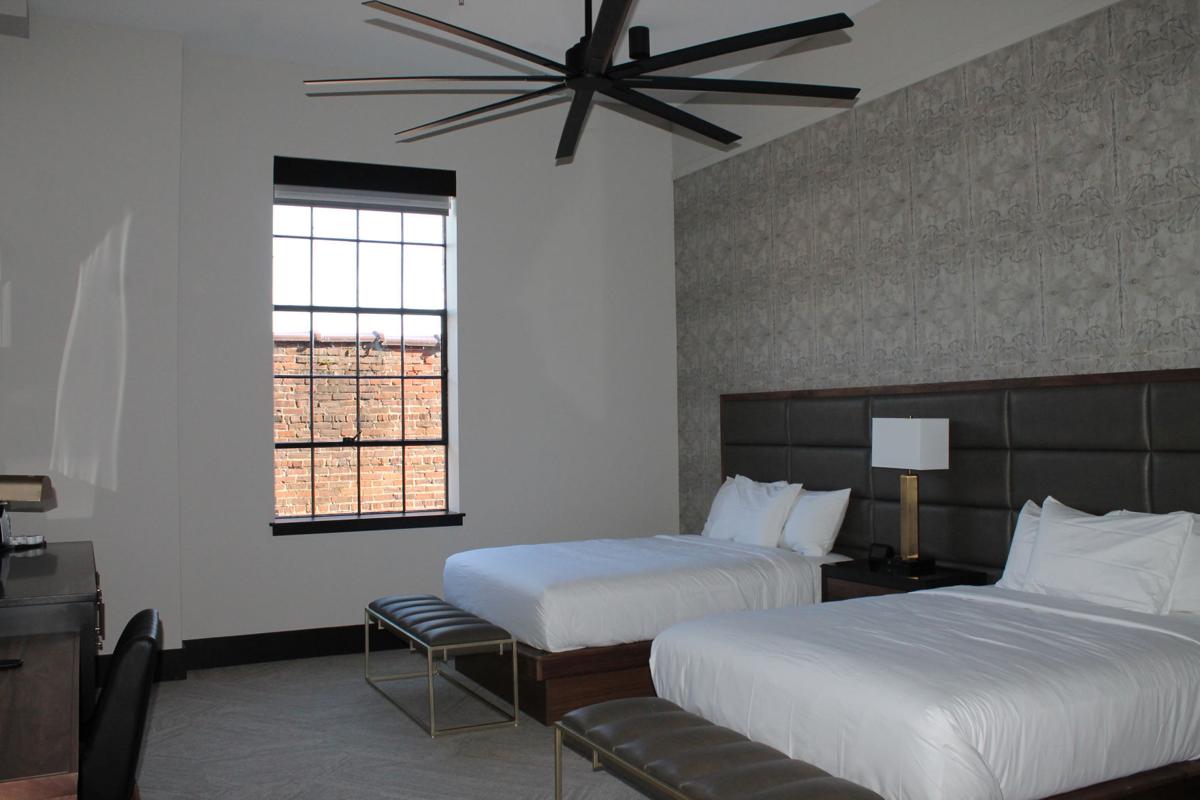 The Bee offers 22 apartment-style rooms and 25 standard rooms. Each room is unique. One room might look out over the cityscape while another faces an aged brick wall of the next building. 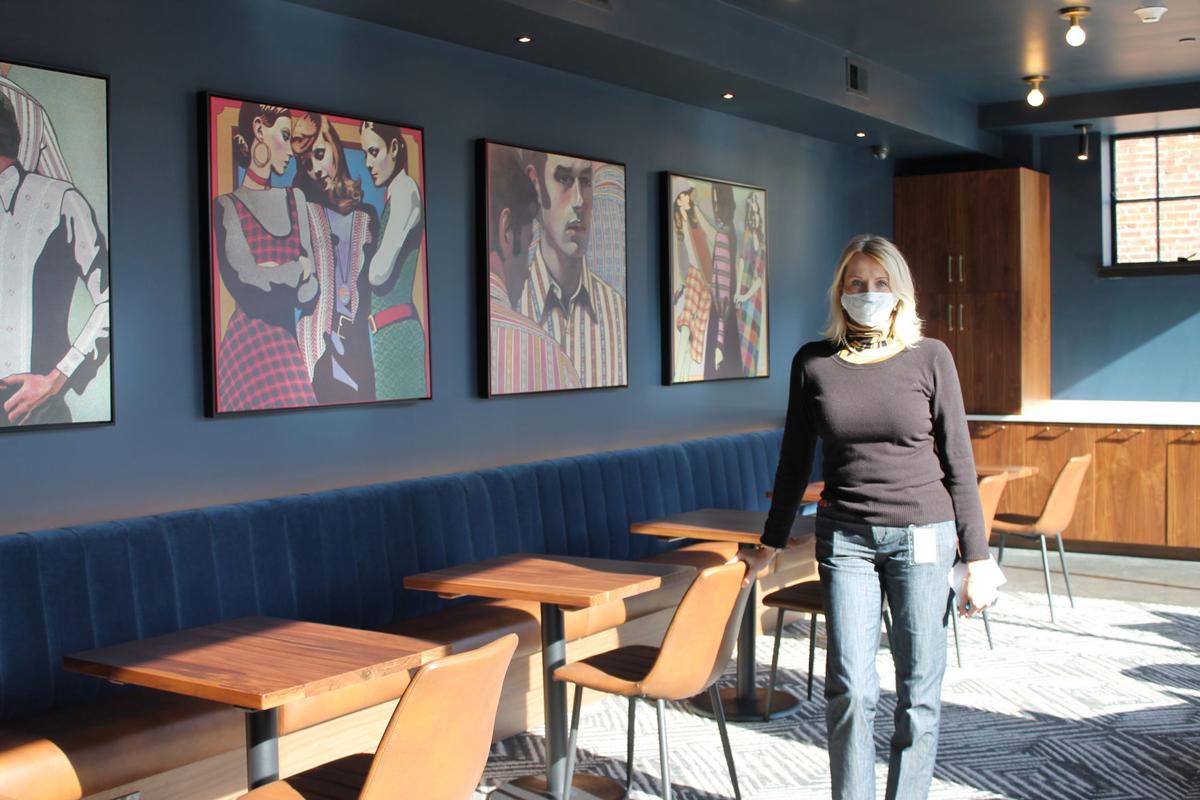 Susana Popu, general manager, shows off the room that will serve as a gathering place and post-pandemic will offer coffee and pastries.

The Paper Boy statue stands guard over the door on South Ridge Street under the repainted ceiling. A disabilities accessible door is around the corner on Patton Street. 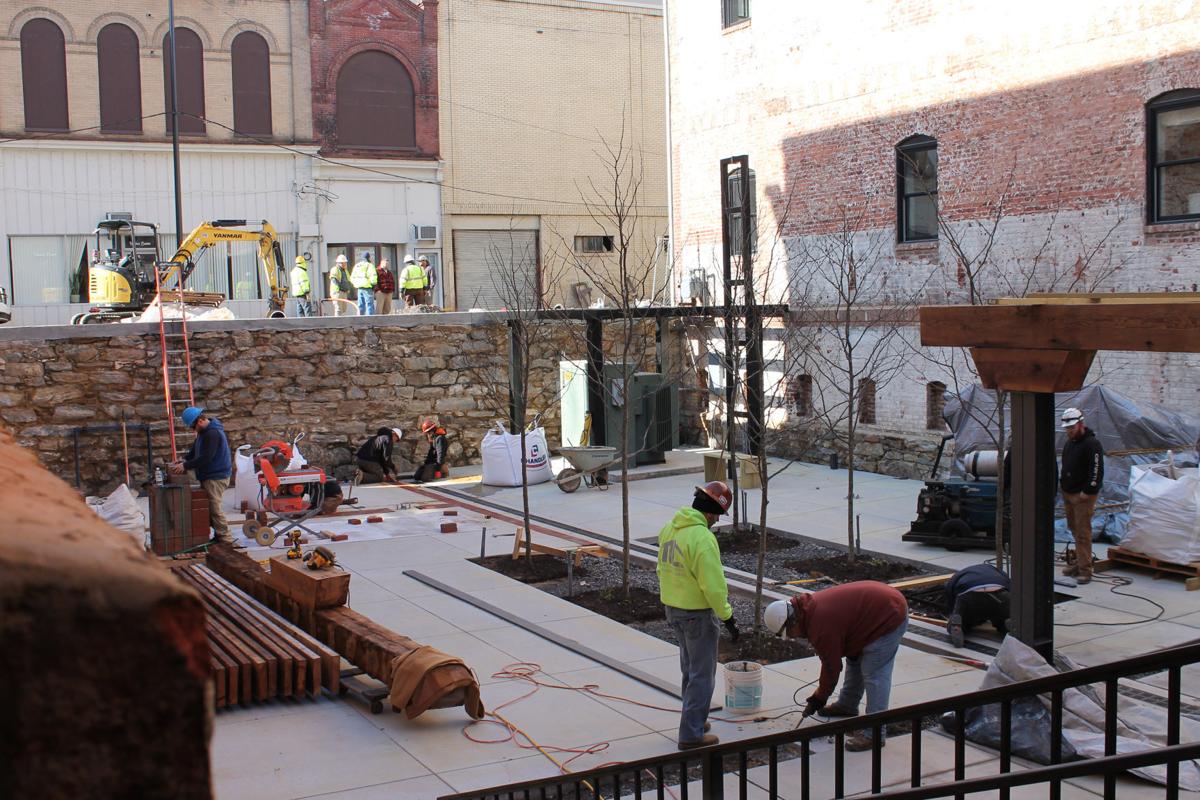 The Bee will horseshoe around a pocket park that will feature trees, tables and covered awnings. The below-street-level park will be reached by a staircase or a chair lift and features the rock wall original to the building that once stood there.

The roof has been renovated and will soon feature chairs and perhaps space heaters. A suite will open onto a private portion of the roof. 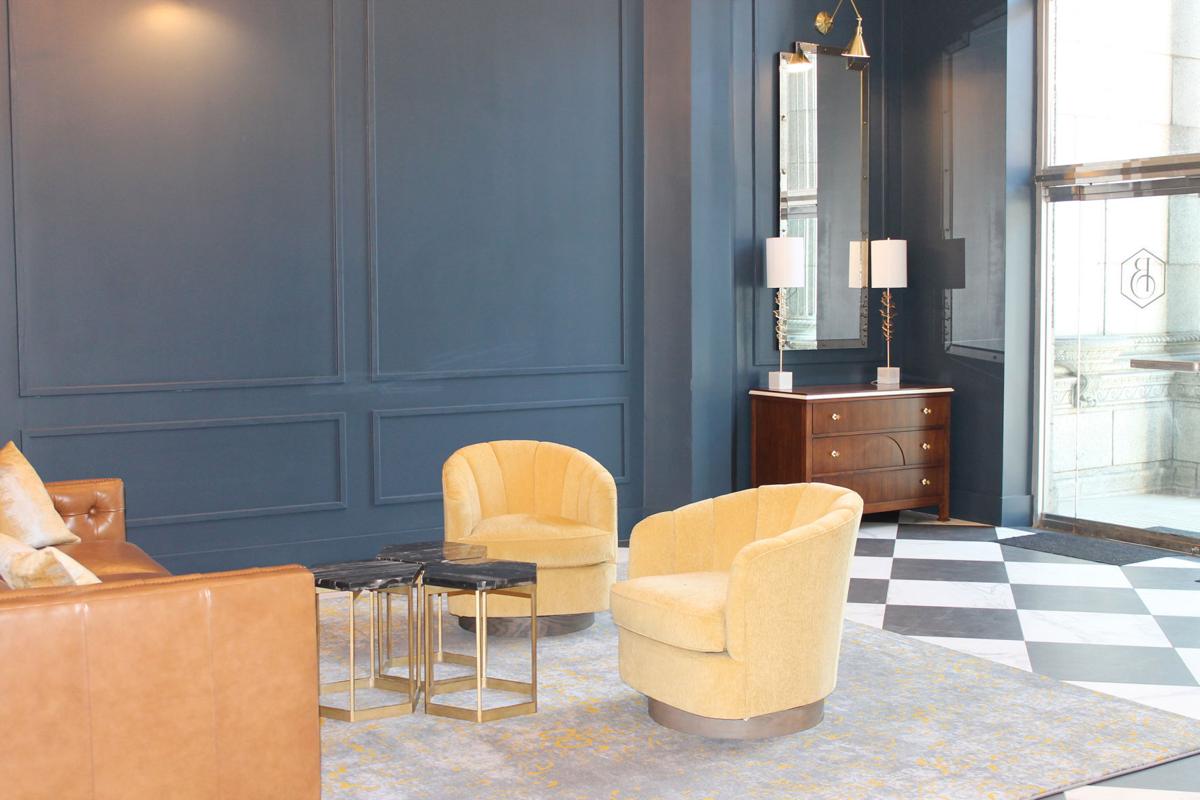 The decor for The Bee is modern contemporary with dashes of the historic, as shown in the lobby opening on South Ridge Street.

Memories of the past of the building are featured of the new logo of the boutique hotel. 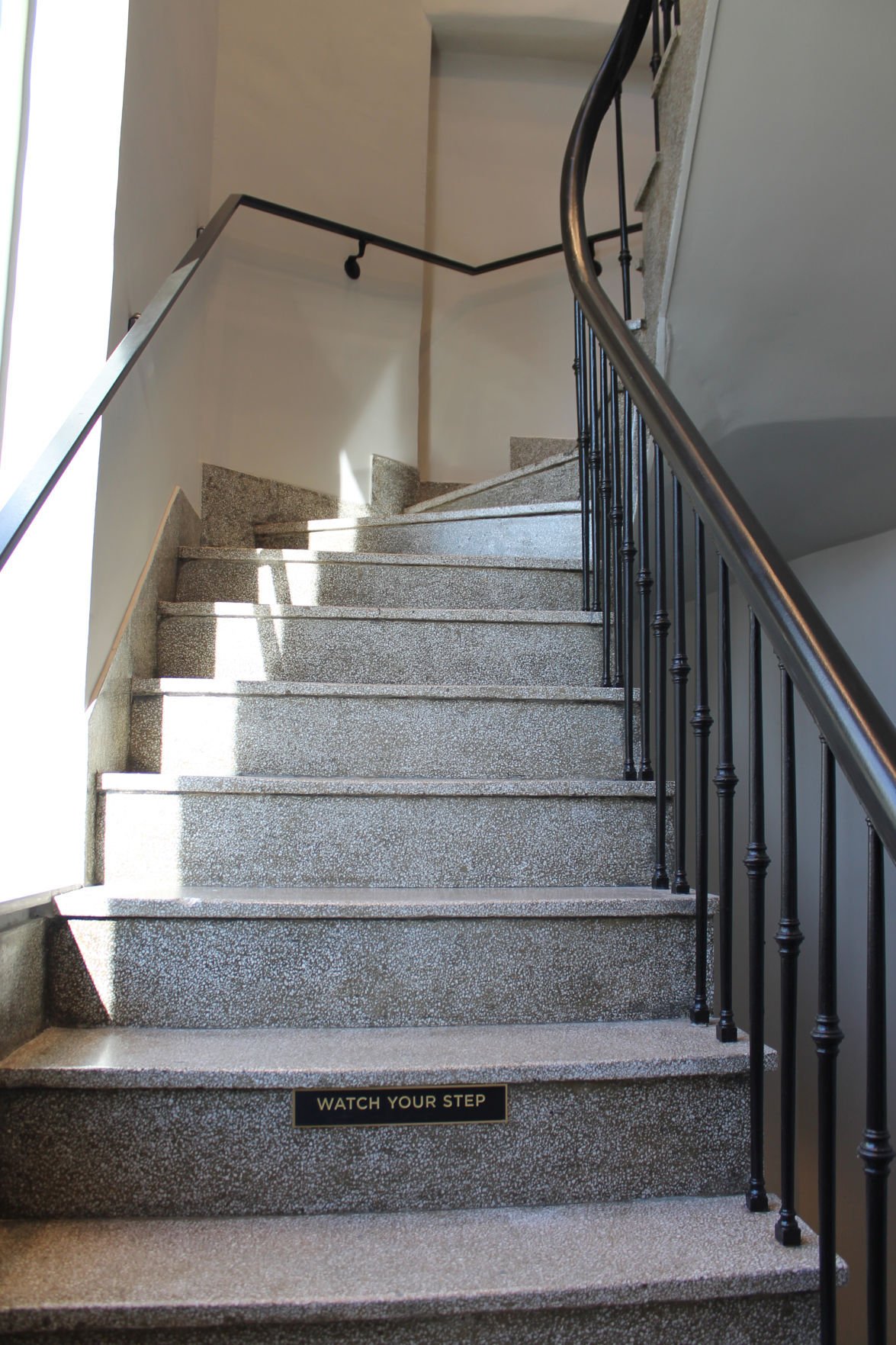 The original interior terrazzo stairs were kept in the building.

The company used "The Bee" throughout the details of the hotel.