Thanks for reading! Log in to continue.
Enjoy more articles by logging in or creating a free account. No credit card required.
Log in Sign up Subscribe
You are the owner of this article.
Edit Article Add New Article
You have permission to edit this article.
Edit

NBA Finals: Scores and updates as the Heat vs. Lakers tip off 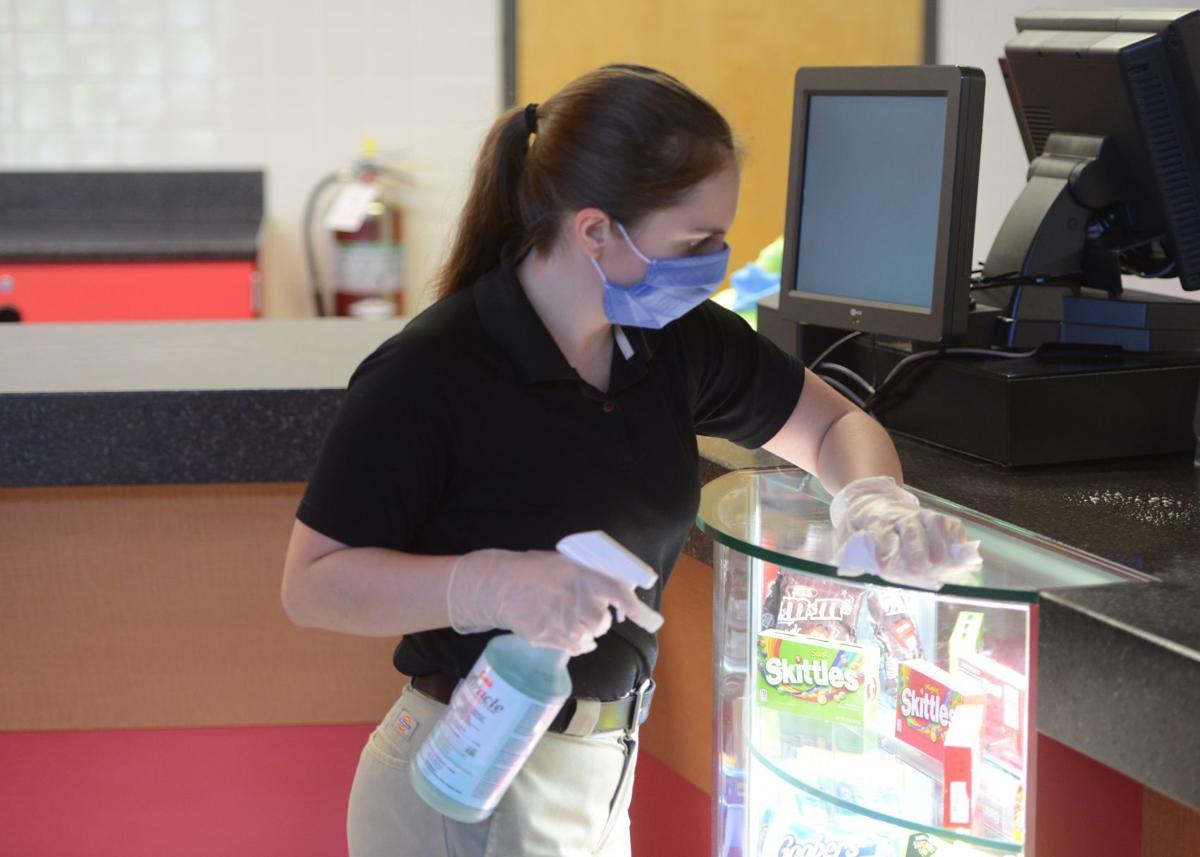 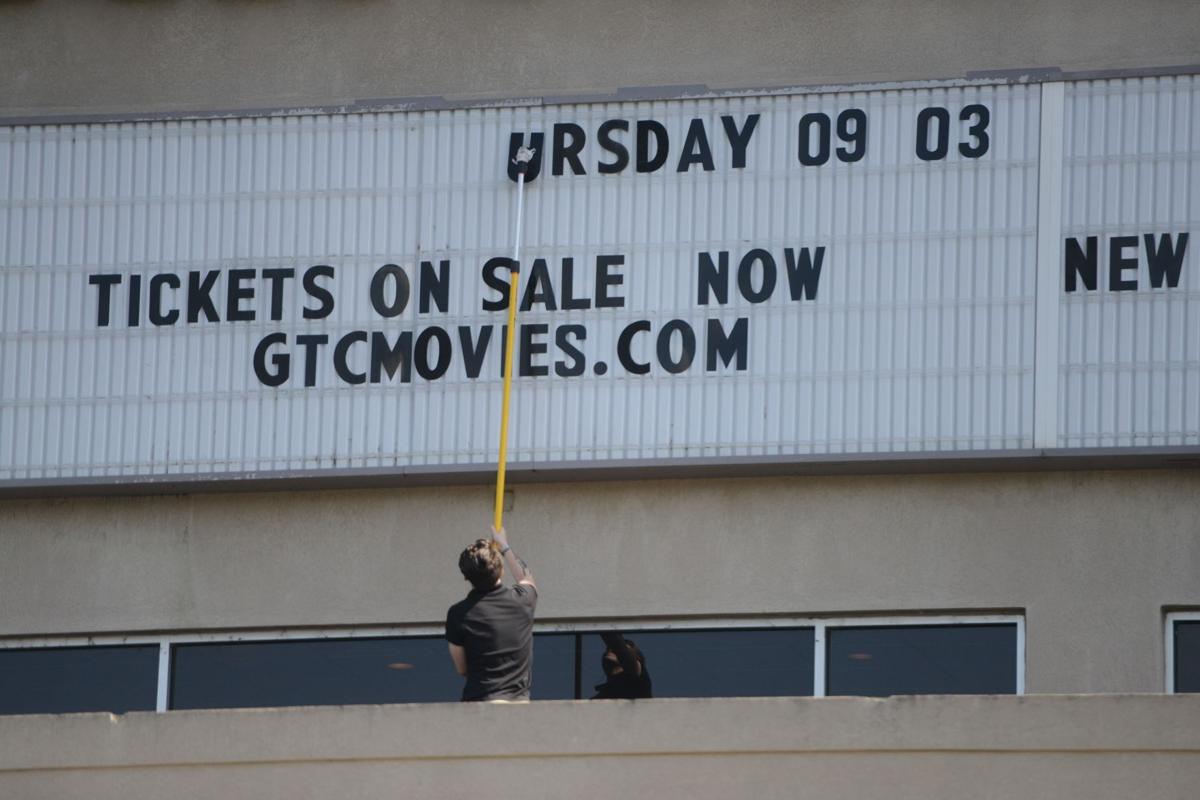 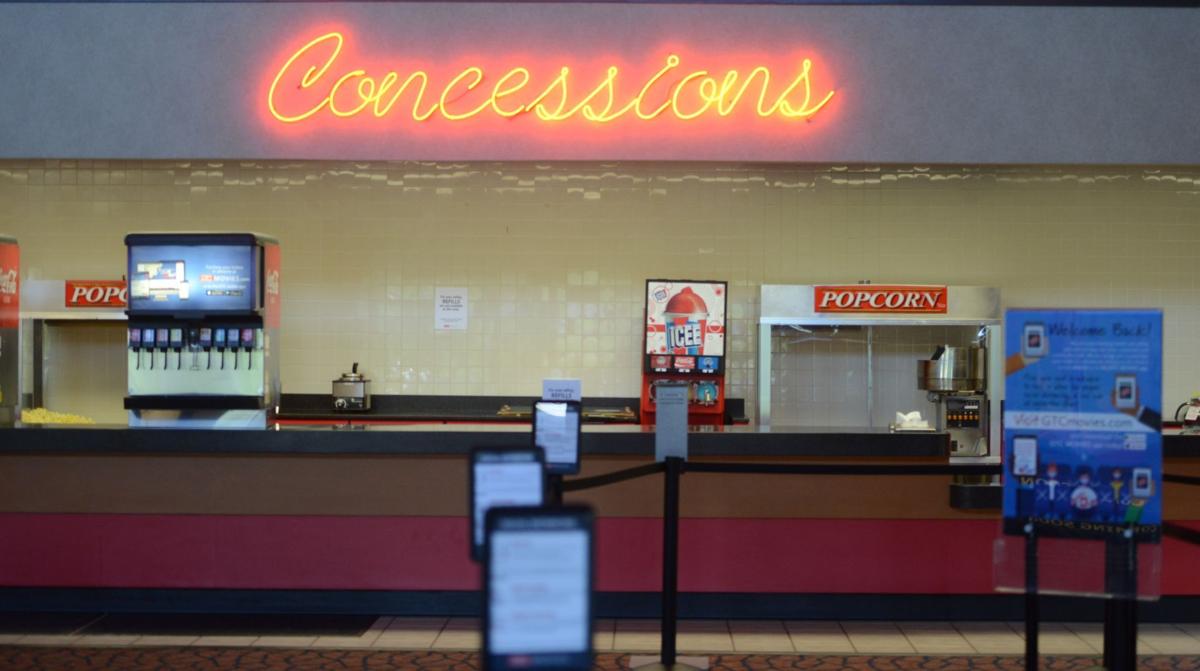 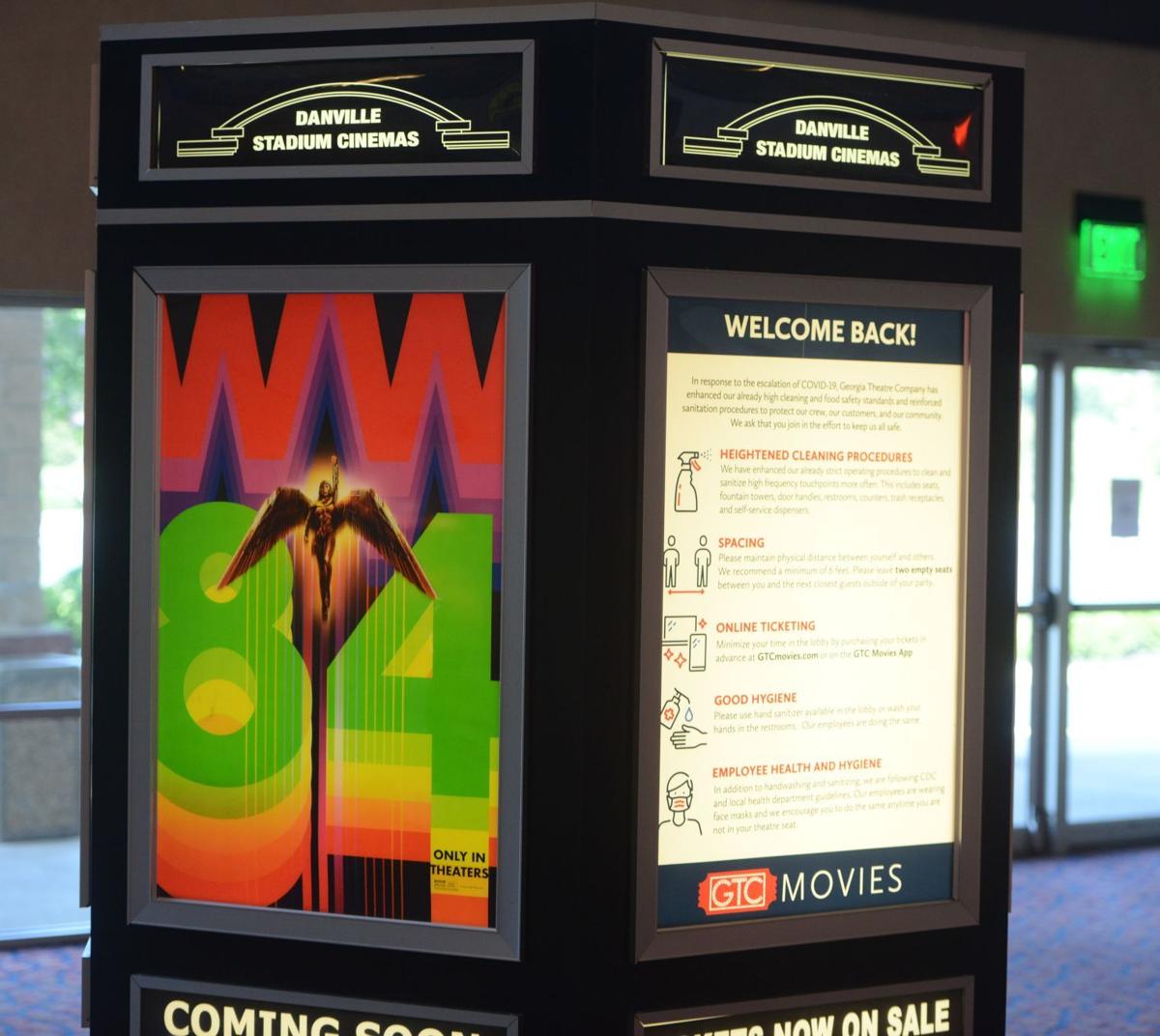 The lobby at Danville Stadium Cinemas features movie posters for upcoming releases alongside signs promoting health tips while at the theater. 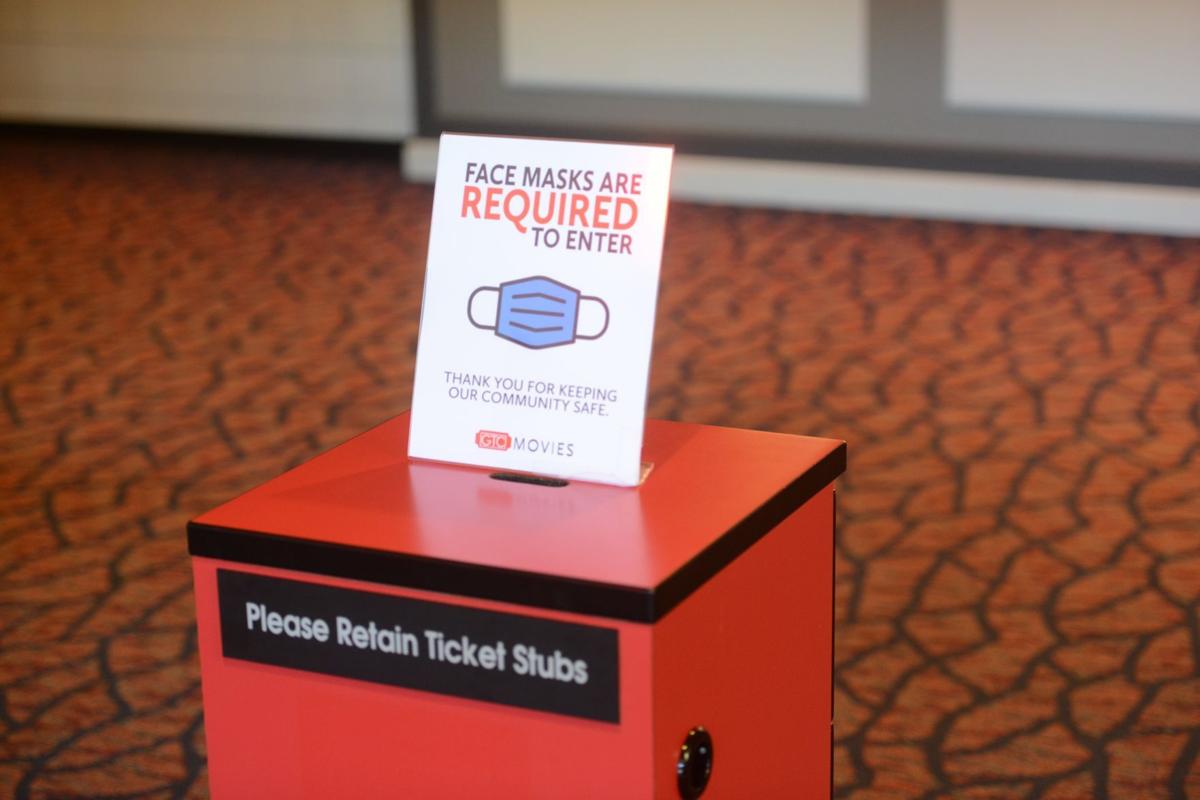 Masks are required for all guests when visiting Danville Stadium Cinemas. 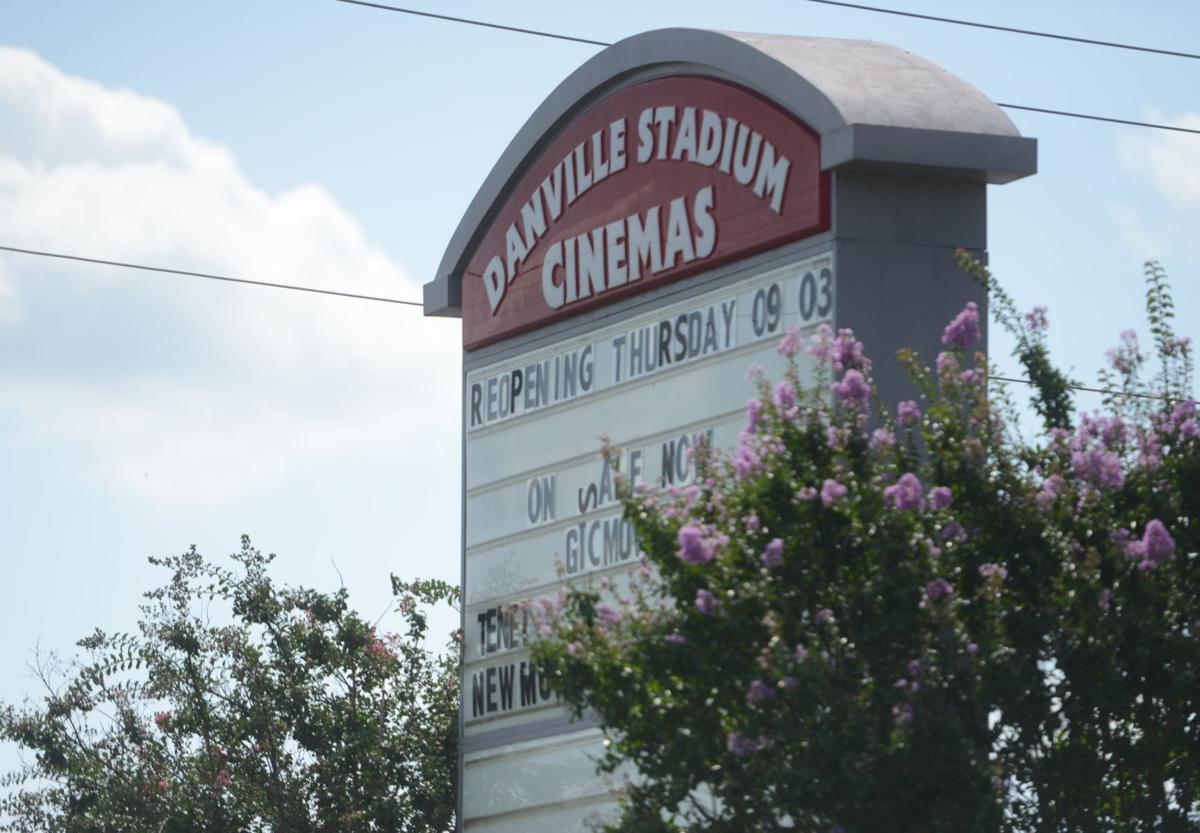 Danville Stadium Cinemas — the city’s 12-auditorium movie theater — reopened to moviegoers on Thursday following a five-month closure brought on by the COVID-19 pandemic.

The big screen's return didn’t bring back large crowds, but some patrons did come from far away to take in a matinee.

“Since all the theaters were closed in North Carolina this was the closest we could actually attend,” said Jose Dominguez, 21, of Burlington, who saw director Christopher Nolan’s new film “Tenet” with his younger brother and two other friends. “We had no idea this was the first opening.”

North Carolina Gov. Roy Cooper is expected to announce on Sept. 11 whether the state will enter Phase 3 of reopening, which would allow movie theaters to welcome guests again.

“But that’s a maybe,” said Guillermo Dominguez, 18. “We didn’t take any chances, so we just drove here.”

Hunter Dickerson, 24, of Reidsville, North Carolina, drove north with his fiancee, Brittney Coe, to see “The New Mutants,” a movie based on the Marvel comic book series. From a drive through Danville earlier in the week, they learned ahead of time that the theater would be opening again.

“We saw they were opening up Thursday so we thought we’d come here and watch a movie,” Dickerson said.

Face masks are required for entry to the theater, and social distancing is enforced in the lobby’s concessions line and in the theater. On the first day, though, social distancing wasn’t much of an issue. Dickerson and the Dominguez brothers said their respective groups were the only ones in their midday screenings.

Movie theaters and other entertainment venues across Virginia were permitted to operate with 50% capacity when Phase 3 of reopening went into effect in early July. But Georgia Theatre Company — which owns Danville Stadium Cinemas — elected to push back the reopening date for many of its locations due to a lack of major motion picture releases this summer, GTC President Bo Chambliss said Wednesday.

With the releases of “Tenet,” “The New Mutants” and “Unhinged,” a new Russell Crowe film, movie theaters now have a few options to present to customers looking to get back into the theaters.

“We have not had any business the last five months, so it’s great to get back to somewhat normal,” Chambliss said. “The biggest factor in deciding on a reopening is the release of new movies.”

Chambliss said the company thought of showing previously released movies as a way to entice crowds to return, but ultimately decided it wasn’t “financially viable.”

“You really need some first-run product to get some people coming through the door,” Chambliss said.

Danville Stadium Cinemas Manager Dustin Stewart wrote in an email that during the past few months he often ran into regular customers asking when the theater would reopen, so he’s excited that date has finally come.

“The theatre has not felt the same in the five-plus months we have been closed,” he wrote. “That being said, we look forward to giving patrons the much-awaited movie experience while maintaining safety, including proper social distancing.”

GTC encourages its customers to purchase tickets through the company’s smartphone app or online to eliminate a touchpoint at the venue. Customers reserve their seats during that process, and the computer system then blocks off two seats on each side of the party from being purchased to promote social distancing. Seats in every other row will not be available to keep parties separated.

Masks will be required at all times, except when customers are enjoying their concessions.

The Danville Stadium Cinemas staff has also posted numerous signs in the lobby to remind customers about the importance of social distancing and washing hands. Hand sanitizer stations are set up throughout the building, and the staff regularly disinfects countertops, door handles, the restrooms and other commonly touched surfaces.

GTC, which operates 25 theater locations in Georgia, Florida, South Carolina and Virginia, furloughed many of its hourly staff workers when the pandemic first forced venues to close in March. Chambliss said the company has been able to bring back most of those employees or hire others to fill spots vacated by employees who moved on to other jobs or otherwise didn’t return.

As Danville Stadium Cinemas reopens, Stewart said the theater is restoring its Flashback Series, where older movies can be seen on the big screen. Previously, the series only took place on Sundays and Wednesdays, but it will now run every day of the week, and ticket prices for those films have been reduced to $5. The theater is currently offering “Harry Potter and the Sorcerer’s Stone” and “The Goonies” in that series.

In the coming months, Stewart is hopeful that the releases of other films such as “Wonder Woman 1984” and “Candyman” will drive more customers to the theater.

Given the dearth of entertainment options in the past several months, Chambliss is glad to once again offer movies as an escape to a different world.

“There’s no better way to watch a movie than on the big screen,” he said, “and we’re looking forward to providing customers with the best moviegoing experience possible.”

10 famous pairs of brothers and sisters

Here are 10 pairs — or sometimes trios — of celebrity siblings.

50 Black actors who made entertainment history

From Hattie McDaniel to Chadwick Boseman, here's a list of 50 Black actors whose performances achieved milestones in different genres, waves, and decades of film and TV.

Country star Mac Davis, who launched his career crafting Elvis Presley hits and was inducted into the Songwriters Hall of Fame in 2006, has died at 78.

Here’s a collection curated by The Associated Press’ entertainment journalists of what’s arriving on TV, streaming services and music platforms this week.

These were the 100 most 'challenged' books of the past decade

Toni Morrison is on the list. So are John Green and Harper Lee. And John Steinbeck and Margaret Atwood. All wrote books that were among the most subjected to censorship efforts over the past decade.

Here's a look at what's arriving on TV, streaming services and music platforms this week.

Father of the Bride - Charles Shyer

MILAN (AP) — It’s been a season of disruption at Milan Fashion Week.

Pumpkin spice mac and cheese is coming to the U.S.

Movies in a Minute: 'The Empire Strikes Back' & 'Kajillionaire'

Movies in a Minute: 'The Empire Strikes Back' & 'Kajillionaire'

The lobby at Danville Stadium Cinemas features movie posters for upcoming releases alongside signs promoting health tips while at the theater.

Masks are required for all guests when visiting Danville Stadium Cinemas.