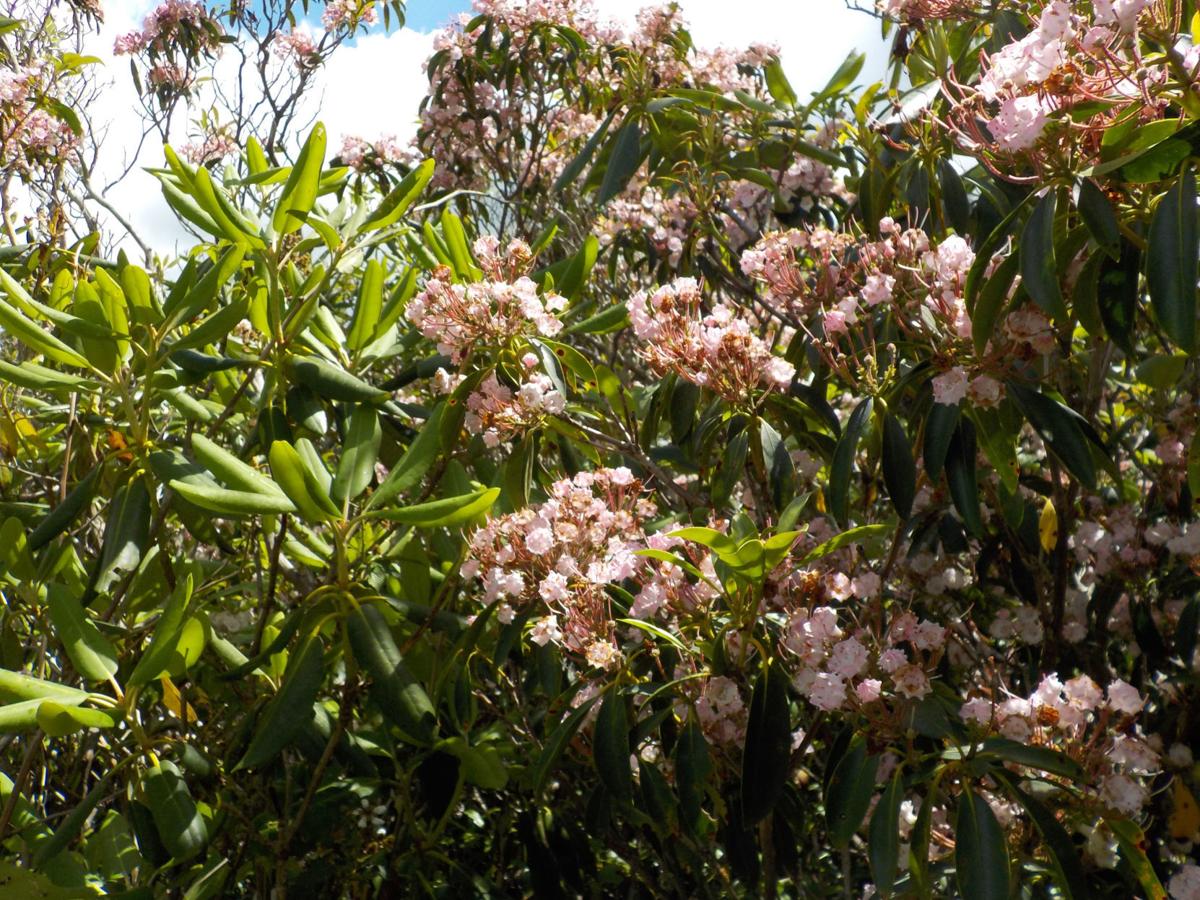 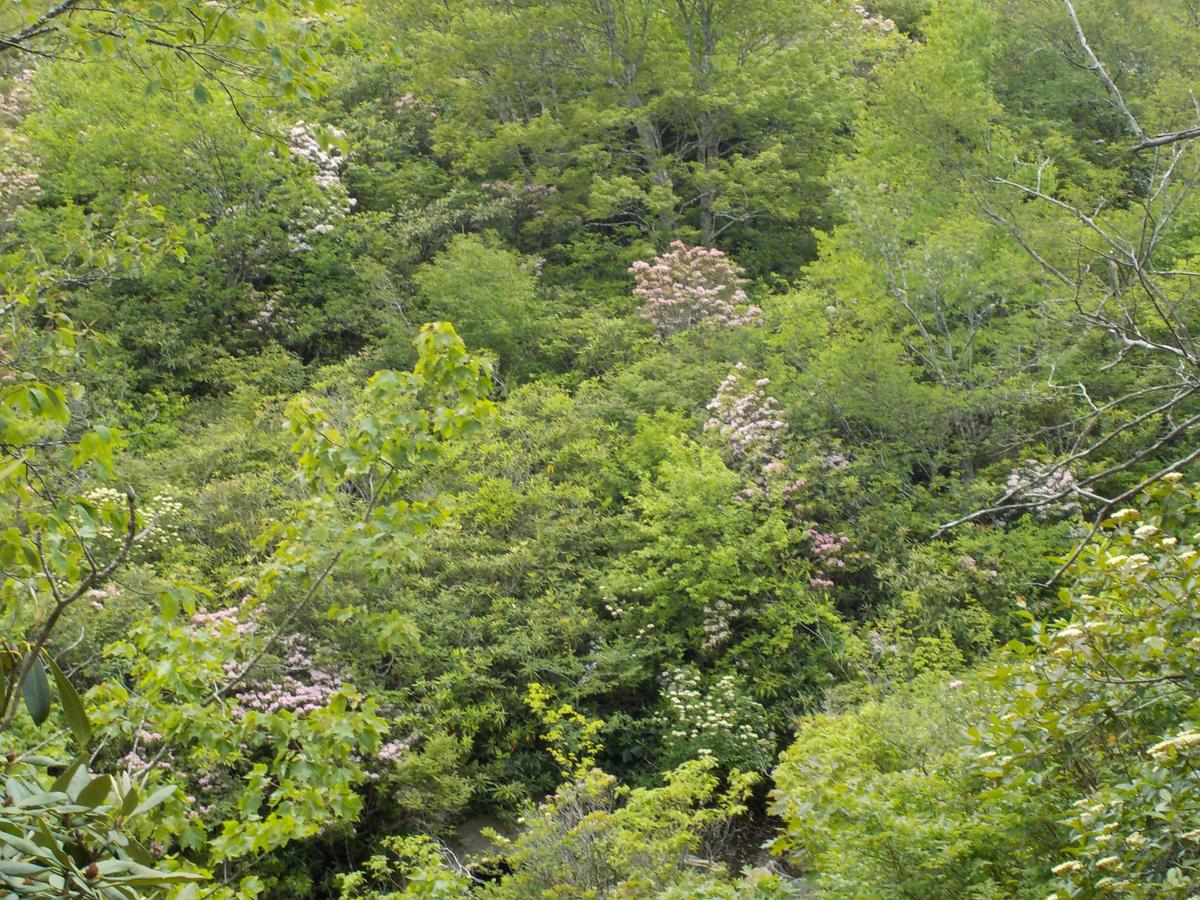 On some trails, the mountain laurels are so tall it closes in overhead to make a green tunnel lined with white and pink flowers. 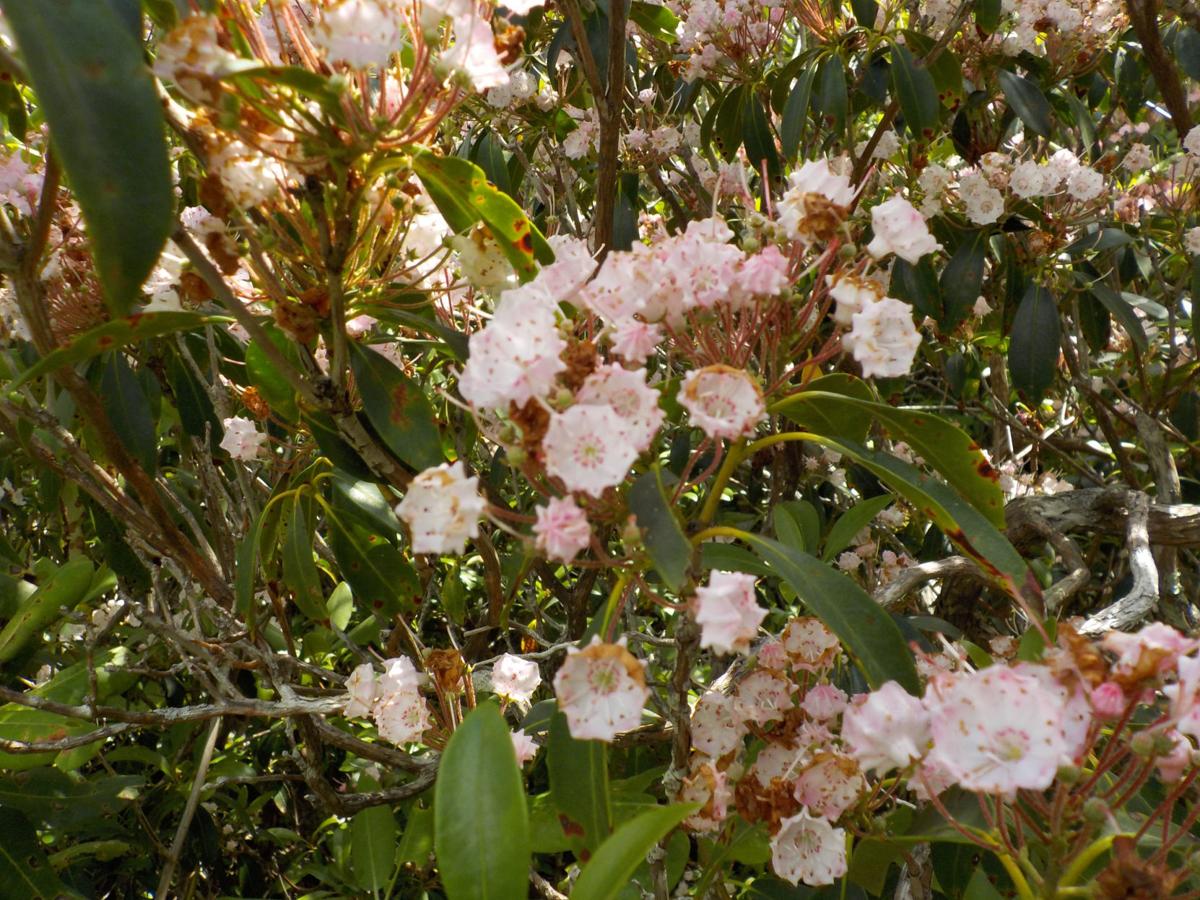 The mountain laurel will grow to a height or 6 to 10 feet and spread out about 3 feet with a gnarled appearance to the multiple trunks so plant them at least 4 feet apart.

I just returned from a week in the Mounts Pisgah area in western North Carolina, just south of Asheville.

We stayed in a cabin and mostly hiked trails outdoors to avoid close contact with other people and reduce chances for exposure to COVID-19. I think everyone will be glad when all this is over.

We spent most of our time outdoors between 4,500 and 7,000 feet above sea level, so the late spring wildflowers were still in bloom, and they were beautiful. We were too late to see the trillium, but did find some Jack-in-the-pulpit and many others. The orange azaleas, native to the area, were putting on a good show. At least two species of rhododendron were still blooming. But the real treat was the thousands of mountain laurel (Kalmia latifolia) plants blooming. They were gorgeous.

On a couple trails we walked, the laurels were so tall it closed in overhead to make a green tunnel lined with white and pink flowers. All over the mountain sides were thick growths of this large shrub growing under the bigger oaks, firs and other trees. This thick growth habit of mountain laurel — as well as rhododendron — justifies the name, laurel hells, many mountain people use for these thickets. Try to walk through one without a trail and you will see what I mean.

There may be a temptation to say that mountain laurel is just a smaller version of rhododendron. They have similar leaves, but the laurel leaves are only half as big. They are both members of the heath or heather family (Ericaceae), but that is the only similarity these two plants share. Mountain laurel can grow on some pretty poor sites with thin rocky soil while rhododendron prefers sites with better soils. You will often find these two plants growing near to each other in the mountains, but if you really look at their locations you can notice some small differences in how their growth requirements are met.

Mountain laurel was first described in the middle 1600s by a Finnish botanist who sent his information to Karl Linnaeus for his work in classifying plants by botanical order. It has been used as an exotic ornamental in Europe for a few hundred years. But the native range for this plant is the forests of eastern North America. It will grow in the Piedmont areas if the soil has less clay. It will not grow very well in most coastal plain areas, and it just loves the mountains.

Over the past couple centuries, horticulturists have developed varieties that will grow well in our landscapes. We don’t see this too often, especially in the Danville area. There should be more.

It needs an acid soil, pH between 4.5 and 5.5. This laurel will grow in partial shade to full sun but the leaves may yellow in full afternoon sun. If you have an area of trees — especially oaks and maples — this would be a good plant to use in the understory or along a shaded edge. A moist, well-drained soil low in clay content will give the best results. Too much clay will lead to root rot and a dead shrub.

The mountain laurel will grow to a height of 6 to 10 feet and spread out about 3 feet with a gnarled appearance to the multiple trunks so plant them at least 4 feet apart. It is important to plant shallow. The point where the trunks meet the roots, called the crown, must be at or just above the soil.

Cover the soil with about 2 or 3 inches of mulch and water often for the first couple years. To keep the appearance neat and full, remove spent flowers ever spring. Light pruning can be done after the flowers have faded. If heavy pruning is needed, simply cut it back to the crown and let it re-grow from there. Fertilize just before growth begins in the spring with an acidic fertilizer — the same used for azaleas and rhododendrons.

Mountain laurels are tough little plants that can take what Mother Nature can throw at them. They will just need a little help from the home gardener to get their roots established. After that, just enjoy watching them grow. They do not really need to be pruned or anything depending on how wild or natural you want them to look.

A plea to all the people who don’t wear masks

I’m not sure why most of the people in a home improvement store early this morning didn’t have on a mask. I walked into a convenience store to…

Got these brands in your closet? You've hit a resale goldmine

If you're looking to make some cash on clothing resale platforms, check your closet for brands that have the best resale value.

I confess; I am a toilet paper hoarder

This might be the scariest column I have ever written. The very publication of it might offend the social media judges who spit upon the very …

Buying Guide: Now there is a family-friendly version of Cards Against Humanity

Age-appropriate toilet humor and innuendos that adults and kids will love.

Should you take a dietary supplement to prevent disease?

Are you wasting your money on vitamins and minerals you don't need or possibly harming yourself by taking high doses? Here's the lowdown.

Ergonomics for the home office: Avoid injury with these upgrades

You should take a look at your home office space for signs of future and painful injuries. Here are ideas to help reduce the possibility of strain and undue fatigue.

A Wild West town is up for sale for $7.5 million — in New Zealand

A replica Wild West town deep in rural New Zealand has been put on the market — and if you have $7.5 million to spare, it's yours.

Doctor: The patients are getting younger and are more sick

Ursula Burns to Corporate America: You can undo the system

Ursula Burns to Corporate America: You can undo the system

Tips to stay safe this 4th of July

Tips to stay safe this 4th of July

Man's warning after he contracted coronavirus at bar

Man's warning after he contracted coronavirus at bar

On some trails, the mountain laurels are so tall it closes in overhead to make a green tunnel lined with white and pink flowers.

The mountain laurel will grow to a height or 6 to 10 feet and spread out about 3 feet with a gnarled appearance to the multiple trunks so plant them at least 4 feet apart.