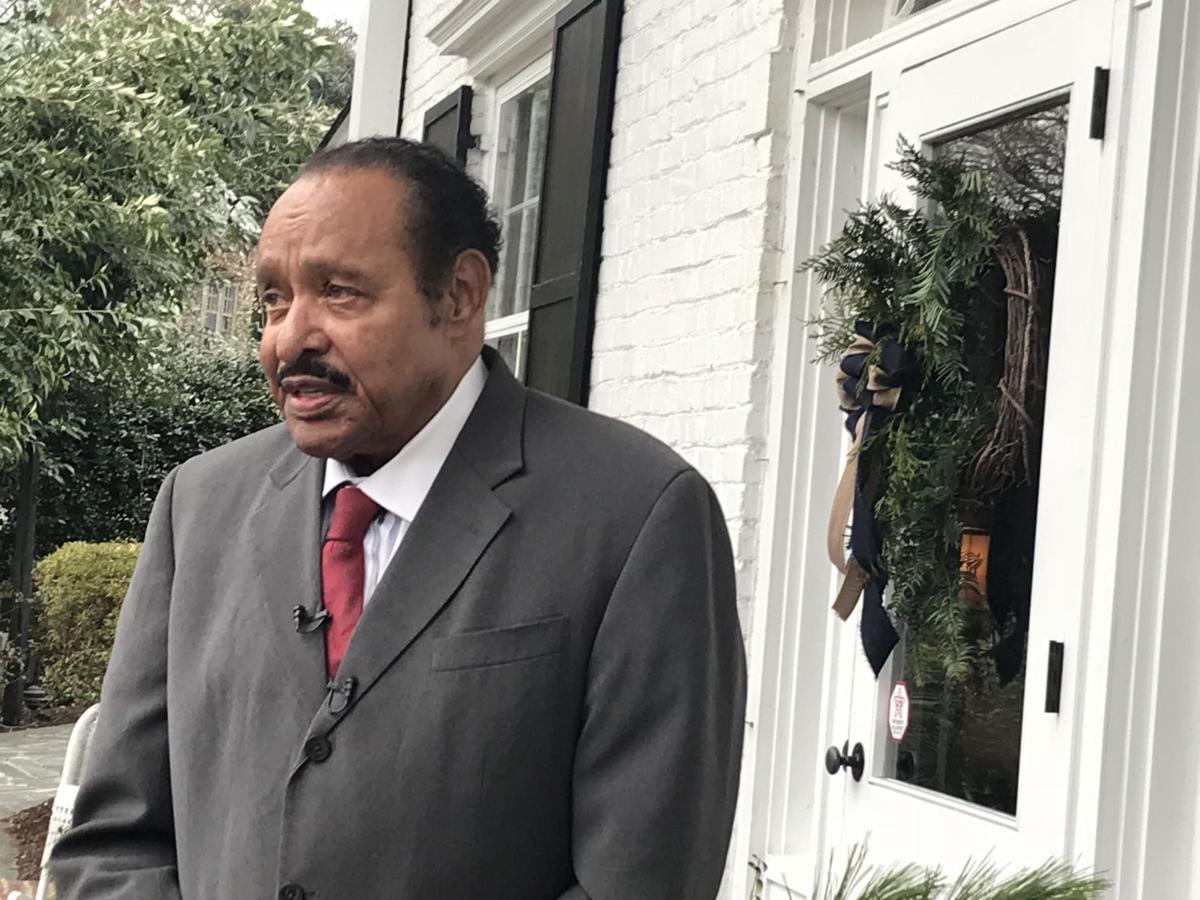 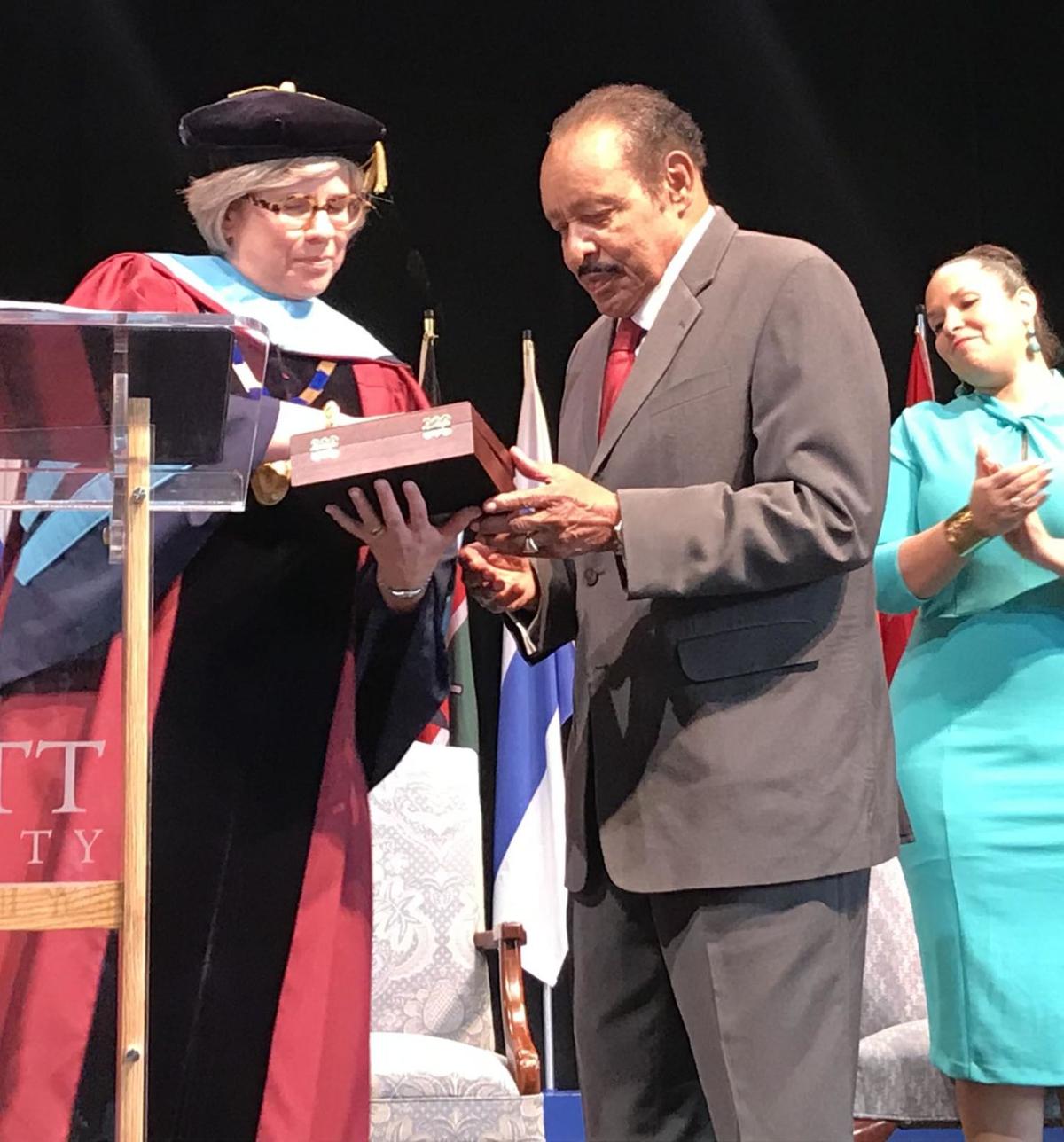 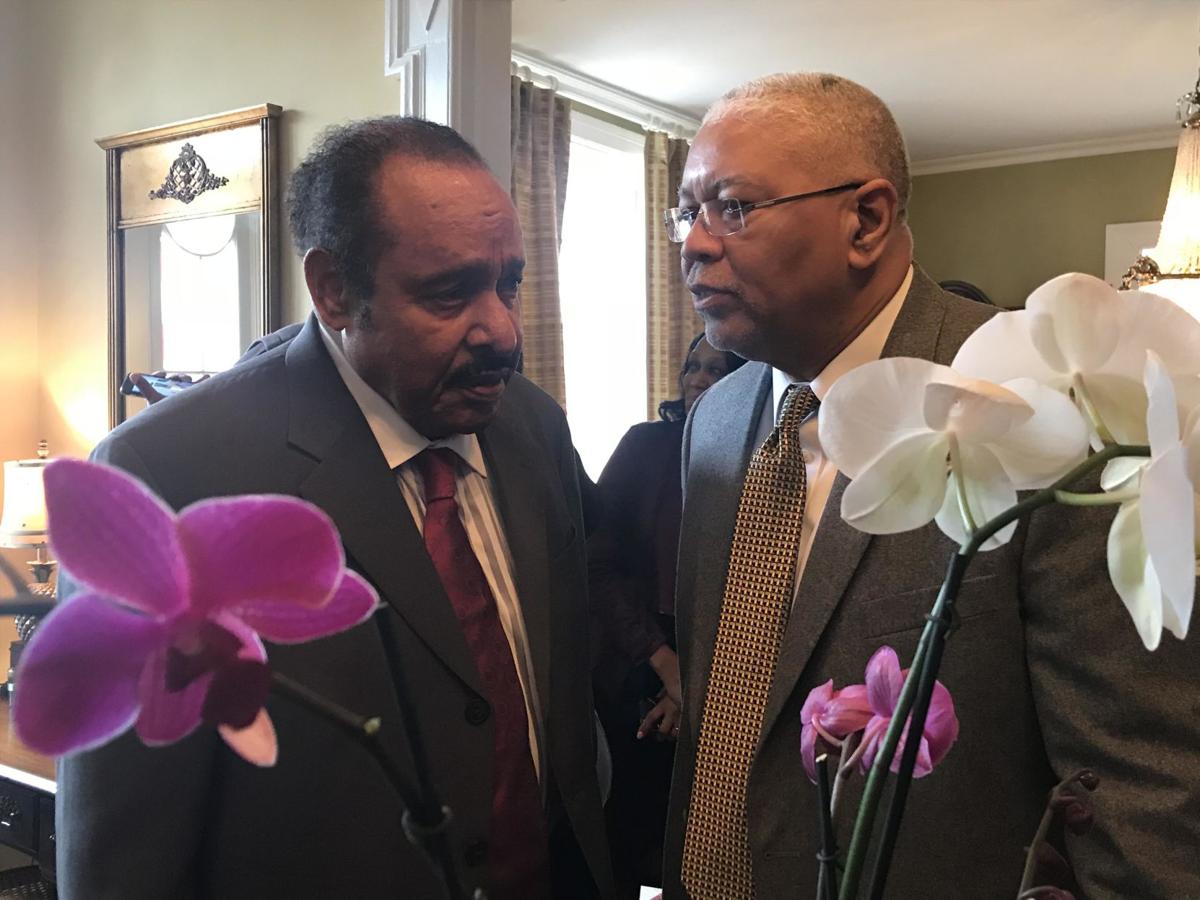 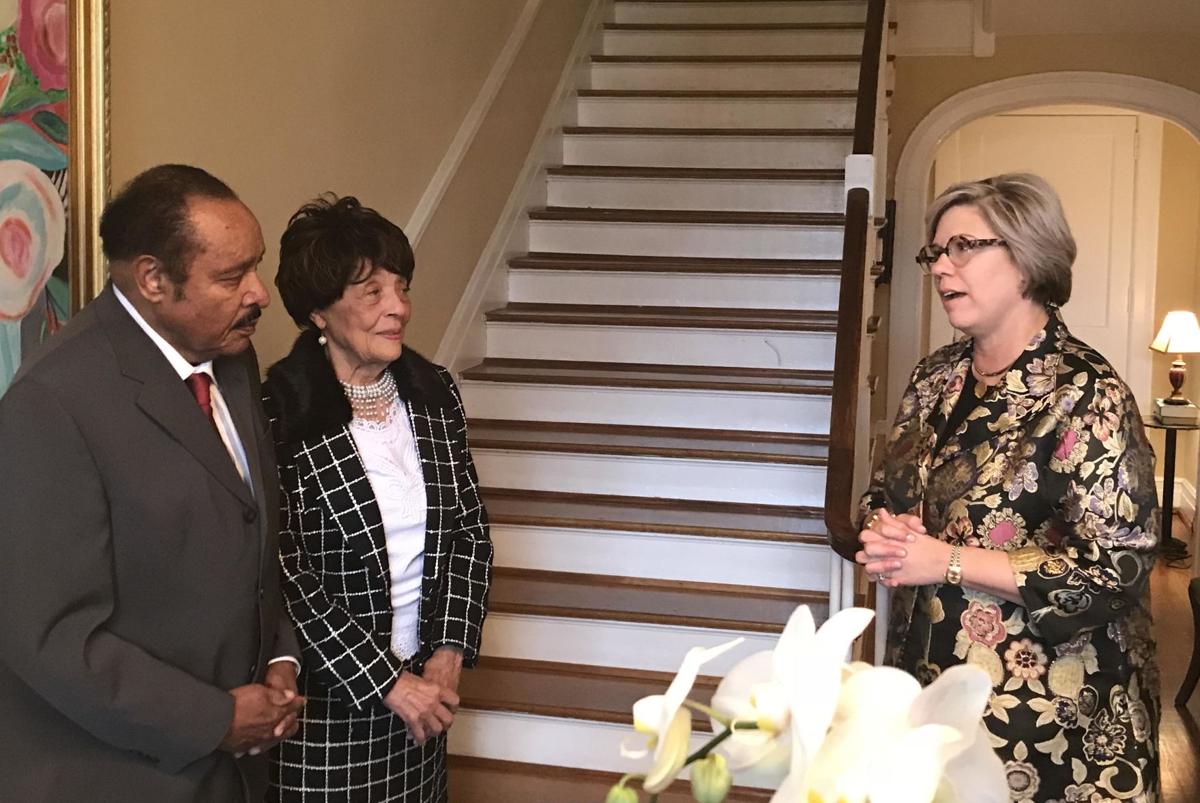 Bishop Lawrence Campbell and his wife, Gloria, who both founded Bibleway Cathedral, listen as Averett University President Tiffany Franks speaks of his inspiration to the community and the school. Franks presented Bishop Campbell with Averett’s first ever President’s Service Award on Thursday morning.

The school bestowed its inaugural President’s Service Award to Campbell, an Averett alumnus who graduated from the school in 1973 with a degree in psychology.

During an interview with local media Thursday morning, Campbell said he hoped the award can send a positive message to the Danville area.

“I hope we can bring about unity and togetherness,” he said on the front porch of the home of Averett President Tiffany Franks on the cold morning. “I’m so proud to be chosen as the first one.”

Whereas racism was blatant and overt in the 1960s, it is now more subtle and covert, he said.

The President’s Service Award is a new recognition for those who have shown exemplary service to Averett University or the surrounding region. Recipients of the award are chosen at the discretion of the president.

“You’re truly an inspiration to me and an inspiration to your alma mater,” Franks told Campbell during a gathering at her home just before the school’s Founder’s Day ceremony held in Averett’s Pritchett Auditorium. Campbell was recognized during the event.

Founders' Day is a tradition at Averett — dating back to the university's creation in 1859 — recognizing the significance of the founding contributors of the university.

Campbell has served as the pastor of Bibleway Cathedral in Danville since he and his wife, Gloria, founded the church in 1953.

He also served as the chief apostle and presiding bishop of the Bibleway Church of Our Lord Jesus Christ, leading over 300 churches in the United States, England, Africa and the Caribbean from 1998-2006.

Campbell, a U.S. Navy veteran, was a civil rights organizer and leader in Danville during the 60s, and has been a local voice and civil rights champion ever since, Franks pointed out.

Bibleway members told the Register & Bee of the role Campbell and his church have played in their lives.

Danville Dentist Dr. Zachary Hairston, 66, said he grew up “in the projects” just above Bibleway, which is located on Grant Street off Industrial Avenue in south Danville.

“We could walk right down the street to the church,” Hairston recalled, adding that he has attended Bibleway for more than 60 years

Preston Willard, 58, has been a member of the church all his life and has learned valuable life lessons from Campbell at Bibleway.

“It teaches you how to survive not only in the church, but outside in the real world,” Willard said.

Hundreds of students, faculty and staff gathered in Pritchett Auditorium in the Violet T. Frith Fine Arts Center to hear from alumni speakers for the Founders’ Day event.

Franks told those in attendance of the growth Averett has undergone in its 160 years. To provide perspective, she asked alumni and students to think how much they have changed since first stepping foot on campus, and about how much Averett has changed since 1859.

It was a growth mindset that carried Averett through the Civil War, World War I and World War II, and advancements in technology, Franks said.

Averett alumni Afira Arrastia-DeVries and Torrey Dixon spoke of the personal growth they experienced during their times at Averett.

Arrastia-DeVries, a 1998 Averett graduate who grew up in Worcester, Massachusetts, said the school’s professors and students from different backgrounds enabled her to see beyond the limitations imposed by her upbringing.

“They shaped my path and helped me to believe in myself,” she said.

DeVries is president and CEO of the United Way of Roanoke Valley.

Dixon, a Danville native who graduated in 2000, said he was able to enjoy Averett’s small and diverse community — interacting with fellow students from other places including the Bahamas, Kenya and Nepal — and then return home to a home-cooked meal.

Currently North Carolina’s assistant attorney general, Dixon said Averett taught him he could make a difference in the world.

“Averett not only bettered me, but it convinced me I could change the world for the better,” he said.

Senior aviation student Tyler Henley, in his charge to students, humorously told of his nervousness when he was picked — accompanied by a flight instructor — to fly Franks to events in Richmond and Greensboro, North Carolina, on the same day in June 2018.

The assignment was an example of the confidence Averett had in him, Henley said.

“Averett believes in its students,” he said.

Near the end of the event, Franks presented Campbell with a decorative box with a plaque inside.

The Pittsylvania-Danville Health District set another record for the most reported COVID-19 cases in a single day.

Not many Danville residents have taken advantage of more than $500,000 in mortgage and rental assistance available for those affected financia…

After three straight weeks, the Pittsylvania-Danville Health District is no longer listed as a surge area by the Virginia Department of Health…

The Danville School Board on Thursday unanimously approved a reopening plan for the 2020-21 academic year.

Between Pittsylvania County and Danville, 50 new cases of COVID-19 were reported on Friday a morning, a single-day high. However, the Virginia…

A 5.1-magnitude earthquake hit Sparta, North Carolina, at 8:07 a.m. Sunday, according to the United States Geological Survey. It followed a much smaller 2.6-magnitude quake that happened at around 2 a.m. Sunday.

Bishop Lawrence Campbell and his wife, Gloria, who both founded Bibleway Cathedral, listen as Averett University President Tiffany Franks speaks of his inspiration to the community and the school. Franks presented Bishop Campbell with Averett’s first ever President’s Service Award on Thursday morning.