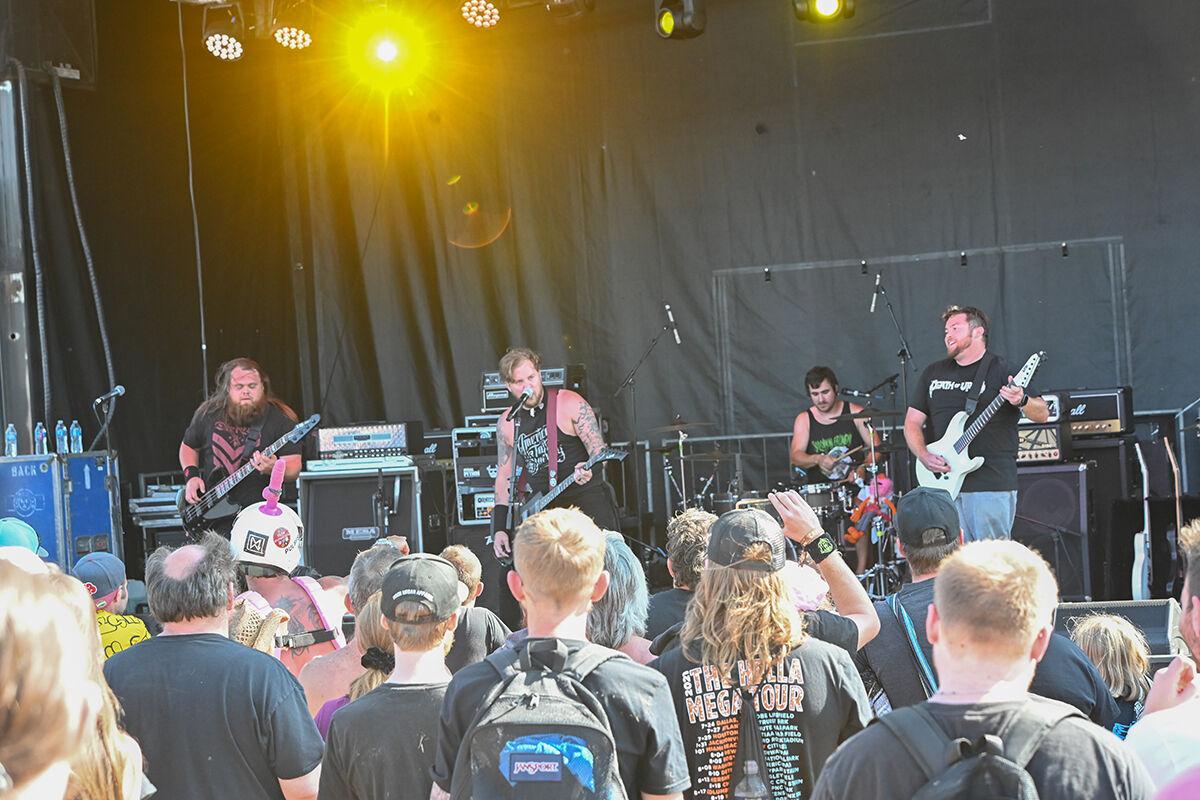 A band performs for the crowd Sept. 10 at the Blue Ridge Rock Festival. 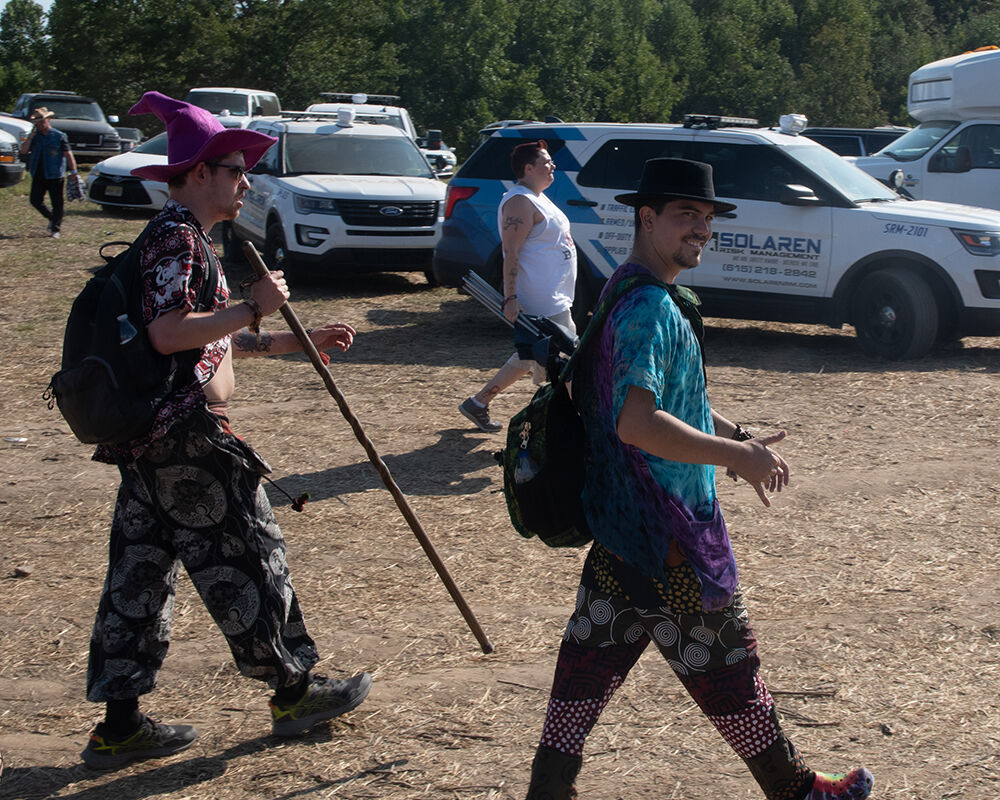 Colorful attire adds to the atmosphere at the Blue Ridge Rock Festival on Sept. 10. 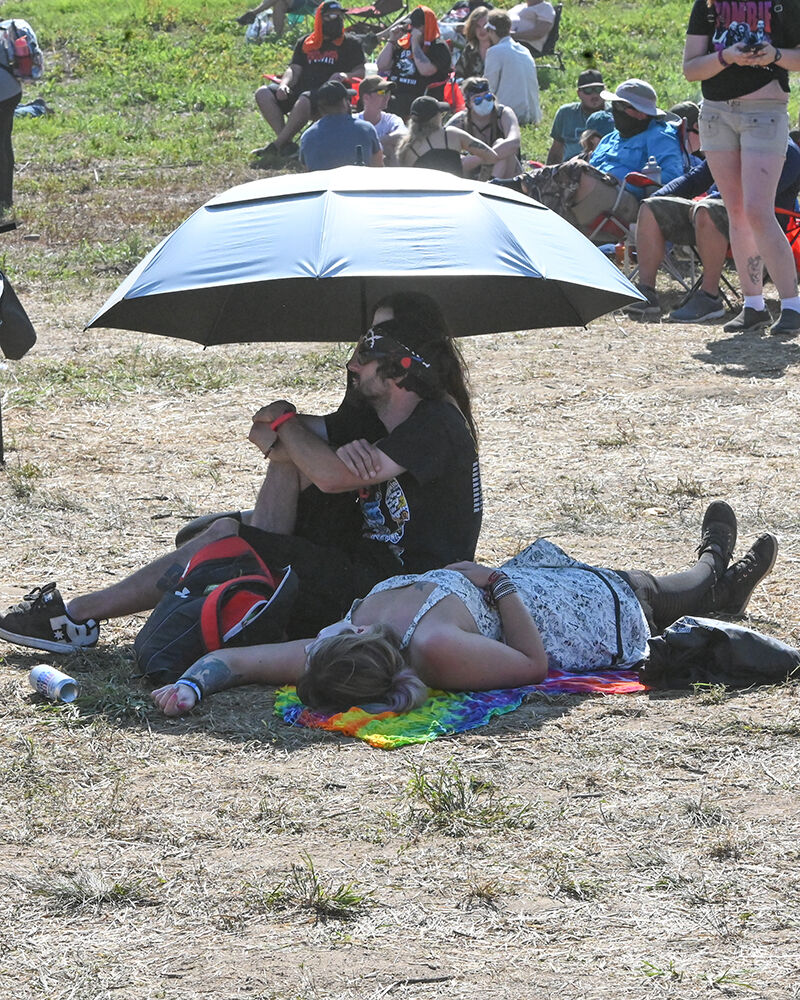 A large umbrella shades this couple Sept. 10 at the Blue Ridge Rock Festival in Blairs.

After being overwhelmed by the thousands of fans arriving for last week’s Blue Ridge Rock Festival, the promoter pivoted and turned all operations outside of the event gates over to Pittsylvania County, ultimately leading to what officials termed as a “flawless” affair.

The 4-day festivities kicked off Thursday, backing up traffic along U.S. 29 in Blairs. On the first day of the event, it took about 20 to 30 minutes for a Register & Bee reporter to get from the exit onto northbound U.S. 29 to R & L Smith Road, which leads to Carson Lester Lane and the Blue Ridge Amphitheater.

“Events of this scale are going to cause some congestion and difficulty in an area like ours,” Pittsylvania County spokesperson Caleb Ayers told the Register & Bee. “We are confident that moving forward those negative impacts can and will be mitigated.”

Ayers acknowledged delays and traffic woes through the entire 4-day run but said it improved after the county took over outside operations. Those efforts involved hundreds from the Pittsylvania County Sheriff’s Office, Virginia State Police, Pittsylvania County Public Safety, Virginia Department of Transportation, and members of the county’s volunteer fire and rescue agencies.

About five officers from the Danville Police Department also helped at the festival, according to Maj. Tim Jones. They volunteered after the county “issued a mutual aid call to local jurisdictions” before the event, city spokesperson Arnold Hendrix said.

The costs associated with those government agencies stepping in to help will be paid for by Purpose Driven Events.

Pittsylvania County estimates about 33,000 people attended the rock festival each day, with about 20,000 campers on the site, making it the largest event in the region’s history. Representatives with Purpose Driven Events, the promoter of the festival at the amphitheater, did not answer questions from the Register & Bee by time for publication, including a request for a final fan count.

However, the Blue Ridge Rock Festival admitted to some early on hiccups.

“We have heard you and understand that getting to the festival grounds has been confusing,” officials wrote on the Facebook page Thursday before explaining shuttle services and displaying maps of the area. “We apologize that this has been so confusing the past couple days, we hear you and are working to make your Fan Driven experience the best it could be.”

There were no “major incidents” at the event reported by the county. Jones also said there were no festival-related calls that spilled over into the city limits.

“There were minimal law enforcement incidents outside of and inside the event grounds, which is a testament to the careful planning and excellent execution from the many regulating agencies that were involved and a testament to the fans, who were courteous, helpful and largely positive about the way the event improved each day,” a statement from the county read.

With Danville hotel rooms booked solid last week, city finance director Michael Adkins said he expects increased revenue from the transient lodging tax. However, it will be October before those payments are collected to know the full financial impact.

“People stayed at our campgrounds and Airbnb hotels, stopped at our gas stations, ate at our restaurants, and we have heard many firsthand accounts of people taking the time to enjoy the amenities our local community has to offer,” Ayers told the Register & Bee, who said the revenue windfall extends beyond the borders of Pittsylvania County.

Danville City Council member Lee Vogler was one of the local fans who ventured to the amphitheater.

“To all those who visited the #DanvilleVA region for the Blue Ridge Rock Festival this week, I hope you enjoyed our area,” Vogler said on his councilman’s Facebook page. “I had an awesome time rocking out with you guys. Hope to see ya next year!”

A Blairs home was destroyed in a Monday morning fire.

A band performs for the crowd Sept. 10 at the Blue Ridge Rock Festival. 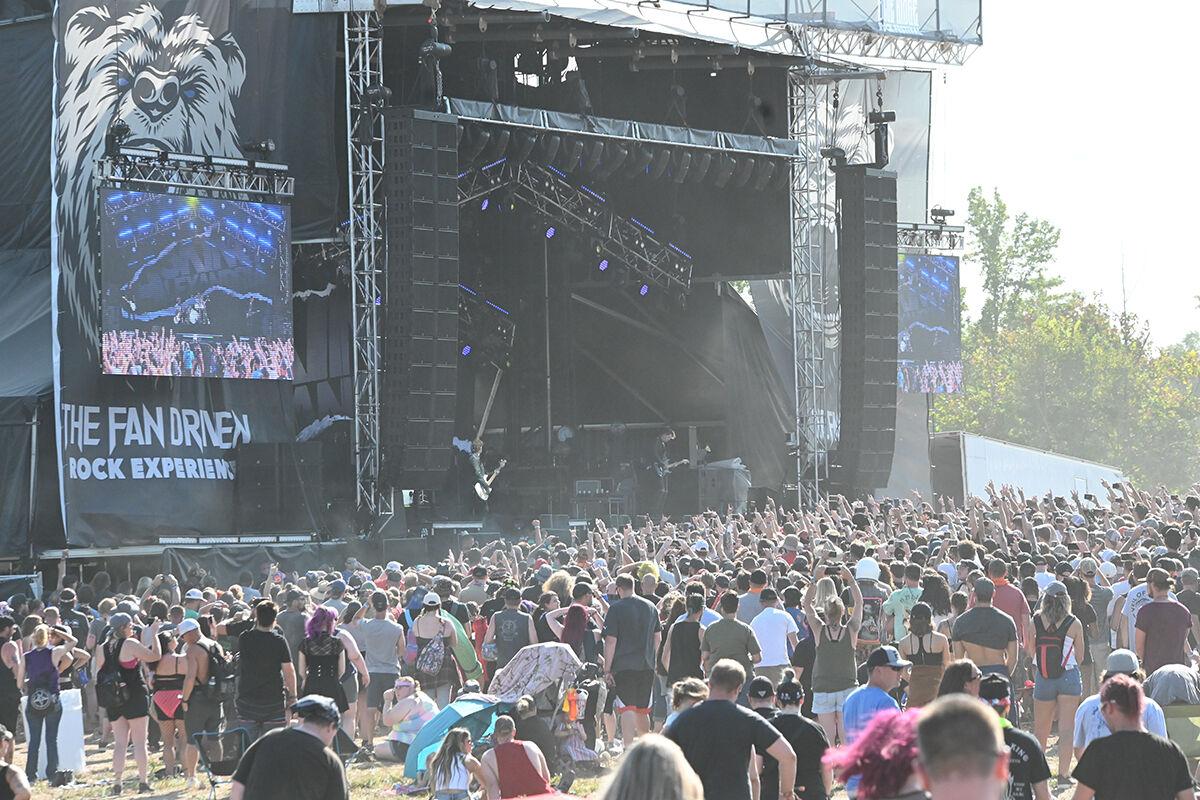 As a band plays Sept. 10 at the Blue Ridge Rock Festival, dust starts to fill the area around the stage.

Colorful attire adds to the atmosphere at the Blue Ridge Rock Festival on Sept. 10. 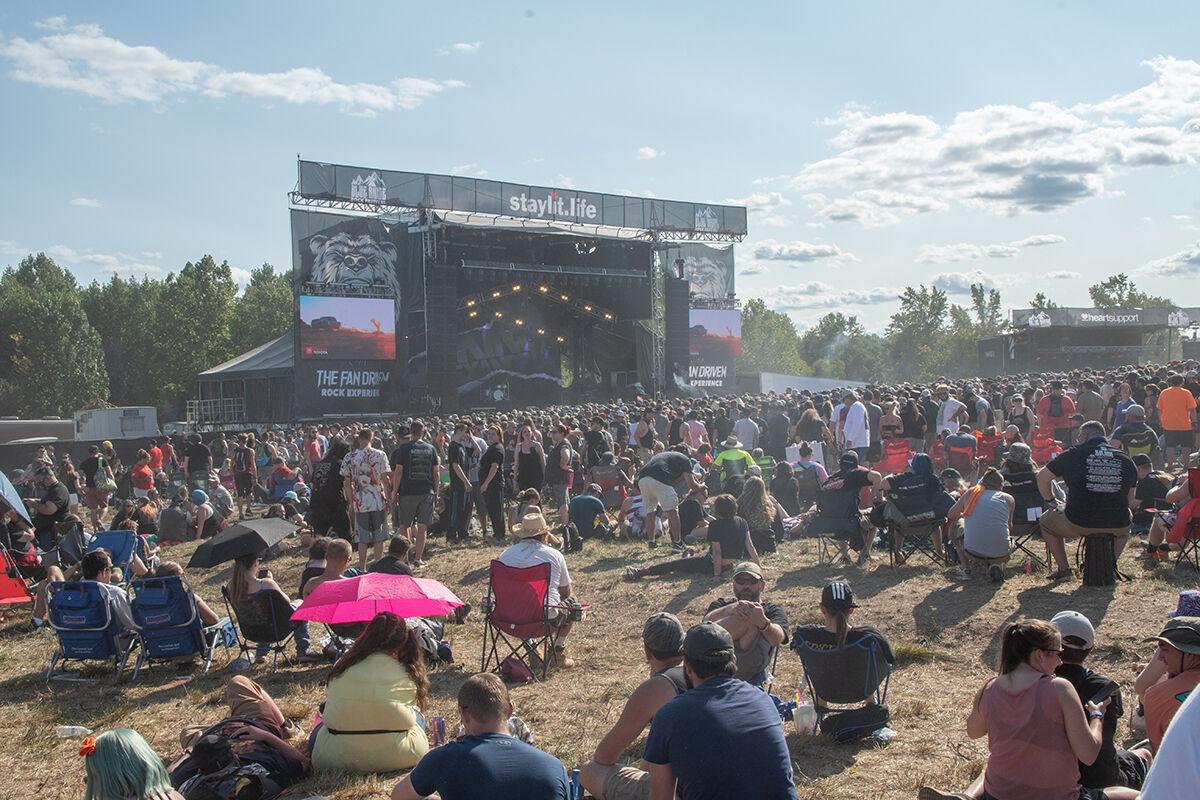 Some people use umbrellas to keep out the sun Sept. 10 at the Blue Ridge Rock Festival in Blairs. 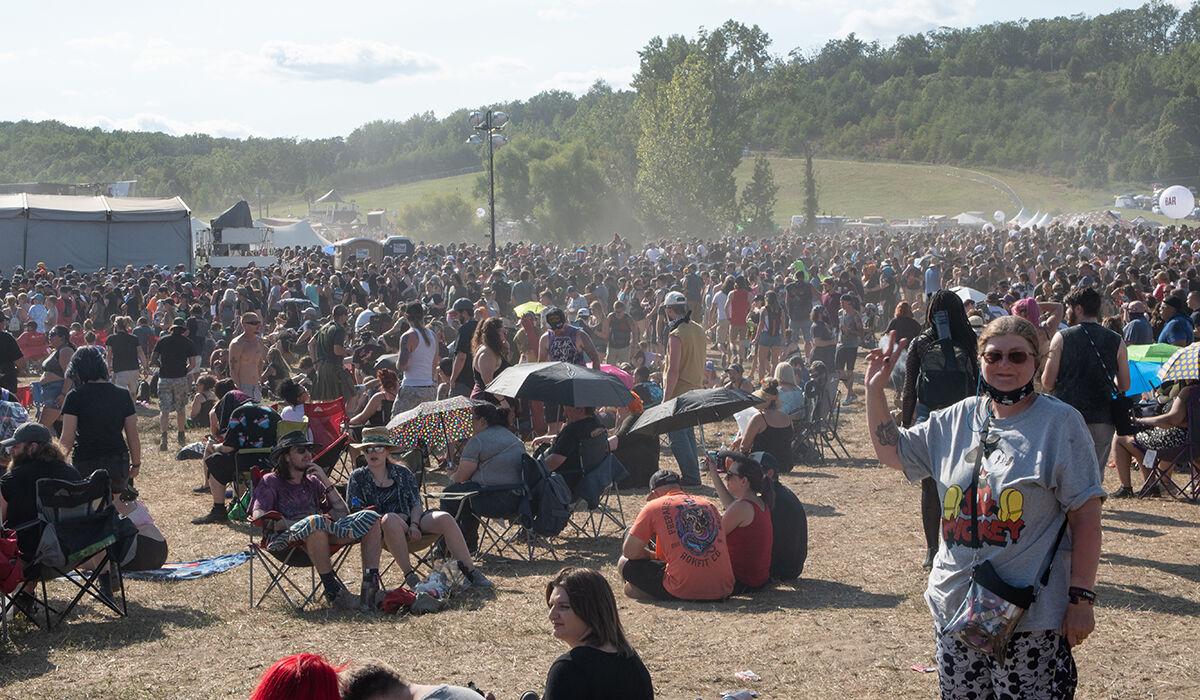 Dust gathers above a crowd as people walk from one stage to another Sept. 10 at the Blue Ridge Rock Festival.

A large umbrella shades this couple Sept. 10 at the Blue Ridge Rock Festival in Blairs.