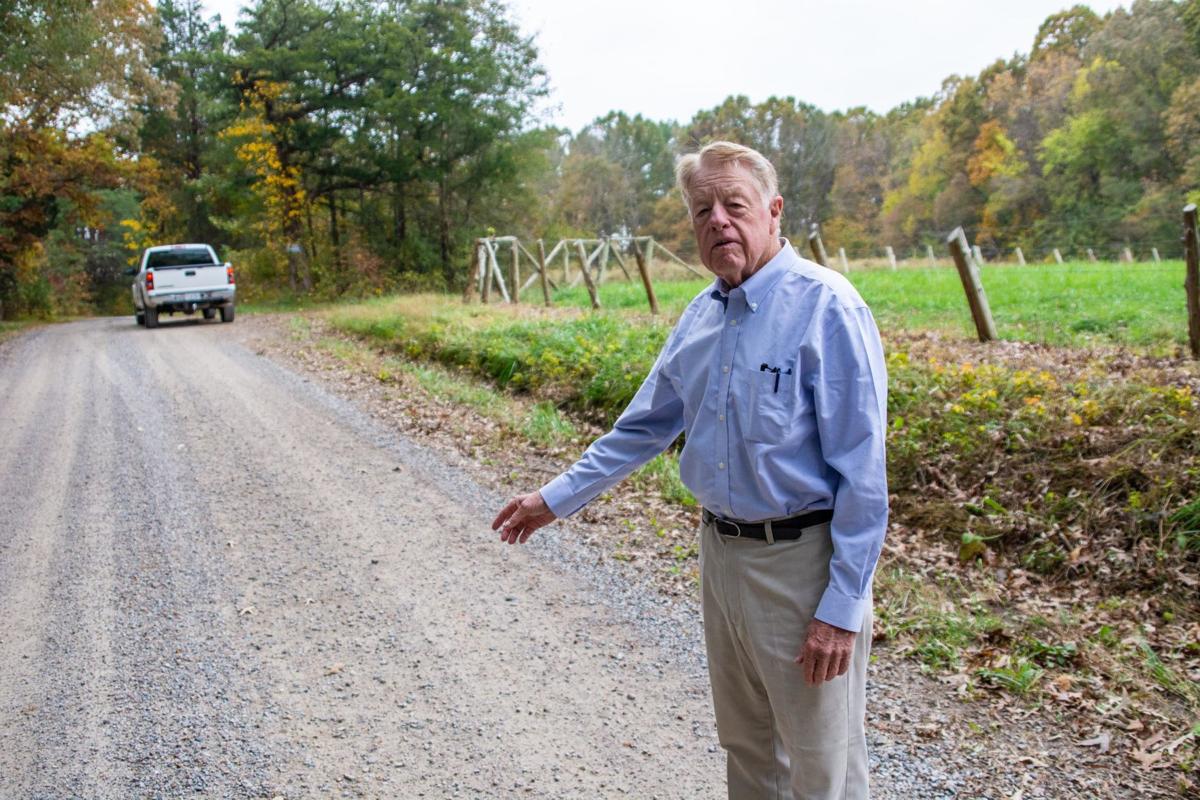 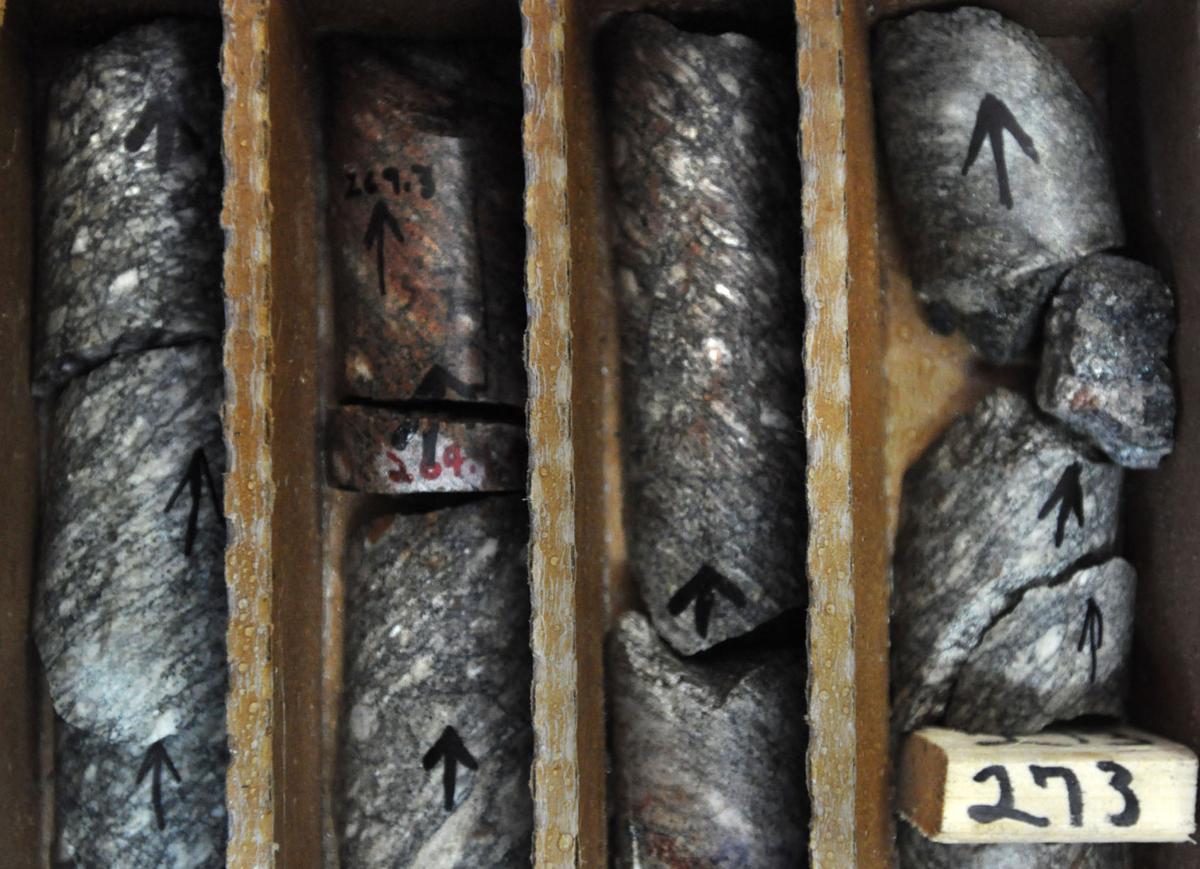 Pieces from a single rock core are organized by depth from which they were extracted inside a box on Walter Coles' property in 2009. (File photo) 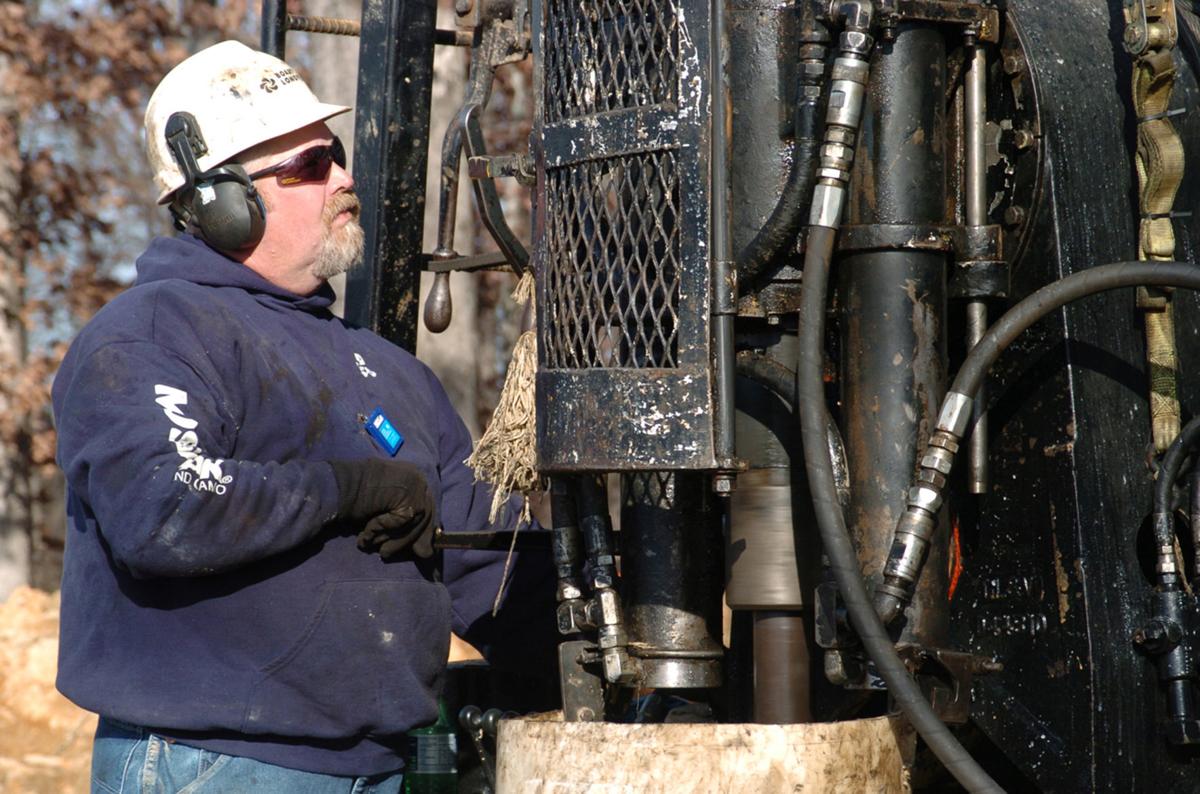 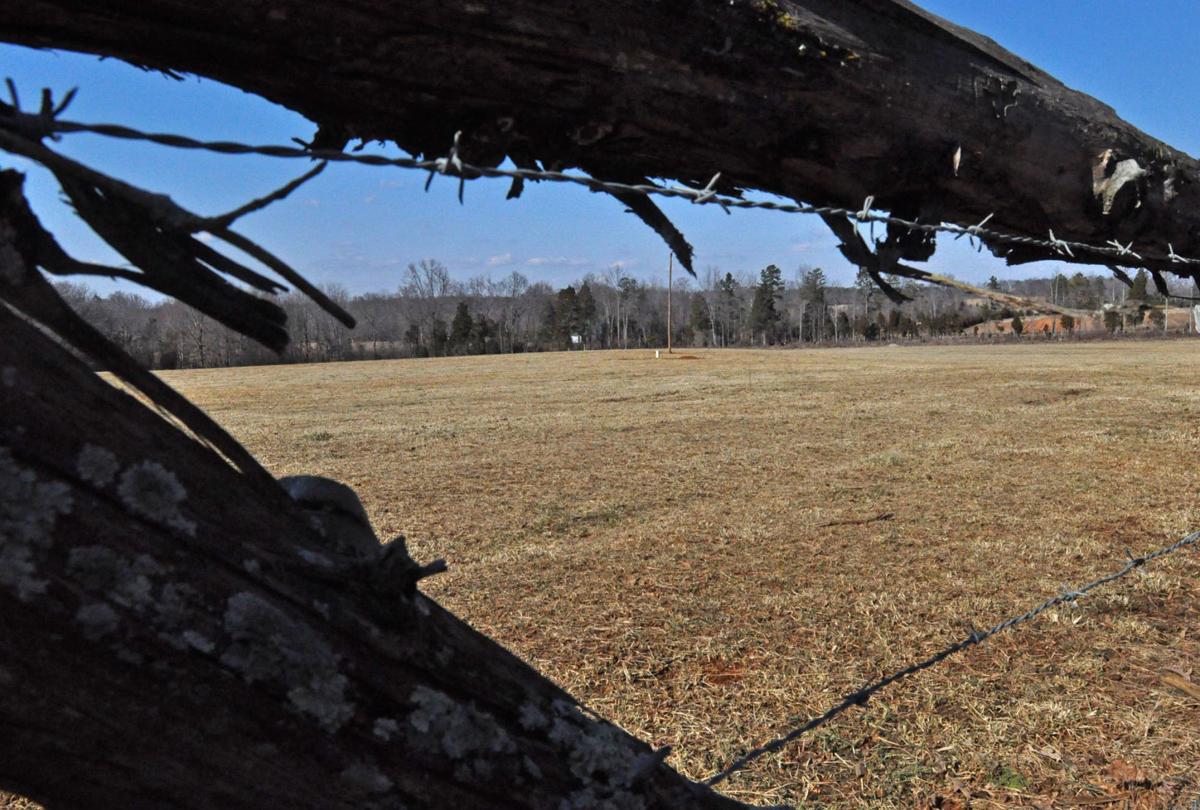 A field where cores have been withdrawn from the earth is seen on the property of Walter Coles in 2009. (File photo) 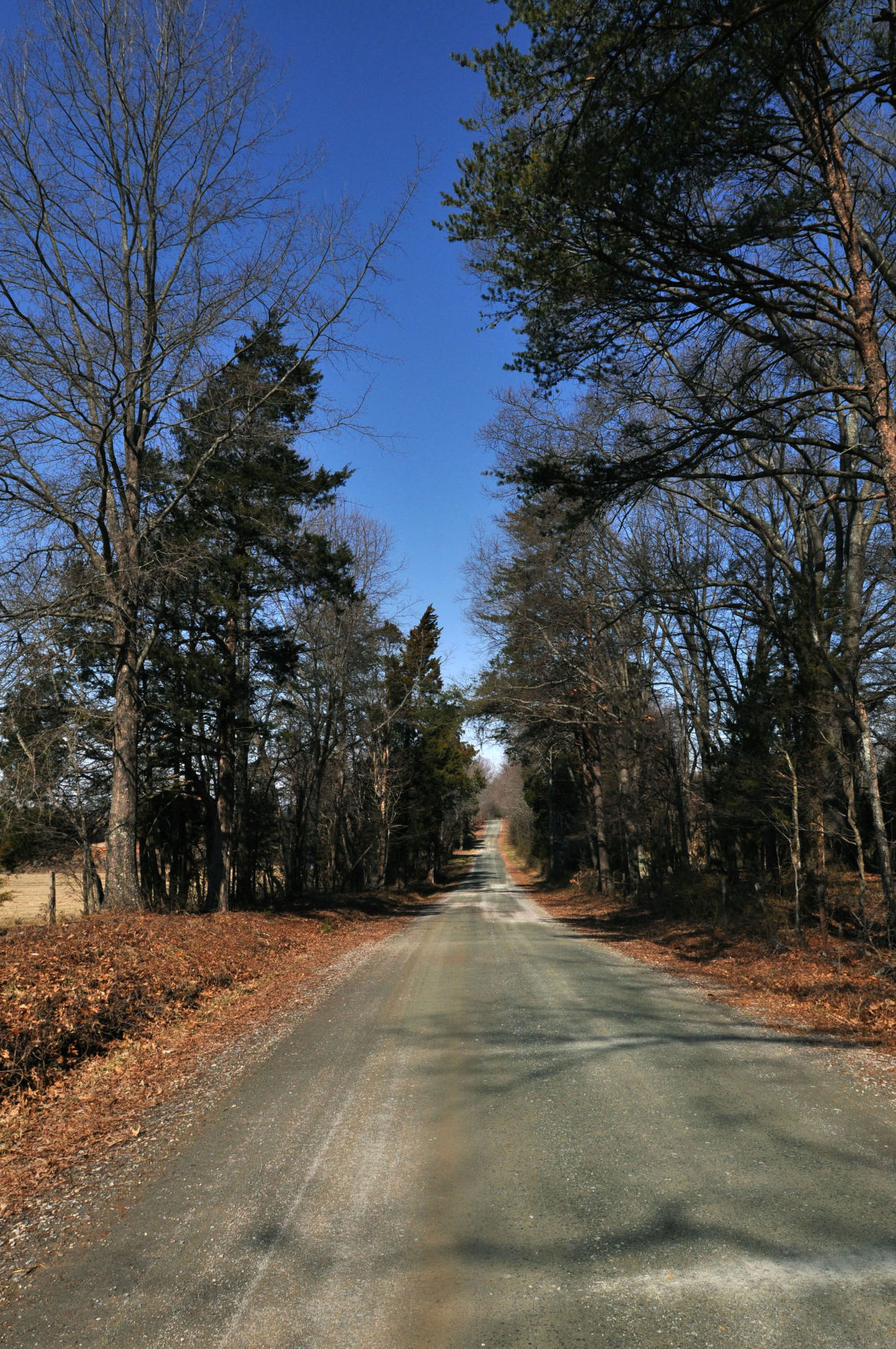 Coles Road, a state-maintained gravel road that runs through the property of Walter Coles seen in 2009, effectively demarcates the two types of rock on the property. The uranium deposits are on the left side of the road.

Walter Coles Sr. said, despite the U.S. Supreme Court’s unfavorable ruling, he is not giving up.

“We continue to think that Virginia’s uranium mining ban is both unlawful and unwise, and we are resolved to pursue other challenges to the Commonwealth’s confiscation of Virginia Uranium’s mineral estate,” the CEO and president of Virginia Uranium Inc. said in a prepared statement Monday.

Neither Coles nor a VUI attorney, John Ohlendorf, would elaborate for the Danville Register & Bee on how the company plans to challenge the ban.

The statement came shortly after the highest court in the land upheld Virginia’s ban on uranium mining in a decision released Monday morning.

By a 6-3 vote, the court ruled federal law does not preempt the state’s prohibition on uranium mining.

The central question of the case — Virginia Uranium Inc. v. Warren — was whether Virginia’s long-standing moratorium is preempted by the Atomic Energy Act, which is a federal law passed during the Cold War to control civilian and military use of nuclear material.

Virginia Uranium Inc. in Pittsylvania County sought to mine and mill a 119-million-pound ore deposit at Coles Hill, about 6 miles northeast of Chatham. It is the largest uranium deposit in the United States and its worth once valued at $10 billion, according to the Washington Post, which noted the price of uranium does fluctuate.

The Supreme Court case was the latest attempt by a group in a decades-long battle to apply for the right to mine the ore.

“Virginia Uranium insists that the federal Atomic Energy Act preempts a state law banning uranium mining, but we do not see it,” Justice Neil Gorsuch wrote in the court’s lead opinion, joined by Clarence Thomas and Brett Kavanaugh.

According to the three justices, the court’s ruling addressed the wrong question and defeated “an argument no one made, reaching a conclusion” no one disagrees with.

No one disputes the act does not preempt state regulation of uranium mining, Roberts wrote in the dissent. However, the question is whether a state can regulate an activity that is not preempted (uranium mining) as an indirect way to regulate others that are preempted by the act (uranium milling and tailings), Roberts pointed out.

“The [act] prohibits state laws that have the purpose and effect of regulating preempted fields,” Roberts wrote.

Uranium is processed by mining, milling and storing tailings. Mining involves extracting the uranium from the ground; milling converts it to usable form; and the tailings are the radioactive leftover waste that has to be safely stored.

While the Atomic Energy Act gives the Nuclear Regulatory Commission authority over milling, transfer, use and disposal of uranium — as well as the construction and operation of nuclear power plants — “Congress conspicuously chose to leave untouched the states’ historic authority over the regulation of mining activities on private lands within their borders,” Gorsuch wrote.

Enforcing Virginia’s law would not interfere with the purposes of the act, he added.

Coles was not happy with the court’s ruling.

“We are still studying the Supreme Court’s opinions, but we are obviously disappointed with the result,” he said in a prepared statement.

The court heard the case on Virginia’s power to ban uranium mining Nov. 5 in Washington, D.C.

Cale Jaffe, law professor and director of the Environmental and Regulatory Law Clinic at the University of Virginia, said the decision is significant because other states will have a role to play in setting major environmental policy, especially with the rollback of federal regulations under President Donald Trump.

“States will have a lot of leeway to chart their own course,” Jaffe said.

He also pointed out the “diverse ideological spectrum” of the justices who agreed to uphold the ban.

State officials were pleased with the court’s decision.

“This is a big win for the health and safety of Virginians and our environment,” Attorney General Mark Herring said in a prepared statement. “Our ban on uranium mining has protected our citizens, communities, local economies and waterways for more than 30 years.”

The ruling confirms Virginia has the right to decide “that a risky, potentially dangerous activity like uranium mining is not for us,” he added.

The court’s decision was the right one for two reasons — the region’s environmental quality and states’ rights, said Del. Danny Marshall, R-Danville.

“It’s certainly good for our area to keep that uranium in the ground where it belongs because the problem is the tailings ... could be radioactive for hundreds and hundreds of years,” Marshall said.

Also, the court didn’t want to overrule what the state legislature and governors have done in the past, he added.

“Uranium mining poses unacceptable threats to our natural resources — today’s Supreme Court decision is the right call for Virginia’s environment,” he said in a prepared statement.

Karen Maute, a member of Piedmont Residents in Defense of the Environment and a long-time uranium mining opponent, was overjoyed at the ruling.

“I’m ecstatic,” said Maute, who was not speaking on behalf of the group.” It’s definitely good news. We can only hope this issue is behind us for at least a while.”

A wide range of groups like the Southern Environmental Law Center, Roanoke River Basin Association and the Danville Pittsylvania County Chamber of Commerce most recently had cited their support for the moratorium in friend-of-the-court briefs submitted to the Supreme Court.

In its brief, Virginia stated Congress has the ability to take away the state’s ability to regulate conventional mining, but as the law stands that power remains with states. By default, the moratorium on mining is within the state’s right.

The commonwealth argued the petitioners were unable to prove that the radiological concerns cited during the enactment of the moratorium were “solely” directed toward tailing and not mining.

Though the language of the moratorium and Atomic Energy Act aren’t in conflict explicitly, the petitioners — Virginia Uranium, Inc.; Cole Hill, LLC; Bowen Minerals, LLC; and Virginia Energy Resources, Inc. — believed they could prove the legislators’ motive behind the state’s ban nullifies it.

It’s that moratorium VUI and its attorneys sought to overturn. Their argument, rejected at various levels of federal courts in the Richmond-based Fourth Circuit since the suit initially was filed in 2015, was the Virginia moratorium violates the federal Atomic Energy Act of 1954 (an amendment of the 1946 act) and the Supremacy Clause of the U.S. Constitution.

The basis of VUI’s lawsuit was a legal theory that “development, regulation and disposal of nuclear materials and facilities” includes mining, processing and enrichment of uranium deposits.

Other constitutional officers in city are running unopposed.

As dispensary zoning advances in Danville, a long list of regulations are already rooted.

WATCH NOW: After co-pastors of Danville church lose home to fire, an outpouring of love from community

They have been showered with food, clothes, money, cards and emotional support.

Pieces from a single rock core are organized by depth from which they were extracted inside a box on Walter Coles' property in 2009. (File photo)

A field where cores have been withdrawn from the earth is seen on the property of Walter Coles in 2009. (File photo)

Coles Road, a state-maintained gravel road that runs through the property of Walter Coles seen in 2009, effectively demarcates the two types of rock on the property. The uranium deposits are on the left side of the road.