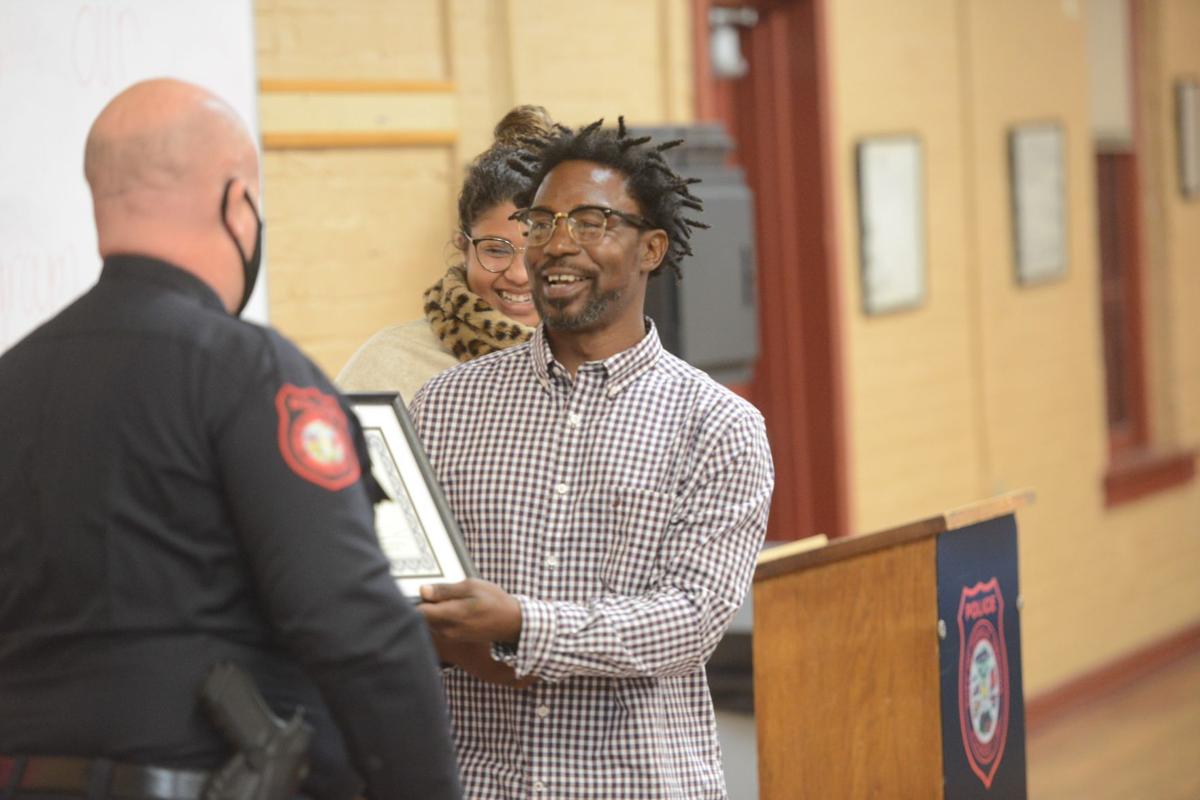 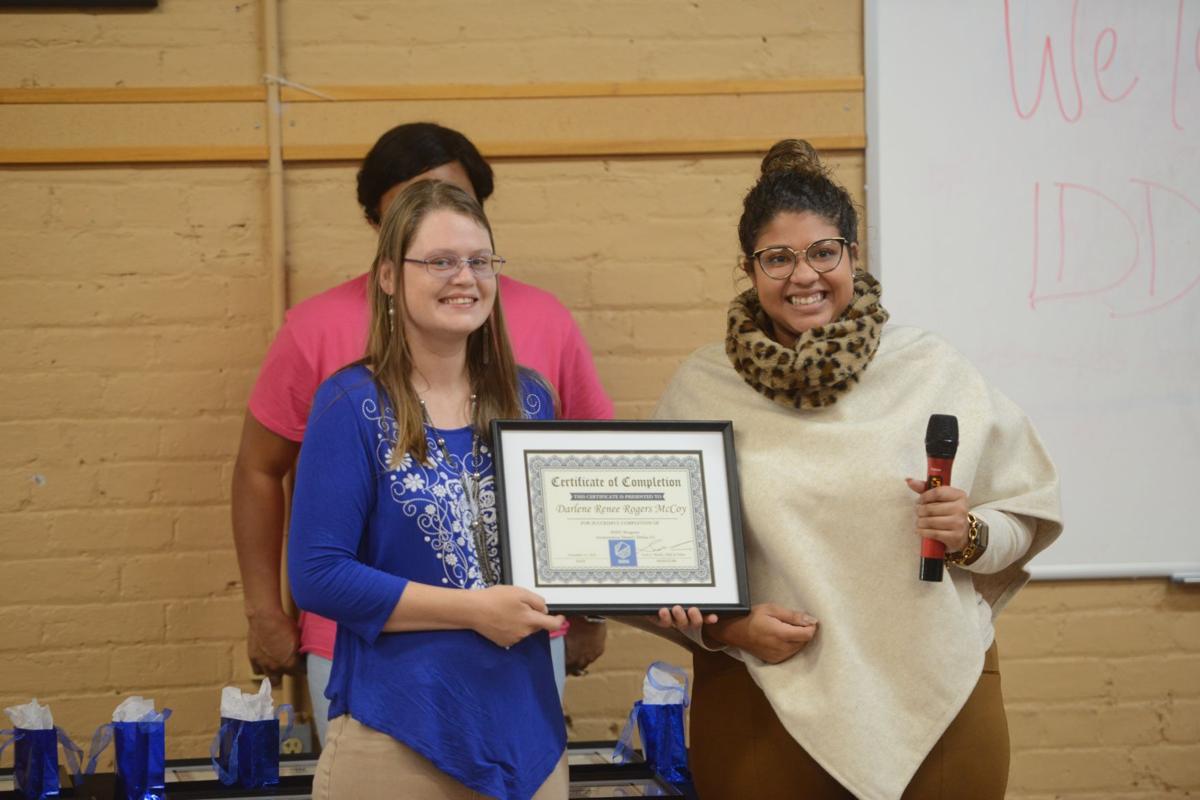 Darlene Rogers McCoy (left), a graduate of the Incarceration Doesn't Define Us program, poses for a photo with Ashtyn Foddrell, the community relations liaison for the Danville Police Department. 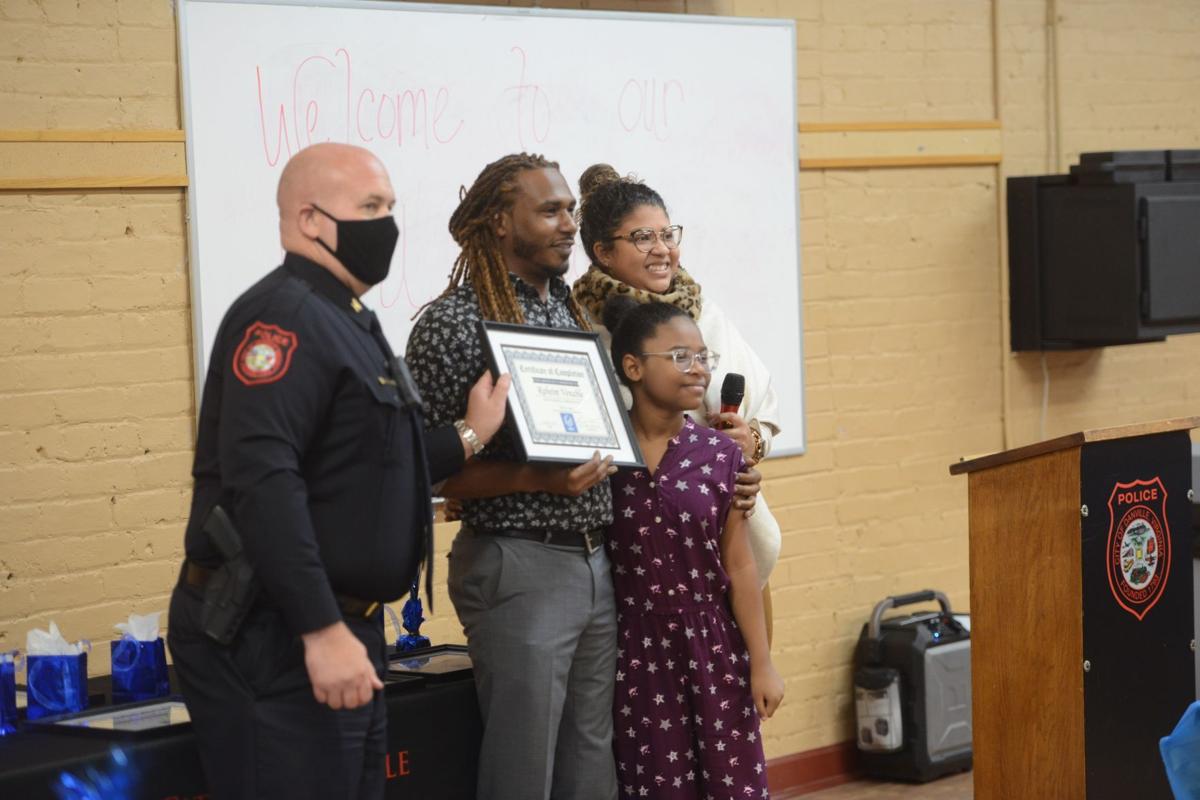 Rahiem Venable (center) and his 9-year-old daughter Brielle pose for a photo with Danville Chief of Police Scott Booth and Ashtyn Foddrell, the community relations liaison for the Danville Police Department. 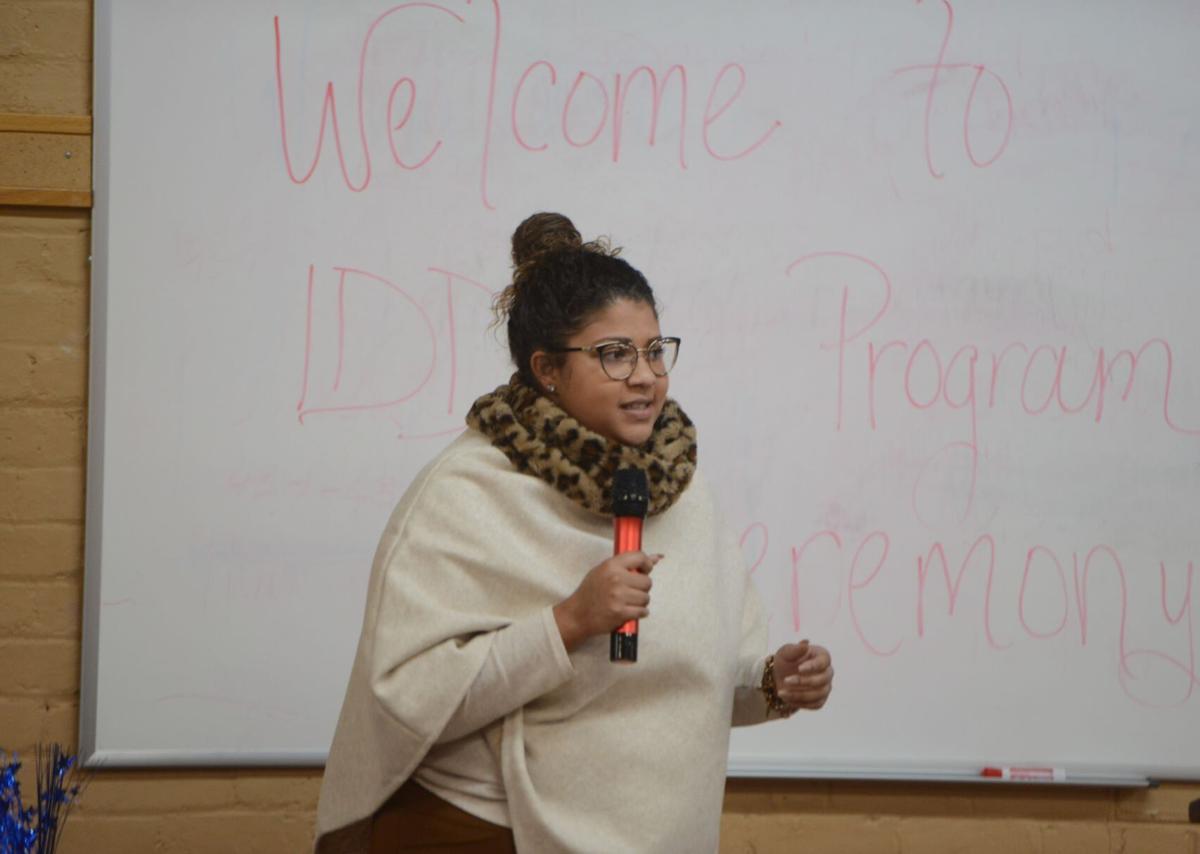 The first cohort of previously incarcerated individuals who participated in the Danville Police Department’s IDDU program graduated Thursday evening, wrapping up an 8-week stretch of classes and training meant to prepare them for a proper reentry to the community.

An acronym for Incarceration Doesn’t Define Us, the IDDU program was the brainchild of Ashtyn Foddrell, the community relations liaison for the police department, and served as her first major project since taking that position in August.

Eight people — six men and two women — graduated Thursday at a small ceremony at the Pepsi Building near the Community Market in Danville.

“We’re really excited because this program allows them to see their growth through that eight weeks and make them stay committed,” Foddrell said.

Each graduate received a framed certificate and a golden token signifying his or her achievement.

The program centered on a new topic or goal each week — such as money management, how to prepare a resume and apply for a job, how to apply for housing and how to sign up for GED or trade classes.

Rahiem Venable, one of the graduates, said the most important concept he came away with was the “sense of support” the program offered.

“It’s people welcoming and helping,” Venable said. “They’re not trying to judge, they’re not labeling you. They’re seeing the good in you. I think we need more people like that.”

Venable, 36, was joined at the ceremony by his 9-year-old daughter, Brielle. He said he was glad to have her there to share in his proud moment.

“It means a lot,” he said. “It’s hard making those phone calls from jail and not getting to see her. Now she can see her dad not in that negative light.”

He added that the program helped shape his own self image.

“I see myself more positive, and I feel like I can be a positive influence on others too as well for the people that’s been down the same path that I have,” said Venable, who spent 60 days at Danville’s Adult Detention Center.

Tory Coleman, another graduate, served 11 months at the Adult Detention Center, and he also spoke highly of the familial atmosphere he experienced as a member of the IDDU program.

“Coming through this program is a wonderful thing,” he said. “And knowing that when you think there’s no one out there to help you, there really is. And with this program, it’s shown me that.”

Coleman, 41, said he “lost everything” when he was incarcerated, and the IDDU program helped introduce him to the resources he needs going forward. He said he’s still waiting on a job to come through, but he’s planning on enrolling in an entrepreneurship program at Danville Community College.

“This was a new beginning to the life that I want,” Coleman said. “Everything that they offered has been a great service to the community for guys that have been forgot about or didn’t have nobody. There’s a feeling of family here.”

Foddrell said the police department plans to make the IDDU program a recurring initiative. The second installation of the program will begin Dec. 2, allowing Foddrell and the department some time to identify any gaps in the content and address them before the classes begin again.

But as the program’s first graduates enjoyed pizza, pasta and cake with their guests following Thursday’s ceremony, Danville Chief of Police Scott Booth scanned the room and noted the “positive energy.”

“To me, this is community building. It’s beyond community policing,” he said. “Community building is when everybody’s doing this together, whether you’re the police or a citizen or a returning citizen. This is making our community better. To be a part of that and to see the looks on people’s faces, how they feel finishing the program, there’s hope. They don’t feel like society has written them off. I’m very proud of what we’ve done here. I look forward to many, many more of these.”

Sentencing will be Feb. 24 for Antonio T-Quan Terry.

Antonio Terry is charged with shooting and killing Keenan Cunningham.

The Pittsylvania County Sheriff's Office is looking for a man suspected in a home invasion.

Jeremiah Jerron Turner, 20, was found dead in his home on Lakewood Park Drive in Martinsville.

The jury recommended a maximum sentence of 28 years.

The Danville Police Department has restructured its patrol of the city, splitting the city into quarters to focus more on neighborhood policin…

Corey Vershaun Johnson, already in jail on unrelated charges, will do 15 more years after admitting he shot an Axton man on Mother's Day 2018.

Danville arrested a 47-year-old Martinsville suspect in the death of a cab driver.

He was arrested after what police described as a "brief foot chase."

Darlene Rogers McCoy (left), a graduate of the Incarceration Doesn't Define Us program, poses for a photo with Ashtyn Foddrell, the community relations liaison for the Danville Police Department.

Rahiem Venable (center) and his 9-year-old daughter Brielle pose for a photo with Danville Chief of Police Scott Booth and Ashtyn Foddrell, the community relations liaison for the Danville Police Department.