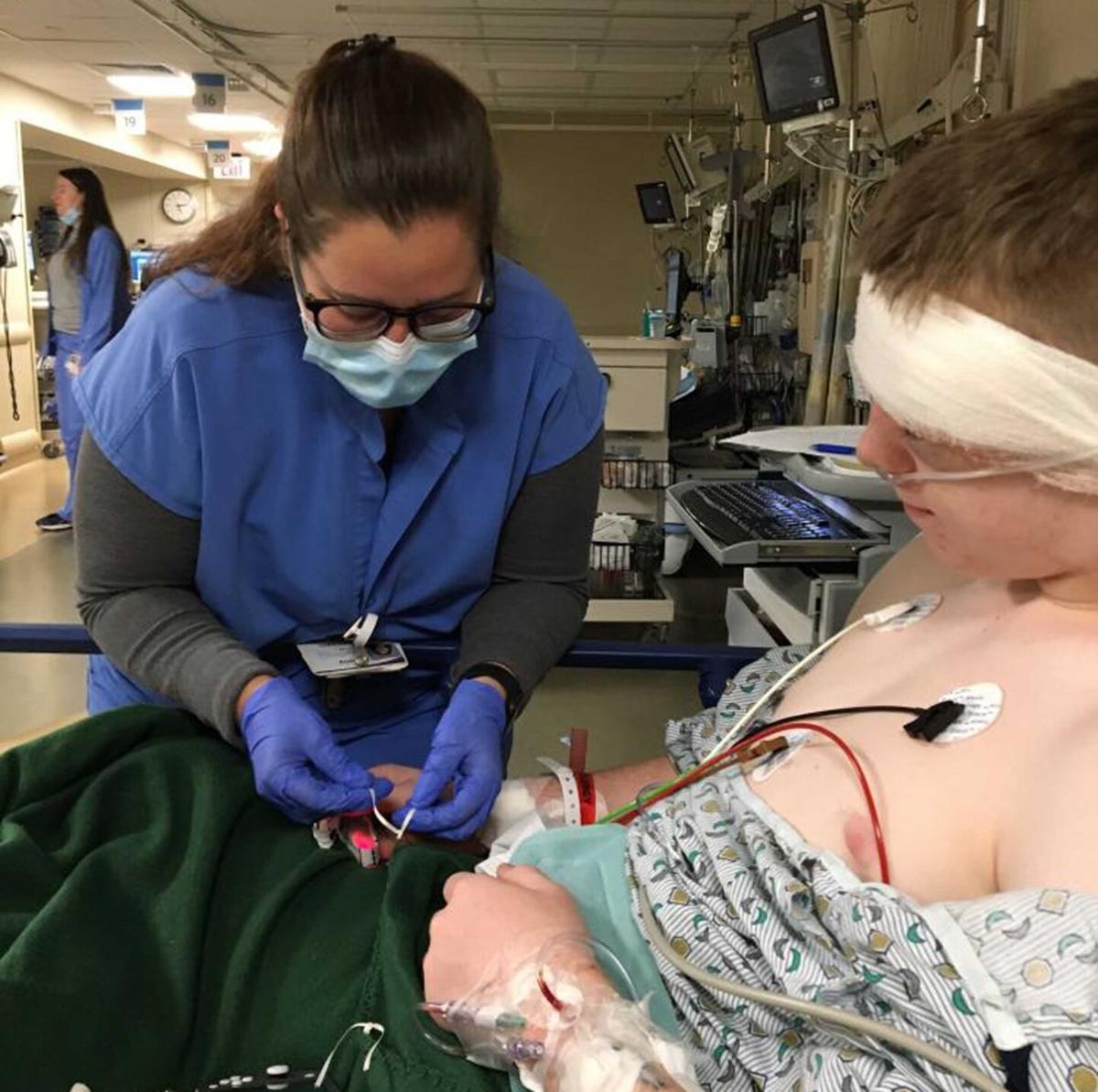 A nurse ties a knot in Landen Walker’s prayer blanket that he keeps with him as he faces his medical challenges. He had surgery Oct. 1 for a tumor in the cavity around his eye. 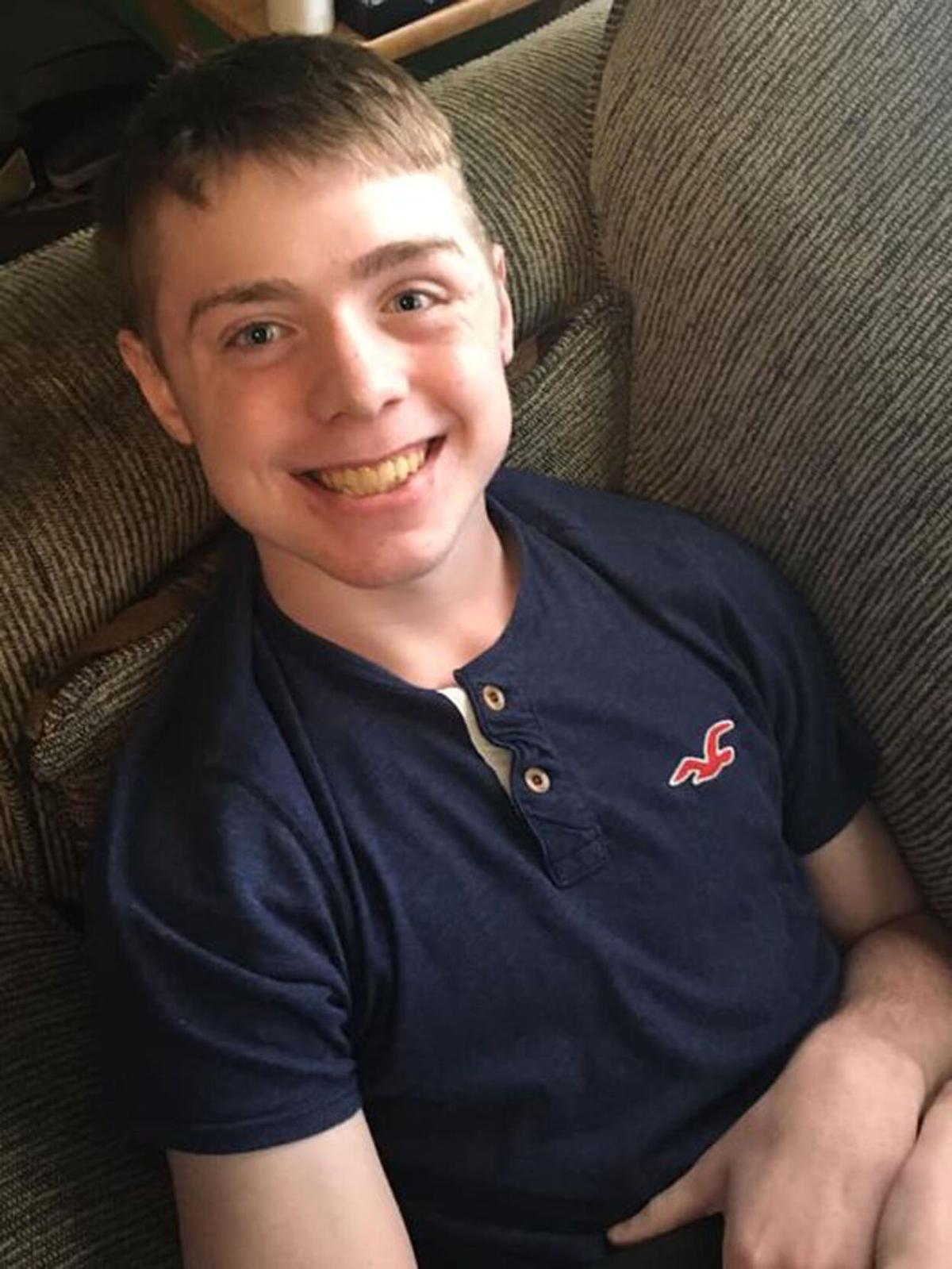 One week after returning from Pittsburgh after surgery, Landen Walker is smiling and his face is no longer swollen. He is on homebound school and looks forward to returning in person the middle of November.

A local teen is happy to be home after surgery in Pittsburgh on Oct. 1.

He admitted in a September Register & Bee article that he was depressed about the upcoming surgery — his fourth since 2018 — at the University of Pittsburgh Medical Center, which is No. 1 in the nation for the kind of procedure.

But back at home with his family now, he is feeling much better.

“I’m doing good,” he said, noting he was looking forward to seeing his girlfriend this weekend. He hasn’t seen her yet because she came down with a cold.

Walker was diagnosed in January 2019 with Juvenile Nasopharyngeal Angiofibroma, a condition found primarily in adolescent males. Only 50 cases a year are diagnosed in the United States.

He will eventually outgrow it, but it might not be until he is 30, according to Robyn Raines, who has been a mother to Landen and his sister, Kyndell, for 11 years.

“The tumor was completely removed,” said Raines. “The doctor said there was a gap in the bone from previous surgery and the tumor was between that and muscle. He also had two small holes on his brain, but the doctor was able to patch those up with a low risk of fluid leaking from his brain.”

The last tumor was discovered in July when Walker began having trouble with his vision and perception of color. An eye doctor couldn’t find anything wrong, and it turned out there was a tumor in the bone area between his left eye and ear.

Both a neurosurgeon and an ophthalmologist performed the surgery. A 1-inch incision was made at the corner of his left eye and the bone removed, then replaced.

“They also took fat from his stomach to fill in the gap where the tumor was removed and put 12 stitches in his stomach,” Raines explained.

The next day Walker had physical therapy to get him up and functioning again, and he left the hospital after one day to go to a nearby hotel to rest and recover.

“They took stitches out of his eye on Oct. 6. His eye was still pretty swollen, and he had double vision, which is normal,” Raines said.

Originally Walker was told he had to stay in Pittsburgh until last Wednesday, but they were able to come home eight days earlier.

“We didn’t tell anyone so we could surprise them at home,” Raines said. She sent a text to Kyndell that she had gotten a notice a package had been delivered on the front porch.

But when Kyndell got there, she found her brother instead and gave him a big hug.

Walker is now on homebound school and hopefully will go back in person on Nov. 15. He isn’t able to pick up anything that weighs more than 5 pounds and isn’t supposed to bend over, she said.

“He doesn’t like to be still and wants to be helpful,” Raines said. “But his scar just looks like he has been scratched by a cat.”

They have to be watchful about fluid leaking from around his eyes from the two patched holes in his brain. He will have scans done in three months at the University of Virginia.

Walker doesn’t have much to say about the surgery.

“To be honest, I don’t want to think about it,” he said. “I am hoping this will be the last time.”

He did want to thank everyone for praying for him.

“I really do appreciate it,” he said. “I love everyone who has been helping me, no matter what.”

Last Thanksgiving, Landen Walker and his family didn’t realize they had a harrowing year ahead of them, but this year they are feeling thankfu…

At Thanksgiving the family of Landen Walker was grateful his second surgery for a rare type of tumor was a success. But on Dec. 12, the family…

A nurse ties a knot in Landen Walker’s prayer blanket that he keeps with him as he faces his medical challenges. He had surgery Oct. 1 for a tumor in the cavity around his eye. 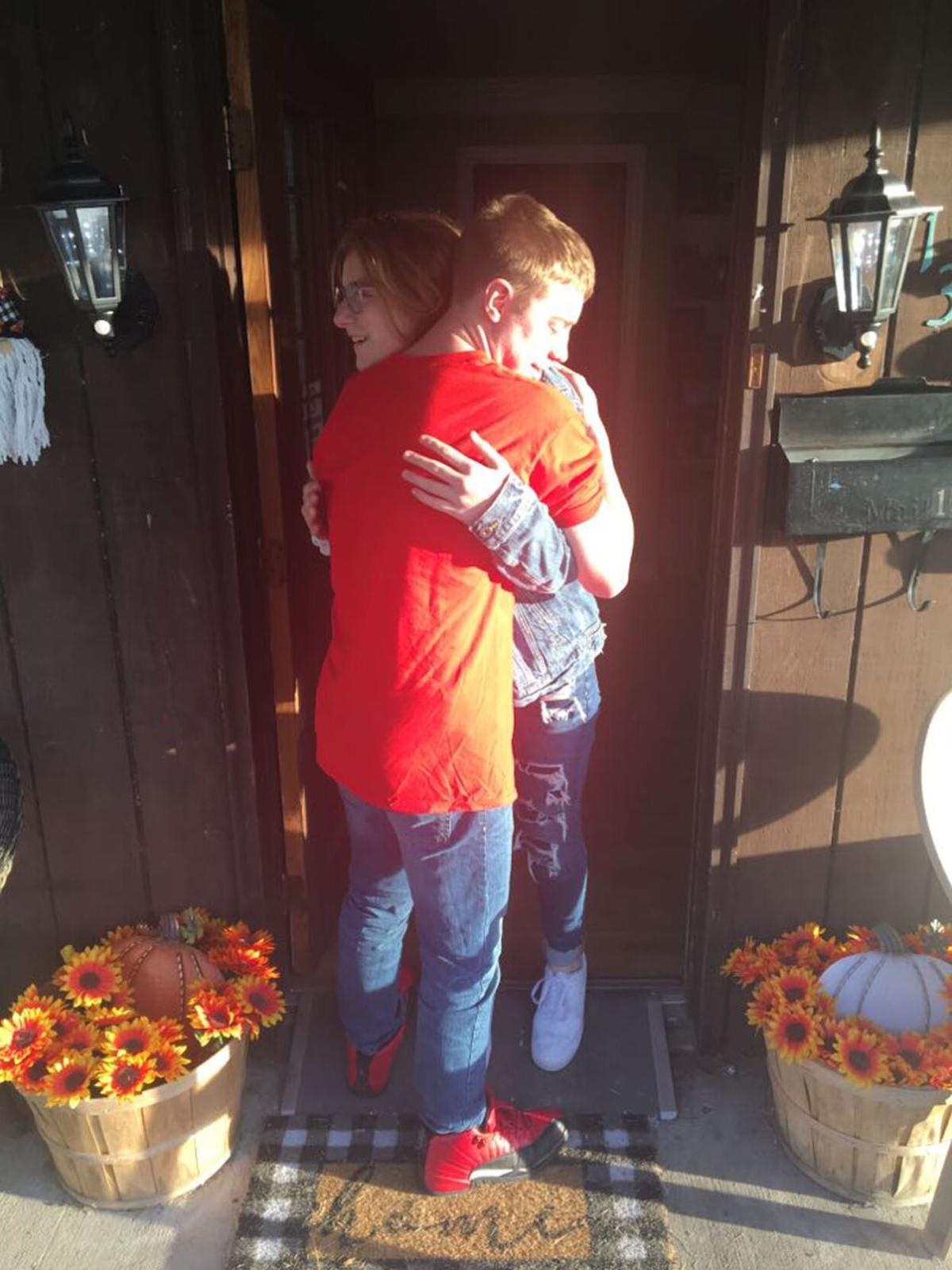 Landen Walker hugs his sister, Kyndell, on the porch as he came home from surgery in Pittsburgh. He came home from the hospital earlier than he expected and surprised her.

One week after returning from Pittsburgh after surgery, Landen Walker is smiling and his face is no longer swollen. He is on homebound school and looks forward to returning in person the middle of November.