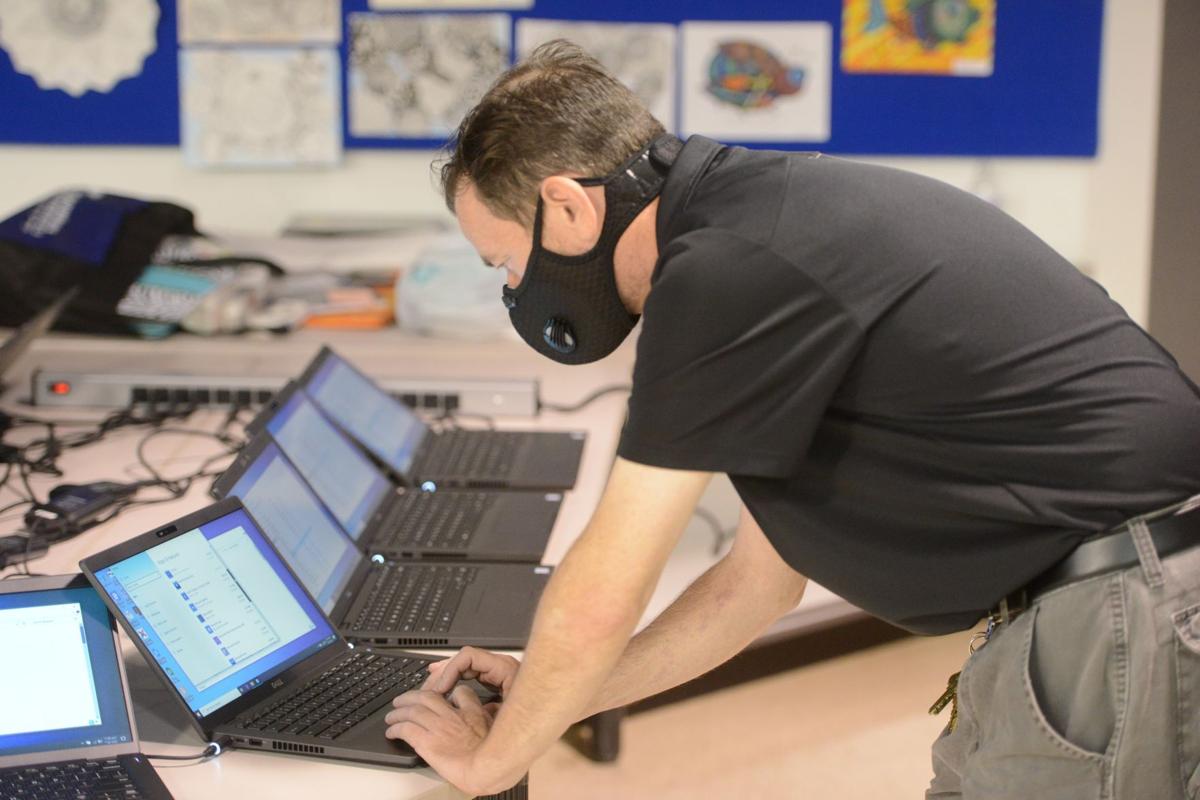 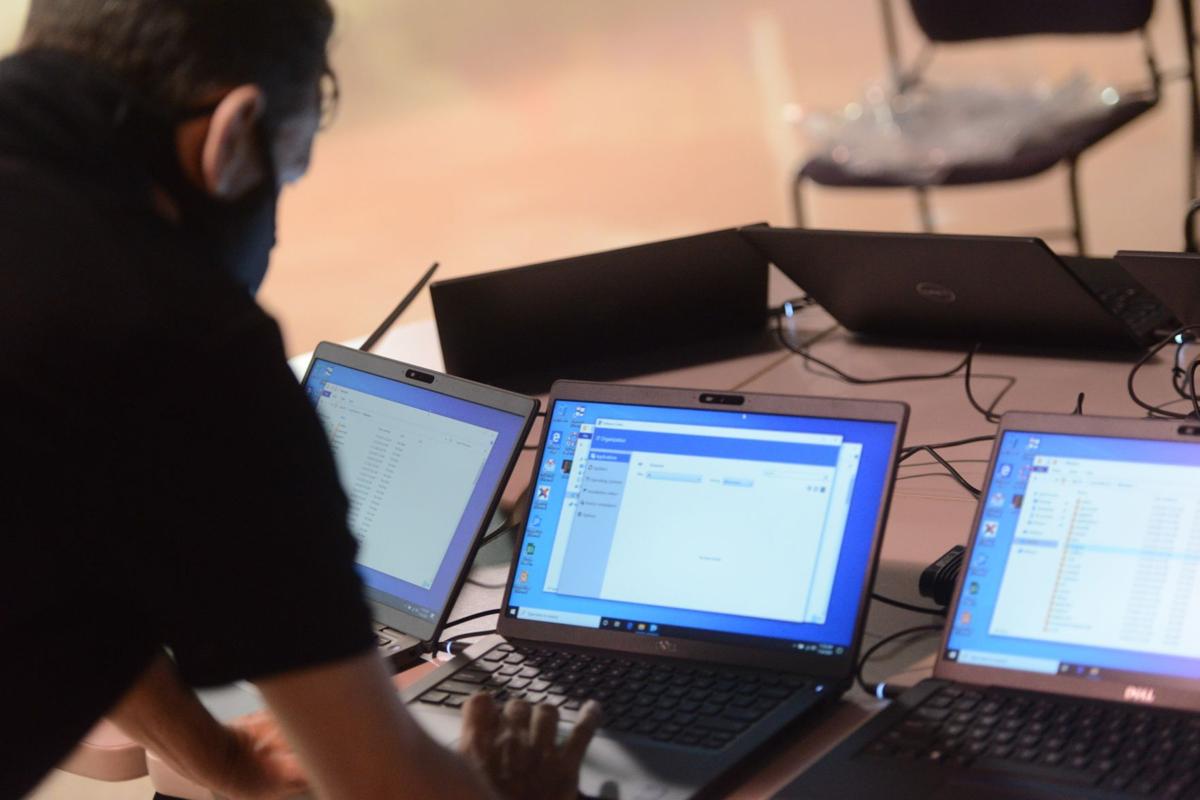 Danville Public Schools has spent nearly $2.7 million this summer on technological upgrades to facilitate virtual learning for this fall.

The funds came from the $3.2 million the district received from the federal Coronavirus Aid, Recovery and Economic Security (CARES) Act in late March.

Director of Technology John Parris said the purchases — which range from laptops to cellular hotspots to WiFi capability on buses — allow the school division to be flexible and accommodating during a school year that will see at least some measure of virtual learning.

“In terms of the actual hardware, we have a device for every student, every teacher and all essential staff,” Parris said. “From a technology perspective, I would say we’re in as good a shape as we could possibly be.”

The Danville School Board is currently considering a reopening proposal that includes nine weeks of virtual learning at the start of the year with the only exceptions being preschoolers, English learners and special education students.

Six weeks into that period, Interim Superintendent Catherine Magouyrk is to make a recommendation to the school board regarding the feasibility of in-person instruction starting in the second quarter, when parents will be able to choose between that option or to continue with virtual learning for their children.

Starting on Monday, parents can access the registration form on the DPS website, and forms also will be mailed from each school. Parents will decide on the second-quarter in-person or virtual learning option for their child by Aug. 7.

The current reopening proposal needs to be approved by the Virginia Department of Education before the school board can vote to approve it. But with the rising count of coronavirus cases in the city and greater Dan River Region, a virtual-heavy model to start seems to be an agreeable option.

“I like this plan,” school board chair Crystal Cobbs said when presented with the plan Thursday. “I feel comfortable with them starting off that way because our [COVID-19 case] numbers are higher. Health and safety is at the top [of our priorities].”

Danville has seen seven days this month with nine or more new cases, with some days reaching 19 or 22 new cases. The proposal to at least start with virtual learning appears to be made in recognition of the ongoing public health crisis.

“As far as the virtual plan, it’s something we need to take a hard look at because our region specifically is experiencing an increase in COVID-19 cases,” school board member Brandon Atkins said after hearing the plan Thursday.

Technology upgradesParris said all of the new technology purchases will make it easier to facilitate virtual learning on a grand scale.

“When we started off, the goal was to be ready for any scenario from a technology perspective. We didn’t want to be the barrier,” he said. “The primary goal with the technology plan was to accommodate any plan.”

To start, the district spent approximately $579,000 on 500 laptops for teachers and other student-facing instructional staff so they were all working with the same equipment. When school stopped in March, it was clear some teachers were working with outdated computers, which made troubleshooting and connecting with students more difficult. Nearly $200,000 was spent on laptops for other essential personnel.

The biggest expense in this round of purchases was $963,000 for 116 Chromebook carts for all K-5 classrooms. Paris said the district already had enough devices for every middle school and high school student to take one home to work with; it was at the elementary school level where the district had to invest to make sure each of those students had a device as well.

The district spent $122,000 on 22 iPad carts for the preschool level in case those students ended up learning virtually as well. Parris acknowledged the current reopening proposal includes having preschoolers learn in person five days a week, but those students will still be able to benefit from this technology in the classrooms.

He added the iPads, with touchscreens and swiping capabilities, are easier for children of preschool age to use compared to more traditional computers. The K-2 Chromebooks, he said, also are touchscreen-based.

“It’s more of a cost, but for that young of a grade level, we thought it was important,” Parris said.

The district also spent $450,000 on 1,800 cellular LTE hotspots with one year of unlimited data to provide to students who do not have reliable internet connections at home. Along with providing devices for elementary school students, internet connectivity was another key area Parris said the district needed to improve if virtual learning was going to take place.

The buses will primarily be used to deliver three meals per day — up from the initially planned two — at more than 20 distribution sites around the city. Equipping the busses with WiFi would allow students to access the internet and complete schoolwork nearby if that need arises.

The collective cost came out to approximately $2.69 million.

“The goal with purchasing this technology was to give us the flexibility for anything that came up this fall,” Parris said. “When we started doing this in April, the only thing we knew about what learning would look like in the fall was that we really had no idea.”

With these upgrades, that picture becomes a little clearer.

Teacher union reactionThe Danville Education Association, which represents the city’s teachers, was in favor of having remote learning to start the year, according to President Kim Roberson.

The plan to start virtually, she said, gives the school district time to see if coronavirus cases will recede later into the fall.

“More and more, we felt like we needed to start virtually to begin with and go from there because there were just too many concerns about safety,” Roberson said.

To that end, Roberson was pleased with the district’s decision to purchase so much technology that will facilitate a successful virtual learning venture.

“That was really a plus,” she said. “They’ve definitely made that investment to make sure we can proceed.”

Roberson also agreed with the school board’s decision Thursday to approve a new academic year calendar — one that has students starting Aug. 24 and ending June 2. That plan pushes the starting date back two weeks from Aug. 10.

The district’s teachers will now have three full weeks, from Aug. 3 to 21, to prepare to teach virtually and engage in professional development toward that goal.

In the adopted calendar, the Presidents’ Day (Feb. 15) holiday is removed and added to instructional days, but Memorial Day (May 31) is added to the school year and recognized as a holiday.

School will let out June 2, which means employees on 10-month contracts that end in May will be expected to work two days into June. They will be compensated for those days in the first of their 10 monthly payments in August.

Overall, Roberson said the position of the DEA is pushing back the start date will give teachers more time to prepare for a potentially challenging school year. Further, starting virtually is the safest course of action.

“Our stance is to go hybrid when it’s safe to do that,” she said. “There’s so much concern right now about safety, and that has to be paramount, not only for students but for the staff of the school.”

Virginia schools won't receive normal accreditation ratings from the Department of Education for the next two years.

The Danville Public School board, after initially hearing one proposal for a modified academic year calendar last week, is now considering fiv…

Catherine Magouyrk has been in Danville only for a short while, but she has quickly found her footing as interim superintendent of Danville Pu…

CHATHAM – In what principal Jason Reece described as an effort “to keep some sense of normalcy,” Chatham High School began their nontraditiona…