Pittsylvania County native Joe Mantiply honored by Board of Supervisors.

The Pittsylvania County Board of Supervisors adopted a resolution Tuesday night honoring the Dan River Region native and his myriad accomplishments.

Mantiply’s stellar career started back at Tunstall, graduating with a 31-1 record. He also had 328 career strikeouts and a career ERA of 0.97.

Although drafted by the New York Mets in 2009, he instead went to Virginia Tech, where he continued to hone his pitching craft. In his junior season, the Philadelphia Phillies drafted him in 2012.

Finally, in 2013, he was drafted by the Detroit Tigers and his professional debut came with the Connecticut Tigers.

Playing for the New York Yankees twice, he then signed with the Arizona Diamondbacks in 2020.

In July, he made his MLB All-Star debut.

“It is my wonderful pleasure to recognize and honor an outstanding young man and his family,” said Bob Warren, a supervisor for the Chatham-Blairs district, as he read the resolution.

“Before we make the presentation, I think you need to know a little more about the inside of this story,” Warren explained. “This young man had great support with this family, but he has determination that just blows your mind.”

Warren pointed to setbacks with injuries and surgery. But Mantiply never gave up.

“But he taught us all something ... you don’t give up on your dream and you don’t quit,” Warren said.

The Mantiply family, an athletic clan, are “great ambassadors” of Pittsylvania County.

“We appreciate you all very much,” Warren said, before calling on Mantiply and his family to accept a framed resolution.

After shaking the hands of all supervisors, Mantiply said he was happy his family could stand with him to accept the honor.

“I wouldn’t be where I am without this group of people right here,” he said. “”They pushed me to keep going.”

On Sunday, he was inducted into the Pittsylvania County Sports Hall of Fame.

Pittsylvania County native Joe Mantiply honored by Board of Supervisors. 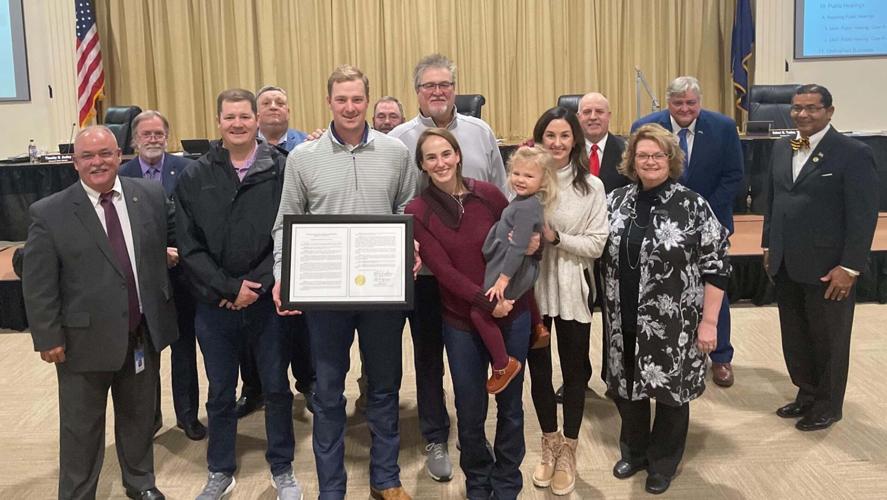 National League relief pitcher Joe Mantiply, of the Arizona Diamondbacks, throws to a American League batter July 19 during the fifth inning of the MLB All-Star Game in Los Angeles. Mantiply is from Danville and played at Tunstall High School and Virginia Tech.