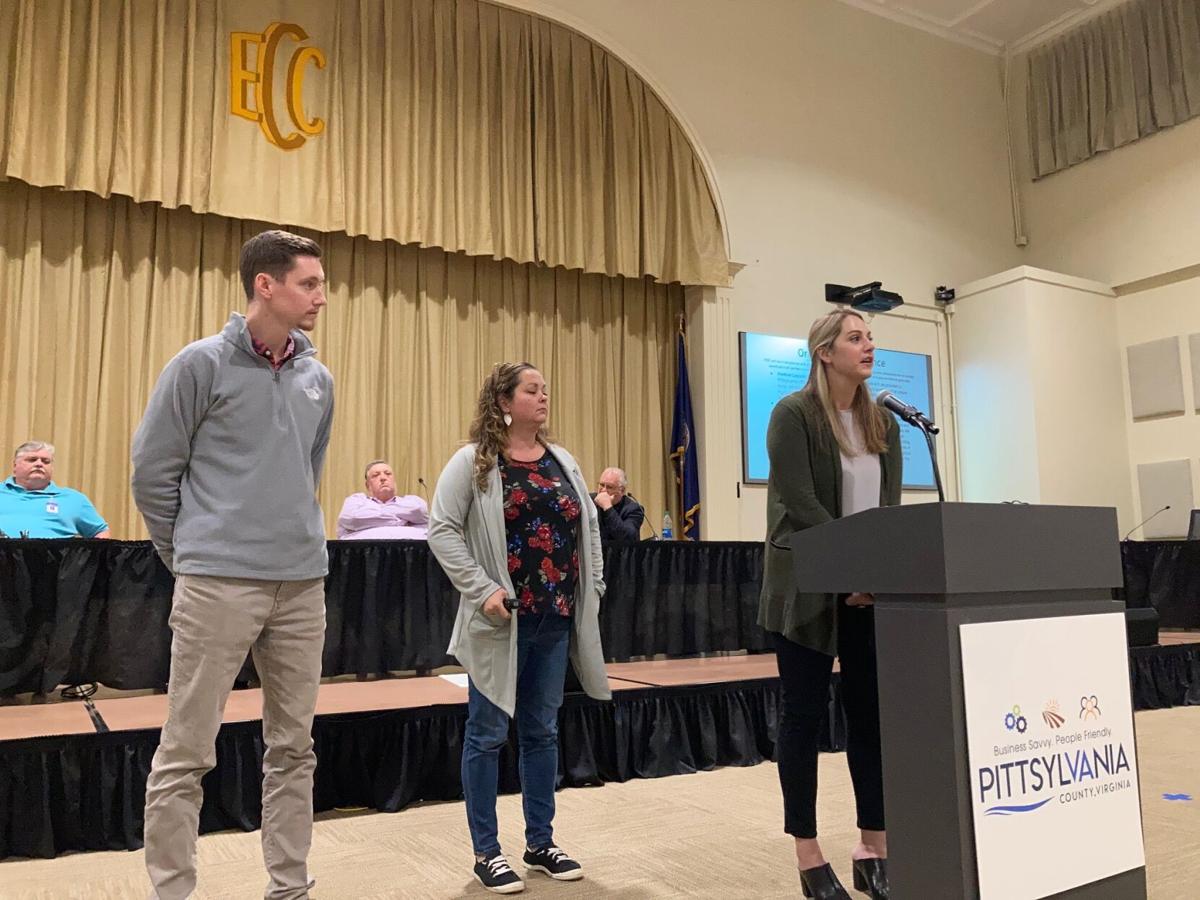 Purpose Driven Events CEO Jonathan Slye, far left, Chief Operating Officer Terry Wecker, center and Director of Operations Cara Fischer talk about their plans for concerts and music festivals at the Blue Ridge Amphitheater in Blairs, during an informational meeting in Chatham in May. Their Blue Ridge Country Music Festival was postponed until next spring after Pittsylvania County officials rescinded permits due to lack of compliance with the county’s music festival ordinance. 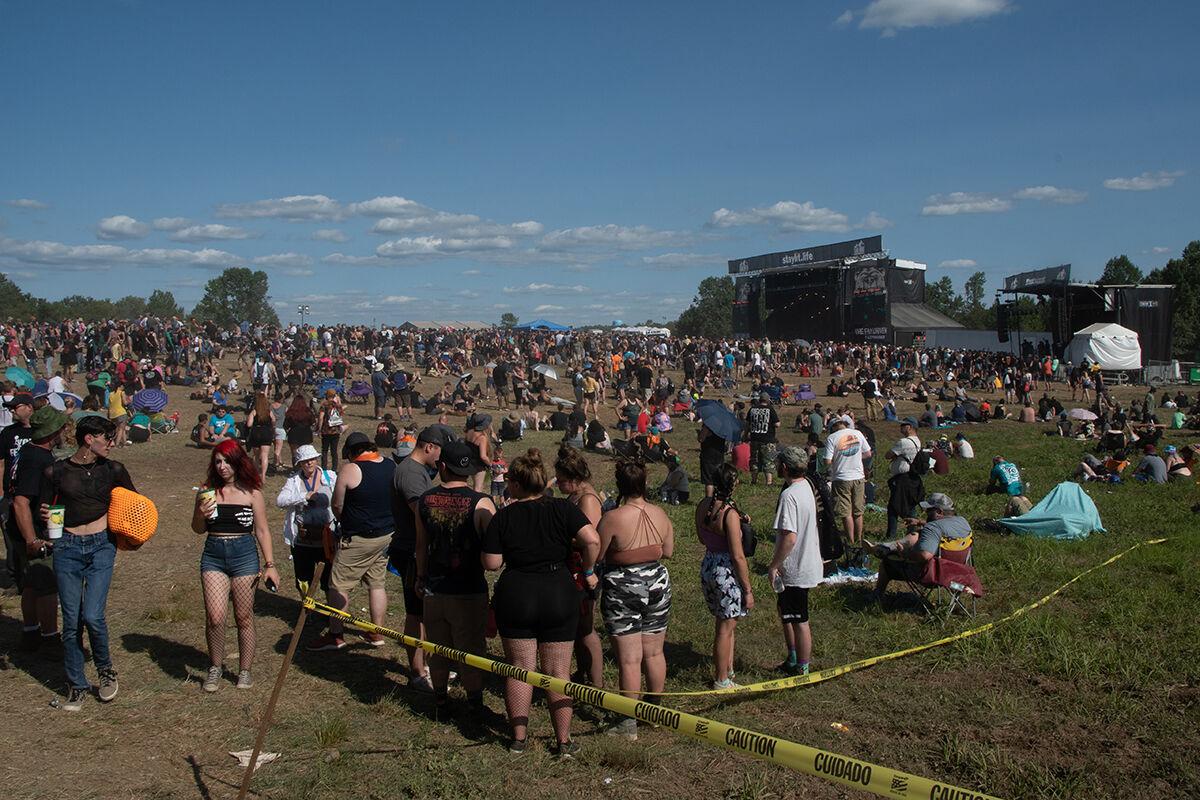 A large crowd gathers to listen to music Sept. 11 at the Blue Ridge Rock Festival.

This weekend's Blue Ridge Country Festival has been postponed until next spring due to lack of compliance with Pittsylvania County's music festival ordinance.

The county notified organizers on Sept. 21 permits for the festival were rescinded, nearly a week before organizers informed ticketholders of the three-day event's postponement. The festival was scheduled for this coming weekend.

"Specifically, the county does not possess sufficient or approved plans relating to among other things, traffic, parking, camping, and security, nor do we possess a finalized site layout for the festival and camping areas," County Administrator David Smitherman wrote in the Sept. 21 letter to Jonathan Slye, CEO of the event's promoter, Purpose Driven Events. "Many of these issues require a lead time of review that is not possible given the 10 days remaining before your event."

In addition, Smitherman wrote the county would not issue permits for the festival until it receives full proceeds from the meals tax from food and beverages sold at both the Worship at the Mountain Festival and the Blue Ridge Rock Festival this month.

"These funds were due to be provided to the commissioner of the revenue, Ms. Robin Goard, on Friday Sept. 17, 2021, but I understand there has been a miscommunication regarding this matter," Smitherman wrote. "Please remit full county meals tax proceeds by hand delivery or overnight delivery post haste."

Also, additional outstanding county bills from the Blue Ridge Rock Festival and the Worship at the Mountain Festival must be paid in full, or an additional $500,000 bond would be required for the country festival, Smitherman wrote.

But Purpose Driven Events director of operations Cara Fischer said, "The food vendors for the Worship at the Mountain Festival are responsible for submitting their own meals tax as we did not aggregate or collect funds from them. In a meeting on Friday of last week, the Meals Tax Investigator confirmed that all vendors had mailed in their checks for the meals tax. Purpose Driven Events has paid all meals tax in full for the Rock Festival."

The country festival was supposed to take place at Blue Ridge Amphitheater this weekend and feature about two dozen performers including Darius Rucker, Toby Keith and others.

Festival organizers wrote in an email to ticketholders Monday afternoon the event would be postponed to May 13-15.

Tickets, parking, camping and lockers for ticketholders are automatically rolled over to the new 2022 dates, the email stated.

In the email, organizers cited COVID-19 concerns and said the postponement was at the request of local health officials. But the Virginia Health Department said no such request was made through the Pittsylvania-Danville Health District.

Also, since there is no declared state of emergency, the department would not have the authority to cancel the event.

In an email to the Danville Register & Bee on Tuesday, Fischer said they were not referring to the health department in emails to ticketholders.

"After receiving letters from our local health leaders and hospitals, a mutual decision was made with government officials that it was unsafe to continue with the country festival on its initially scheduled weekend," Fischer wrote. "COVID cases and deaths are actually at an all-time high in this jurisdiction at present, and all medical facilities are at full capacity."

If someone needed medical transport from the festival, they would have to be taken to Greensboro, North Carolina, or Roanoke to receive treatment, Fischer added.

"That is simply unacceptable," she said. "Our number one priority is the safety of the community, festival patrons, staff, and participating artists."

Also, Smitherman's letter to organizers does not mention COVID-19 or anything related to the pandemic.

But according to a statement from Pittsylvania County on Tuesday afternoon, the event's promoter told county officials that it was "highly likely that the event would be postponed due to the COVID-19 pandemic and said that, as a result, he would not move forward with providing the requested documentation."

"The next day, the event promoter informed Pittsylvania County that he was working with artists and other parties to make a formal postponement announcement, which was released to ticketholders on Monday and the general public today," Pittsylvania County Spokesperson Caleb Ayers wrote in the statement.

The application by Purpose Driven Events for the country festival was approved by the Pittsylvania County Board of Supervisors in June, with conditions that the promoters would provide proper plans and final documentation for traffic, parking, camping, security and other items.

Fischer told the Danville Register & Bee Tuesday preliminary plans were submitted to the county before the permit approval vote at the June 22 board of supervisors meeting.

"We continued to revise planning documents through the preparation process," Fischer said.

She added that on Sept. 20, two government officials notified Purpose Driven Events that a postponement of the festival was possible due to COVID-19 concerns.

"At that time, the final decision about the country festival dates had not yet been made, so we submitted additional permit documents to the county and held meetings with county officials," she said.

She said media reports that the promoters provided false information about the postponement were inaccurate.

"We did not submit the remaining documentation needed for the Blue Ridge Country Festival's permit, due to the impending verdict to postpone the event," Fischer said. "Prior to yesterday's announcement, we had many discussions with state and local agencies to come to an agreement about the postponement."

"However, those final documents were never provided, Purpose Driven Events never paid the required permit fee, and an actual permit was never officially issued," Ayers wrote in the county's statement.

"That letter offered Purpose Driven Events several steps to complete by Thursday, Sept. 23 if they wished to move forward with planning their event and obtaining an official permit," he wrote.

Ayers added that while the permits were rescinded, the event's promoters stayed in contact with county officials and and maintained that COVID concerns would have likely required postponement of the festival.

"The requested documentation was not provided due to these COVID-related concerns," Ayers wrote.

The cancelation comes after reports of positive COVID-19 cases among attendees of the Blue Ridge Rock Festival.

Local hotels were feeling the economic effects of the festival's postponement as early as Monday just after ticketholders were informed.

Kesha Merritt, guest services supervisor at the Best Western Windsor Inn & Suites on South Boston Road, said she and the chain's two other hotels in Danville received about 15-20 cancelations within 20 minutes Monday evening.

"It's been an impact," Merritt said at the Best Western front desk Tuesday morning. "We were geared up and ready for it."

At least five more cancelations had been made by late Tuesday morning, she said.

"We were looking forward to guests coming in," Merritt said.

However, some of those rooms will be filled up again for a race at Virginia International Raceway next week, she added.

Hewa Jayawardeena, owner of Exxon River Street Mart, estimated he would lose about $2,000 in sales due to lost business from the postponement.

Purpose Driven Events CEO Jonathan Slye, far left, Chief Operating Officer Terry Wecker, center and Director of Operations Cara Fischer talk about their plans for concerts and music festivals at the Blue Ridge Amphitheater in Blairs, during an informational meeting in Chatham in May. Their Blue Ridge Country Music Festival was postponed until next spring after Pittsylvania County officials rescinded permits due to lack of compliance with the county’s music festival ordinance.

A large crowd gathers to listen to music Sept. 11 at the Blue Ridge Rock Festival.