'This is the new Danville.' Architectural design of casino — featuring iconic smokestacks — revealed in ceremony
0 Comments
Share this
{{featured_button_text}}
SUSAN ELZEY Special to the Register & Bee

“Exciting” was the word of the day as the architectural renderings of Danville’s future casino resort were revealed at a Thursday ceremony at the Institute for Advanced Learning and Research.

“This is a milestone moment,” said Danville Mayor Alonzo Jones. “There is great anticipation and excitement here.”

Jones, members of Danville City Council, Del. Danny Marshall and other city and educational dignitaries were present as representatives of Caesars Entertainment shared slides overhead of the planned Caesars Virginia.

The $500 million resort is expected to break ground by the end of the year in Danville.

“We started this design journey in January, and I read the development agreement over and over, which was our guardrails,” said Robert Livingston, senior vice president of development with Caesars Entertainment. “We have this iconic brand Caesars we have to live up to and then we have this rich history of Danville, Schoolfield and the Dan River Mill, and we have to blend all these together . . . that was the big challenge.

“The biggest thing was that we had to listen and learn about this community, and hopefully you will see this in the renderings.”

The renderings revealed plans to include a $500 million destination resort casino, which is $100 million more than initially anticipated in the development agreement, and 500 rooms inspired by local scenery, which is 200 more rooms than initially anticipated in the agreement, according to Caesars. There will also be a spa, pool area and fitness center.

The casino will feature more than 1,400 slot machines and table games, Caesars Sportsbook and WSOP Poker Room, a live poker room named for and carrying the spirit of the legendary World Series of Poker with 25 tables, Caesars Entertainment said.

Meeting and convention space will total 40,000 square feet with an entertainment venue to accommodate up to 2,500 guests. There will also be restaurants and bars, the press release states. Nine hundred construction jobs will be filled as well as 1,300 operational jobs.

Livingston said that the name of Gordon Ramsay will be on a couple of the restaurants.

“We are looking forward to making you proud as we build this casino,” he said. “We’re excited to be here, and it’s an exciting time for Danville and this part of the country.”

Mark Schlang, senior director of design and construction for Caesars, said that hundreds of people are working on this project.

“We’ve been doing this for 26 years, and there’s never been a group as engaged in this design. We looked at how to take Caesars and let it feel like Danville,” he said. “It’s all about providing for the customers.”

The architectural firm for Caesars Virginia is Marnell Companies.

Dave Howryla, president of architecture with Marnell, explained the renderings of the exterior and interior of the resort.

“The Three Sisters [three brick smokestacks] are the best element on the site, and everything is based on them. They will be cleaned up and they will be the focal point,” he said.

He described the building as “very large with a lot of components to break down.”

The company got original images of the brick mill building and based the design of the casino on those. The 18-story hotel was kept lower than the Three Sisters, and a four-story parking garage is nestled into the terrain to look like two stories.

The Caesars-branded hotel rooms are “real modern, clean and comfortable” and based on Caesars color palette.

“Marnell pulled it off. We built a team and blended culture,” said Livingston. “Bringing Southern hospitality to Caesars is exciting. Howryla called it a ‘unique challenge’ to bring the legacy of Caesars to the rich history of Danville.”

“That was the most challenging and the most rewarding, and we are looking forward to the next step,” he said.

Del. Danny Marshall, who was hailed as the one who originally brought the idea of a casino resort to City Council, said, “It’s another great day for Danville and Southside.”

Jones remarked that members of City Council have spent many late nights on the project.

“City Council has done an amazing job,” he said. “I’m very excited about the way this project turned out.”

Neal Morris, chairman of the Danville Industrial Authority, called the renderings “long anticipated” and looked forward to even more excitement in the city as construction begins”

Livingston said that the construction will begin with changing the brown site to a green site, beginning with tearing down the water tower sometime next week. Permitting will happen the middle of November, and ground will be broken in December. The anticipated opening will be in late 2023.

To follow the progress of the project, visit www.caesars.com/destinations or www.facebook.com/CaesarsVirginia.

Do you ever wonder how many people have stepped foot on the Moon?

Do you ever wonder how many people have stepped foot on the Moon?

Months after being on a ventilator, Danville woman struggles with COVID-19 impacts

Danville woman struggles with COVID impacts months after being on a ventilator.

The Dan River Region is in a slow growth trajectory.

Caesars Virginia revealed the architectural design for Danville’s upcoming casino. It will feature “Three Sisters” smokestacks, a nod to the textile roots of the city. 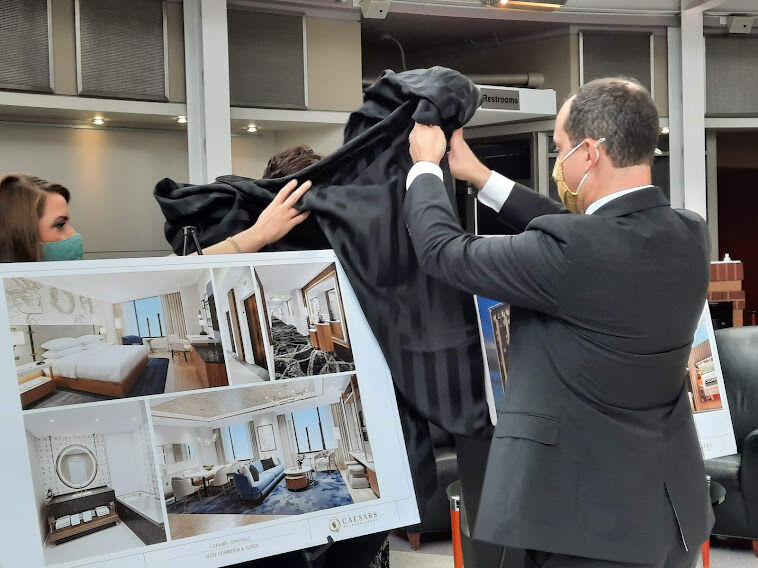 Steven Gould, an attorney with Byrnes Gould Law in Danville representing Caesars, unveils the architectural renderings of Caesars Virginia at a ceremony Thursday. 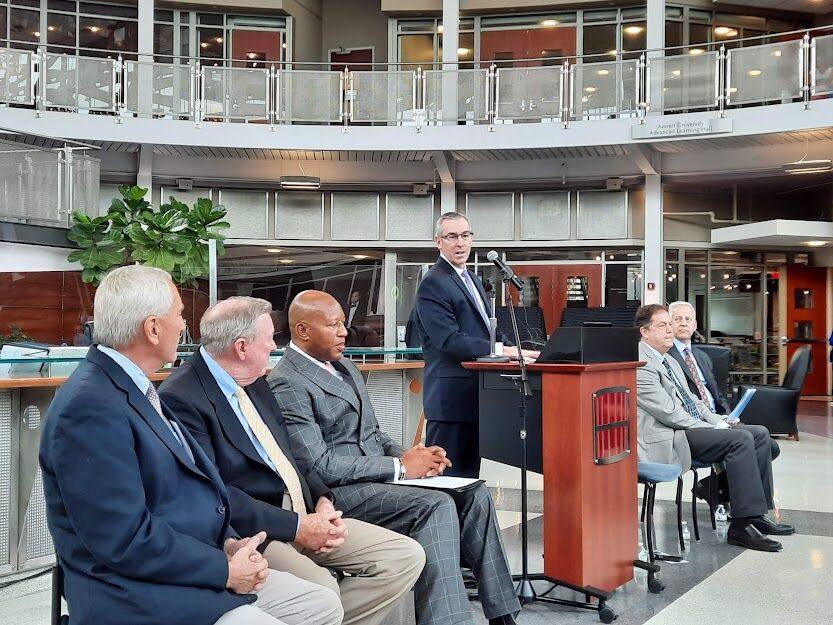 Robert Livingston, senior vice president of development with Caesars Entertainment, speaks at the crowd gathered at the Institute for Advanced Learning and Research Wednesday for the unveiling of the architectural renderings of the proposed Caesars casino resort. From left are Del. Danny Marshall; Neal Morris, president of the Industrial Development Authority; Danville Mayor Alonzo Jones; Livingston; Mark Schlang, senior director of design and construction of Caesars; and Dave Howryla, president of architecture of Marnell Companies, the architects of the project.