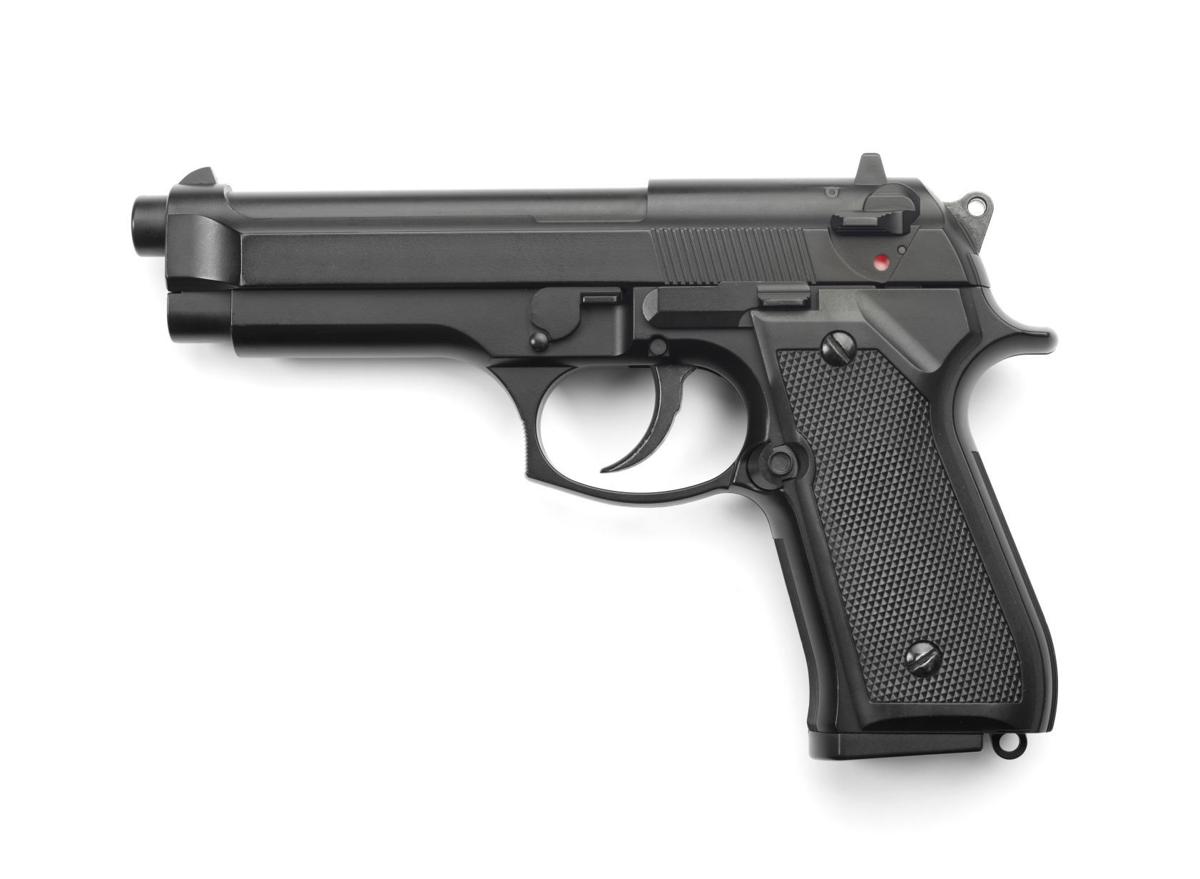 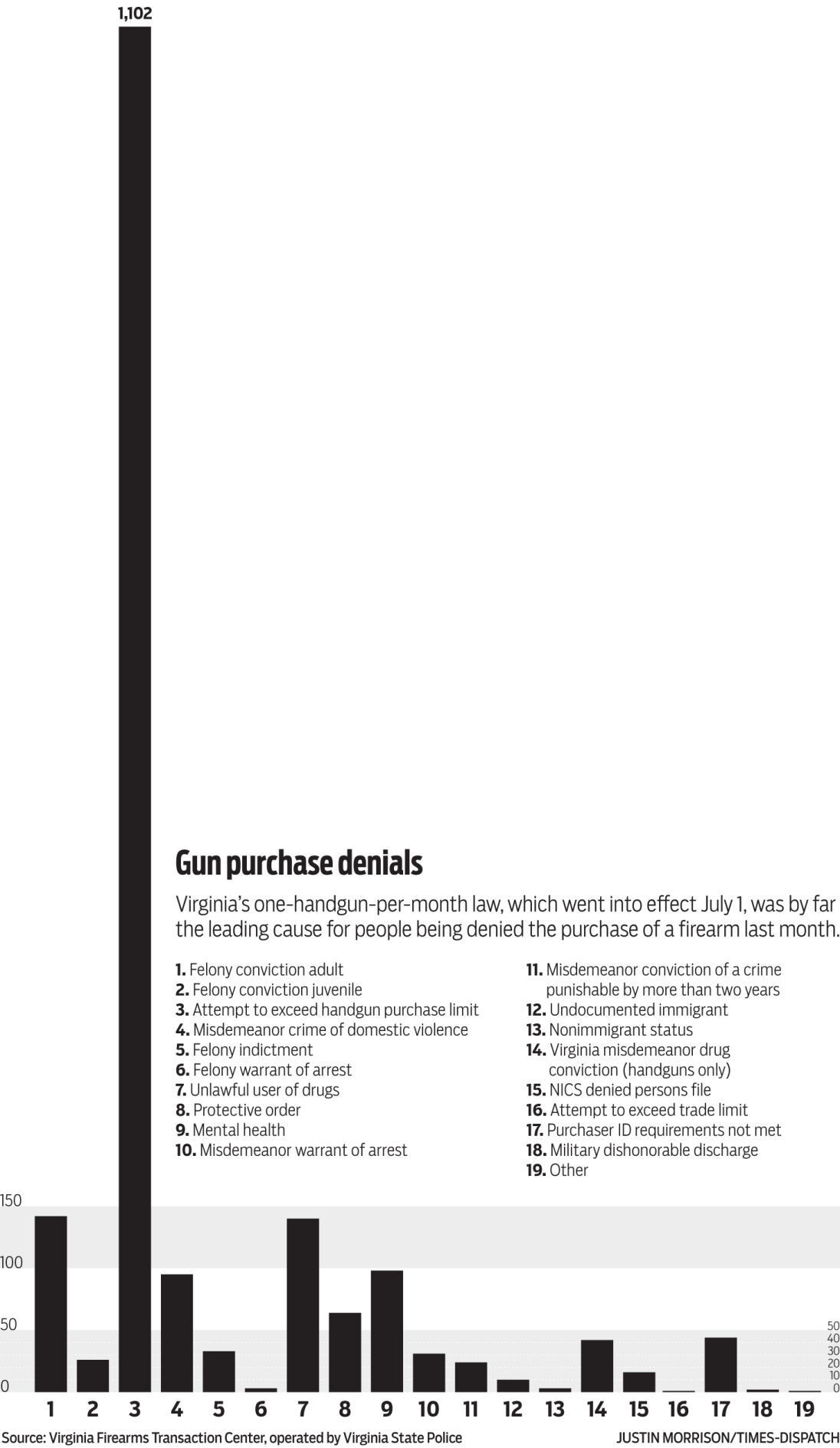 Virginia’s one-handgun-per-month law, which went into effect July 1, was by far the leading cause for people being denied the purchase of a firearm last month.

Virginia's new one-handgun-per-month restriction resulted in 1,102 people being denied the purchase of a firearm during the law's first month — by far the largest percentage of the 1,877 denials issued in July by the Virginia Firearms Transaction Center.

The high number of denials is due in part to confusion among firearms dealers and their customers about how the monthly or 30-day restriction period is calculated. Many believed that the law would not apply to purchases they made during the month before the law went into effect on July 1.

"It was confusing," said Mark Tosh, president of Town Gun Shop Inc., with stores in Martinsville and Chesterfield County. "I think it caught a lot of people off guard, because everybody thought, OK July 1, and now the clock starts ticking if you buy a handgun. If I buy one July 1, then by Aug. 2 I should be fine [to buy another]. But nobody knew they were going to go back into June. I think that's why you saw so many denials."

The Democratic-led General Assembly earlier this year reinstated the one-handgun-per-month law that limits people, with some exceptions, from buying more than one handgun per month. A nearly identical law was enacted in 1993 but was repealed in 2012 by the then-Republican-controlled state legislature.

Jerry Cochran, owner of Trader Jerry’s, one of Virginia’s largest federally licensed firearms dealers, said his store saw a record number of denials for a single day on July 1.

"They made it retroactive and did not tell us, that's the deal," Cochran said. "We had no idea. We could have asked [customers] if they had purchased a gun in June."

The 1,102 gun purchase denials for exceeding the handgun limit accounted for 59 percent of all denials statewide in July, firearm transaction records show. Denials for having a felony conviction ranked a distance second, with 142. That was followed by denials for being a user of unlawful drugs, at 140.

Asked about how the law has been misinterpreted, Virginia State Police spokeswoman Corinne Geller said, "The plain language of the legislation on the new 30-day limitation on handgun purchases prohibits someone from purchasing a handgun after June 30, 2020, if that same individual also bought one within the previous 30 days - unless the purchaser is covered by an exemption to this statute."

The confusion, however, persists.

Robert Marcus, the principal owner of Bob’s Gun Shop in Norfolk, another one of the state's top gun dealers, said he believes part of the problem rests with how legislators labeled the law: one handgun per month.

"The vast majority of people ... think that means you can buy a gun on June 30, and then buy another on July 2, because it's one gun a month," he said.

But the law is actually "one handgun in a 30-day period," Marcus said. "And it's not even 30 days, because you have to wait an additional day if the month preceding it had 30 days."

Complicating matters, Marcus said his store has experienced a "tremendous number of delays" in getting customers' background checks approved by state police.

He said there have been instances were customers whose background checks are delayed will then go to another store and try to make a purchase there, thinking that that store may be able to process the check faster.

"Since they didn't take possession of a gun in my store, they figure they're OK to make another purchase somewhere else," Marcus said. "These people are not trying to evade the law; they simply want to make a purchase."

But the customers ran into difficulty because the background check that was being processed at Marcus' store was still pending.

"We've had a number of instances where a store will call us and say, 'Would you please contact state police - your customer is here and wants to purchase a different gun,'" Marcus said. "And we call [police] and say, 'Hey, that person's sale wasn't completed' - and they're able to negate that."

"There's a lot of confusion out there all the way around," he said.

In an attempt to reduce the number of denials that waste time, Marcus' employees now ask customers upfront whether they have purchased, or attempted to purchase, a handgun in the last 30 days, he said.

Marcus said he believes the confusion will dissipate "as time goes on and the word gets out. People will understand it."

Several gun dealers said the new law has also triggered a rise in the number of people who are acquiring concealed carry permits. Virginians with valid permits are exempt from the law and can purchase more than one handgun per month.

The overall number of denials for a variety of categories is up substantially this year as the volume of sales and the corresponding background checks have soared in Virginia, setting monthly records.

For example, in June, when the state police processed more than 81,000 firearm transactions amid concerns about COVID-19 and the economic turmoil it brought, along with racial justice protests, 864 people were denied the purchase of a firearm. That's up 244 percent from the 251 denials issued in June 2019.

In July, which saw 64,350 firearm transactions, purchase denials soared 622 percent - from 260 in July 2019 to 1,877 last month. That's largely due to denials for exceeding the one-handgun-per month restriction.

Virginia’s one-handgun-per-month law, which went into effect July 1, was by far the leading cause for people being denied the purchase of a firearm last month.