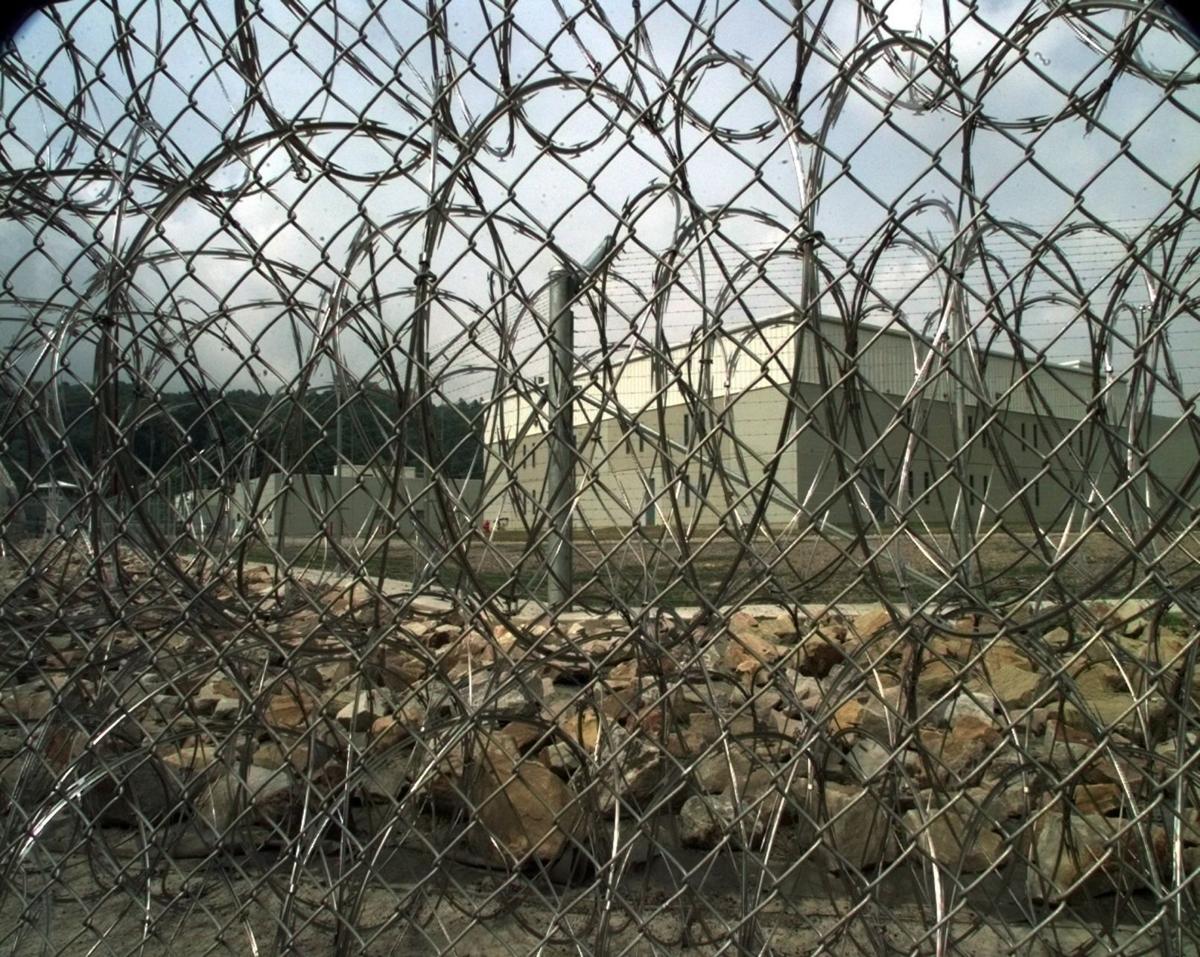 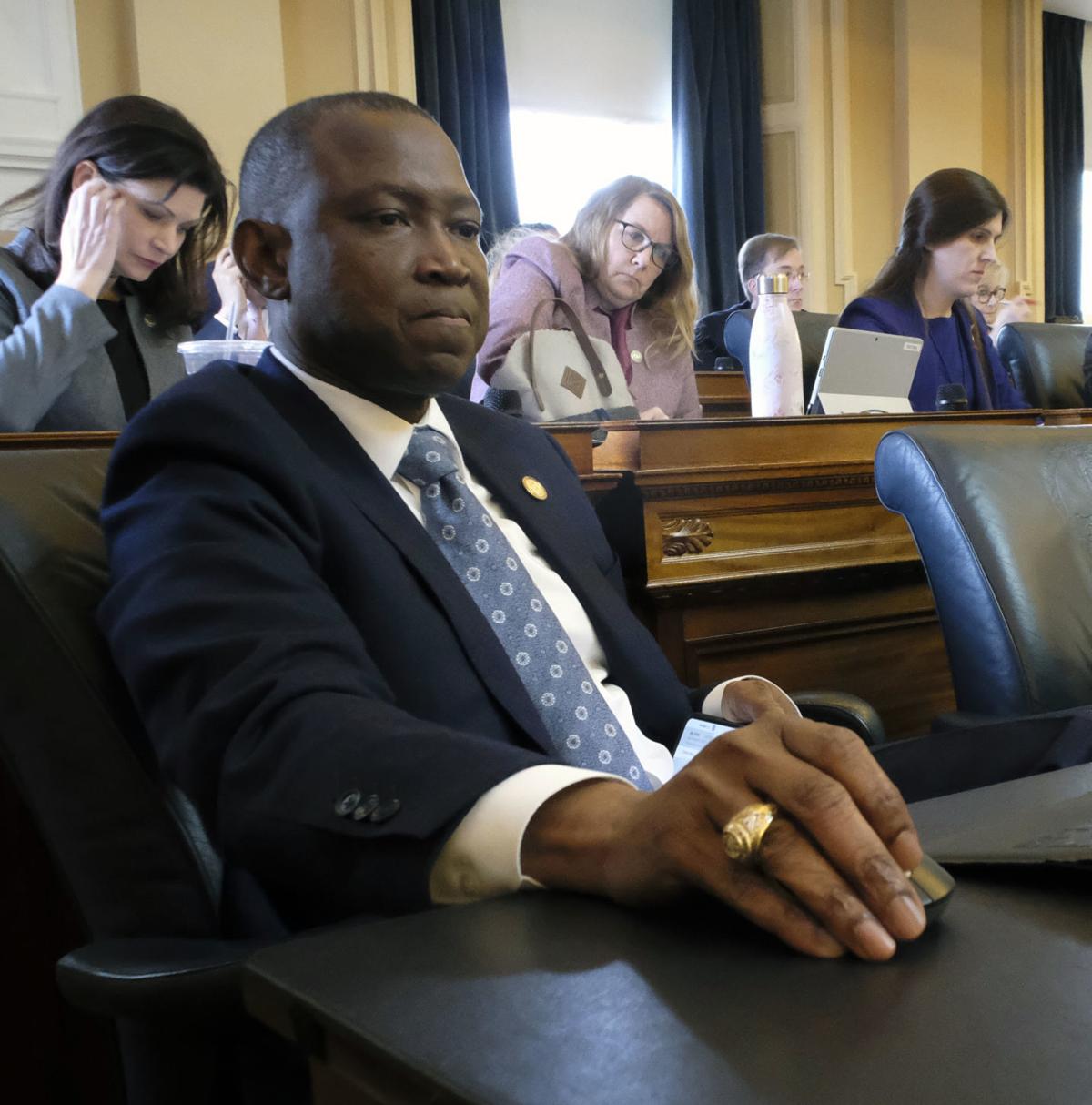 Del. Don Scott, Jr., D-Portsmouth, listens to debate as he sits at his desk in the House of Delegates inside the Capitol in Richmond in February.

By Amy Friedenberger The Roanoke Times

Jade Clark has been in and out of jail a few times for theft in the Roanoke and New River valleys, but this go-round has been the most challenging. So he’s determined to make this the last time he’s behind bars.

After being sentenced to several years in prison for shoplifting, Clark has participated in numerous classes intended to get him to change his behavior and improve as a person. He’s been reading self-help and financial literacy books. He’s figuring out how he can attend community college once he’s released.

“I have made all the changes within myself to be a better person and abstain from breaking the law upon my release,” Clark wrote in a message from the Western Virginia Regional Jail, where he’s currently being held. “I’m ready for my reintegration back into society.”

Clark estimates he’ll be released before a new law goes into effect next year that would expand the earned sentence credits program so people who are locked up can shave off some of their time if they participate in programs and maintain a clean disciplinary record. He said earned sentence credits are an important part of the correctional system if Virginia wants to incentivize people to improve themselves and return to society as better people.

“Earned sentence credits are so important because there are some bad people who are being warehoused in VA DOC prison systems,” Clark wrote. “But there are also a lot of really great guys who are right there in the mix who are doing everything they are supposed to be doing and have made the necessary changes to get out and be somebody.”

Gov. Ralph Northam recently signed the legislation into law, one of several championed by Democrats this year during a special session of the General Assembly that included an emphasis on criminal justice reform.

Experts say that earned sentence credit incentives combined with quality prison programming can help people adjust to life when they are released and help decrease recidivism. Earned sentence credit can also save money by cutting the costs associated with longer imprisonments and decrease the number of future crimes, studies show. The measure, advocates say, offers a limited form of relief and hope to people behind bars and signals that Virginia wants rehabilitation to begin once someone enters the prison system.

“These are people who have earned their way out after doing all the things we hope people will do if they are incarcerated, which is come back home and do the right thing and be productive members of our society,” said Del. Don Scott, D-Portsmouth, the patron of the House version of the bill.

The new law won’t go into effect until July 2022 in order to give the Department of Corrections time to upgrade its computer system.

Because the law requires the credits to be applied retroactively, more than 14,000 people will be eligible for immediate release next year, according to the Department of Corrections.

How many earned sentence credits people can receive depends on what tier the Department of Corrections assigns people to, and that is determined by their participation in programs and disciplinary record. Under the new legislation, the highest tier would allow someone to get 15 days off for every 30 days served. Currently, people can earn up to 4.5 days off for every 30 days served.

But there are a lot of exemptions built in to who can qualify for the tiers. Generally, people who are convicted of serious and violent offenses won’t be eligible for the expanded credits, but they can still receive the 4.5 days. It’s a lengthy list of offenses, including murder, rape, robbery, burglary, animal fighting, and displaying a swastika or noose on property to intimidate.

“All the people who are excluded, what is the message we’re sending to them?” said Nora Demleitner, professor at Washington and Lee School of Law who has studied this issue. “I worry to some extent about that group, because are we saying we don’t believe you can change and we don’t trust you?”

The legislation faced a lot of scrutiny from victims’ advocates and particularly sexual assault victims who pushed for the exemptions, saying they expect people to serve the time they are sentenced. Criminal justice reform groups and families of people who are incarcerated advocated that there should be no carve-outs, saying everyone should get an equal shot at earning the time to return home earlier after improving themselves.

Scott said he recognized that including the exemptions would be the only way to get the legislation to the governor’s desk. He said he also wanted to be sensitive to victims and families of victims, which includes his House colleagues who have had loved ones be the victims of violent crimes.

“I try not to be so harsh on people who don’t feel the way I do about this,” said Scott, a criminal defense attorney. “I try to convince with evidence and data. Going forward, I hope we can have more reconciliation.”

Some Democrats opposed the bill, while all of the Republicans voted against it. Republicans said the policy would erode Virginia’s truth-in-sentencing initiative put into place more than two decades ago intended to impose stiffer sentences on violent offenders and mandate people serve at least 85% of their sentences.

Virginia abolished parole in 1995 at the height of the nation’s response to crime and drug waves that crested in the early 1990s, a response that critics today contend was racially discriminatory and punitive. U.S. Attorney General Bill Barr, then the co-chair of former Gov. George Allen’s Commission on Parole Abolition and Sentencing Reform, helped craft other major changes that came to be known as “truth in sentencing.” The idea was that people would largely serve the sentences judges and juries handed down.

“You want truth in sentencing that’s good for the entire system,” Del. Les Adams, R-Pittsylvania, said when the bill was presented in the House. “It’s good for victims, most importantly, so they know when a sentence is imposed, a majority of that is going to be served.”

Chief Deputy David Bell with the Roanoke Sheriff’s Office said he likes earned sentence credit because people behave better in jail when they know the Department of Corrections will review their file to determine their classification upon arriving to prison, establishing how much earned sentenced credit time they will receive.

“We find that inmates do behave better with incentivized programs,” Bell said.

The Department of Corrections will put together a group to study the effects of the changes to the earned sentence credits program, including the fiscal impact, costs saved by reducing the length of time people serve, and how many people were affected by the change to the program. That report will be due to the governor and General Assembly by June 2023.

Demleitner said it would also be wise for the state to keep an eye on how judges react to the changes. They may increase sentences to adjust to the possibility that people going to prison could reduce their time through earned sentence credits.

She said there is currently a national study happening that looks into each state’s early release systems. Demleitner said that while Virginia’s enhanced earned time credits marks progress, the resulting legislation was quite restrictive because of the expansive categories of exclusions.

“We are still a very conservative state with respect to criminal justice reform,” she said. “I know we think we’ve done this incredible heavy lifting in prison reform, but we have very limited release provisions.”

Scott is hoping that as time passes and people’s attitudes change about the criminal justice system, the legislature can chip away at the exclusions to make more people eligible for earned sentenced credits.

“I don’t just think about the people who are incarcerated, but the communities overall and the victims, because they’ll be safer,” Scott said. “These people were coming home anyway, and we want to incentivize those people who we know are already coming home to prepare themselves in the best way possible for when they are released.”

The two were found in North Carolina after an Amber Alert was issued for her disappearance.

They apparently had been dead for several days.

Federal prosecutors are asking a judge to revoke Thomas Robertson's bond, citing his online statements and possession of guns and an explosive device.

Del. Don Scott, Jr., D-Portsmouth, listens to debate as he sits at his desk in the House of Delegates inside the Capitol in Richmond in February.