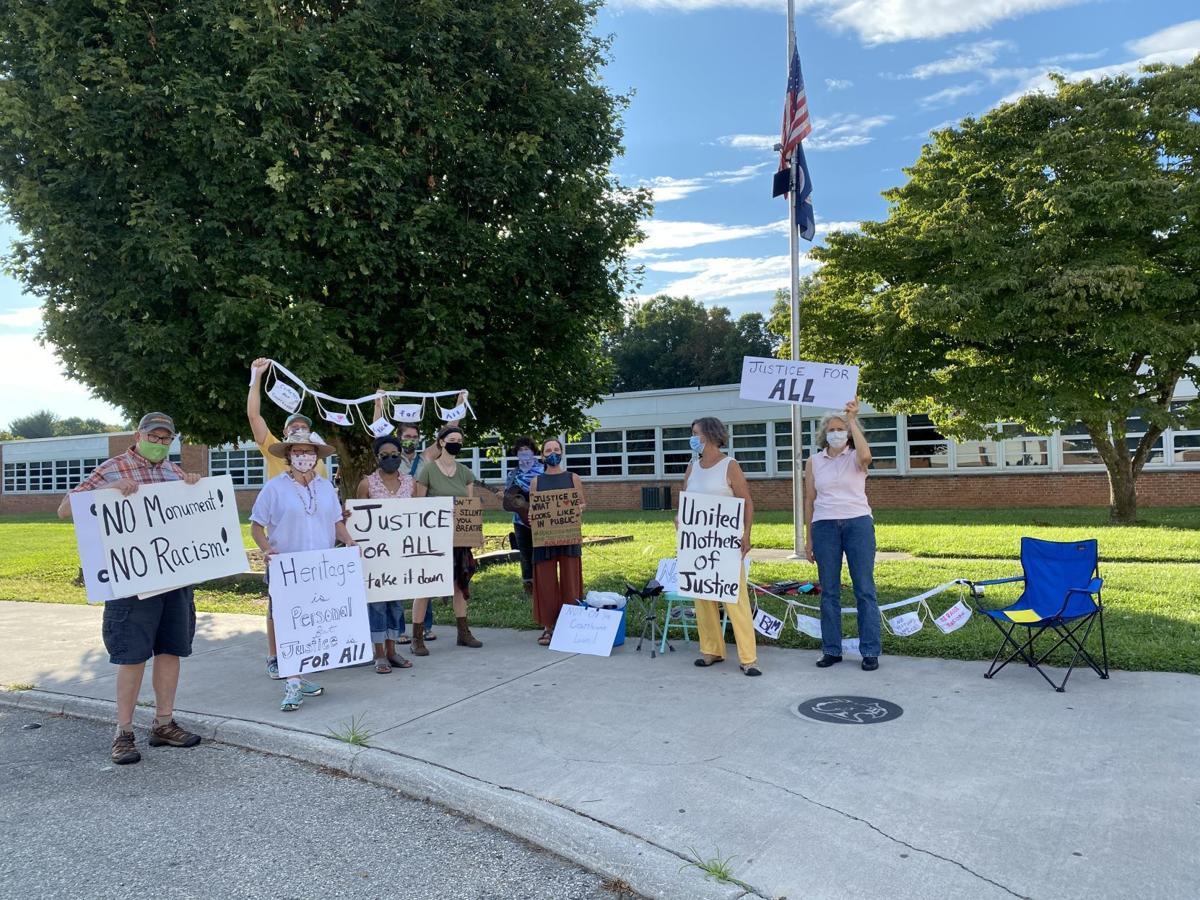 Several members of Floyd CARE (Community Action for Racial Equity), along with local musician Jake Retting, demonstrated in the high school parking lot prior to Tuesday's meeting. Retting said he was recruited by local attorney and activist Alan Graf, who wanted a "socially-conscious" performer to join the demonstration. 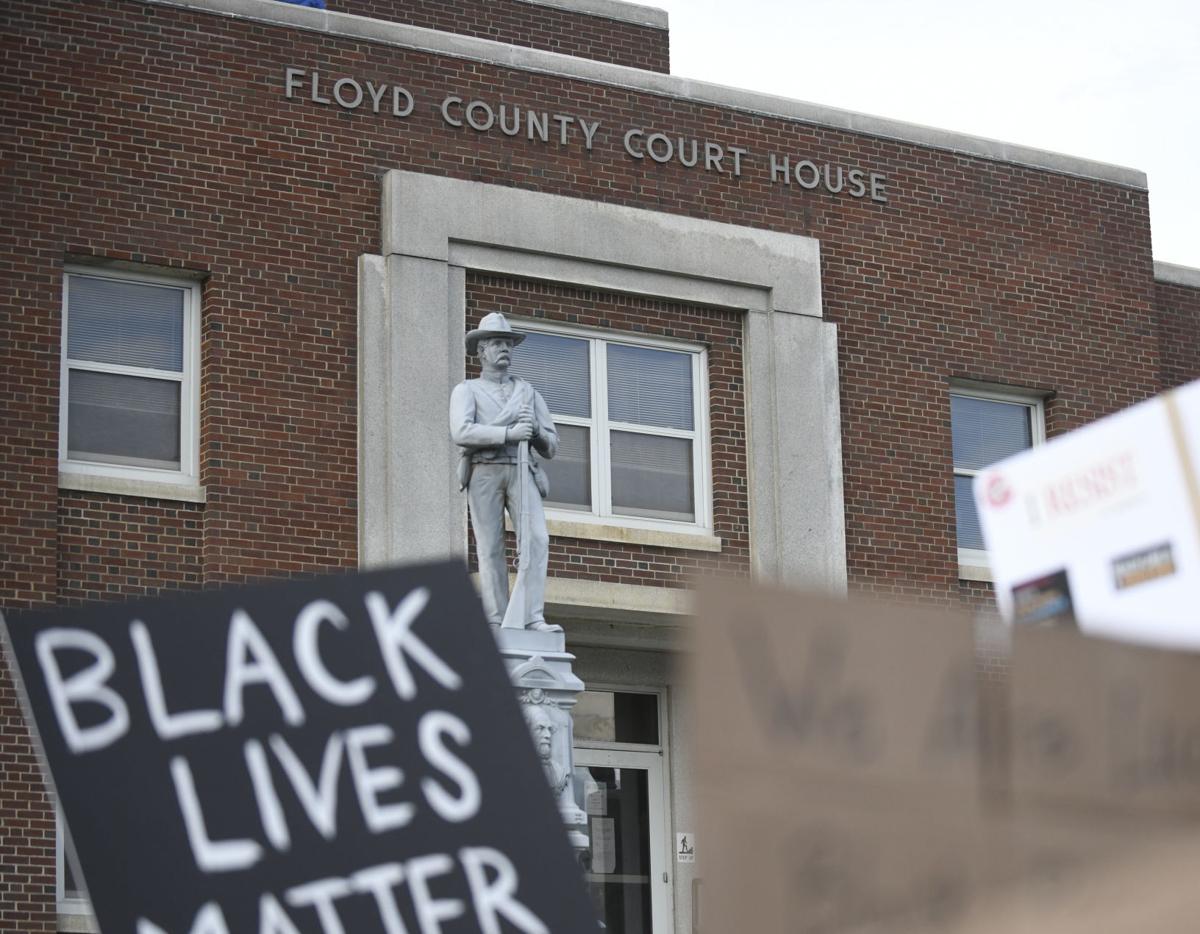 The Floyd County Board of Supervisors is considering putting the removal of the Confederate statue in front of the county courthouse to a November referendum.

FLOYD — Whether voters will decide the fate of Floyd County's courthouse Confederate monument remains in question.

After another meeting and more remarks by residents,  the county Board of Supervisors took no action Tuesday night. The board has another meeting scheduled for Aug. 11. That's three days before the deadline to put the matter on the November ballot.

After facing criticism following a meeting earlier this month, held at the County Administrative Building and with limited in-person attendance capacity, the board announced it would move Tuesday's meeting to the Floyd County High School auditorium in order to allow for more people to attend and offer public comments.

About 25 people filed into the auditorium prior to the meeting’s 7 p.m. start, with approximately half wearing masks or making obvious efforts to socially distance. All five supervisors, for the first time since the pandemic began, wore face masks throughout the meeting.

About two dozen people spoke on whether to remove the Confederate monument on the courthouse lawn. The board also has the authority to act unilaterally on the issue, and to make a decision about the fate of the monument by a majority vote among the five supervisors.

The first five speakers joined the meeting via phone, which the board is allowing during this state of emergency precipitated by the coronavirus pandemic. The first seven speakers all favored removing the monument or relocating it to a more appropriate place, before the meeting shifted to a long string of people who spoke in favor of preserving the monument.

Those speaking in favor of moving the monument described a new era in Floyd County where diversity is honored and Black residents can feel welcome – they say this type of environment is precluded by keeping the monument in front of the courthouse. Most favored unilateral action by the board to remove the monument, arguing that supervisors were elected to be moral leaders, not defer to popular opinion by way of a referendum.

Those advocating keeping the monument in place spoke of their heritage in Floyd County and many who had ancestors that served in the Confederacy. Others worried that removing the monument was akin to erasing history. Several made baseless claims connecting the Black Lives Matter organization to communist and Marxist causes.

Bob Smith, the chairman of the Floyd County Electoral Board, attended the meeting. Two weeks ago, the Electoral Board wrote a letter to the supervisors discouraging them from placing the question of whether to remove the monument on November’s ballot, citing concerns about voter intimidation.

Smith thanked the Supervisors for their offer of additional resources to make the election safe, and then, on his own behalf, advocated the opposite position of the letter he co-signed. He supported the referendum, saying the county deserved a “numerical, empirical reflection of views.”

Jeff Dowd, who organized the citizen militia that demonstrated at a county park last winter, was the only person who spoke during public comment on a topic other than the Confederate monument. He offered the Supervisors an ordinance, which he said was written in consultation with Commonwealth’s Attorney Eric Branscom, to officially recognize the militia. Many members of the audience at Tuesday’s meeting were sporting “Floyd Militia” hats.

The Virginia Department of Behavioral Health and Developmental Services report outbreaks of coronavirus at the state's psychiatric hospitals as they are tasked with caring for more patients than maximum capacity.

A Mississippi man visiting Smith Mountain Lake died after wakeboarding Saturday afternoon. The investigation is ongoing and awaiting a report from the medical examiner.

The son and attorney of a resident of Blue Ridge Therapy Connection and staff members say an outbreak of scabies -- a precursor to the COVID-19 outbreak that has hit more than a quarter of the residents -- was not made public.

Virginia has avoided the possibility of 800,000 more COVID-19 cases since it started its phased reopening in May, according to researchers from the University of Virginia who are urging residents to stay vigilant amid surges across the state.

Republican legislators want to add limits to the governor's emergency powers while enhancing those of the Virginia General Assembly.

A Chesterfield County teen was sentenced Tuesday to serve 35 years in prison for a crime of “extreme brutality” that claimed the life of a respected historic preservationist.

Harper, a longtime Amtrak station agent, was at home at the Hill City's Kemper Street Station. Enthralled by rail since childhood, he found endless joy watching trains pass by for a living.

But after a nearly half-century career assisting passengers, Harper is retiring from the business he loves.

VMI will not remove Confederate statues or rename buildings

Several members of Floyd CARE (Community Action for Racial Equity), along with local musician Jake Retting, demonstrated in the high school parking lot prior to Tuesday's meeting. Retting said he was recruited by local attorney and activist Alan Graf, who wanted a "socially-conscious" performer to join the demonstration.

The Floyd County Board of Supervisors is considering putting the removal of the Confederate statue in front of the county courthouse to a November referendum.