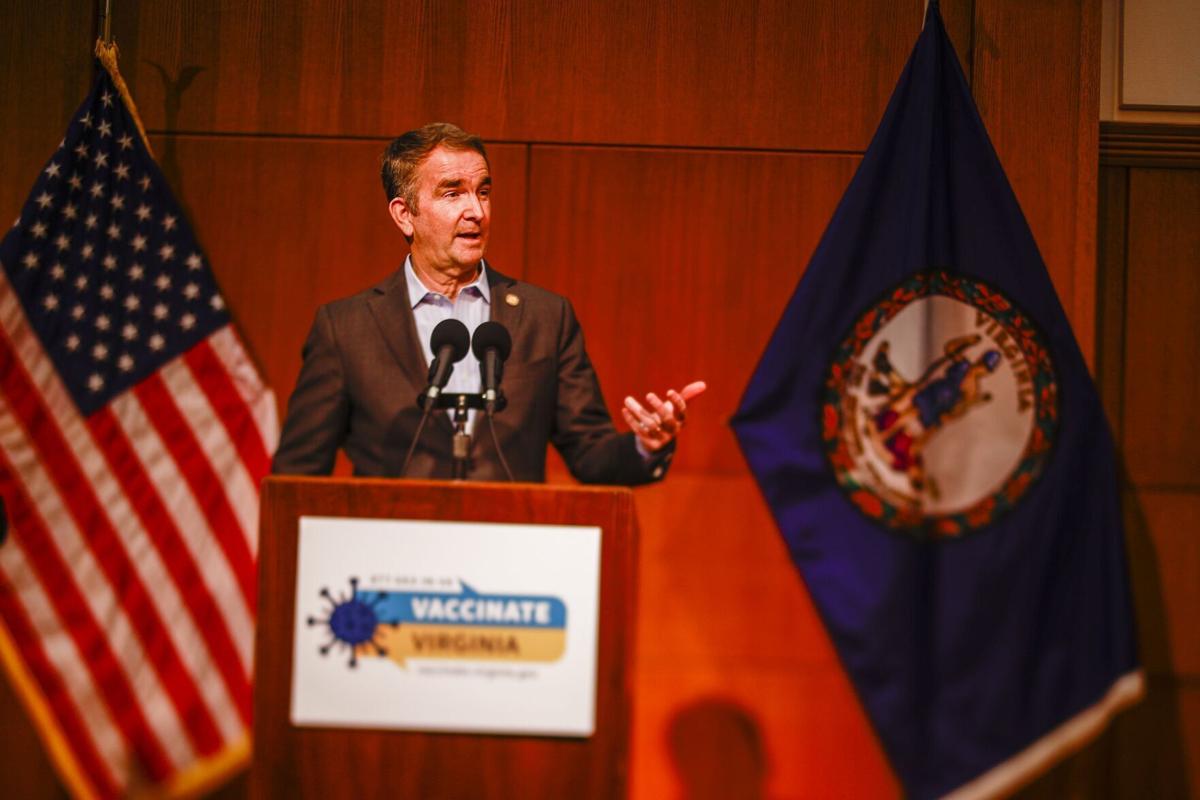 Gov. Ralph Northam speaks Monday at a COVID-19 briefing in Richmond. He said his new order is meant to give health systems more flexibility amid the COVID-19 surge. 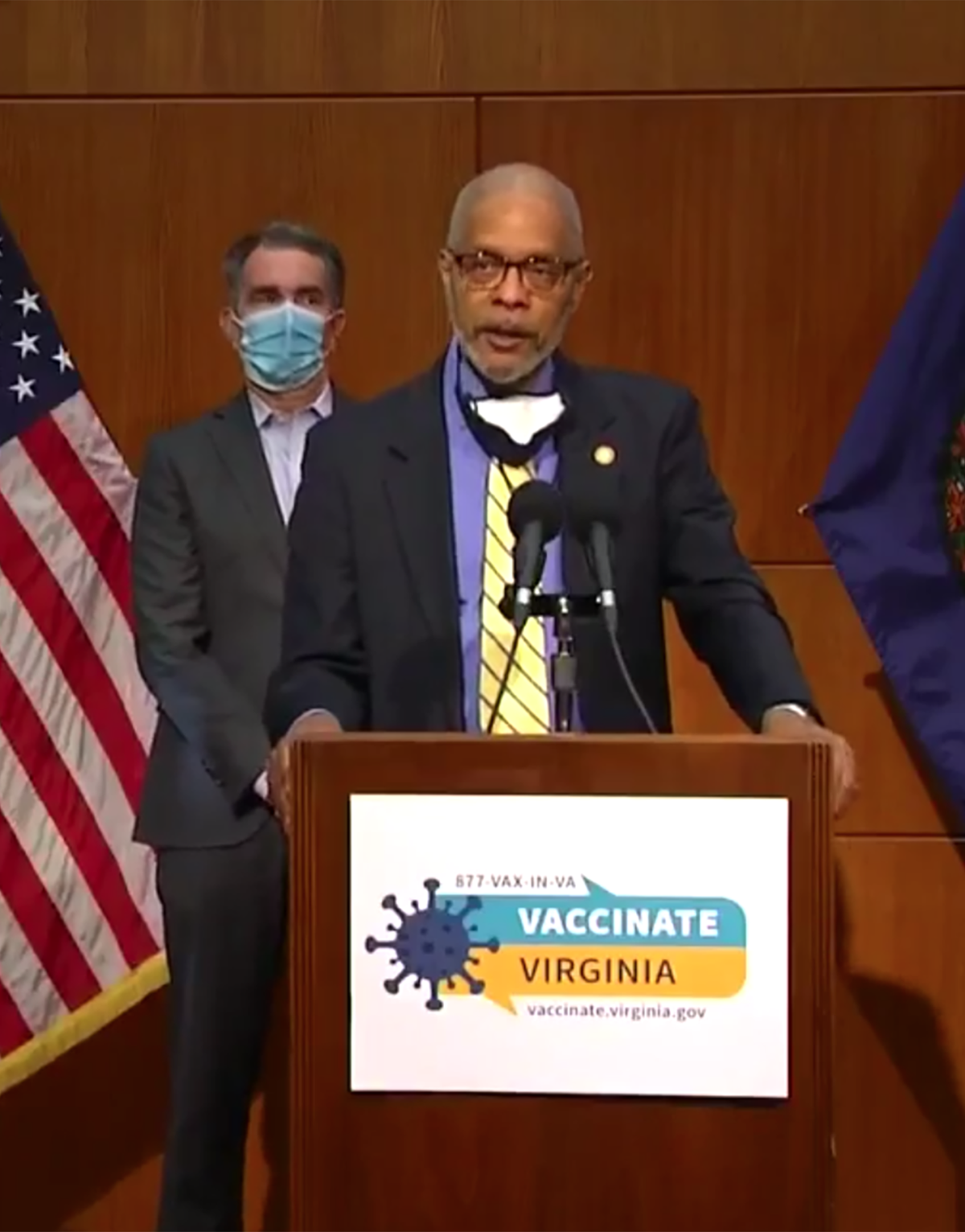 Gov. Ralph Northam on Monday issued an emergency order giving Virginia’s health care system more flexibility to care for more patients amid a surge in COVID-19 cases that has strained the state’s hospitals.

More than 3,500 people are hospitalized with COVID-19, breaking the state’s record set last January. Nearly 600 people are being treated in intensive care units, about the same number as the peaks the state saw last winter and summer.

During a news conference — his first on COVID-19 since the recent surge started — Northam sought to temper public alarm. The governor, who leaves office with Glenn Youngkin’s inauguration on Saturday, argued that although cases are rising, 68% of people in the state are vaccinated, blunting the likelihood of severe illness.

“We have to acknowledge that while the omicron variant seems to cause less serious symptoms, especially in the unvaccinated, it’s also highly contagious. That means that even though the symptoms are less severe, if more people get sick, more people are going to need to go to the hospital. And that is what we’re now seeing around the country and especially right here in Virginia,” Northam said.

Northam is also trying to address the state’s shortage of health care workers. The order will allow workers with out-of-state licenses to practice in Virginia; increases the ratio of workers to patients; and gives health care workers extra liability protections.

The shortage of health care workers to administer tests, Northam said, is in partly to blame for the lack of COVID-19 tests in the state, particularly the most reliable tests known as PCRs.

The Northam administration announced last week that it was launching nine new COVID-19 testing centers in the “coming weeks,” though even before Christmas, many people had reported troubles finding COVID-19 tests.

Asked why the state was taking so long to expand testing capacity, Northam said the state had an ample supply of tests, but not enough bodies to administer them.

“It’s the staffing,” he said. “When there’s so many people sick, whether it be the individuals or their family members, they can’t show up to staff these testing and vaccine centers.”

Northam’s emergency order will also try to expand the number of people who can administer the COVID-19 vaccine. It will allow any licensed health professional who has administered the vaccine in a hospital setting, or any licensed practical nurse, to give the shot.

The emergency order, which went into effect Monday, is slated to remain in place for 30 days.

On Tuesday, Northam said his administration had communicated with the Youngkin transition about the emergency order. Northam stopped short of saying Youngkin had endorsed it, but said the two leaders had been working amicably and were working toward continuity.

Northam said Virginia’s gubernatorial transition was nothing like the hand-off between former President Donald Trump and President Joe Biden.

“This transition has been much more efficient,” he said. “There’s been a lot better communication and that’s the way it should be.”

"During the campaign, it was made clear that now Attorney General-elect Miyares and Attorney General Herring have very different visions for the office," said Miyares spokeswoman Victoria LaCivita by email. "We are restructuring the office, as every incoming AG has done in the past."

A photo of her sitting behind Youngkin on Monday, shooting burning eyes at the new governor, has already been turned into a meme.

NEWPORT NEWS — A former Virginia couple has pleaded guilty to submitting at least 40 fake loan applications totaling more than $5.1 million connected to the COVID-19 pandemic, according to the U.S. Department of Justice.

According to a search warrant, Giles County Historical Society directors became aware that money was missing, then learned that a debit card was being used to withdraw funds.

Youngkin sworn in as Virginia's 74th governor, pledging to 'restore power to the people'

Glenn Youngkin was sworn in on Saturday as Virginia’s 74th governor, saying he was elected to “restore trust in government, and to restore power to the people,” a mission he promised to deliver on during his inaugural address.

Gov.-elect Glenn Youngkin's pick for secretary of transportation says the department is "laser focused" on preparation for this weekend's snow, coming days after the overnight standstill on Interstate 95.

Renée Thompson Truehart often posts pictures, videos and memes on TikTok, Facebook and Instagram. So when she came across a toddler wandering in the middle of a dark street in Highland Springs in freezing temperatures, she started recording video from her phone even before she stopped her car to help the child.

Gov. Ralph Northam speaks Monday at a COVID-19 briefing in Richmond. He said his new order is meant to give health systems more flexibility amid the COVID-19 surge.