Updated: 'It’s not the void they hoped it would be': An 1890 time capsule under Lee statue to be removed - once crew members find it
0 Comments
Share this
{{featured_button_text}}
1 of 3 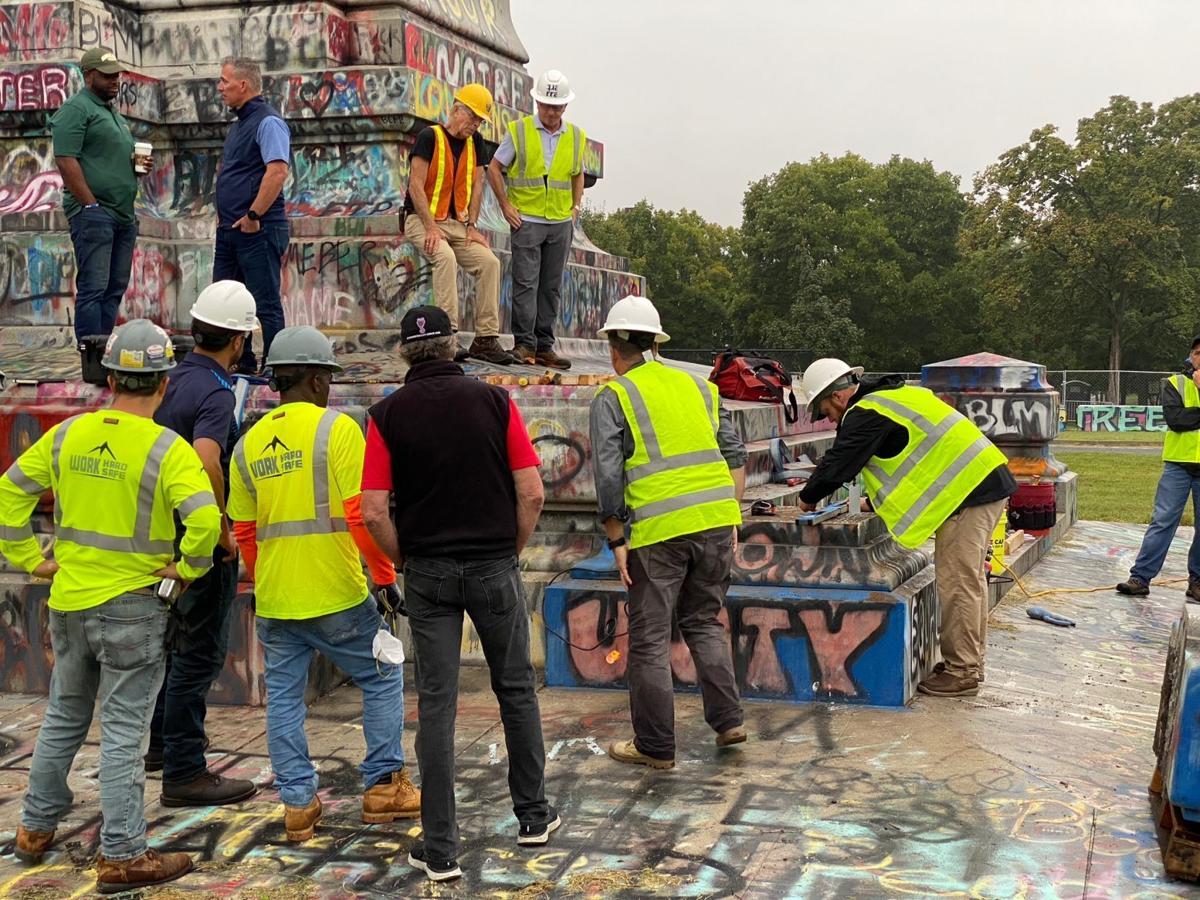 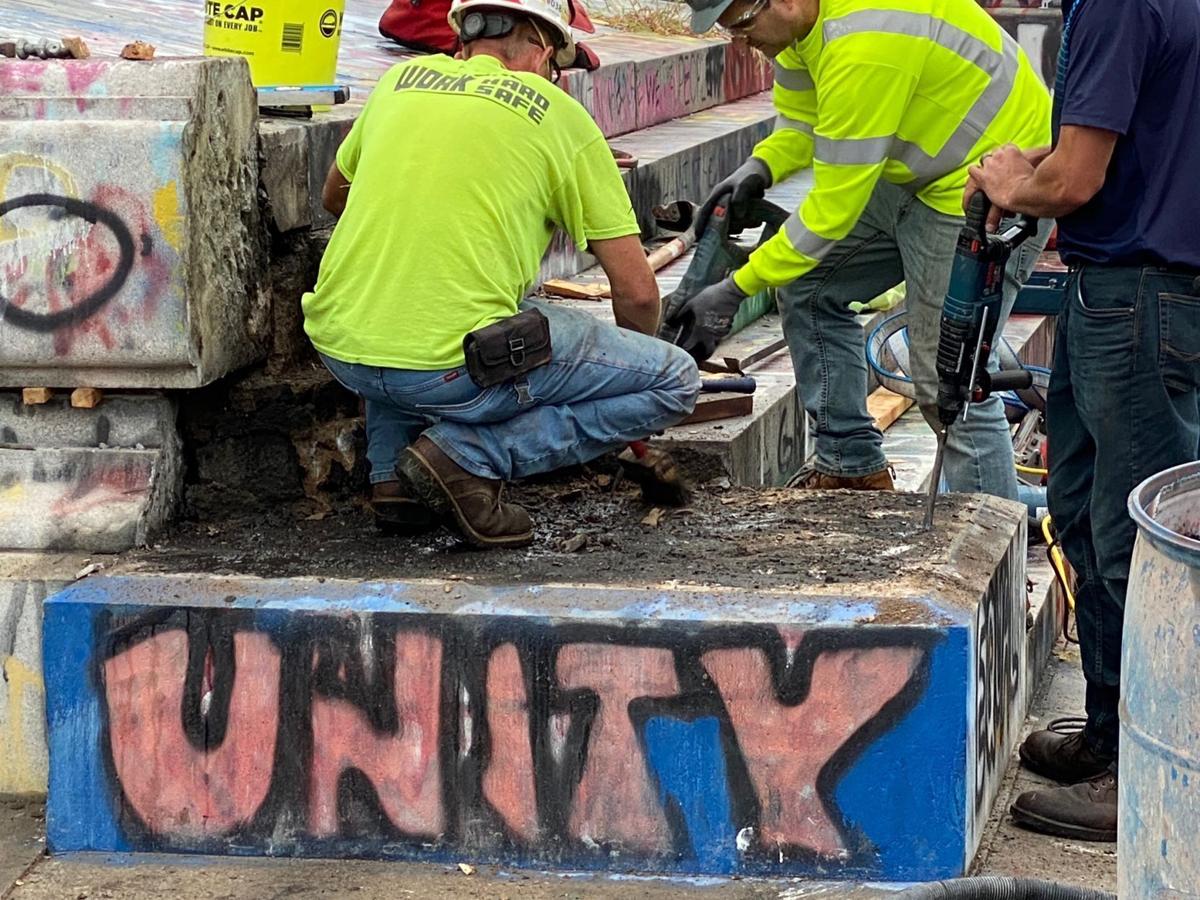 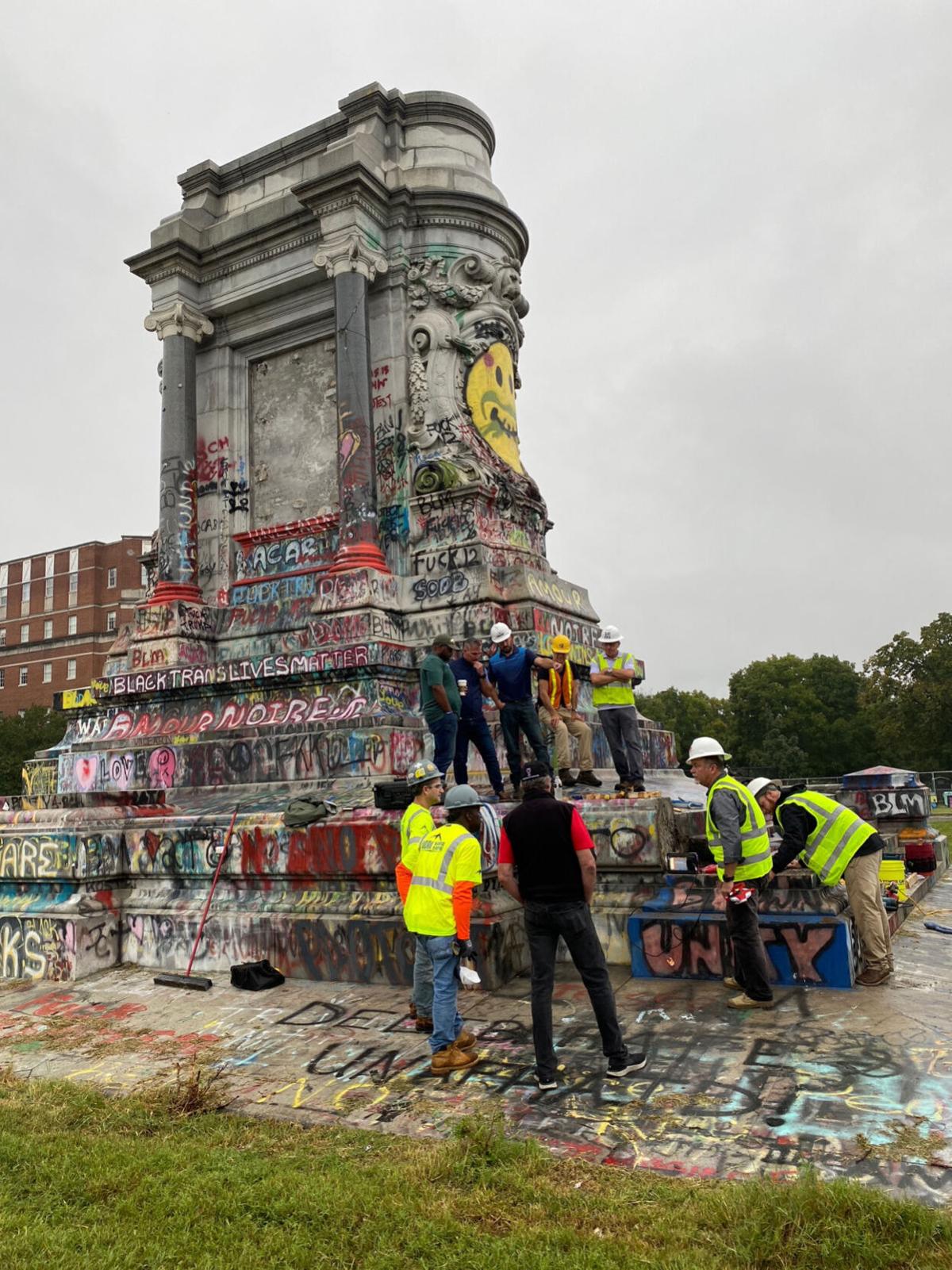 Five hours after it began work Thursday morning, a masonry crew had still not found a time capsule believed to exist under the Robert E. Lee statue’s pedestal.

The workers are continuing to examine the stones’ contents and are preparing to place a new time capsule in the north east corner of the 40-foot pedestal. The statue of Lee, which was unveiled in 1890 and sat on top of the pedestal, was removed Wednesday morning.

There is scant evidence suggesting workers placed a time capsule under the pedestal in 1887, but there’s no guarantee it’s there. The only evidence of its existence is a newspaper article and an X-ray revealing a void in the stone. But the statue’s blueprints don’t show it.

The 1887 article, published in The Richmond Dispatch - a predecessor of this publication - stated that the old time capsule contained 60 objects largely related to the Confederacy. The list of contents includes a picture of Abraham Lincoln lying in his coffin, a collection of Confederate buttons, a guide to Richmond with a map of the city, three bullets, a piece of shell and a Minie ball lodged in a piece of wood from a Fredericksburg battle field.

Workers reached the void Thursday morning, but apparently the capsule is not in that particular void, said Clark Mercer, Gov. Ralph Northam’s chief of staff.

“It’s not the void they hoped it would be,” Mercer said.

The void apparently was used to help place the stone in 1887, which was the first piece of the stone work on the monument. The rest of the pedestal was constructed around it.

There’s still a chance the capsule is lower in the stone or underground, said Dale Brumfield, an author and historian who has studied the capsule’s history.

Workers have already moved 3,000 pounds of stone, cutting two blocks from the base’s corner and picking them up with a forklift. The words “Black and brown unity” had been spray painted where the granite stones were cut.

A Connecticut-based company, Summit Masonry & Building Restoration, is working to excavate the capsule. Summit also removed the other Confederate statues along Monument Avenue.

If the time capsule is discovered, it will be taken to the Virginia Department of Historic Resources for opening. But Brumfield estimates there’s a 90% chance its contents have been ruined by water seeping into the box.

One worker used a saw to cut a hole into one of the blocks for the placement of the new time capsule, whose contents were recently announced by Northam’s office.

Richmond sculptor Paul DiPasquale designed a 12 by 6 by 6 stainless steel box to house the artifacts. The box was sealed with silicone and pumped with argon to prevent water and air damage. The new time capsule will go where the old one is believed to exist, and there are no plans to identify it with a sign.

If the pedestal is eventually removed and a new statue or work of art is placed in the circle, the capsule will be buried underground at that location, said Tori Noles Feyrer, a member of the governor’s staff.

The state has tasked the Virginia Museum of Fine Arts and the city of Richmond to reimagine Monument Avenue and a concept is due Sept. 1, 2022. The state won’t remove the pedestal until after the VMFA has completed its project.

First Lady Pamela Northam and Meryem Karad, a member of the governor’s staff, carried the box to the circle Thursday morning. A 16-member committee that chose its contents wanted to display images of COVID, the Black Lives Matter protests and equity and inclusivity.

They chose prayer beads from a person who died of COVID, an expired vial of Pfizer vaccine, a steel railroad spike found in Richmond’s African Ancestral Burial Ground, a photo of a Black ballerina standing under the Lee statue and the Richmond Times-Dispatch’s Michael Paul Williams’ signed collection of Pulitzer Prize-winning columns on dismantling the legacy of the Confederacy in its former capital.

“How do you capture a moment in time?” Northam said. “Today we leave a small message of hope for future generations.”

Kimberly Wilson, the great, great niece of newspaper editor John Mitchell Jr., attended Thursday’s event. Mitchell, who was born enslaved and became editor of the Richmond Planet, wrote that Black workers constructed the Lee statue, and if it were ever taken down, they should be there to take it down.

“I think he got it right,” Wilson said Thursday. “He tried to sound that alarm.”

Wilson, 57, grew up in Richmond, and as a kid, she didn’t understand the significance of the Confederate statues, though her parents tried to explain it. As she got older, the statues bothered her more and more. She called Thursday’s events a “next step forward.”

The state hasn’t decided when it will remove the black perimeter fence it installed in January, Mercer said. It did plan to remove Thursday the outer fence that was erected recently to keep observers at a distance as the statue was disassembled.

There’s now a safety concern for visitors to the circle, because workers removed four steps from the northern end of the pedestal, and it’s unclear when they will be replaced.

Watch Now: Biden wants to raise taxes on the wealthy

Watch Now: How much will space travel cost?

Watch Now: How much will space travel cost?

Leader of massive robocall scam with 4,000 victims in the U.S. gets 22-year prison term

Among the victims of the India-based scam, which raked in more than $10 million, was an elderly Virginia woman who lost $445,000.

Marijuana in Virginia: Medical flower or 'bud' and pre-rolls now available in Richmond

The first gubernatorial debate between Democrat Terry McAuliffe and Republican Glenn Youngkin on Thursday was a combative standoff over political differences as much as personal jabs.

Marijuana in Virginia: Medical flower or 'bud' and pre-rolls now available for the first time

The Virginia Employment Commission has “paused” its collection of overpayments to unemployed Virginians as the beleaguered agency struggles to address rising backlogs of disputed claims and appeals that continue to strain the state unemployment system 18 months after the COVID-19 pandemic began.

A 32-year-old man and his dog both ended up dead following a medical emergency Saturday morning in the Widewater area, police.

A Spotsylvania man who fired three shots during a traffic altercation earlier this year on State Route 3 in the county was ordered Tuesday to serve five years in prison.

Dominion Energy earned more than $1.1 billion above a fair profit from its Virginia customers in four years, according to State Corporation Commission staff testimony filed in an ongoing review of the monopoly utility’s books.