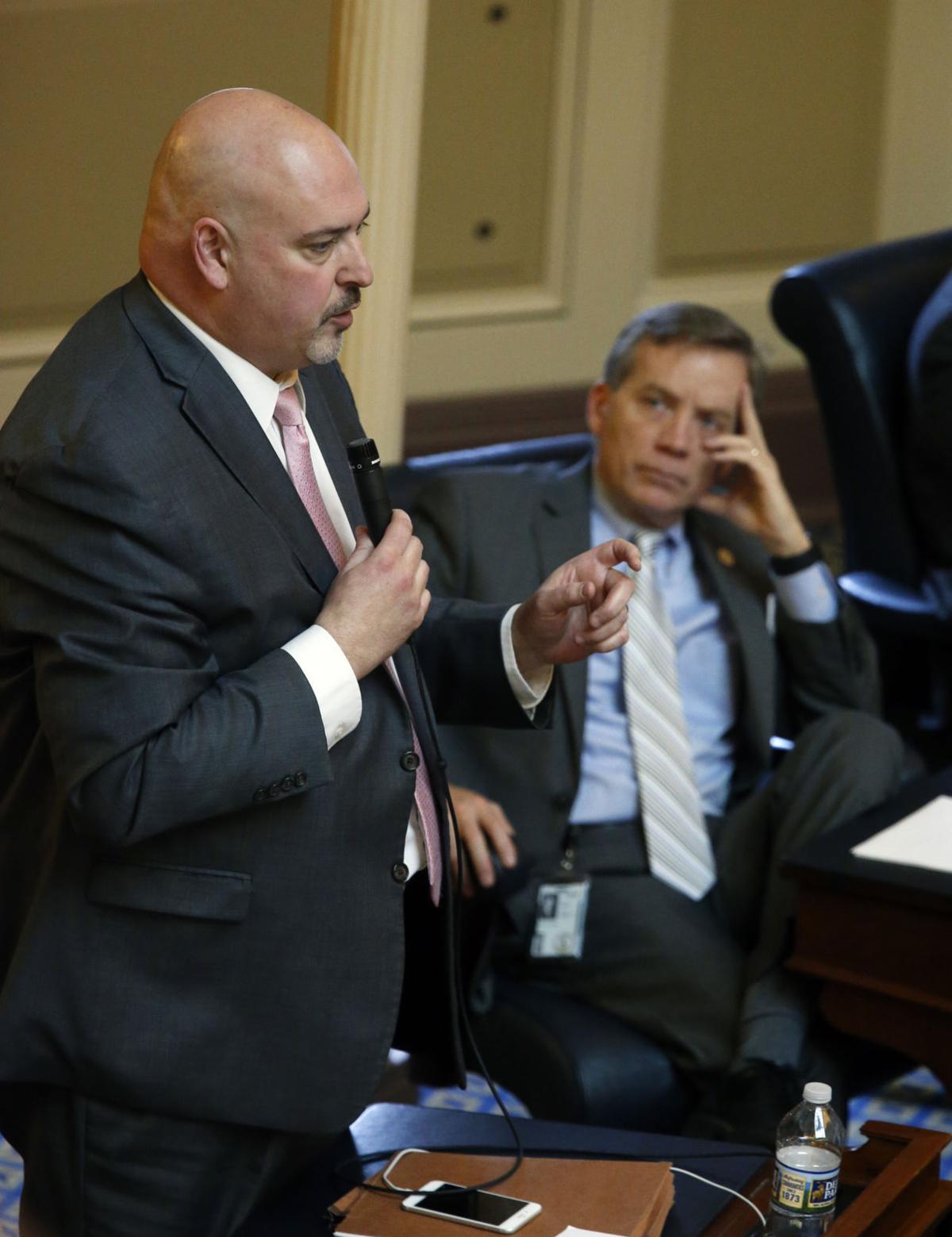 House Majority Leader Todd Gilbert, R-Shenandoah (left) speaks and Del. Chris Jones, R-Suffolk (right) listens during the floor session of the House of Delegates inside the state Capitol in Richmond on Feb. 21. 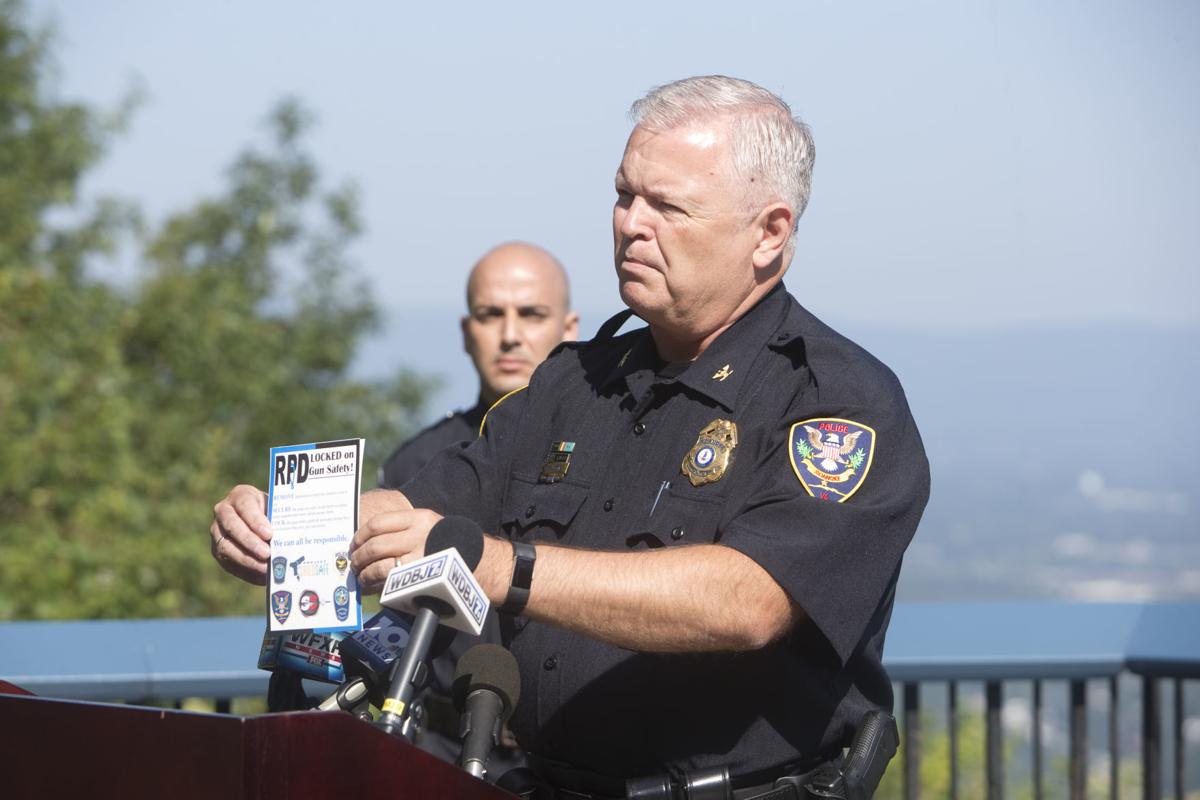 Roanoke Police Chief Tim Jones said only a handful of people are responsible for shootings in the city. 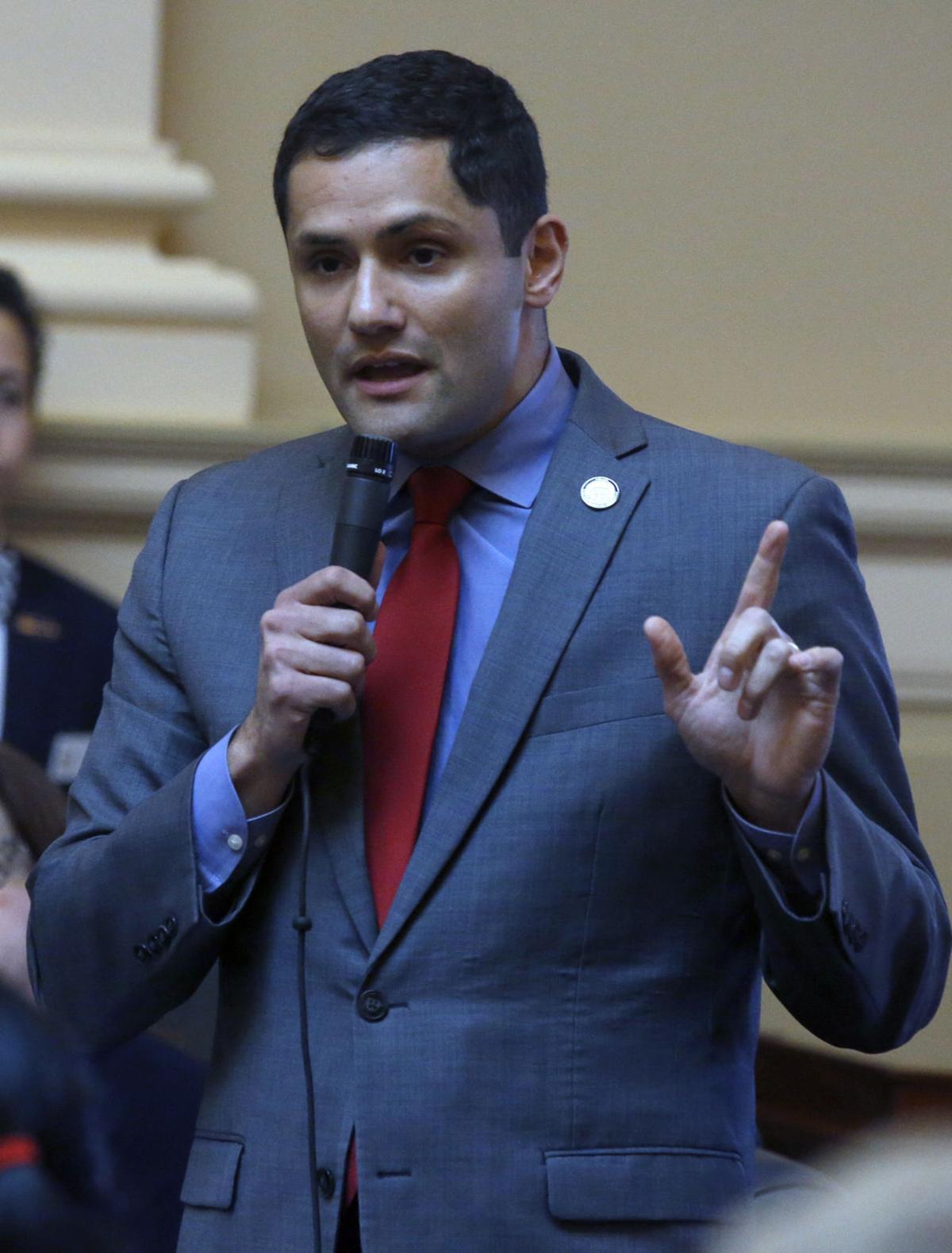 Most of those deaths received little attention from politicians. There were no special panels or special legislative sessions to discuss causes and solutions to the unremitting cases of gun homicides, which often take place in urban areas and claim a disproportionate number of black lives.

Mass shootings — although they represent a small percentage of gun murders — often steer the debate on gun violence and inspire policy proposals such as bans on military-style assault weapons. Politicians don’t often talk about one of the more promising strategies aimed at significantly reducing urban gun violence. But Republican Del. Todd Gilbert, a former prosecutor from Shenandoah County with a tough-on-crime point of view, wants to try it out in Virginia.

“These mass shooting incidents are horrifying, but they don’t represent the bulk of gun-related violence in our country,” said Gilbert, the majority leader in the House of Delegates. “Far too often it’s communities of color and communities that are impoverished where the bulk of this violence occurs. I feel like we need to stop forgetting about that and forgetting about those victims and try to find a way to get people to make better decisions about their life and the lives of others.”

Gilbert has proposed a way to take an organized approach to introducing programs inspired by Operation Ceasefire, an anti-violence initiative launched in Boston two decades ago. It’s a strategy police and community leaders use to identify those most at risk of shooting someone or being shot, convey why the violence needs to stop, offer support, and promise swift and tough crackdowns on the groups that continue shooting.

The U.S. Department of Justice has labeled it as effective in reducing gun violence and gives it its highest rating. Studies consistently rate the method as effective.

Gilbert introduced the legislation as part of Gov. Ralph Northam’s call for lawmakers to address gun violence following the mass shooting at Virginia Beach. The governor, a Democrat, called a special session of the General Assembly in July to take up measures on the issue. The Republican-controlled legislature adjourned after just 90 minutes and scheduled to reconvene after the November election. It handed the legislation over to the Virginia State Crime Commission, which will meet Aug. 19 to review proposals, including Gilbert’s idea.

Gilbert is proposing the creation of the Group Violence Intervention Board. Its job would be to secure federal grants and work with law enforcement agencies to establish a program similar to Ceasefire. It would deliver a report each year to the General Assembly.

The legislation says the programs should be “substantially similar to Operation Ceasefire” as implemented in Boston.

After Boston launched Ceasefire in 1996, gun homicides and shots fired calls sharply declined, according to research. However, the program collapsed a few years later because of leadership changes and disputes among those involved.

Other programs have fallen apart across the country over the years because groups failed to follow tenets or due to a lack of funding. But research shows that several cities saw reductions in violence after the community and police rigorously implemented Ceasefire and similar strategies.

In areas experiencing gun violence , it’s mostly concentrated among a small number of people. Roanoke Police Chief Tim Jones said a handful of people are responsible for the city’s shootings. And police know who they are.

Jones characterized many of the shootings as a result of “ongoing beefs” that can seem trivial.

“We’ll follow up with folks after a shooting, and it’ll be over a boyfriend or girlfriend, or some debt that is owed, or sometimes it’s been as simple as someone bumping into someone on the dance floor,” Jones said.

Black people have made up half of gun homicide deaths in Roanoke over the past five years, according to police data maintained by The Roanoke Times, despite making up 28% of the city’s population.

To go along with Ceasefire, Gilbert wants to create “Project Exit.” This program would allocate grant money to localities and nonprofits to offer services like job training, educational opportunities and housing assistance to those who lay down their guns.

Gilbert said he hasn’t received any feedback from Democrats about his proposal. He said he sent his bill to some members of the Virginia Legislative Black Caucus, but none of them replied.

Del. Lamont Bagby, D-Richmond, the chairman of the black caucus, did not respond to a request for comment.

“There’s nothing partisan about this idea,” Gilbert said. “This is something that demonstrably saves lives and changes people’s lives, and I would hope that’s why we all got into government in the first place.”

Gilbert said it’s important to have bipartisan support for his proposal, especially from the mostly Democrats who represent urban areas.

“Frankly, without those urban legislators who can hold people’s feet to the fire in areas they represent, it’s much less likely to be effective,” Gilbert said. “We need buy-in from everybody to make sure it works.”

Del. Sam Rasoul, D-Roanoke, pointed to Gilbert’s words in a recent op-ed in which he described Ceasefire as “law enforcement comes into the neighborhood and uses any and all legal ‘levers’ to send a message.”

“This is not the evidence-based system that treats violence as a health crisis,” said Rasoul, a member of the black caucus.

A few years ago, Rasoul worked with a handful of community activists to try to import another strategy — called Cure Violence — to deal with the gun violence in the city. It would have called for “interrupters” — typically former perpetrators of gun violence — to intervene to prevent retaliatory violence. Police play less of a role in this program. Studies on several cities that have tried this strategy found that it lowered some types of crimes in some places, but the results weren’t significant enough to label the strategy as effective. In Roanoke, the program never got off the ground due to a lack of collective will.

There are other policies that could curb urban gun violence. For example, Northam wants background checks for all firearm sales.

Researchers mostly agree an improved background check system would reduce urban gun violence and mass shootings, although hard evidence of their effectiveness is limited. Background checks need to be properly implemented and enforced, says Cassandra Crifasi, a researcher at the Johns Hopkins Center for Gun Policy and Research. She said other gun laws can’t be enforced without a proper background check system.

“Background checks on their own aren’t effective enough,” said Crifasi, a gun owner.

She suggested a licensing system, which requires people to obtain a permit, typically through a police department, before they can purchase a gun from a licensed or private seller.

In 2018, 84% of Virginia voters said they favor requiring background checks for all gun sales, according to a poll from the Wason Center for Public Policy at Christopher Newport University. Still, the issue remains politically divisive among lawmakers.

Gilbert’s idea is unlikely to lead to a fight with pro-gun groups. It just requires some money and political support, he says.

“I’m sure if we can provide additional resources and a new framework for how to deal with that violence, we can really save lives and improve people’s lives,” Gilbert said.

The crime commission will meet Aug. 19 and 20 to review legislation introduced during the special session. Both meetings will happen at the House Committee Room on the ground floor of the Pocahontas Building at 900 East Main St. in Richmond.

Aug. 19 from 10 a.m. to 5:15 p.m.: Crime commission members will be provided presentations by federal and state agencies and other organizations.

Aug. 20 from noon to 8 p.m.: The commission will hear additional presentations and public comment and patron presentations.

To speak on Aug. 20, you will have to sign up outside the meeting room between 9 and 11 a.m. Sign up is first come, first serve. Only those issued a number will be able to speak during public comment. Comments are limited to two minutes.

If you are unable to attend, the commission will receive written comments. You can email them to comments@vscc.virginia.gov or mail them to:

RICHMOND — For more than a decade Lori Haas, whose daughter survived after being shot during the 2007 shootings at Virginia Tech, has been advocating for universal background checks.

RICHMOND — Twelve years ago, Andrew Goddard, whose son Colin survived four bullet wounds at the 2007 Virginia Tech shootings, sat in a room at the Capitol in Richmond and watched state lawmakers reject a measure that would have expanded background checks for firearm sales.

The Virginia State Crime Commission will meet this week to review dozens of proposals aimed at reducing gun violence, but it won’t deliver a report to the General Assembly until after the election.

RICHMOND — For more than a decade Lori Haas, whose daughter survived after being shot during the 2007 shootings at Virginia Tech, has been advocating for universal background checks.

Ending without a bang: crime commission's report on gun violence gives no recommendations

After months of studying the causes of gun violence, the Virginia State Crime Commission issued a report with no recommendations on how to curb the deadly toll in Virginia.

U.S. Sen. Tim Kaine pushed back against Republicans in the Virginia General Assembly who say their plan to have the state crime commission review gun control legislation is similar to what he did as governor following the 2007 Virginia Tech shootings.

General Assembly adjourns with no action on gun bills, election 4 months away

House Majority Leader Todd Gilbert, R-Shenandoah (left) speaks and Del. Chris Jones, R-Suffolk (right) listens during the floor session of the House of Delegates inside the state Capitol in Richmond on Feb. 21.

Roanoke Police Chief Tim Jones said only a handful of people are responsible for shootings in the city.