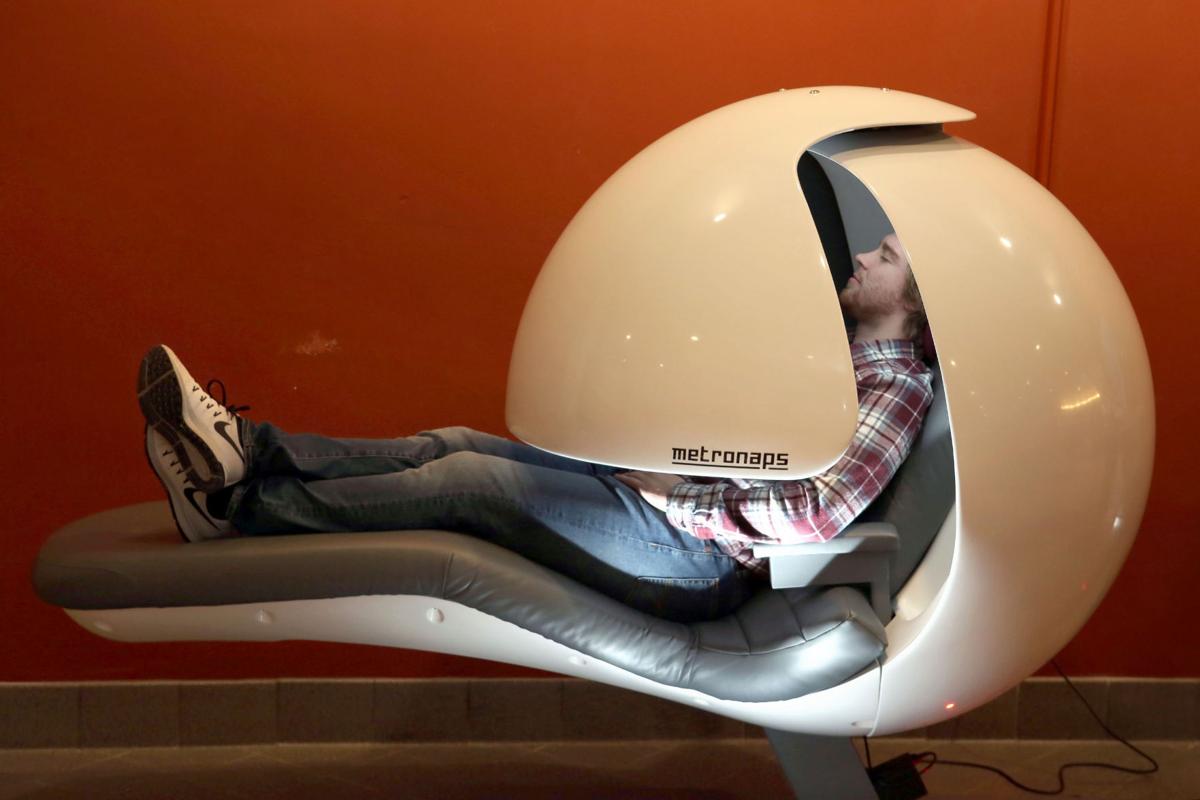 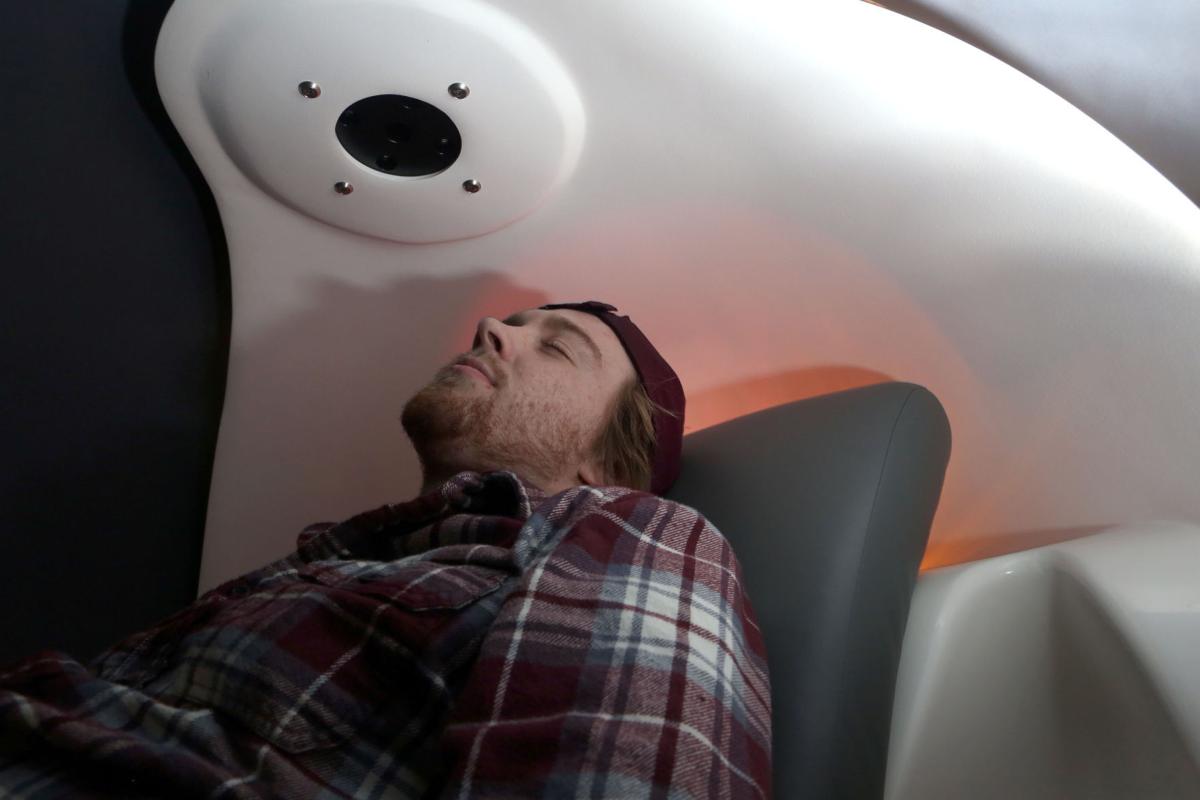 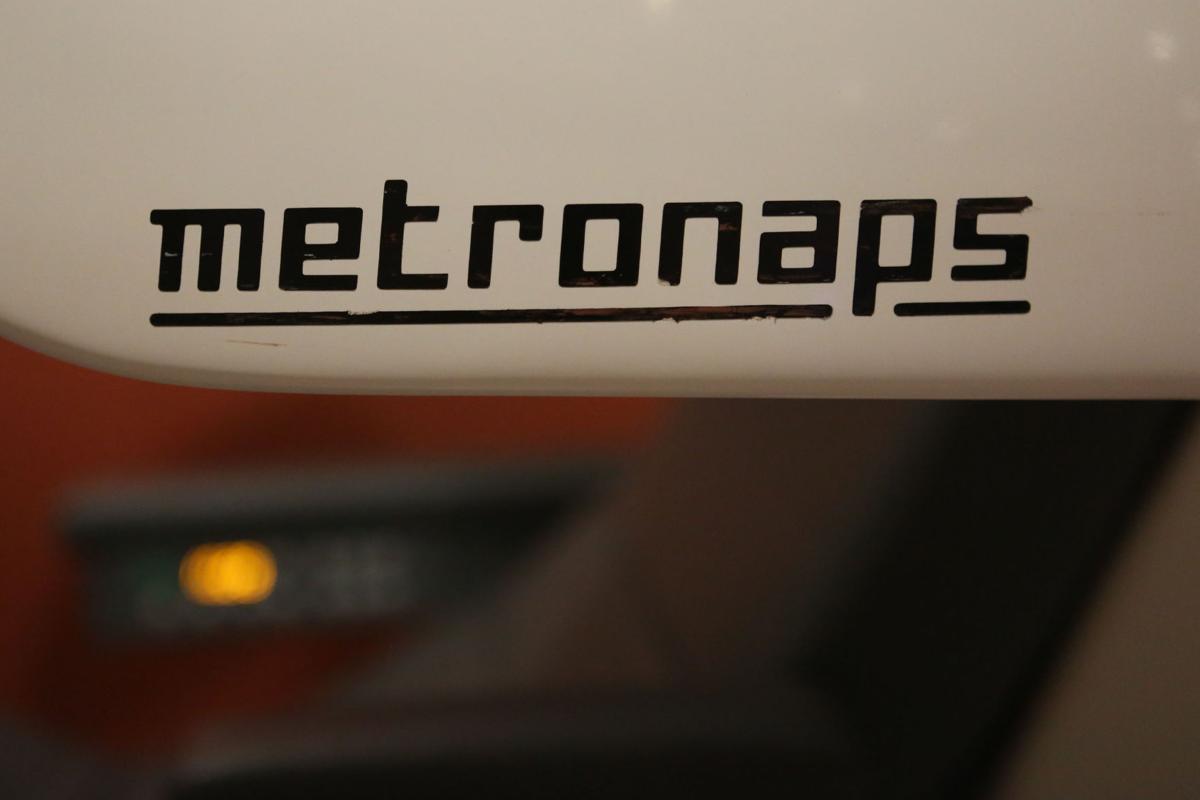 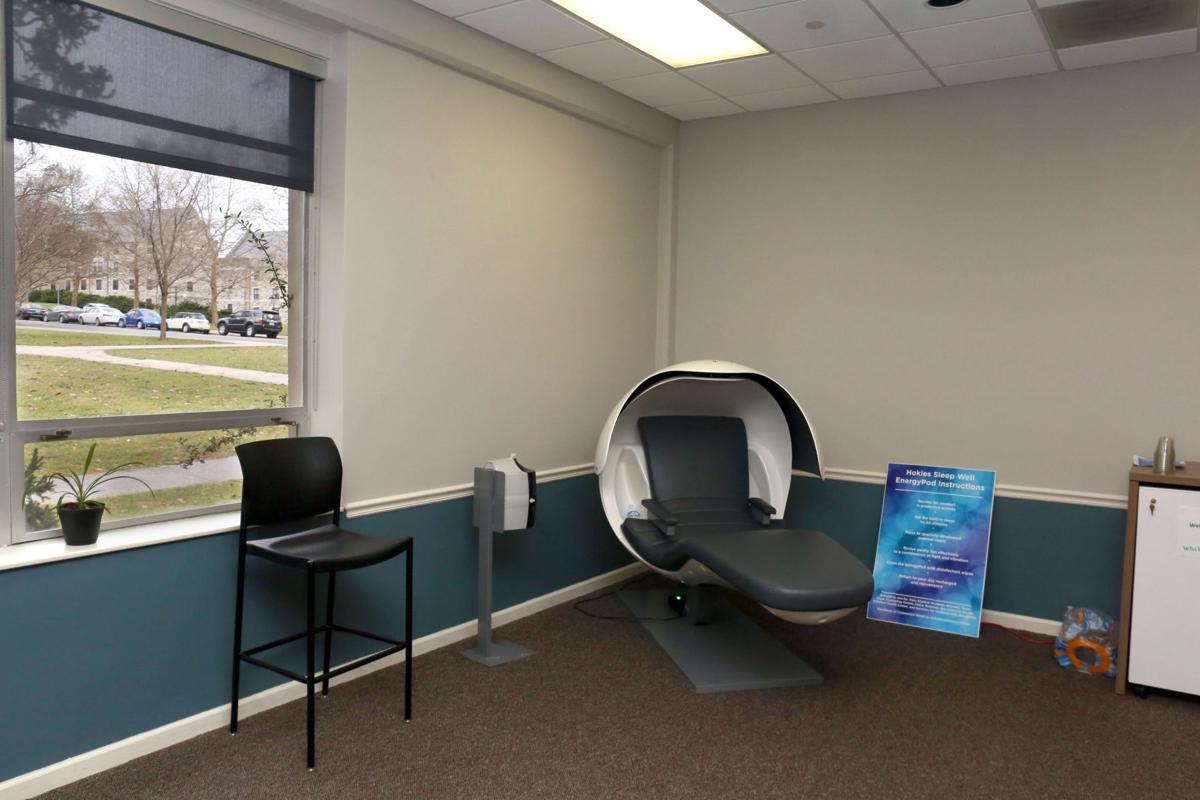 Earlier this year, three futuristic nap pods, like this one located in the Wellness Room of Virginia Tech’s Graduate Life Center, were installed on the campus. Looking a bit like space capsules the domed recliners offer students and staff a private, comfortable place to catch some z’s. 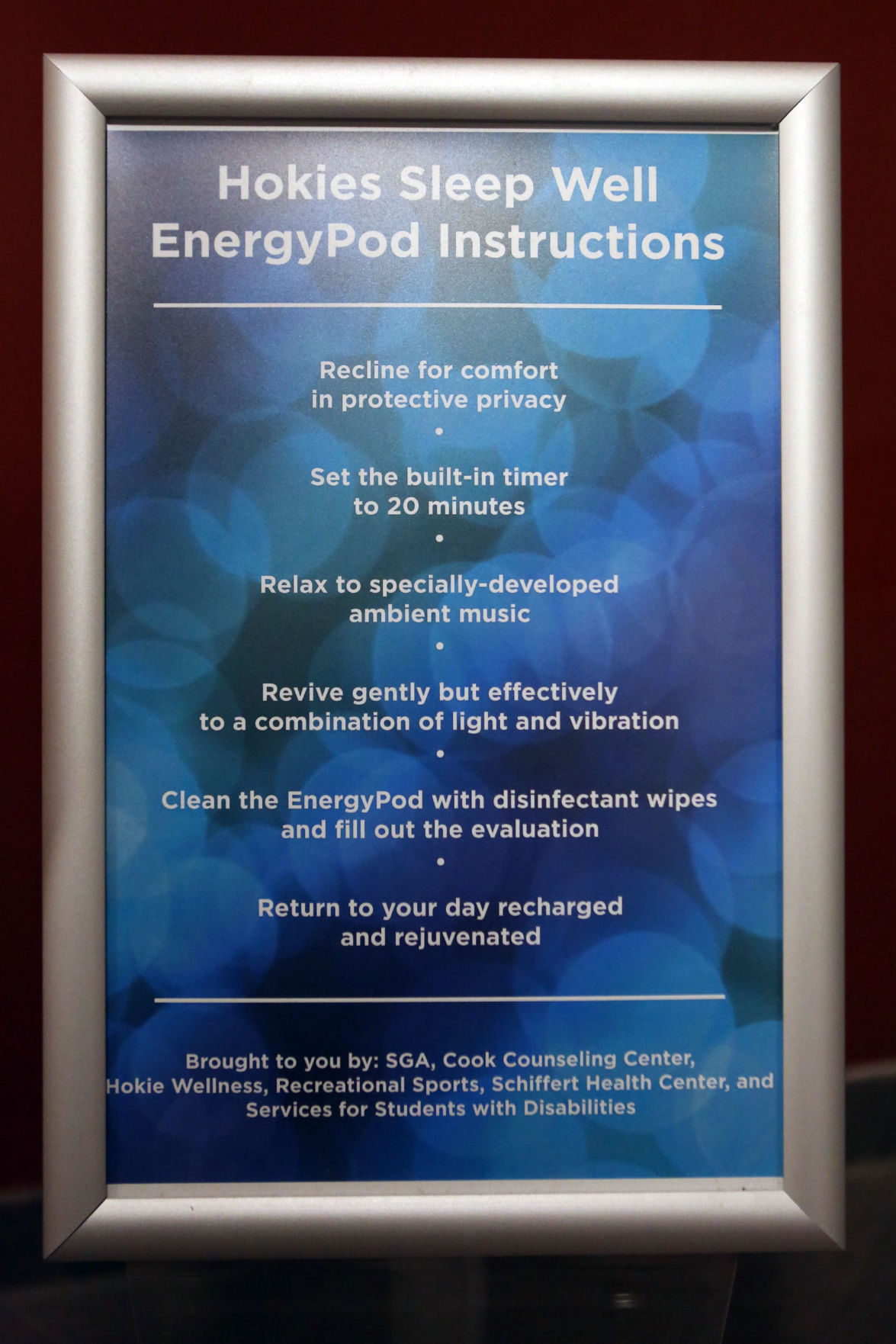 By Su Clauson-Wicker / For The Roanoke Times

BLACKSBURG, Va. — Naps are no longer just for the pre-K set. Performance-boosting siestas in specially designed “sleep pods” are being promoted at Google, NASA, and the Cleveland Indians.

And now at Virginia Tech.

Earlier this year, three futuristic nap pods were installed on the Virginia Tech campus. Looking a bit like space capsules, these domed recliners offer students and staff a private, comfortable place to catch some z’s. Soft music blocks out campus noise and light vibrations help the user to relax.

The futon-sized pods are growing in popularity as a response to studies that reveal the harms of being sleep-deprived. Sleep pods are popping up at numerous companies, where they are touted for ramping up productivity. Schools hope to enhance student brain power and focus by facilitating catnaps on campus.

The average college student sleeps about six hours a night –120 minutes less than what is recommended, according to a University of Georgia survey. People who don’t get enough sleep are likely to be cranky and depressed; they’re also prone to getting sick more often. They aren’t performing at their best and are shortchanging their learning ability by missing out on the REM sleep that allows their brains to process the information they’ve taken in during the day.

“Sleep is now recognized as an important component of wellness, right up there with eating right, exercise and avoiding unhealthy habits,” Kropff said. “People shouldn’t be bragging about how little sleep they’re getting by on but how well they’re taking care of themselves by getting enough sleep.”

Kropff and the student wellness group organized a sleep awareness week to emphasize the need for sleep. Hokie Wellness also offered a workshop on good sleep techniques. But the students still felt something was missing – a good place to sleep during the day.

Chris Wise, assistant vice president for student affairs, examined and tried out several models of sleep pods at a student services expo. He was impressed.

“It was comfortable, semi-private, and maybe a good way to take a nap that might just appeal to our students, as opposed to sleeping in uncomfortable positions on sofas or chairs around campus,” Wise said.

Wise expects that the presence of these conspicuously modern devices on campus will signal the crucial role that adequate sleep plays in learning.

“Our goal is to not only provide an opportunity for naps on campus, but more importantly, to use the pods as reminders of the importance of quality sleep for college students, and really all people,” he said, “as well as the relation of quality sleep to academic success and improved mental and physical health.”

By the end of April, Virginia Tech was testing an EnergyPod, the signature product of the MetroNaps company. The pod was placed in a high traffic area of Squires Student Center, Tech’s activity hub. During the hectic final weeks of classes and exam week, students tried out the sleep pod and gave feedback.

“Their response was overwhelming. They really liked it,” Kropff said. “So in the summer we bought two more with end-of-fiscal-year savings.”

EnergyPods aren’t cheap; they range from just over $8,000 to $13,000, according to the MetroNaps’ news release. Virginia Tech purchased their sleep pods at the low end of that range, about $8,400, Wise said. He thinks of them as highly visible reminders of the importance of sleep, as well as sites where students and staff can recharge.

The sleep pods are tucked into corners just off the main flow at Newman Library, Squires Student Center, and in the Wellness Room of Tech’s Graduate Life Center. As soon as you position the rotating hood – it looks like a huge bike helmet – you’re enclosed in a comfortable, shady bubble of silence or tranquil music. Occasionally you hear the whoosh of ocean waves. You snooze in anonymity with only your legs visible. The pods are preset for 20 minutes. When it’s time to awaken, soft lights begin to flicker, the pod vibrates, and the background music becomes gradually louder.

Junior computer science major Taylor Thackaberry said her 20 minutes in the Squires EnergyPod was enjoyable but found she couldn’t nap. “Maybe the waves were a little too loud; maybe I don’t think sleep when I hear waves,” she said. “But it was relaxing.”

Not everyone falls asleep in the pod, but according to surveys, only 2 or 3 out of 200 said they did not benefit from the respite from everyday stimuli, Wise said. The overwhelming majority felt their EnergyPod session was relaxing. In New Mexico, some health officials give testimony to the pods’ ability to relieve stressed students’ headaches and anxiety.

Kropff says she’s glad to offer tired students an alternative to sleeping on the floor. “I’ve seen students sleeping in all kinds of places, but especially on the floor. The pods are much more comfortable and hygienic. We have wipes beside the devices so users can sanitize them after use, just like exercise equipment. I’m so glad they have another sleep option.”

Earlier this year, three futuristic nap pods, like this one located in the Wellness Room of Virginia Tech’s Graduate Life Center, were installed on the campus. Looking a bit like space capsules the domed recliners offer students and staff a private, comfortable place to catch some z’s.