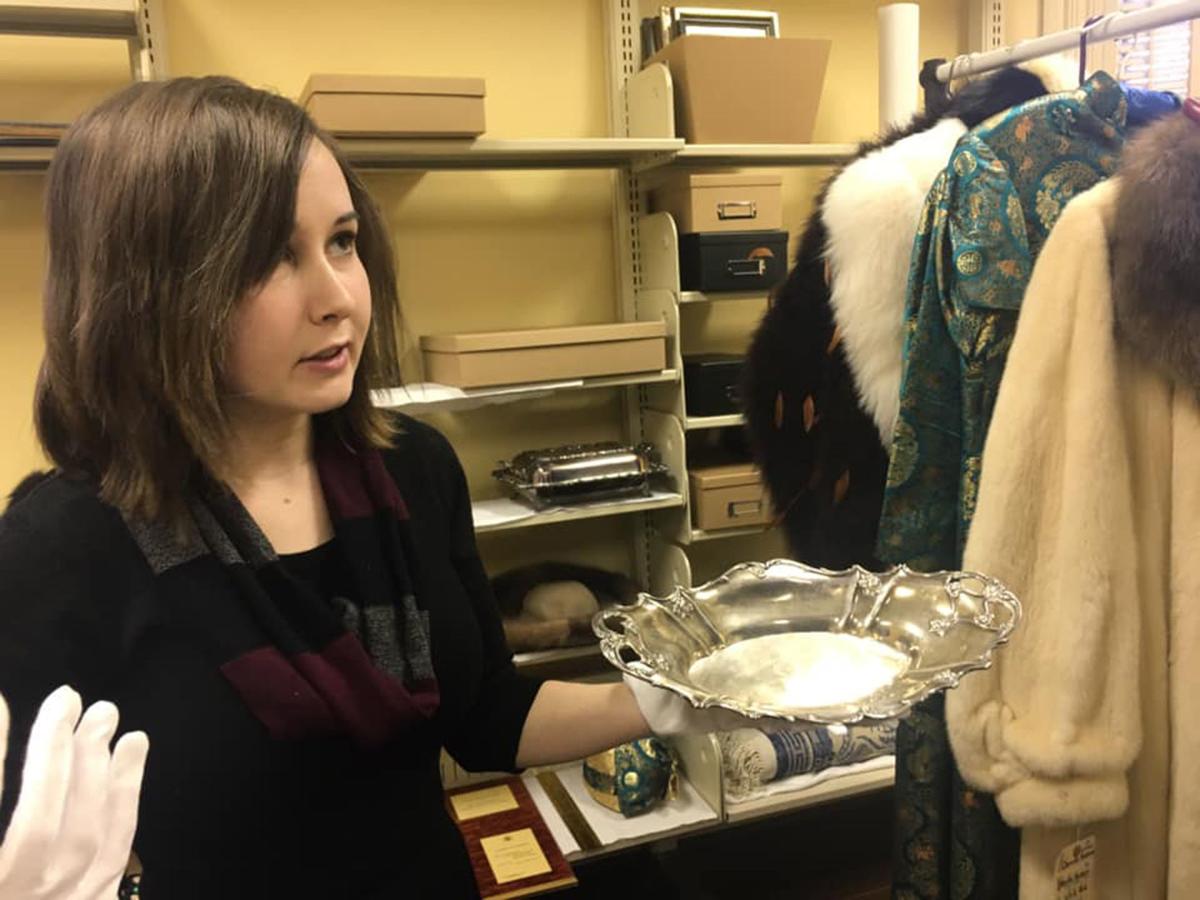 Exhibits curator and manager Kate McDannold discusses some of the silver items that were donated to the museum by Camilla Williams. 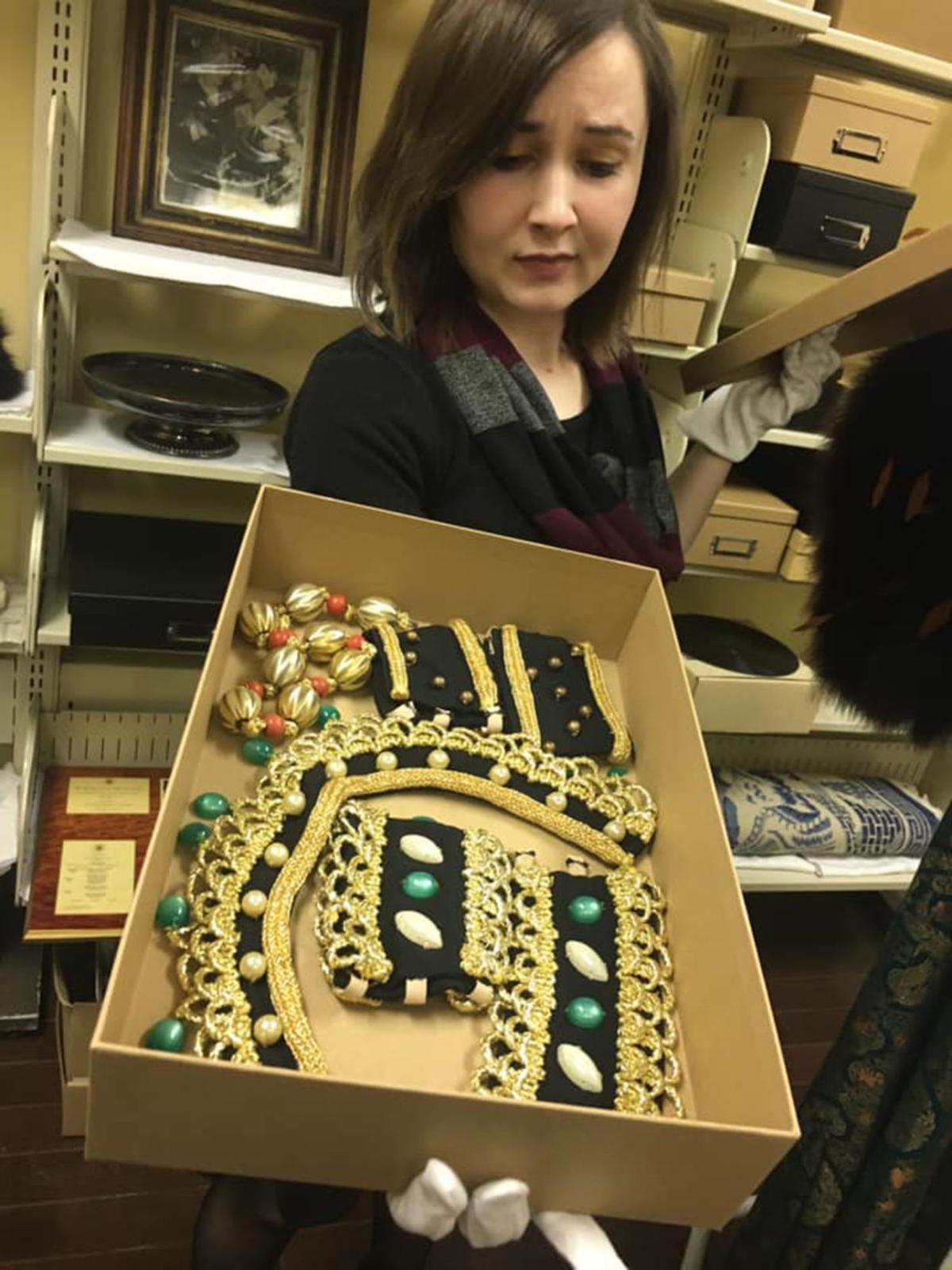 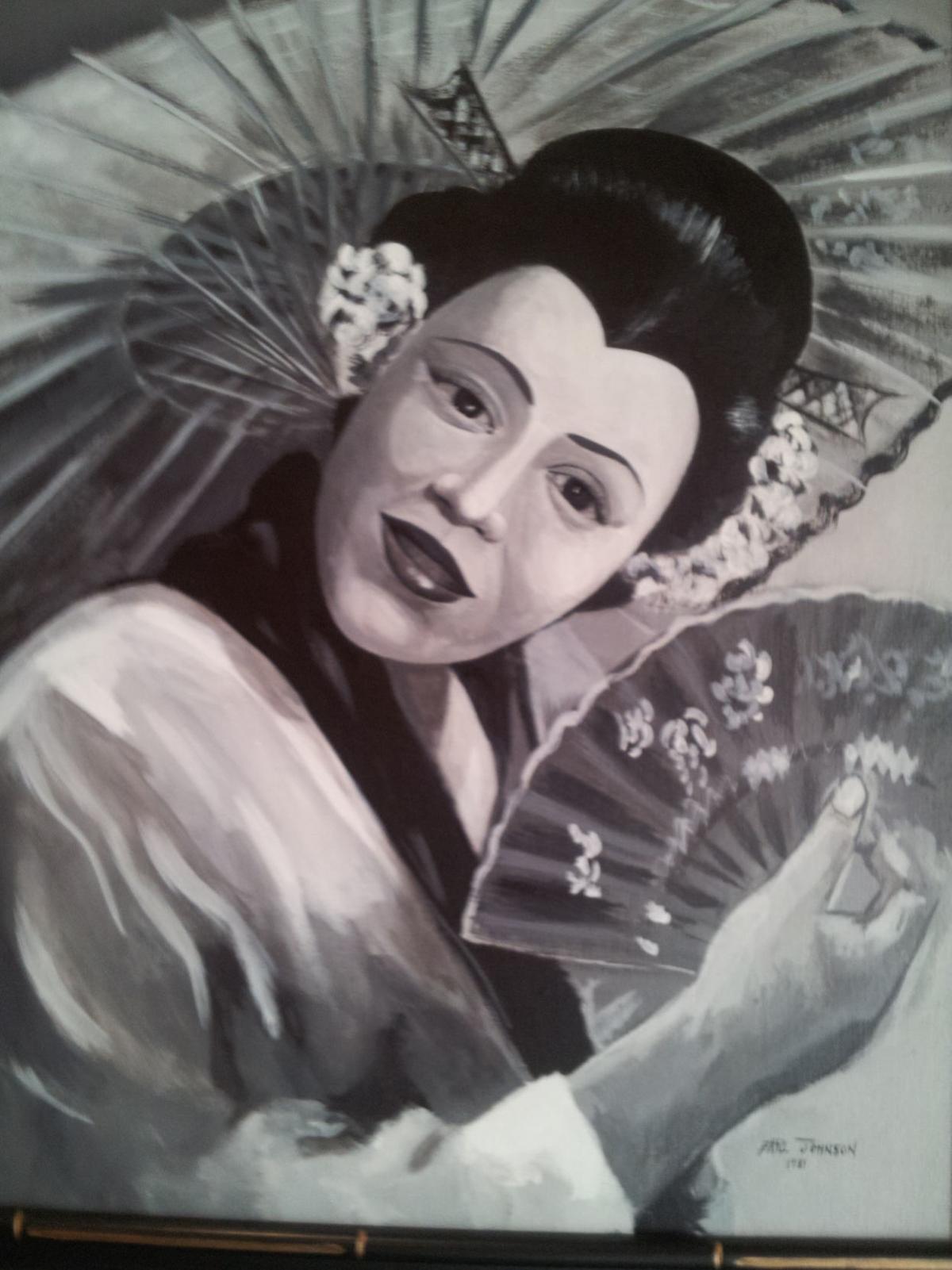 This is one of the many artistic renderings of Camilla Williams on featured in the exhibit. 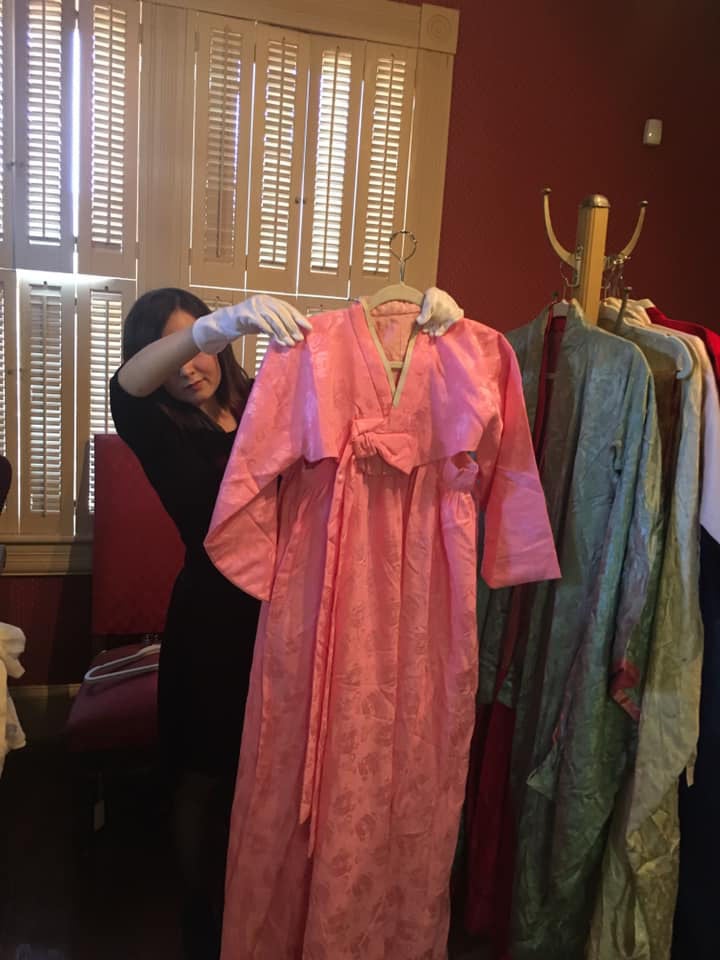 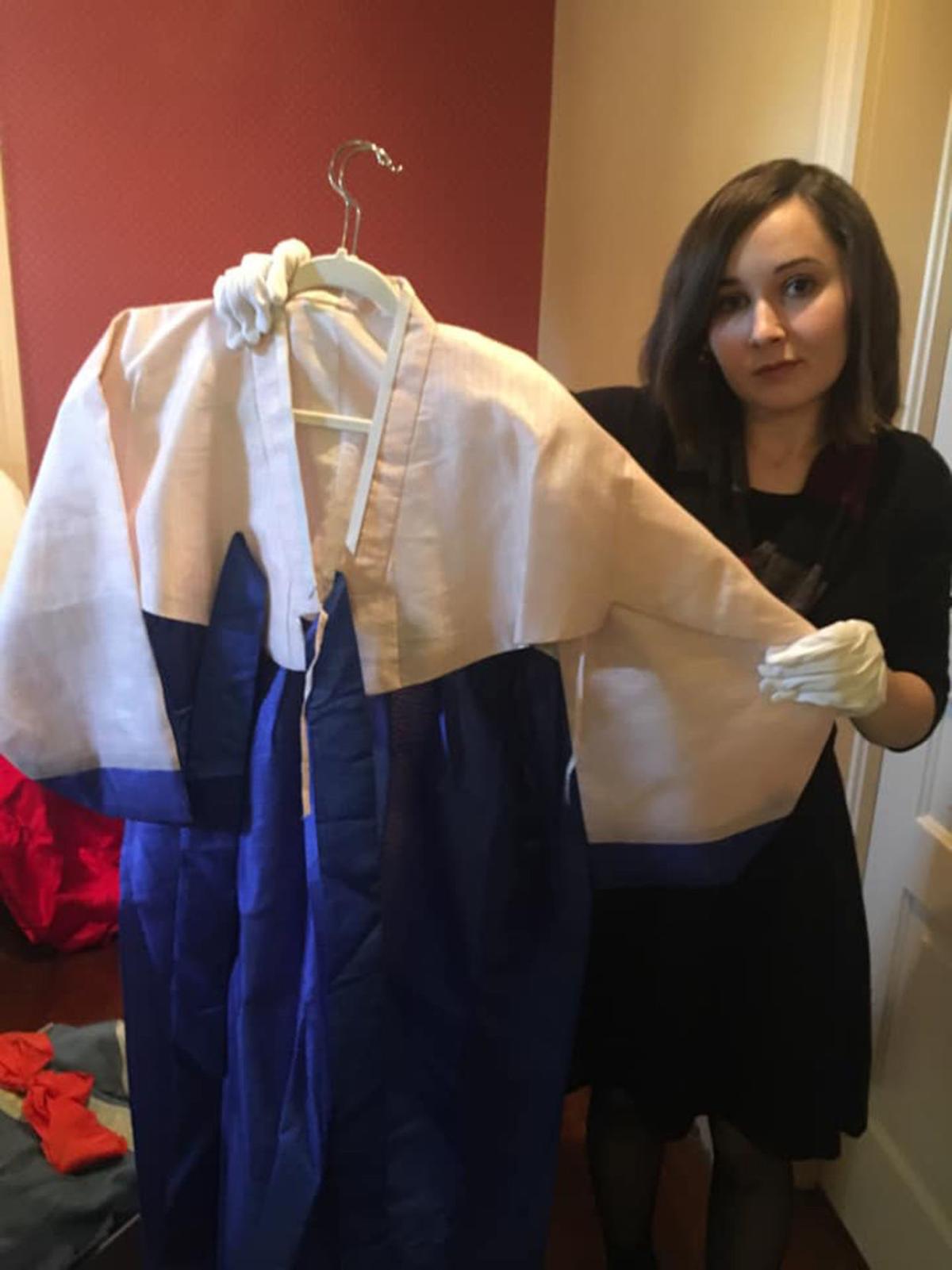 Kate McDannold, exhibit curator, displays one of the silk robes worn on stage by Camilla Williams.

On Sunday, the Danville Museum of Fine Arts and History will unveil its newest exhibit, a tribute to Camilla Williams.

The Camilla Williams exhibition “highlights the relationship of the famed New York opera diva and her hometown, Danville, while exploring the difficult path to fame in a racially divided South during the civil rights movement.”

Williams was born in Danville in 1919 and began studying voice at the age of 12 under Raymond Aubrey, who was teaching at Averett University at the time.

After graduating high school, she went on to study at Virginia State College (now University). Thereafter she returned home to teach music.

A group of Virginia State alumni, however, had another idea.

The group set up a fund in her behalf and raised enough money to pay her way to Philadelphia where she could study music in earnest. The opportunity led to a scholarship and to a performance in Stamford, Connecticut.

In the audience that night was Geraldine Farrar, who, in 1907, was the first to play the lead role in “Madame Butterfly.” Farrar offered to mentor Williams, and it was through her tutelage and influence Williams was cast for the same role in 1946, becoming the first African American to receive a contract from a major opera company.

Williams went on to become a world-renowned opera singer, but never forgot her roots in Danville.

Aware that her accomplishments might have the potential to impact the Danville community, upon her death in 2012 she gifted personal items to the museum in the hopes just such an exhibition might one day come into fruition.

The exhibits curator and manager, Kate McDannold, is a student of museum studies at University of North Carolina-Greensboro. Her contributions to the exhibition further her passion for celebrating “overlooked and underrepresented historical perspectives.”

Other contributors include artist, educator and curator Michelle Talibah who will be writing the curatorial essay. Talibah is the founding director and curator of New Door Creative Gallery in Baltimore, Maryland. In 2009, New Door Creative presented the work of late artist Morgan Monceaux, who painted a series comprising more than 30 African American opera vocalists. The series was initiated with a portrait of Williams in her role as “Madame Butterfly.” Through Talibah’s influence, the exhibit will include this work as well as others depicting Williams.

Fred Motley, storyteller extraordinaire, will be serving as the exhibit’s community engagement director. His work connects the exhibit with area schools and churches in order to bring William’s story to those who would benefit by deeper interaction with their own histories and community-based narratives — particularly those of resilience and achievement in the face of seemingly insurmountable odds.

Louis Morris Martling is serving both the museum and the exhibit as design support and organizer, along with fellow staff members C.B. Maddox, Wenn Harold and Sara Shorter.

The Camilla Williams exhibition is, in itself, setting history making precedence in its own way. It’s the hope of the Danville Museum of Fine Art and History’s new director, Elsabe Dixon, that the exhibit will be the first of the museum’s productions to go on tour.

Such an opportunity would change the status of the museum significantly from one that simply hosts small private local exhibitions to one that produces and markets shows that travel nationally and eventually internationally, setting the museum firmly on the list beside those making significant contributions in the fields of both art and history.

The exhibit was made possible through the Danville Regional Foundation’s Make More Happen grant. Through the exhibit, and others like it, the museum hopes to promote history and art in the Dan River Region while at the same time integrating awareness of history, culture and community.

Exhibits curator and manager Kate McDannold discusses some of the silver items that were donated to the museum by Camilla Williams.

This is one of the many artistic renderings of Camilla Williams on featured in the exhibit.

Kate McDannold, exhibit curator, displays one of the silk robes worn on stage by Camilla Williams.