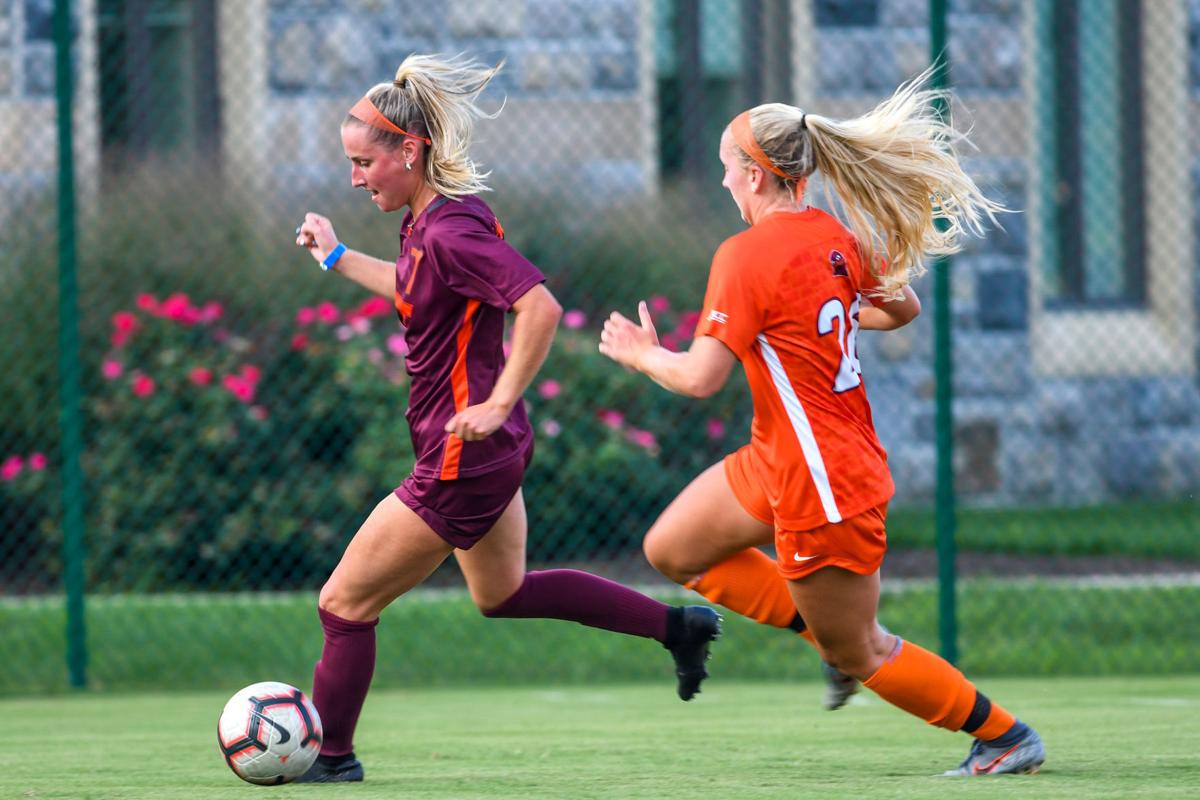 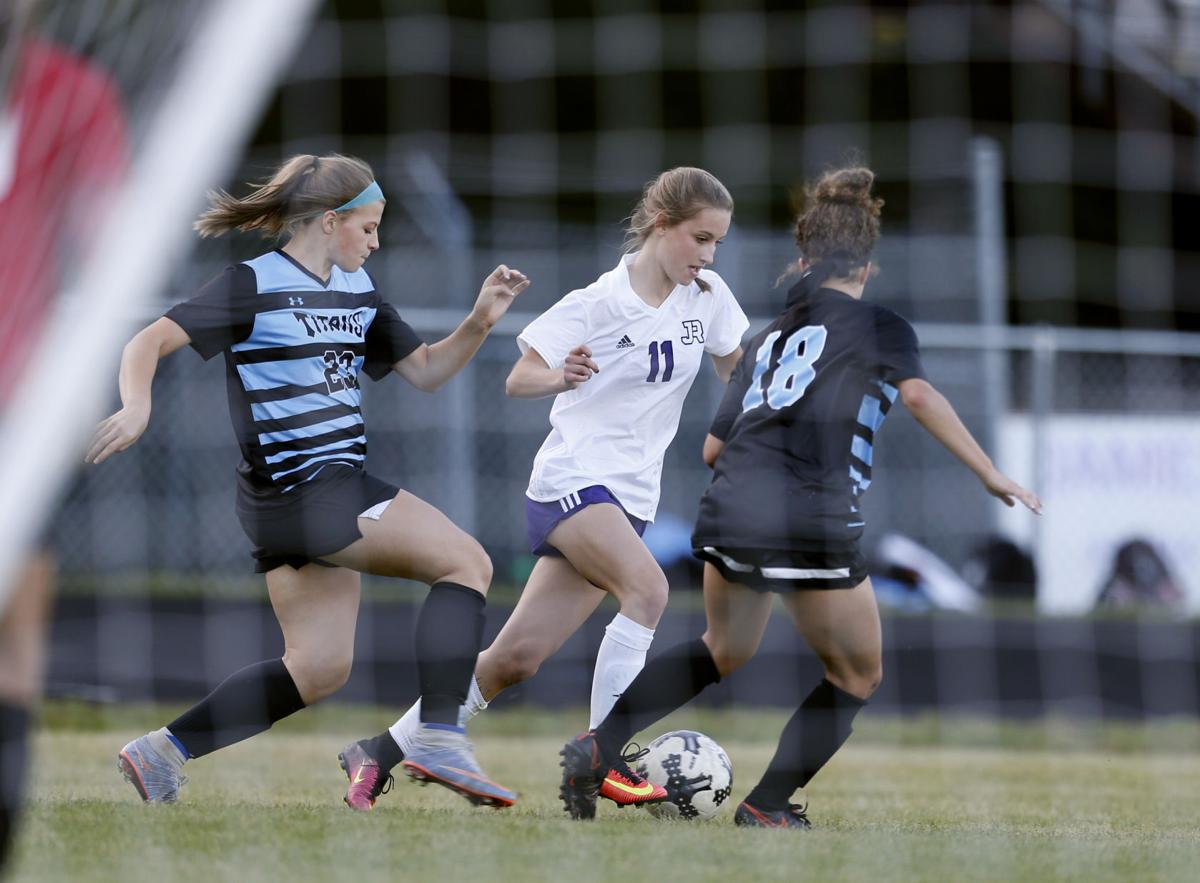 Cosby's Allie Shearer (left) and Maxine Borris fight for control of the ball with James River's Kiersten Hening during a game on Tuesday May 2, 2017. 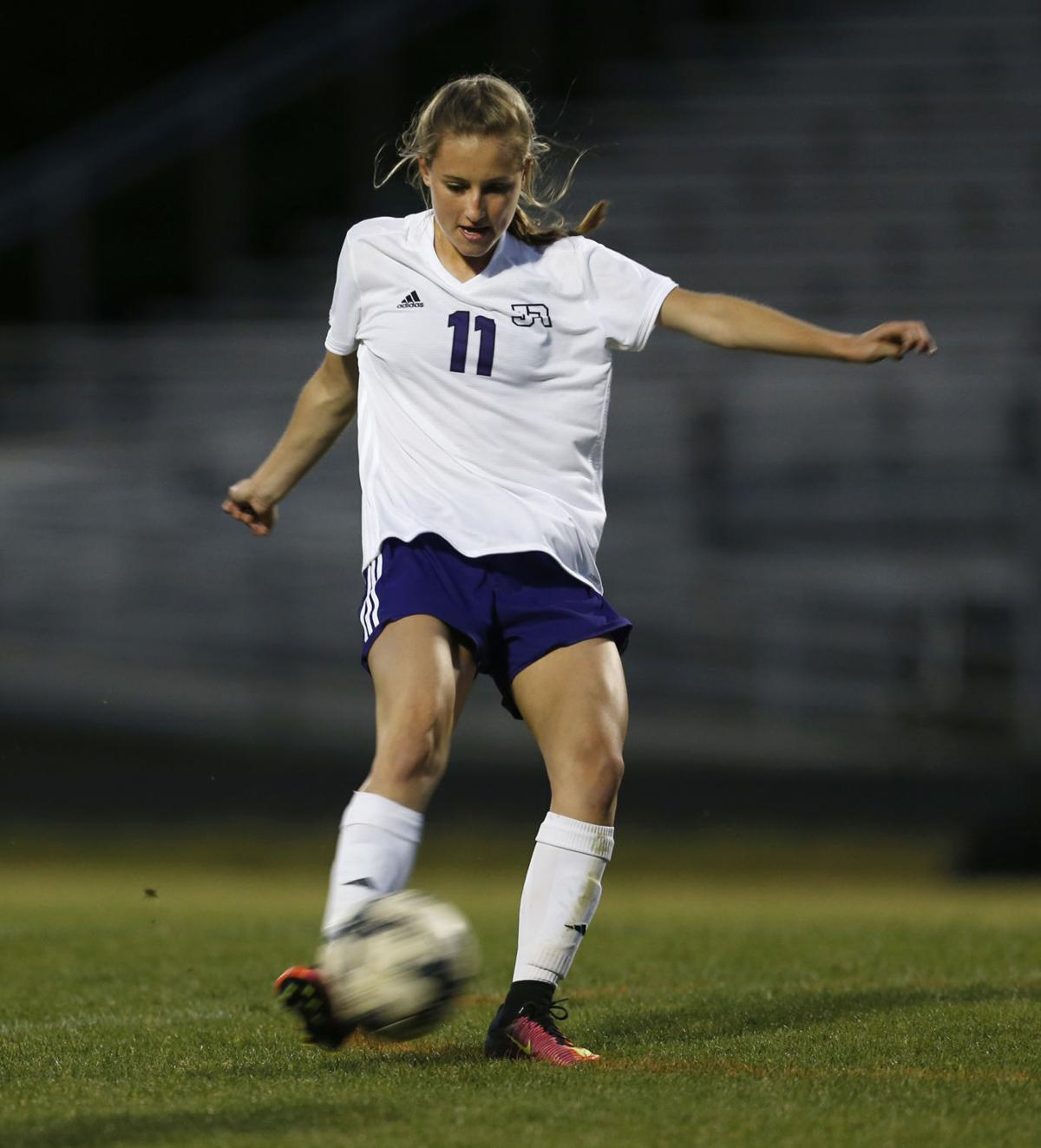 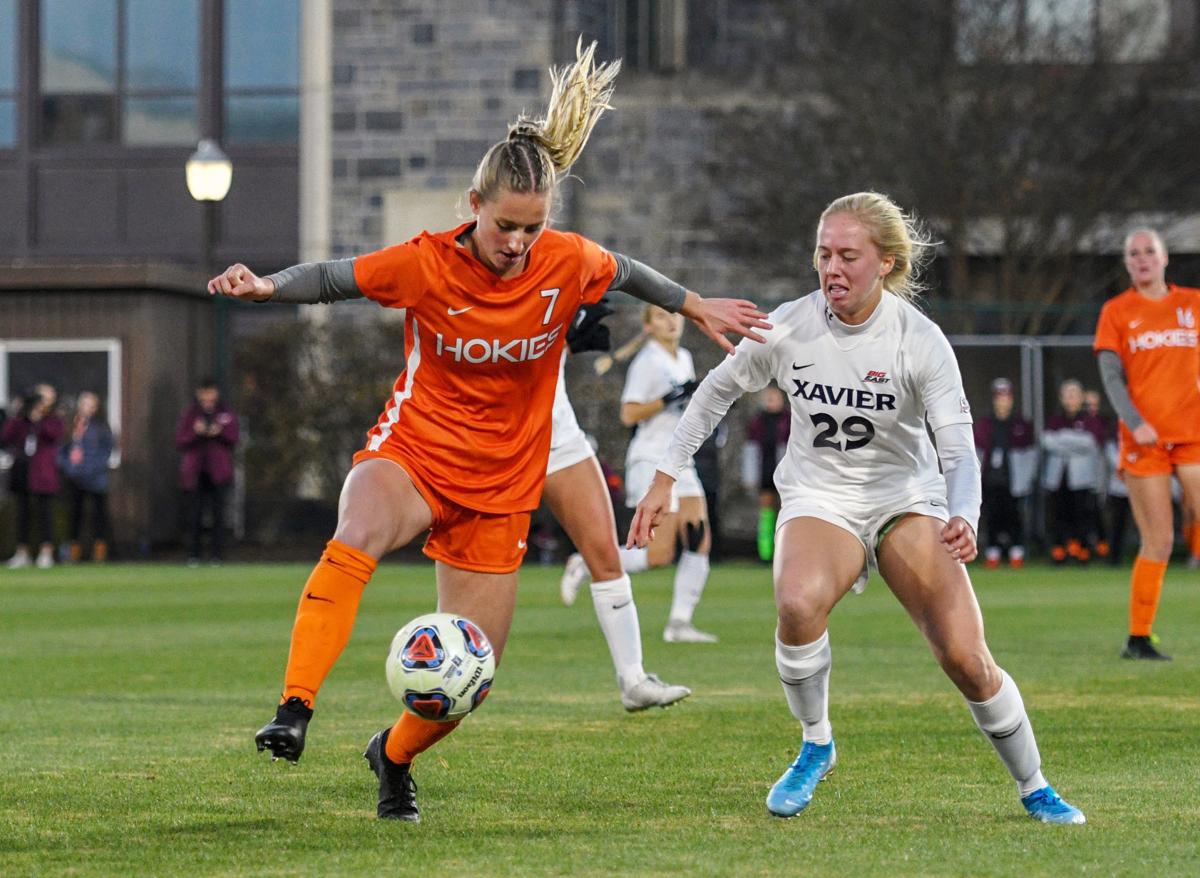 Kiersten Hening started her first two seasons at Virginia Tech, but says she was benched shortly after refusing to kneel with teammates before a 2020 game.

Former Virginia Tech women’s soccer player Kiersten Hening has filed a federal lawsuit against Hokies women’s soccer coach Chugger Adair, alleging that after she refused to join her teammates kneeling before games this season, the coach engaged in a “campaign of abuse and retaliation” that led her to leave the program.

“Hening’s stance was costly – too costly,” the lawsuit, filed March 3, reads. “Her coach dislikes Hening’s political views. Because she refused to kneel, he benched her, subjected her to repeated verbal abuse, and forced her off the team.”

Adair, who just completed his 10th season at Virginia Tech and is the program’s all-time winningest coach, declined to comment. He is being represented by university attorneys.

The university is not named as a defendant in the suit, only Adair.

An athletic department spokesman referred comment to the associate vice president of university relations Mark Owczarski, who was not immediately available.

The suit seeks a ruling ordering Adair to “undergo First Amendment training,” and to have Hening reinstated on the team, in addition to unspecified monetary awards for compensatory, punitive and nominal damages and costs associated with her case.

Hening’s attorneys did not respond to phone calls or emails requesting interviews Sunday and Monday.

Hening, a 21-year-old Midlothian native and former star player at James River High School, walked onto the Virginia Tech team in 2018 and started as a freshman and sophomore.

She was in the team’s lineup for its opening match of the 2020 season, against rival Virginia. While her teammates knelt during the pregame reading of the Atlantic Coast Conference’s unity pledge – a show of support for the social justice movement and Black Lives Matter – Hening and one other unidentified player remained standing, according to the lawsuit.

Athletes kneeling before sporting events became a national issue in 2016, when then-San Francisco 49ers backup quarterback Colin Kaepernick did it during the national anthem. Since then, athletes showing their support for racial equality and social justice by taking a knee has been a hot-button issue, often dividing the athletes from segments of their fan bases.

This past season, a few members of the Virginia Tech basketball team knelt during the anthem, while most – all but three – players at rival UVA did.

Hening’s suit claims she “supports social justice and believes black lives matter,” but, “does not support the BLM organization.”

(The BLM label has been widely used to refer to the movement for racial equality and social justice.)

The lawsuit alleges that, during halftime of the Sept. 12 season opener at UVA, “Coach Adair berated Hening for her stance. He singled her out and verbally attacked her, pointing a finger directly in her face. He denounced Hening for ‘bitching and moaning,’ for being selfish and individualistic, and for ‘doing her own thing.’”

According to the lawsuit, Adair targeted Hening instead of the other player who remained standing because that player was on scholarship and her parents had a previous phone conversation with Adair and had “warned him not to retaliate against their daughter for opposing (Black Lives Matter).”

Hening’s suit claims Adair continued to single her out and unfairly criticize her performance before and during the team’s next match against Clemson on Sept. 17, a game Hening – who started 37 matches her first two seasons at Tech – did not start. She did not start the team’s third match of the season, against North Carolina on Sept. 20, either. After that game, she left the program.

“Coach Adair’s campaign of abuse and retaliation made conditions for Hening so intolerable that she felt compelled to resign. Hening did not want to leave,” the lawsuit reads.

Charles “Chugger” Adair is 126-62-20 in 10 seasons with the Hokies and has guided Tech to seven NCAA tournament appearances, including an appearance in the 2013 national semifinals. This year’s team went 8-9, ending its season Saturday with a 4-1 non-conference loss to Auburn. The NCAA was scheduled to announce its postseason bracket on Monday.

Adair, a 49-year-old California native and 1993 University of San Diego graduate, joined the Tech staff as an associate head coach in 2006 before being promoted to the top job after the 2010 season.

According to the lawsuit, Adair was strongly supportive of the ACC’s equality pledge and even suggested having players wear the names of victims of alleged police misconduct on their jerseys, and that his direct supervisor, senior associate athletic director Reyna Gilbert-Lowery, “is a vocal supporter of (Black Lives Matter.)”

According to the lawsuit, Adair was aware of Hening’s political views prior to the start of the 2020 season, when he and a group of players were shown screenshots of private text messages she had sent to teammates.

A group of players then demanded on Sept. 3 that Adair address what they viewed as the racism of some of their teammates.

The lawsuit suggests this was the beginning of the coach targeting Hening for her political views.

"He can absolutely fly, and there wasn’t a defense we saw that could keep him from getting over the top on them."

Scott Fowler: Roy Williams laughs off another bogey. This is retirement, and he’s loving it.

This is what retirement looked like for former North Carolina basketball coach Roy Williams on Wednesday:

Sam Mellinger: Lance Leipold appears to be a sensible hire for Kansas Jayhawks football, but ...

Please take this as the compliment it’s intended to be, because the best way to describe new Kansas football coach Lance Leipold might be effectively boring. He is a lifelong football coach who will celebrate his 57th birthday this week. He likes cheeseburgers and loves his family. He used the word consistency seven times in his introductory news conference, and continuity four. He arrives ...

‘This was not for her political views’: Former Hokies player defends coach over handling of teammate who declined to kneel before games

That decision to bench her, Hamel said, had everything to do with Hening's struggles as a player, not her refusal to join her teammates kneeling during the unity pledge to show support for social justice.

Mac Engel: Kim Mulkey’s exit from Baylor is a result of strain, fatigue and pettiness

Do not believe that Kim Mulkey becoming the new head women’s basketball coach at LSU is about her following her heart back to her native state.

Cosby's Allie Shearer (left) and Maxine Borris fight for control of the ball with James River's Kiersten Hening during a game on Tuesday May 2, 2017.

Kiersten Hening started her first two seasons at Virginia Tech, but says she was benched shortly after refusing to kneel with teammates before a 2020 game.