DRY FORK — Cade Varner’s sacrifice RBI to bring home Jacob Ryan in the top of the seventh, along with a 13-strikeout performance from Bengals starting pitcher Trevor Barnes helped Bassett take the 5-4 victory over Tunstall (11-3).

Tied at 4-4 to start the seventh, Ryan led off the seventh for the Bengals (6-11) and quickly made just two pitches into his at-bat, sending the fly ball deep into the right center field gap for a stand-up double.

During Varner’s plate appearance, Ryan advanced to third on a passed ball to set up for the go-ahead run just 90 feet away.

“At first, I was trying to go yard,” Varner said on his approach to bring home Ryan. “I was trying to put more wood on it, but I had two strikes, so I shorted up, put the ball in play to help the team out.”

“It’s big. I know they [Tunstall] are one of the top teams in the region and in the [Piedmont] district, so for us making a regional push, that’s really going to help us out. This is the first time in my high school career that we beat Tunstall, so the feeling is great.”

Tunstall found themselves down 4-2 heading into the bottom of the sixth and found their way to put base runners on. After senior Caulier Barker led off the bottom sixth on a hit by pitch, senior Will Eaton hit a ground ball toward the Bengals shortstop. But on Bassett’s attempt to turn the potential double play, the ball sailed over the Bassett second basemen, giving Barker and Eaton time to advance to second and third with no outs. Daniel Hicks hit an infield single to load up the bases.

With the Trojans threatening to score, Barnes remained calm on the mound, sitting down the next two Trojans on strikes. But the fight wasn’t over for either squad.

Sophomore Aiden Watlington came in clutch for the Trojans. Having two strikes against him, Watlington drilled a hard, line-drive into right field, scoring Barker and Eaton to tie the game at four. Bassett got out of the jam with a strikeout to close out the inning.

Bassett hit the board first to open the game on a Hunter Whitlow sacrifice fly RBI that scored Varner from third. Varner got on base via hit by pitch.

Tunstall responded in the bottom half. Bassett made work of the top of Tunstall’s lineup, notching back-to-back strikeouts for two quick outs. Senior Elijah Byrd was drilled by a pitch to put a runner on first. Mason Lovern was substituted for Byrd as the pitch runner. Barker launched a fly ball deep into the right centerfield gap, hitting the top of the fence before bouncing on the ground. Lovern scored from first to tie the game at one. Senior Will Eaton rewarded Barker of his efforts, hitting a single to center field, scoring Barker and to take a 2-1 Trojans lead.

The Bengals tied the game at two on an Omahd Shareef dropped third strike, but Shareef was able to leg out the passed ball, scoring Gilbert, who drew up a walk to get on base, tying it at two.

Barnes dazzled on the mound for the Bengals. Along with his 13 strikeouts, Barnes went six innings while giving up five hits and two earned runs. Jacob Gilbert came in for the save in the seventh, shutting down the Trojans by striking out the side in order.

Bassett will carry their momentum into Halifax County on Tuesday when they face the Comets.

Tunstall returns to action on Tuesday, as they travel to Ridgeway to take on Magna Vista. Both games will be Piedmont District matchups and first pitch is slated for 5 p.m.

Friday’s finish was only fitting as the two teams played to a stalemate throughout the whole contest with Page County sophomore Bailee Gaskins and Dan River senior Emily McVay locking into an old school pitchers’ duel. S

U.S. swimmer rescued by coach after fainting at world championships 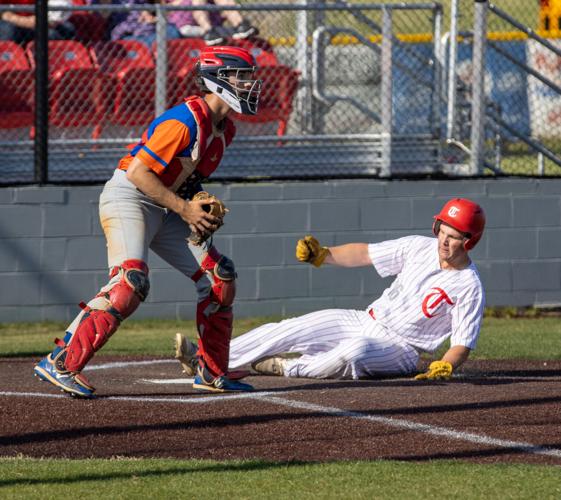 Caulier Barker slides into home plate to take a 2-1 Tunstall lead in the opening frame. 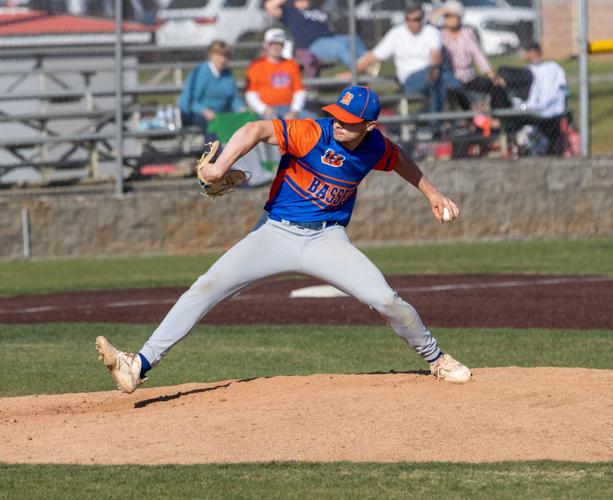