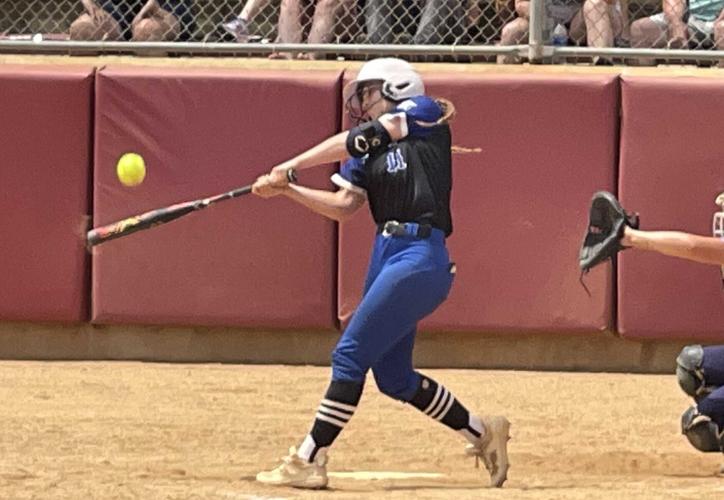 Dan River junior Grayson Snead makes contact in the bottom of the sixth of the Wildcats’ Class 2 state semifinal matchup against Page County on Friday afternoon. 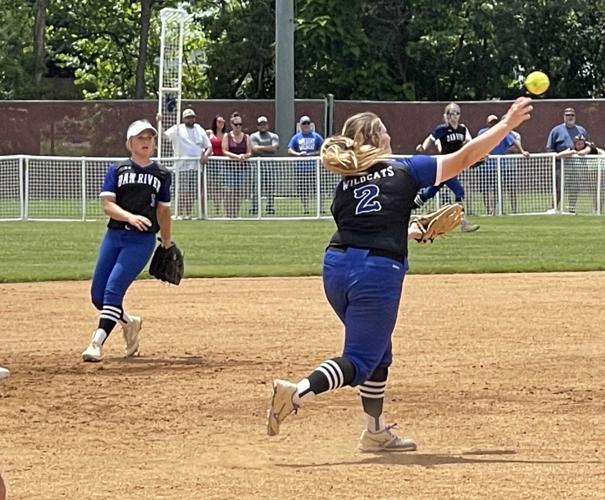 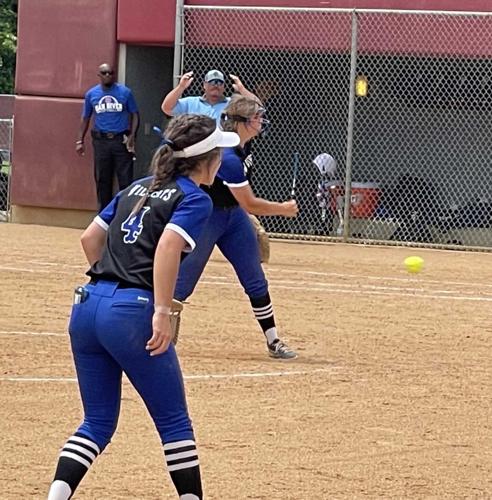 Dan River senior pitcher Emily McVay delivers a pitch in the bottom of the sixth of the Wildcats’ matchup Friday afternoon.

SALEM — Sophomore Adryn Martin’s single to right field in the bottom of the seventh lifted Page County to a thrilling 3-2, walk-off victory over Dan River in the Class 2 state semifinals Friday afternoon at Moyer Complex.

Friday’s finish was only fitting as the two teams played to a stalemate throughout the whole contest with Page County sophomore Bailee Gaskins and Dan River senior Emily McVay locking into an old school pitchers’ duel. Senior Kadence Rhinehart led off the frame with a single to right and sophomore Savannah Shifflett followed with a base knock to center to put runners on first and second base with no outs. Martin sent the Panthers spilling onto the field in celebration with her single to right that scored Rhinehart with the winning run.

Dan River junior Grayson Snead has served as the Wildcats’ home run queen this season, smacking 14 home runs, and she continued the tear in the top of the first against Page County, smacking a two-run shot to left to get the ‘Cats off to a quick 2-0 start.

The Panthers didn’t waste any time striking back, trimming their deficit to one in their half of the first on junior Jocelyne Rinker’s RBI single to center that made it 2-1.

McVay gave up a lead-off single to senior Taylor Umberger to start the second and Umberger stole second to put the tying run in scoring position, but McVay settled down from there, setting down three straight hitters — two coming on strikeouts — to keep the ‘Cats in front.

After stringing together a two-out rally in the first, it appeared Dan River was going to do the same in the third and McVay smacked a double to right-center, Snead followed with a walk and freshman McKenzie McVay followed with a walk to load the bases. However, Gaskins worked like an expert out the stretch, inducing a strikeout to end the threat and keep the score at 2-1.

The Panthers rewarded Gaskins’ meddle in the fourth, tying the game on senior Kirsten Hensley’s RBI single to center that made it 2-2 heading into the top of the fourth.

Dan River put together another rally in the fourth when freshman Cora Barrett reached on an error and junior Olivia Morris smacked an infield single to put runners on first and second base. Sophomore Ashlyn Chappell moved both over with her sacrifice bunt pack to the pitcher, but Gaskins was once again up to the challenge, grabbing a big strikeout to end the frame and threat.

Gaskins wasn’t the only one that worked strong out of the stretch as Emily McVay found herself in a jam in the bottom of the fifth after plunking Martin with a pitch and senior Marissa Munger reaching on an error. However, McVay got three straight outs to end the inning and keep the game tied moving to the final two frames.

Gaskins got the win in the circle, scattering five hits and a pair of runs while striking out nine.

Snead led the ‘Cats with a pair of RBIs.

Rinker, Hensley and Martin all drove in runs for Page County.

Dan River’s three seniors, McVay, Rebekah Stowe and Katie Moser finish their four-year careers with a combined record of 46-14 and with an appearance in the state semifinals and state quarterfinals.

U.S. swimmer rescued by coach after fainting at world championships

Dan River junior Grayson Snead makes contact in the bottom of the sixth of the Wildcats’ Class 2 state semifinal matchup against Page County on Friday afternoon.

Dan River senior pitcher Emily McVay delivers a pitch in the bottom of the sixth of the Wildcats’ matchup Friday afternoon.