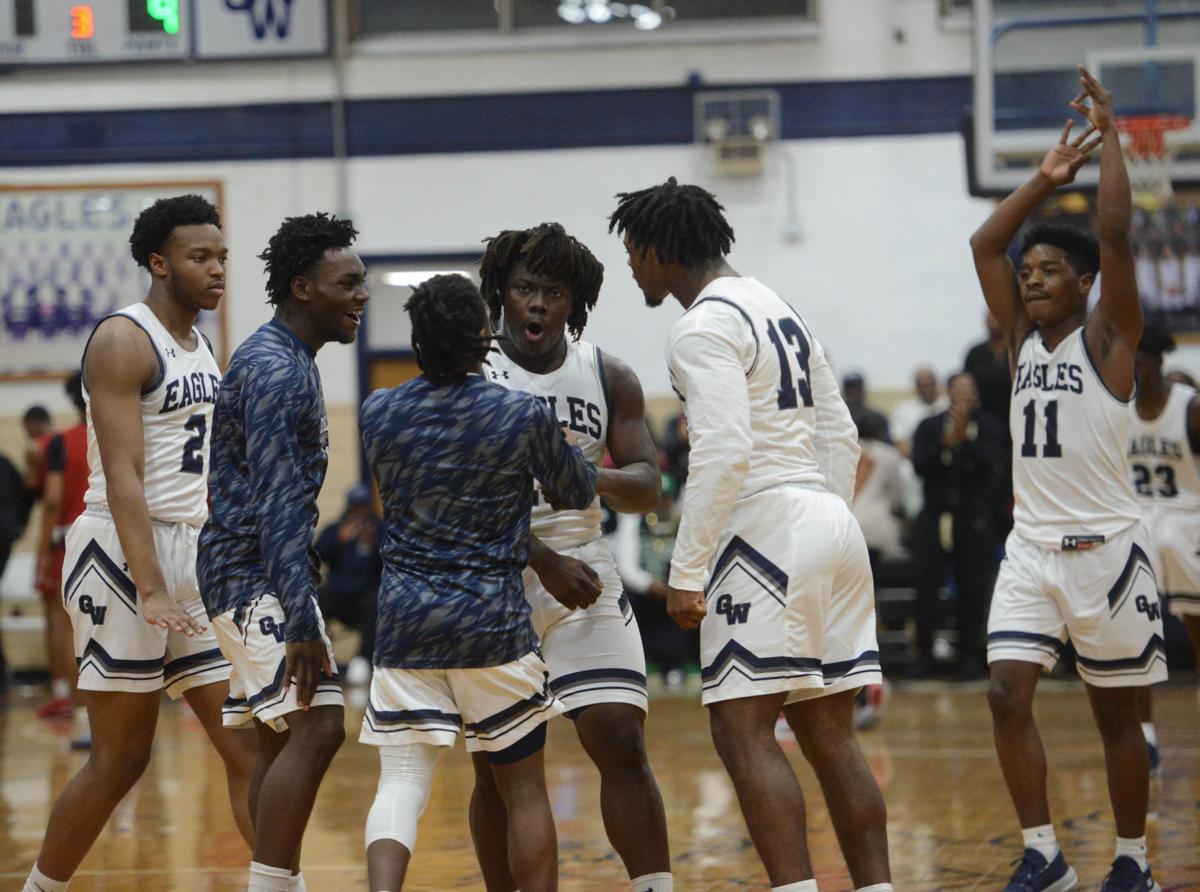 George Washington teammates gather around senior guard Wesley Graves to celebrate his buzzer-beating 3-pointer at the end of the first half against Martinsville on Monday. 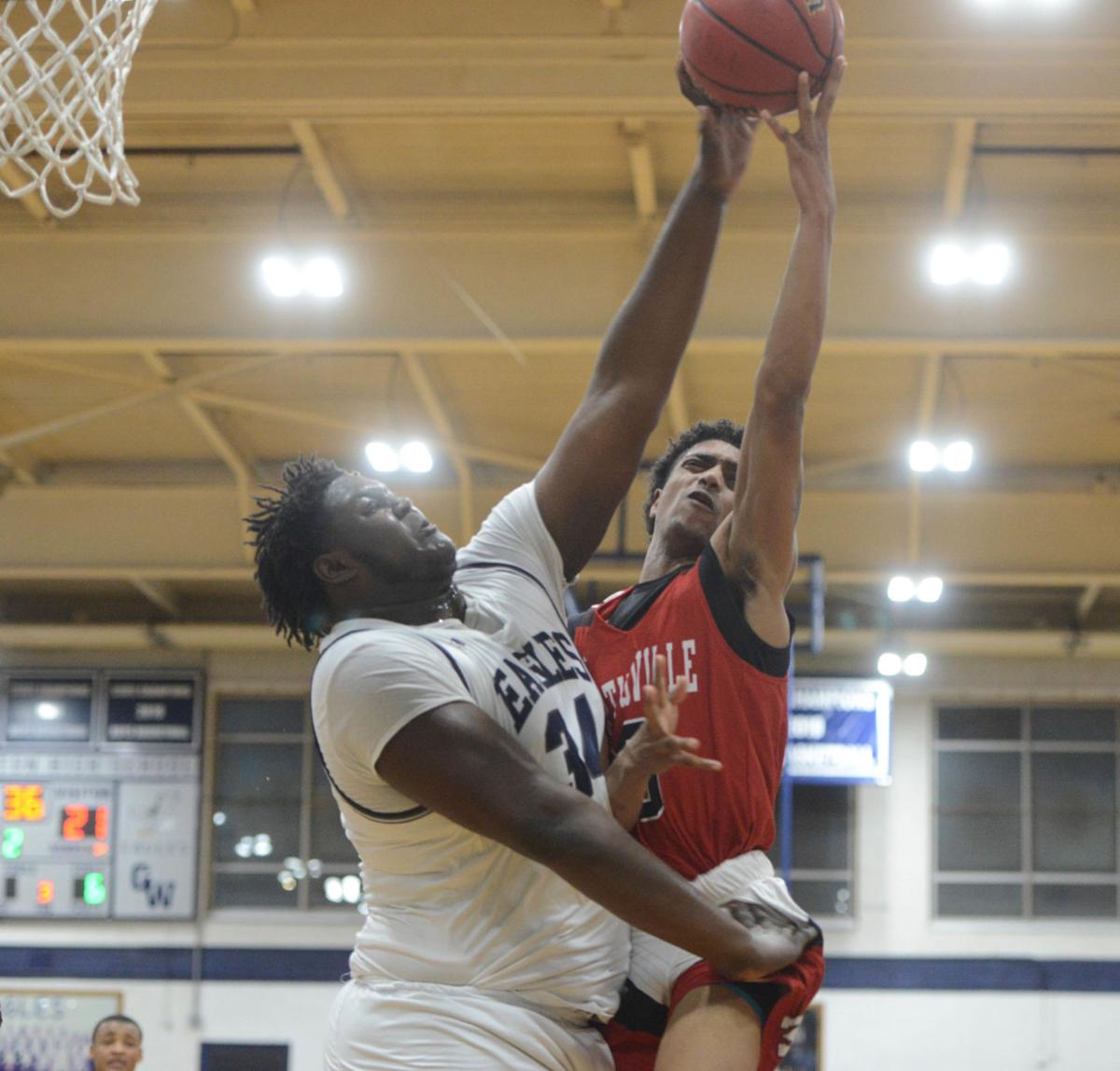 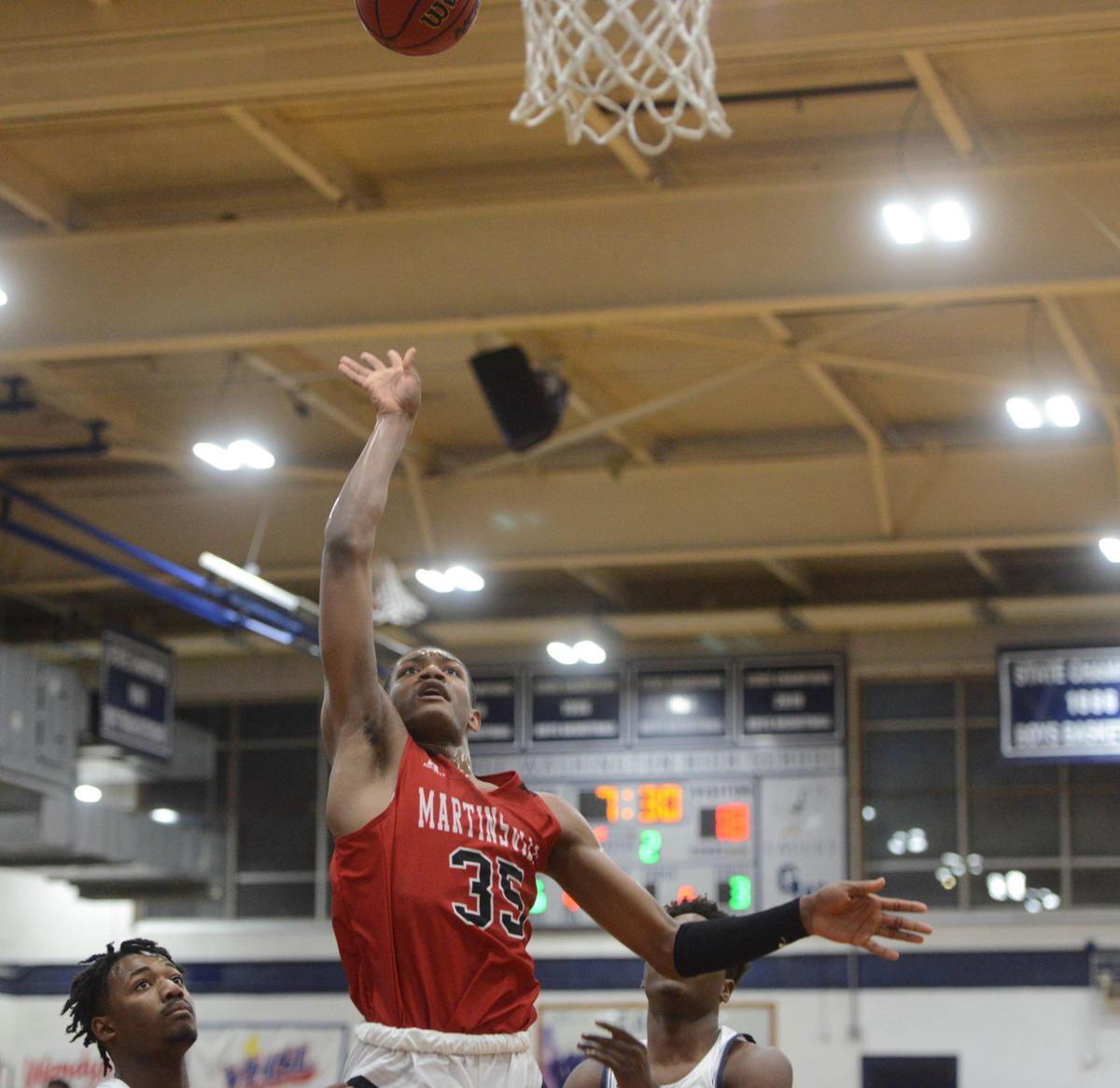 Martinsville junior Jaheim Niblett attempts a floater in the lane during the first half of Monday's game at George Washington High School.

The Eagles ran their streak to eight games Monday night with a 64-54 win against those same Bulldogs, avenging the earlier loss and creating some breathing room at the top of the Piedmont District.

“When we lost to them that first time,” GW senior guard Wesley Graves said, “we’ve just been counting down the days until we got them again at our house.”

Graves finished with 15 points in the contest, but 13 of those came in the second quarter—saving the Eagles from a disastrous start.

GW (16-6) took the first lead of the game but struggled to build on it, mostly due to missed free throws. The Bulldogs rattled off an 18-2 run and went into the second quarter ahead 18-5.

“I thought it may have been our best quarter of the year,” Bulldogs coach Jeff Adkins said. “We’re playing in control, and we ran our half-court offense.”

Five different Eagles scored during the second quarter, but Graves briefly stole the spotlight by hitting a trio of 3-pointers, including one that beat the halftime buzzer.

“I shoot a lot in practice, so I work on my confidence a lot,” Graves said. “When I get in and they’re falling, you got the hot hand and you gotta shoot until you miss, so that’s what I did.”

Overall, GW outscored Martinsville 26-9 in the quarter and took a 31-27 lead into the break.

“The worst thing they could have done is die down,” Eagles head coach Jermaine Parker said.

Instead, GW retook the lead for good at 23-21 after Donavan Howard hit a pair of free throws. Martinsville got within one point five times over the course of the rest of the game but could not reclaim the lead.

Howard finished with a team high 16 points for GW.

For long stretches of the game, Martinsville played without junior forward Jaheim Niblett or senior guard Troy Brandon because of foul trouble. When Niblett picked up his second and third fouls in quick succession in the second quarter, GW began its run in earnest.

Brandon ended up fouling out with five points. Niblett finished with a game-high 19 points to go with four fouls.

“We’ve got to have Troy and Jaheim on the court, and when they’re not on the court, we’re in trouble against a team like GW,” Adkins said.

In the fourth quarter, Martinsville got within three points, at 51-48, after a Niblett floater, but GW’s Justin Bethel stretched the lead back to six with a 3-pointer, and Howard followed the next time down with a layup for an eight-point cushion.

Martinsville never got closer than six points the rest of the way.

“The slow start ... that’s something that can hurt us down the road because now we’re getting to the tougher games,” Parker said. “You can’t start off with the slow starts and expect that you’re gonna bounce back, so we’ve gotta work on some things.”

“This was a great game for us because this is the type of game we’ll play in the tournament,” he said. “We’ll learn from it.”

'Might be a nightmare': Area coaches walk line between optimism and skepticism regarding return of high school sports

The VHSL’s plan calls for winter sports — basketball, gymnastics, indoor track, swimming and diving and wrestling — to begin Dec. 14, with the first competitions on Dec. 28.

George Washington teammates gather around senior guard Wesley Graves to celebrate his buzzer-beating 3-pointer at the end of the first half against Martinsville on Monday.

Martinsville junior Jaheim Niblett attempts a floater in the lane during the first half of Monday's game at George Washington High School.