'Opportunity of a lifetime': Caine DeVivi resigns after decade of coaching Tunstall softball
0 comments
Share this
Only $3 for 13 weeks
1 of 2 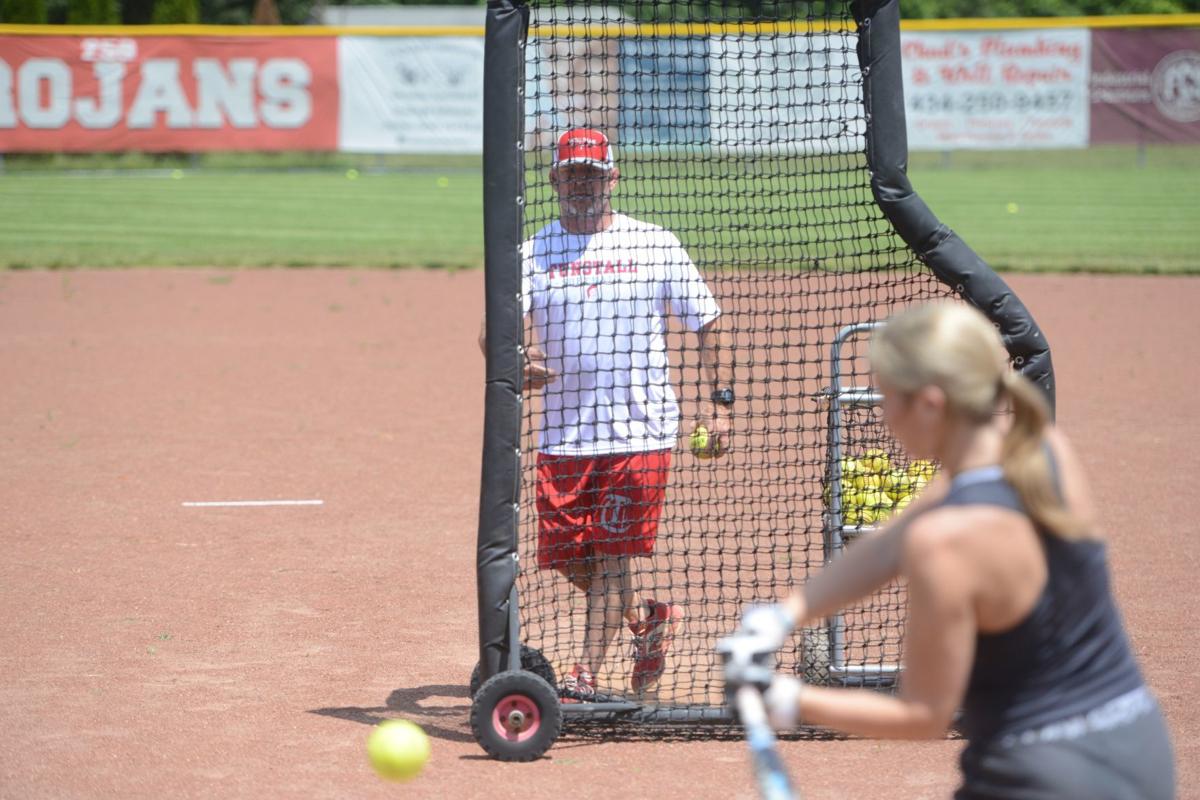 Caine DeVivi throws batting practice to his daughter Kayley DeVivi on Wednesday. Caine coached Tunstall for 10 seasons before resigning this week. Kayley was a two-time First Team All-State outfielder for the Trojans and will attend Longwood University to play softball. 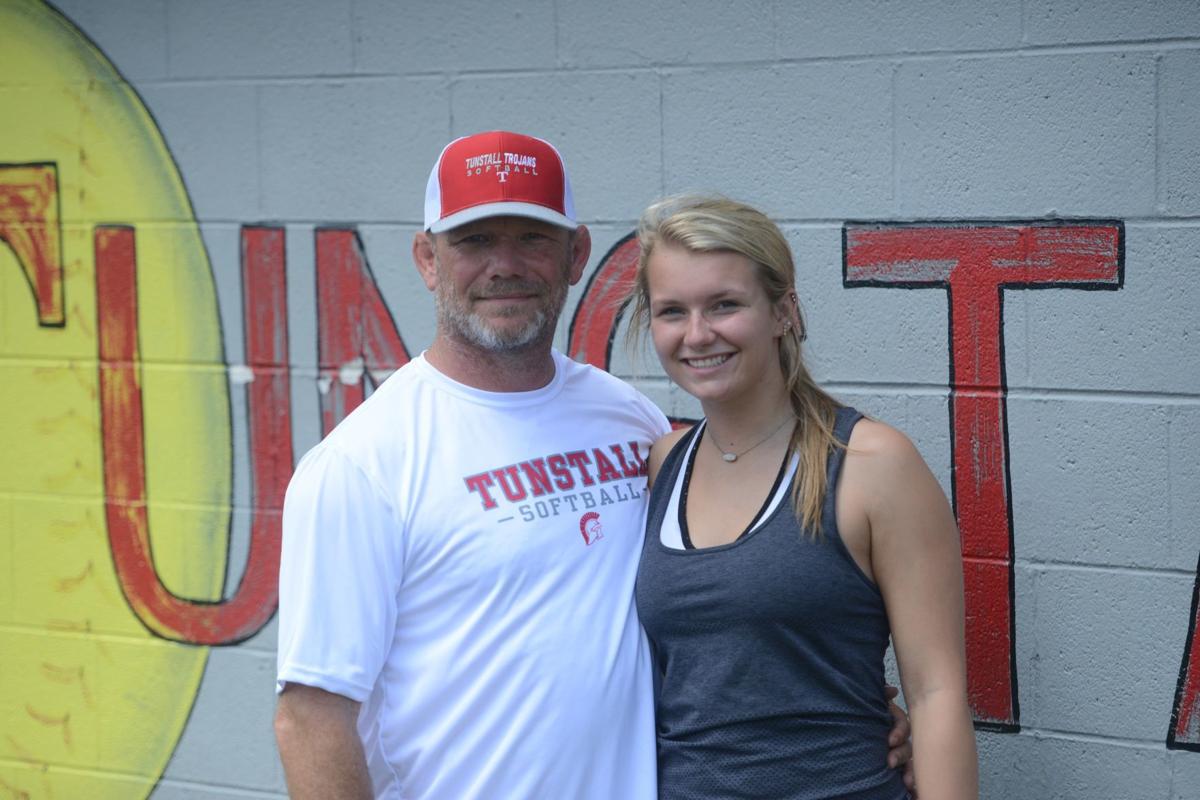 Caine DeVivi coached Tunstall for 10 seasons, including three with his daughter Kayley DeVivi as a centerpiece of the team.

Longtime Tunstall softball coach Caine DeVivi has always had a lot of pride for the school’s field.

Pride not just in the team he put on it, but also in the condition of the field itself.

For the last 10 years, DeVivi manicured the outfield grass and the infield dirt to the point it met his standards.

“People don’t understand there’s an equal amount of my time that went into the preparation of this field as there was to the actual time spent coaching,” he said Wednesday.

DeVivi had a feeling the 2020 season would be his last coaching at Tunstall, given that his daughter, Kayley, was graduating and going off to play at Longwood in the fall, but the emergence of the coronavirus pandemic put a more definite point on the matter.

DeVivi, 46, submitted his letter of resignation as the school’s softball coach Tuesday. Pushing aside the pandemic, he said he is leaving on his own terms.

His teams made it to the regional semifinals the last two years and lost to Staunton River both times.

“Losing that game in the semifinal last year, unbeknownst to any of us, was my last game and our up-and-coming seniors’ last game of playing,” he said.

Because nobody got to have their ideal final season, that also means the DeVivis missed out on having their moment on senior night.

“It was an absolute blessing for me to not only have the opportunity to coach one of my children for all this time, but to have that kid end up truly being one of the best student-athletes I’ve ever coached on and off the field,” DeVivi said.

Kayley DeVivi, a two-time first-team, all-state outfielder, said she and her father always had a good relationship, but sharing the sport together helped them grow even closer.

“In softball, knowing that after school I’m coming out here and I’m going to do something I love to do with my dad and knowing that he’s not going to sugarcoat anything, it’s been a good experience,” she said.

Caine DeVivi graduated from Tunstall in 1992 and wrestled briefly at Campbell before injuries cut his career short. He transferred to Longwood during his senior year and earned his teaching degree in 1996.

He had teaching jobs at George Washington, Tunstall and Magna Vista high schools over the years and found time to coach baseball, softball, wrestling, football and golf along the way.

In 2008, Roger Cook, the founder of Tunstall’s softball program, approached DeVivi and asked him to return to the school to coach the JV team. DeVivi had been out of coaching for four years at that point after having accepted a sales job with Diamond Paper Company. He was allowed to coach on the side because he was paid by commission.

“I really had a burning desire [to coach again],” he said.

He joked his sales dropped a little, but it was great to be back in a dugout. When Cook retired in 2010, DeVivi became the head coach.

“When they asked me to take over the program, I knew it was an opportunity of a lifetime,” DeVivi said.

He had to quickly rebuild the program, though, because the Trojans had just graduated eight seniors, and very few players coming up were taking part in travel softball leagues as the classes before them had. DeVivi quickly implemented a winter training program, but it still took time to develop a winning team.

Tunstall had some bumpy seasons before finally breaking through in 2012 for the first of two consecutive district titles. A few more lean years followed before, in 2017, a group of players including Kayley, Nia Green, Saige Johnson, Brooke Craddock, Harley Hearp, Cassidy Scarce, Abby Wallace and others rounded into form and Tunstall became a state tournament contender once again.

Though he lamented the fact his teams rarely had a truly dominant pitcher, DeVivi was proud of the offensive technique his teams were able to find. In 2019, Tunstall scored 266 runs on the strength of 340 hits, the eighth- and fifth-most in VHSL history, respectively. Kayley DeVivi also tallied a VHSL record 19 doubles as a junior.

“I’m sure the bats have changed [over time], but I have to believe that my approach as a coach to hitting has had something to do with that,” DeVivi said.

Upon his exit from coaching, he expressed gratitude for being “blessed with great assistants” over the years.

“They definitely made my job easier,” he said.

Similarly, DeVivi was thankful during his career for the patience and understanding from his wife, Carla.

“It makes it a lot easier to come home when you know you have that support,” he said.

DeVivi will retain his physical education teaching position this year, and he’ll be an assistant wrestling coach so he can watch his son, Cade, develop. Cade, a rising senior, will also play baseball and probably football for Tunstall next year.

DeVivi missed out on much of Cade’s athletic career up until now, so he’s happy to have more time to dedicate to him.

“I think that’s a big thing for Cade to know that Dad is watching him,” Kayley DeVivi said.

Also, given he’s not going away completely, DeVivi said he’ll still be around the cut the outfield grass.

Caine DeVivi throws batting practice to his daughter Kayley DeVivi on Wednesday. Caine coached Tunstall for 10 seasons before resigning this week. Kayley was a two-time First Team All-State outfielder for the Trojans and will attend Longwood University to play softball.

Caine DeVivi coached Tunstall for 10 seasons, including three with his daughter Kayley DeVivi as a centerpiece of the team.