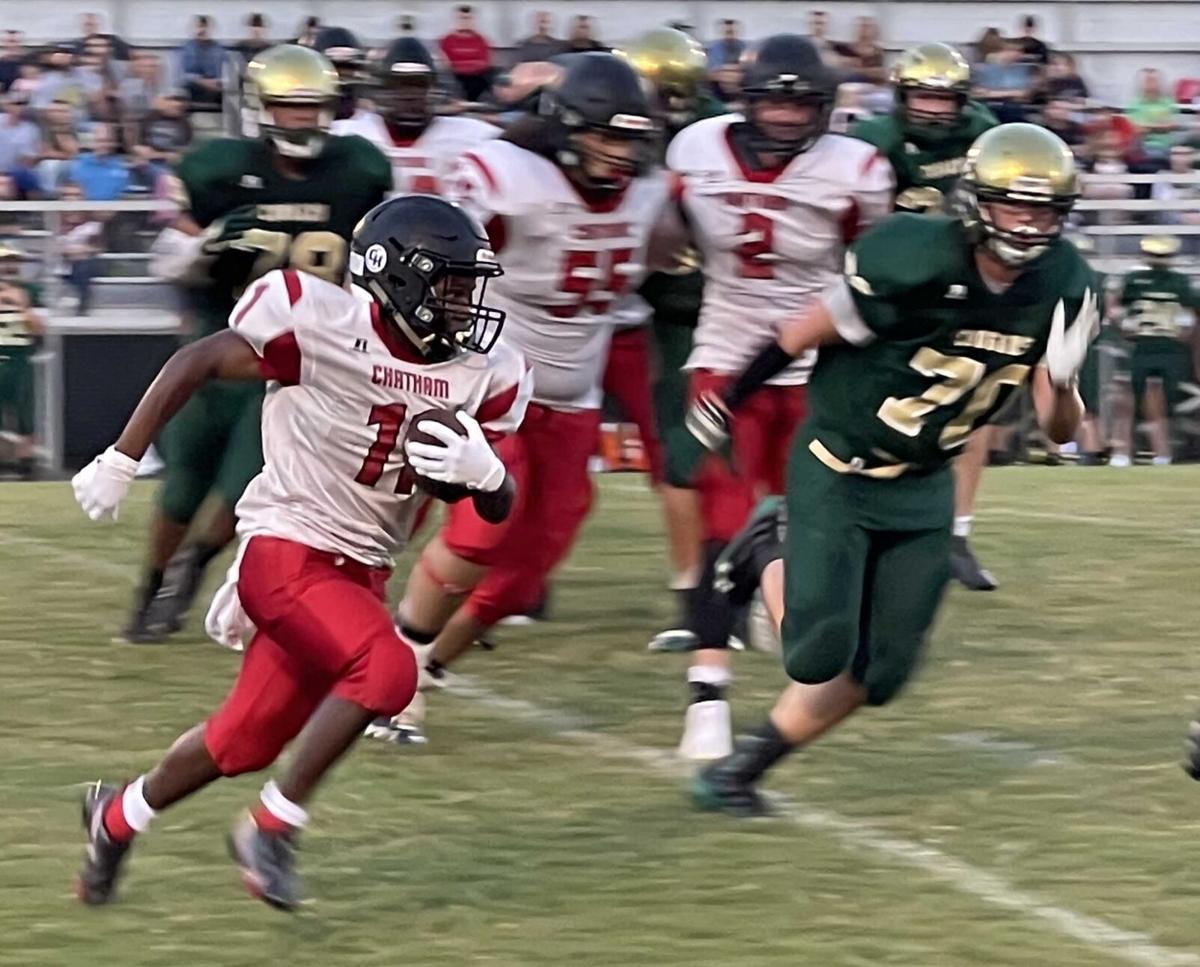 Junior running back Dermont Kyle breaks loose for a big gain on Friday night. Kyle finished with a pair of rushing scores for the Cavs. 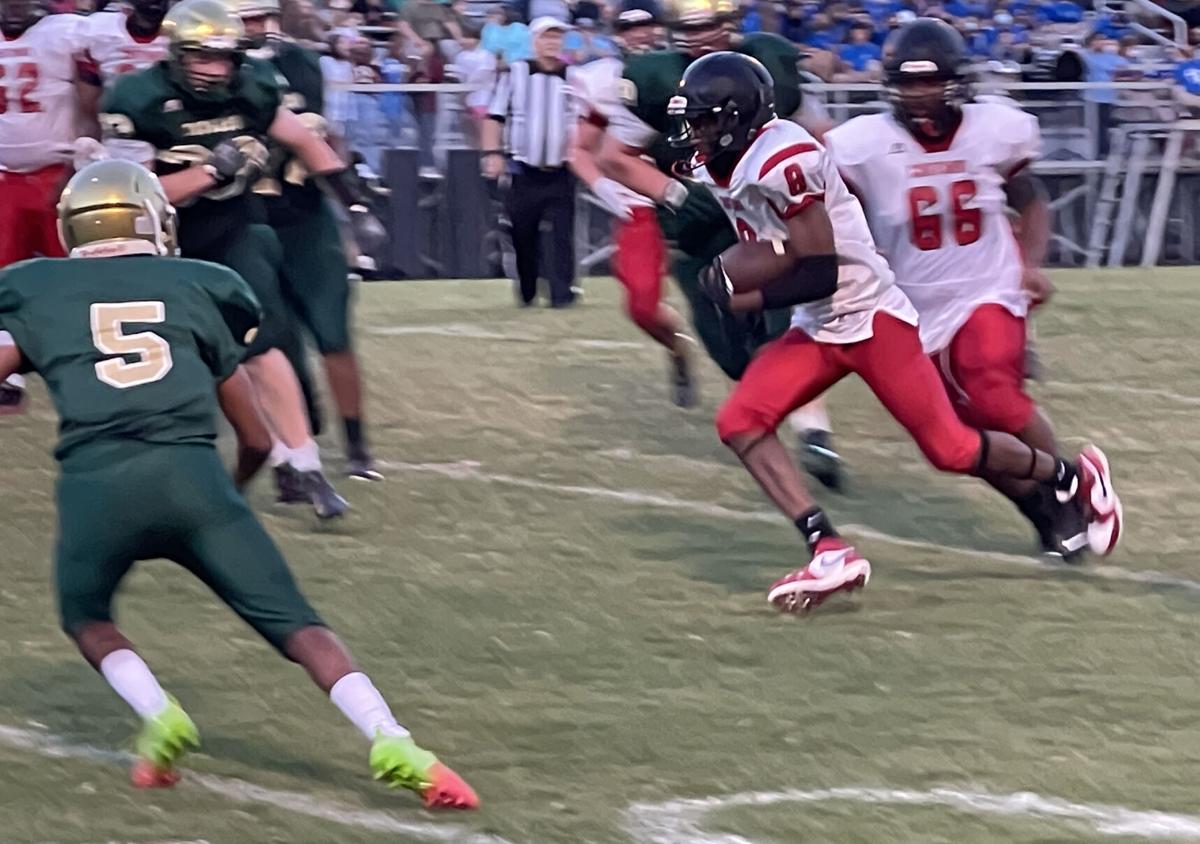 Junior back Kendell Sanders cuts loose for a first down against Patrick County on Friday night. Sanders finished with a pair of scores for the Cavaliers. 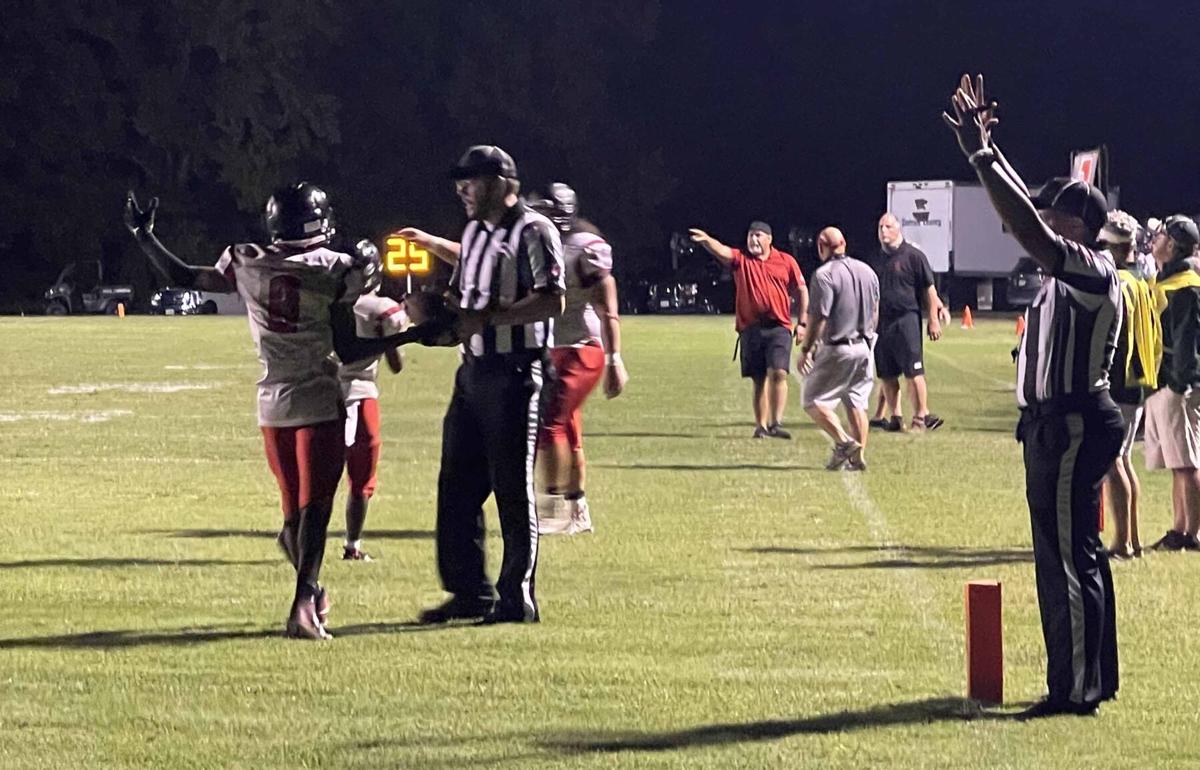 Chatham senior running back Chance Long celebrates what appeared to be a converted two-point conversion for the Cavs on Friday night. However, a holding penalty negated the conversion.

Hill, in his first season as starting quarterback, rushed for a pair of touchdowns — including his game-winning 96-yard scamper — and threw for another in Patrick County’s thrilling 34-28 victory over Chatham on Friday night.

Patrick County (1-2) found itself in the shadow of its own end zone after the Cougars’ defense forced Chatham into a turnover on downs and halted what appeared to be a Cavaliers’ scoring drive that would’ve tied the game with just over three minutes remaining.

Starting from his own 4-yard line, Hill broke up the middle for a 96-yard scoring run on a quarterback draw that gave Patrick County a 34-21 cushion with 3:28 left on the clock.

But Chatham responded with a 65-yard scoring drive by junior back Dermont Kyle that pulled the Cavs within a score at 34-28 with 55 seconds remaining in regulation.

With time running down on its comeback attempt, Chatham (2-1) went to the onside kick and junior Bradley Qunitero placed the ball perfectly, but it trickled out of bounds to essentially seal the game for the Cougars.

Despite the loss, Chatham coach Jack Turner was proud of the grit his team showed in its late comeback attempt.

“I think coach [Morrison] does a great job and he needs to be commended,” Turner said. “He had his kids ready tonight and he saw what we were doing on defense and exploited it and that’s how it works.”

After taking its first lead on Hill’s 1-yard scamper at the beginning of the fourth, Patrick County broke the game open a bit with Hill’s long touchdown run that made it a two-score game.

However, Kyle’s short scoring scamper brought the Cavaliers back within a possession at 34-28 and gave them a bit of hope, bringing the sideline and its sizeable crowd of supporters on their feet.

Once again, Turner was quick to credit his team’s toughness, while also finding fault in himself for the loss.

“Let me tell you something, these kids showed great resilience tonight,” Turner said. “Listen, I’ve got to do a better job of coaching. Kids win games, coaches lose games, and I lost the ballgame. Plain and simple. This is on coach Turner. I hate it for the kids because they work hard for me, and I have great belief in our kids. I’m not mad at them, I was probably the least animated I’ve ever been coaching tonight.”

After playing to a 14-14 draw at the half, senior running back Ben Hylton helped Patrick County start the second half on the right foot as he broke loose for a 60-yard scoring run that gave the Cougars their first lead at 22-14.

Chatham had an answer, going to its running game in putting together a methodical, 14-play, 79-yard drive capped by junior Kendell Sanders’ 10-yard scamper that made it 22-21 with 58 seconds left in the third.

Hill took over from there, scoring on runs of 1 and 96 yards to put the game out of reach for Chatham.

Sanders helped the Cavaliers quiet the home crowd from the start when he hauled in a pass from senior quarterback Mason Anderson to give the Cavs a quick 6-0 lead on their first possession.

Kyle doubled Chatham’s advantage when he capped a long-scoring drive with his 2-yard run and converted the ensuing 2-point conversion to give the Cavaliers a 14-0 lead with 9:52 left in the first half.

That’s where Hylton stepped in, scoring his first of two touchdowns, on a 65-yard run that made it a 14-6 game with 9:33 remaining in the second quarter.

Hill stepped up next, finding senior Krish Patel for a long 79-yard touchdown down the left side and Hill converted the two points, knotting the score at 14-all heading into the break.

Sanders and Kyle each had big nights for Chatham, scoring a pair of touchdowns apiece.

Hylton and Hill each added a pair of scores for Patrick County, while Patel added the Cougars’ lone scoring reception.

Chatham returns to action Sept. 24 when it hosts rival Gretna to kick off its Dogwood District schedule. Kickoff is scheduled for 7 p.m.

Former Dan River coaches Ferrell Edmunds and the late David Bullins and Dennis Saunders wore many different hats over the course of their coaching careers.

For years, the George Washington-Bassett football game has been as entertaining as a stormy day with no power or Wi-Fi with GW winning the las…

DRY FORK — For the second time this season, the Tunstall Trojans fell victim to a shutout sweep.

The George Washington football team is starting to make the game look easy.

Junior running back Dermont Kyle breaks loose for a big gain on Friday night. Kyle finished with a pair of rushing scores for the Cavs.

Junior back Kendell Sanders cuts loose for a first down against Patrick County on Friday night. Sanders finished with a pair of scores for the Cavaliers.

Chatham senior running back Chance Long celebrates what appeared to be a converted two-point conversion for the Cavs on Friday night. However, a holding penalty negated the conversion.