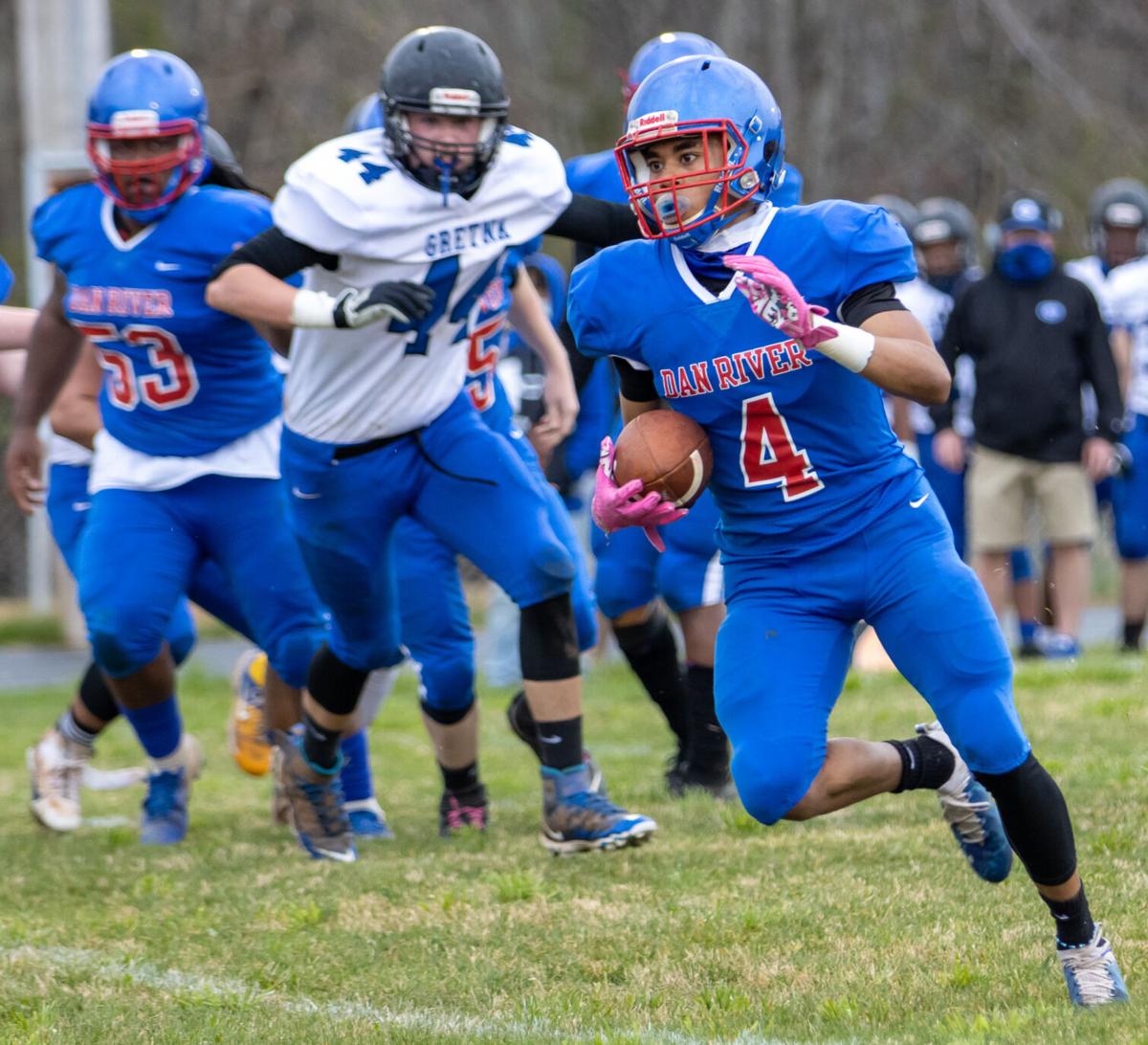 Wildcats running back Robert Carter (4) rushes for Dan River’s first touchdown in their 26-22 win over Gretna. 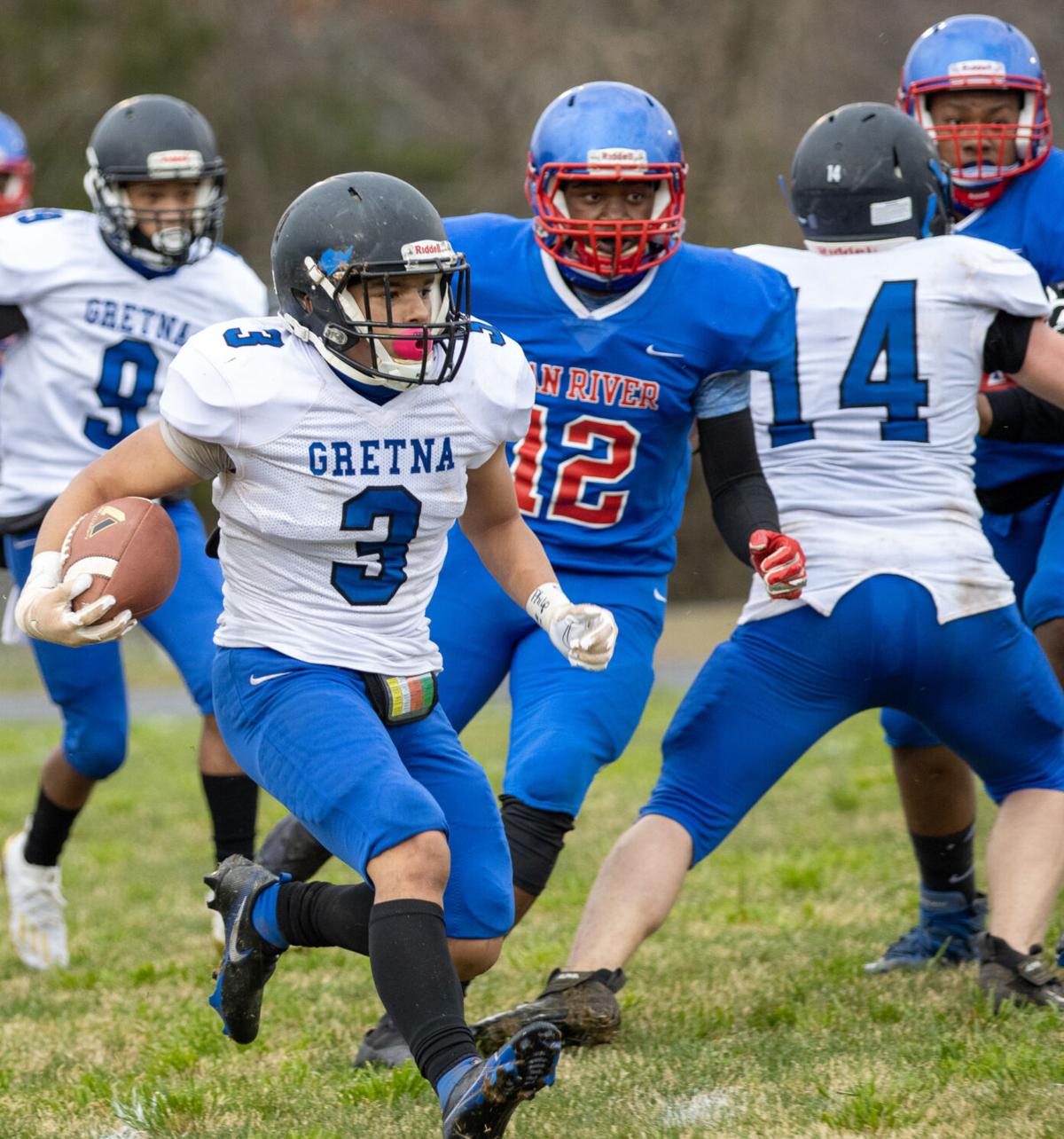 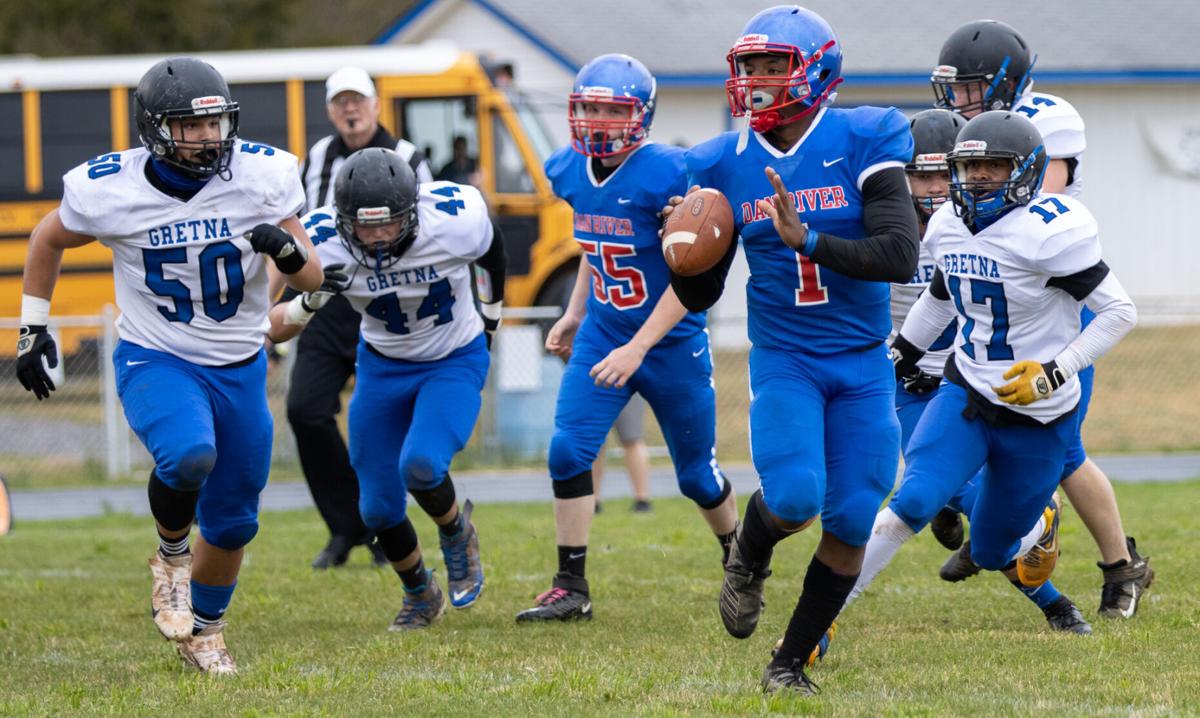 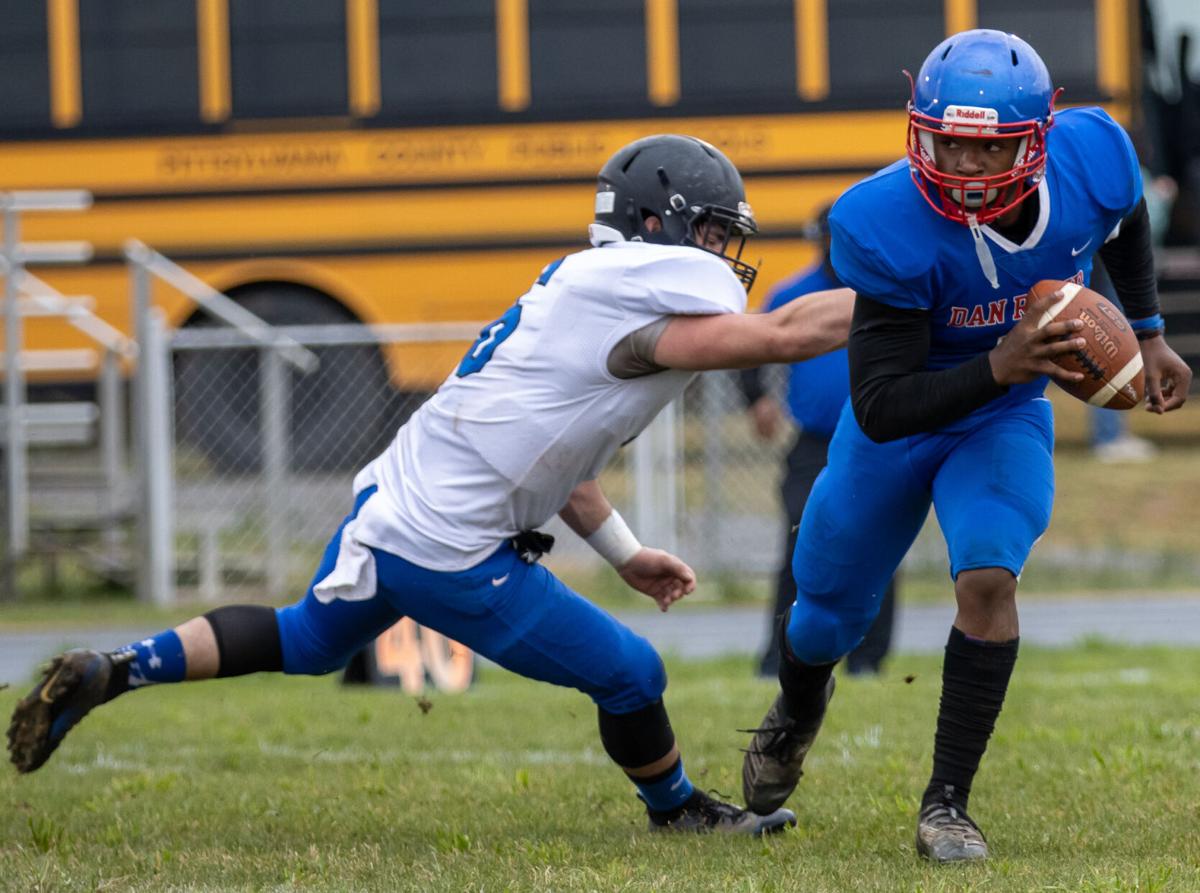 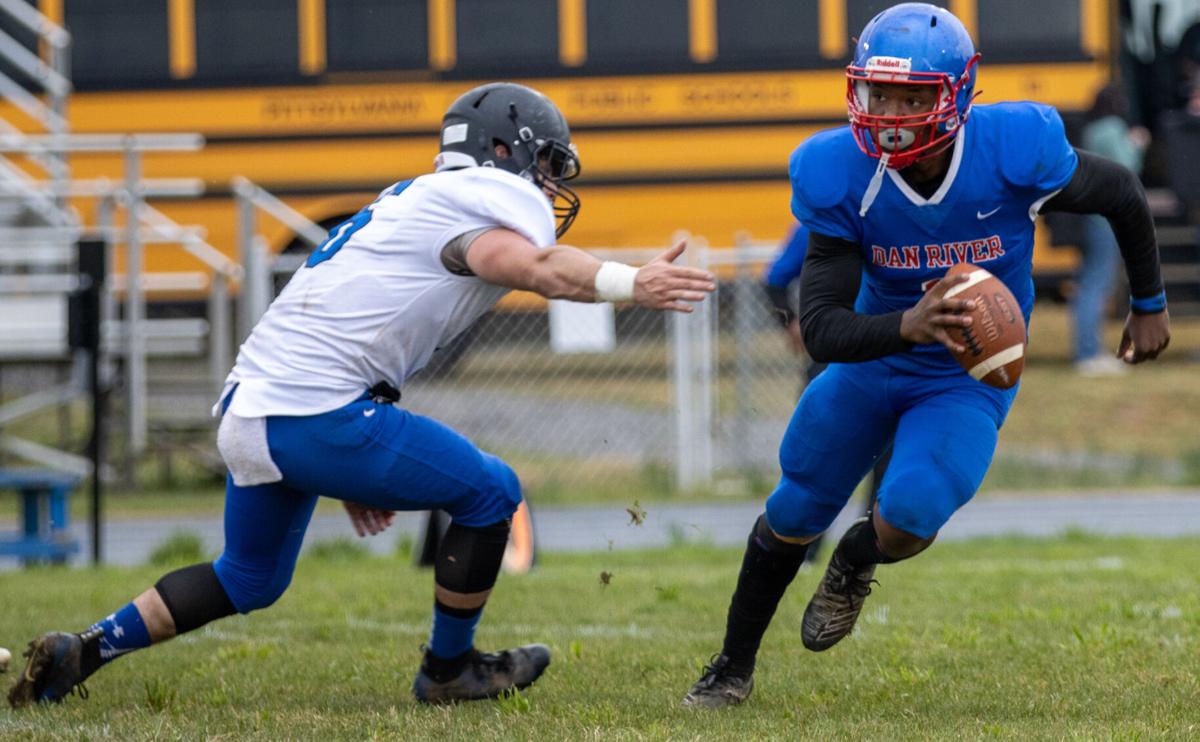 RINGGOLD — It was fourth and four on the Gretna Hawks' 45 line with 40 seconds remaining in the game.

Hawks quarterback Haden Moon handed the ball off to Cameron Mabins, who attempted to go up the middle of Dan River’s defense. But immediately after the handoff, Mabins was met with the hard-charging Wildcats linebacker Ike Farmer. Farmer’s tackle secured Dan River’s 26-22 win over Gretna (1-2), keeping the Wildcats (3-0) atop of the county standings.

“It went back to some of the things that we practiced all week,” said Wildcats head coach Brian Womack, on Dan River’s defensive approach.

“The guys got out of focus of what the game plan was," he said. "They got caught up in the game and got too excited and just try to make bigger plays than they were coached during the week. Once we settled down and start realizing what we talked about during the week, we started to make great plays.”

Even with wet conditions, Dan River came out early on and hit the ground running. Wildcats quarterback Tracey Glass accumulated 46 yards rushing in their first drive of the game, including a 25-yard gain that set them up just outside the Hawks 20-yard line. The Wildcats would punctuate their drive on an 8-yard rushing touchdown from senior Robert Carter.

Gretna’s first possession ended up being the same outcome: a rushing touchdown from Mabins on a drive that lasted seven minutes on 14 plays, the longest drive from Gretna all game. Dan River, up 7-6, responded immediately.

On the kickoff return, less than two minutes left in the first quarter, Gretna was able to kick the ball down to the goal line and the ball rolled barely into the endzone. Senior Jorden Price picked up the ball and from there, and it was just him and an open field. A couple of key blocks from the Wildcats helped Price run the ball back 100 yards for the score. In just a matter of seconds, Dan River was up 14-6 following the point after.

Both teams struggled to get back to producing for the majority of the second quarter. From penalties to negative yards, either team could not find a way to get back on the board. Gretna was able to prevail.

Following a turnover on downs from the Wildcats, Gretna set up shop on their own 47-yard line with five minutes left before the half. The Hawks marched down to the Wildcats' one-yard line where Moon was able to score on the quarterback sneak up the middle, tying Dan River at 14 with just over two minutes left.

Dan River had good field position, getting to their own 45 after the kickoff return, but only to fumble the ball on a bad snap to Glass. The Hawks recovered in Wildcats territory but failed to capitalize on the opportunity after going three-and-out with 22 seconds before halftime.

The Hawks started the second half going three-and-out once again. Dan River set their drive up from their own 32-yard line, and forward on, they drained the clock. Dan River put together a drive that consisted of 17 plays, including a fourth and 17 down that kept the drive alive thanks to a roughing the kicker penalty on Gretna. The Wildcats faced another fourth down situation. Glass connected to Farmer in the back of the endzone on a 16-yard pass to break the tie at 20-14.

Dan River pulled away their lead further mid-way in the fourth. On the Hawks' 30-yard line, third and 27, Glass dropped back into the pocket and made a high-arching pass to Price, who was contested by two Hawks players. Price was able to keep both feet inbounds to make it 26-14.

“You can’t guard just one of our guys,” said Womack, on the usage of usage of multiple receivers. “We have multiple guys who can play at any time.”

Gretna crackrf the scoreboard with three minutes left in the game. Running back Matthew Thompson broke through up the middle gap, and through Dan River for the 10-yard rushing touchdown. Junior Charles Seyfarth converted on the 2-point conversion to cut the Wildcats lead to just four points.

Dan River will look to end their abbreviated season perfect Thursday as they face Tunstall (2-1) at home. A win at home for the Wildcats next week will put them as the No. 1 seed for the playoffs with the opportunity to host.

Gretna will face Chatham (0-3) next Friday. Site for Gretna versus Chatham has yet to be determined.

Wildcats running back Robert Carter (4) rushes for Dan River’s first touchdown in their 26-22 win over Gretna.