CHATHAM — It’s been a topsy-turvy high school football season this year so it only made sense there was little normal about Chatham and Tunstall’s annual cross-county rivalry matchup.

The two sides put together long offensive drives in the second half, only to turn the ball over deep in the other’s territory to cap an already back-and-forth game and in the end, Tunstall ended up on top of the pile with its 19-13 victory over Chatham on Thursday night.

While the storms projected to hit the Chatham area held off in the first half, the weather system finally crossed its way over White Oak Mountain at the start of the third quarter, causing difficulties for both teams.

Tunstall (2-1) got bit by the turnover bug first, coughing up a fumble that Chatham recorded deep in its own territory with just under four minutes left to play in the third. Chatham (0-3) didn’t do itself any favors, coughing up the ball at its own 35-yard line on its ensuing drive, and the Trojans pounced, taking over deep in Cavaliers’ territory with 2:34 remaining.

Things got even stranger from there. Facing a fourth-and-medium on the Cavaliers’ 15-yard line, senior quarterback Dylan Burnette threw a pass to the end zone that was deflected by Damani Hairston, bounced off the hands of a Chatham defender, before landing in the hands of Benjamin Cifers, who hauled the pass in and took it to the end zone for the eventual game-winning score with 11:52 left in regulation.

Tunstall’s defense held Chatham to a three-and-out on its following possession, but a botched special teams play from the Trojans gave the ball right back to the ‘Cavs. The punt made it back to the line of scrimmage, but was touched by a Tunstall player, making it a live ball the Cavaliers jumped on.

It appeared the ‘Cavs were going to take advantage of the mistake, stringing together a methodical drive on the ground thanks to the trio of Kendell Saunders, Jaliah Womack and Michael Gunnell, but the Trojans’ defense stepped up and stripped the ball on their own 3-yard line, preserving the wild victory.

“Playing when it’s wet and raining like it was tonight, our key point was to strip the ball,” said Colin Moore. “The first person hits them, the second person comes in and strips the ball and that’s what we did. It helped us isolate the game and put us in a good mind state.”

The late dramatics served as a perfect ending to a game that was back-and-forth throughout the night as neither side led more than a touchdown and often answered each other’s scoring drives.

The Trojans’ mental toughness in preserving the win didn’t go unnoticed by Hairston or Moore.

“Down the stretch we had a whole bunch of injuries, which kind of hurt us, but our guys have a whole lot of fight in us and we never give up,” Hairston said.

Moore added, “Down in practice, we do this thing called a gut check and I give this victory credit to that because you’ve got to get through it and if it wasn’t for that, I think we would be soft and give up.”

The victory was made a bit sweeter by the fact it helped Tunstall avenge a late loss to Chatham the last time the two teams met back in 2019.

“Actually, their principal last year said that when they beat us last year, we wouldn’t beat them for another 10 years and our mindset coming in was that it was going to be a short 10 years because we wanted to beat them tonight and that’s what pushed us.”

Tunstall got things started on the right foot as it pieced together a 13-play, 55-yard scoring drive on its first possession, capped by Burnette’s 3-yard scamper that made it a 6-0 game midway through the first quarter.

It was Chatham’s turn to fight next as the ‘Cavs countered with a 12-play, 51-yard drive that even the score on Saunders’ 4-yard run that knotted the score with 10:59 left in the first half.

Keeping with the eye-for-an-eye theme, Hairston capped a quick 76-yard scoring drive when he made an acrobatic catch at midfield and took it into the end zone for a 13-6 Tunstall lead with just under nine minutes left in the half.

“I got to give credit to the o-line for blocking and giving Burnette time to throw the ball,” Hairston said. “We just work hard on plays like that every day in practice and hard work pays off. We want to be the best.”

Womack helped Chatham equalize the score when he capped of the Cavaliers’ next possession with a 3-yard run around the left side that knotted the score at 13-13 going into the break.

Burnette finished the evening with a pair of touchdown passes and a rushing score of his own to lead the Trojans. Hairston added his 50-yard scoring reception and Cifers added the Trojans’ final score with his tip-drill catch.

Saunders and Womack accounted for both Chatham scores on the ground. 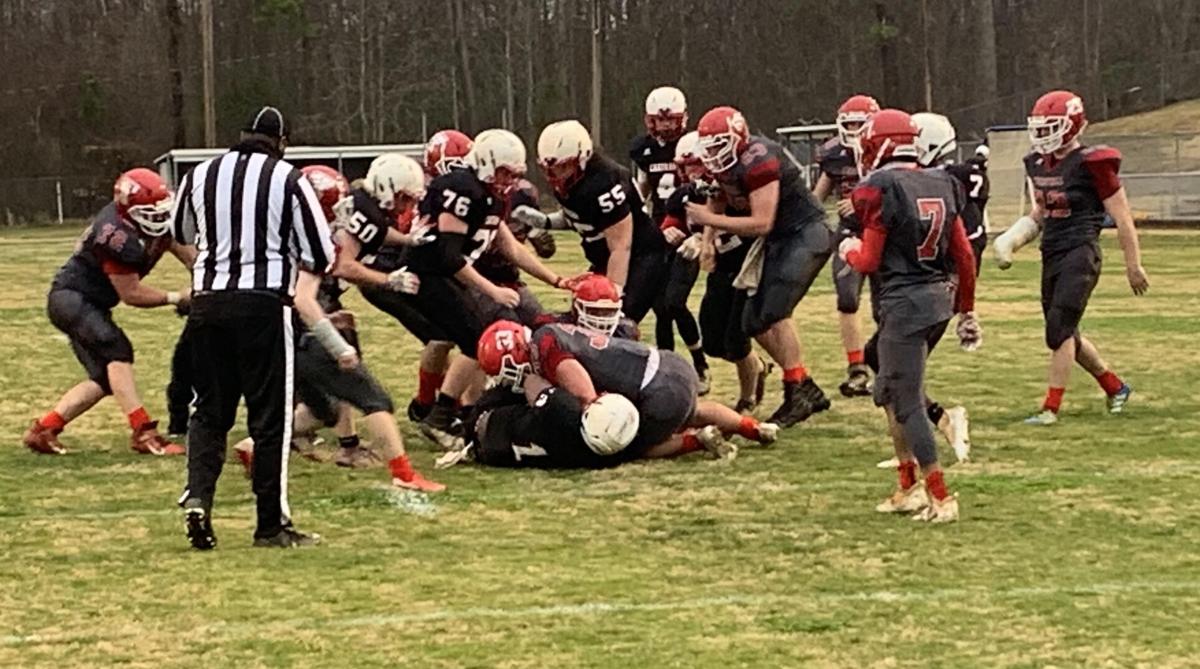 Chatham’s Kendell Saunders gets into the end zone for Chatham’s first score against the Trojans. 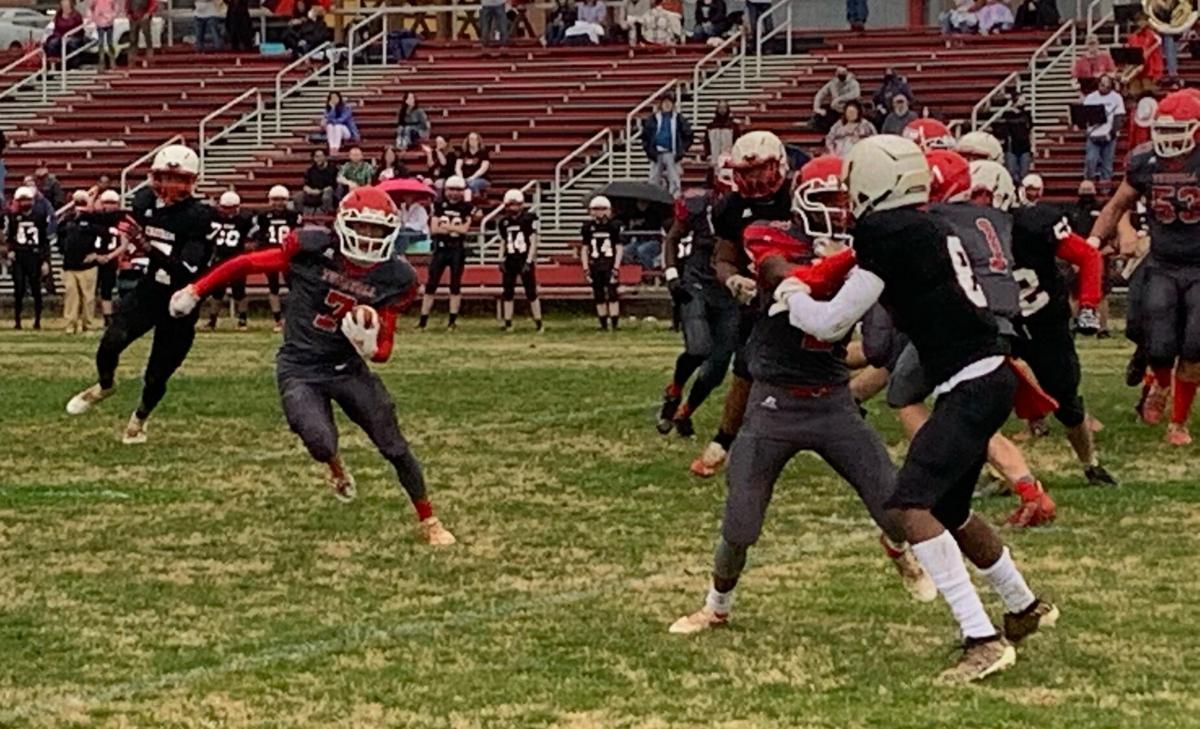 Tunstall's Damani Hairston runs for a short gain in the first quarter of Tunstall's matchup against Chatham on Thursday night. 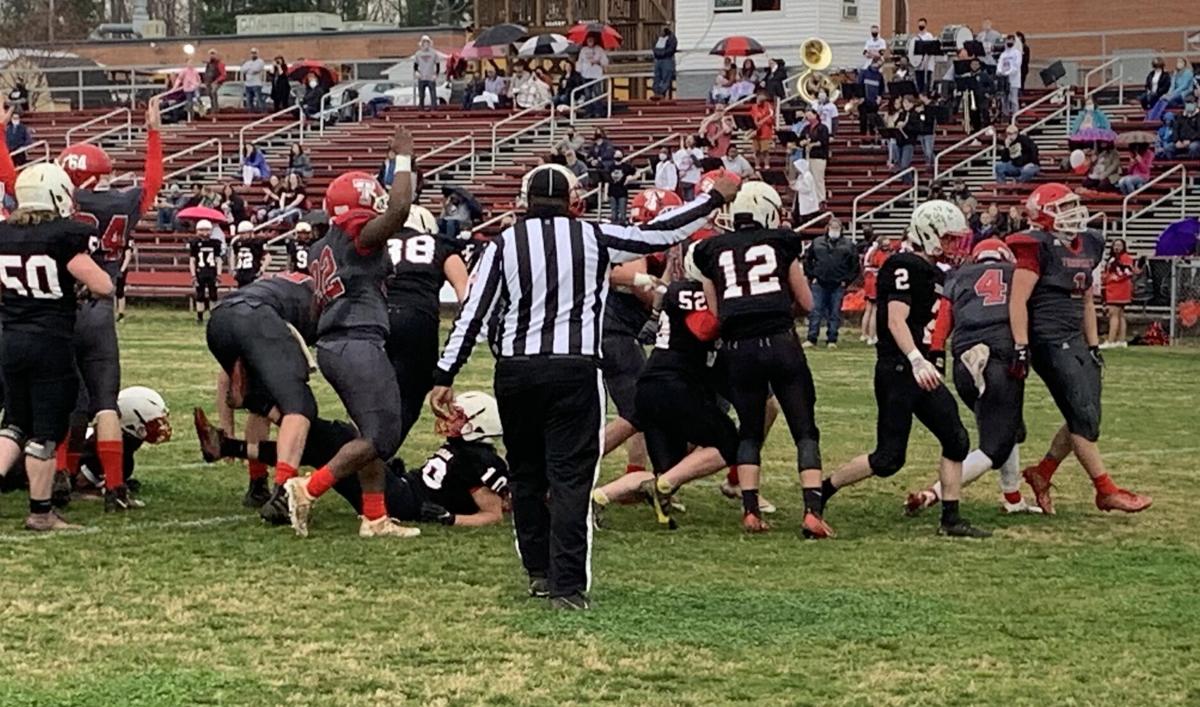