Hollywood screenwriters couldn’t have come up with a better ending for what could have been George Washington senior Zavion King’s final game at J.T. Christopher Stadium on Thursday night.

King’s interception at the 1-yard line with 53 seconds remaining put the kibosh on the potential game-tying drive from Pulaski County and helped second-seeded GW to a thrilling 42-35 victory over the Cougars in the Region 4D semifinals.

Pulaski (4-3) got the ball back with just under two minutes remaining after its defense forced GW (6-1) into a turnover on downs. The third-seeded Cougars took advantage of the good field position, marching the ball 21 yards downfield on senior Corvin Carter’s 21-yard pass to senior Drew Dalton.

The Eagles’ defense stepped in from there, stopping Dalton on a run that pushed Pulaski back to the GW 22. Knowing his high school career was on the line, King pinpointed a Dalton pass and scooped it out of the air for an interception that gave the Eagles the ball on their own 2.

“It’s just never giving up, being in the right place at the right time,” King said.

King kept it simple when asked his thoughts after coming down with the pick.

From there, with Pulaski out of timeouts, GW went to the victory formation and ran out the clock for the win.

“We knew they were a good team and when they came out and executed at the end of the game, our attitude changed because of the adversity,” added junior Ahmad Poole, who recorded a strip-and-score in the first half.

The win helped the Eagles exact a little revenge after the Cougars ended their season in close fashion in the 2018 regional semis.

“It feels great,” said senior Willie Edmunds. “We just came in here with hard work and just did our thing.”

Wilkins, who was a sophomore on the ’18 team, was determined GW wasn’t going to go out this time.

“We couldn’t let that happen again,” Wilkins said. “It just feels good to know we punched them in the mouth and did what we had to do.”

GW advances to the Region 4D title game where it will face either No.4 Amherst or No. 1 Salem. The two teams played Friday night in Salem.

There wasn’t much to suggest the close finish as the Eagles struck for three unanswered touchdowns to take a 42-21 cushion on Edmunds’ 7-yard run with 7:19 remaining in the fourth.

Pulaski quickly took the air out, recovering an onside kick after junior Keyonte Kennedy’s 1-yard touchdown run pulled the Cougars back within two scores. Pulaski kept punching, repaying the onside recovery with a four-play, 45-yard drive that culminated in senior Chase Dotson’s 11-yard touchdown reception and ensuing 2-point conversion that made it a 42-35 contest.

After a slow start to the game, GW flipped the theme in the second half. Senior Sha’Kobe Hairston’s 1-yard run, his second rushing score on the night, gave the Eagles a 28-21 lead with 3:51 left in the third quarter.

GW’s defense forced a three-and-out on the Cougars’ next possession and Edmunds responded in kind on the Eagles’ first play from scrimmage with a scorching 48-yard run down the right side that made it a 35-21 contest with 2:30 left in the third.

The Cougars controlled the game early, striking for a pair of touchdowns in a minute-span during the first period. Senior Ethan Gallimore’s 10-yard touchdown reception got Pulaski out in front and a 15-yard fumble recovery from sophomore Diego Turner doubled down on the Cougars’ lead with 4:51 left in the opening quarter.

The Eagles answered with a seven-play, 65-yard drive capped by Hairston’s 1-yard run that made it a one-score game nearing the two-minute mark.

After forcing a three-and-out, GW knotted it when junior Jeb Byrnes found Edmunds for a 29-yard touchdown reception.

For the fourth consecutive week, the Eagles’ defense got on the scoresheet when Poole outmuscled Gallimore and stripped the ball before taking it back for a 35-yard score that gave GW its first lead at 21-14 nearing halftime.

“It’s just a lot of grind in the offseason and keeping working and working and then my teammates, they play a huge factor,” Poole said. “Then our defense just keeps getting better and better every week and just constantly working to get better.”

Poole recalled being a mixed bag of emotions after the play.

“I was everywhere, I was tired, I was happy, I was running, everything. I was happy, my teammates were happy.”

Pulaski had a little left in the tank, ending the half with sophomore Quemar Porter’s 6-yard run that tied the game at 21-21 at the break.

Edmunds paced the Eagles with a trio of scores, while Hairston chipped in with two.

Edmunds’ performance marked his fourth hat trick of the season.

“Just dedication and hard work,” Edmunds said. “My O-line’s done good and I get behind my blocks and do my thing.” 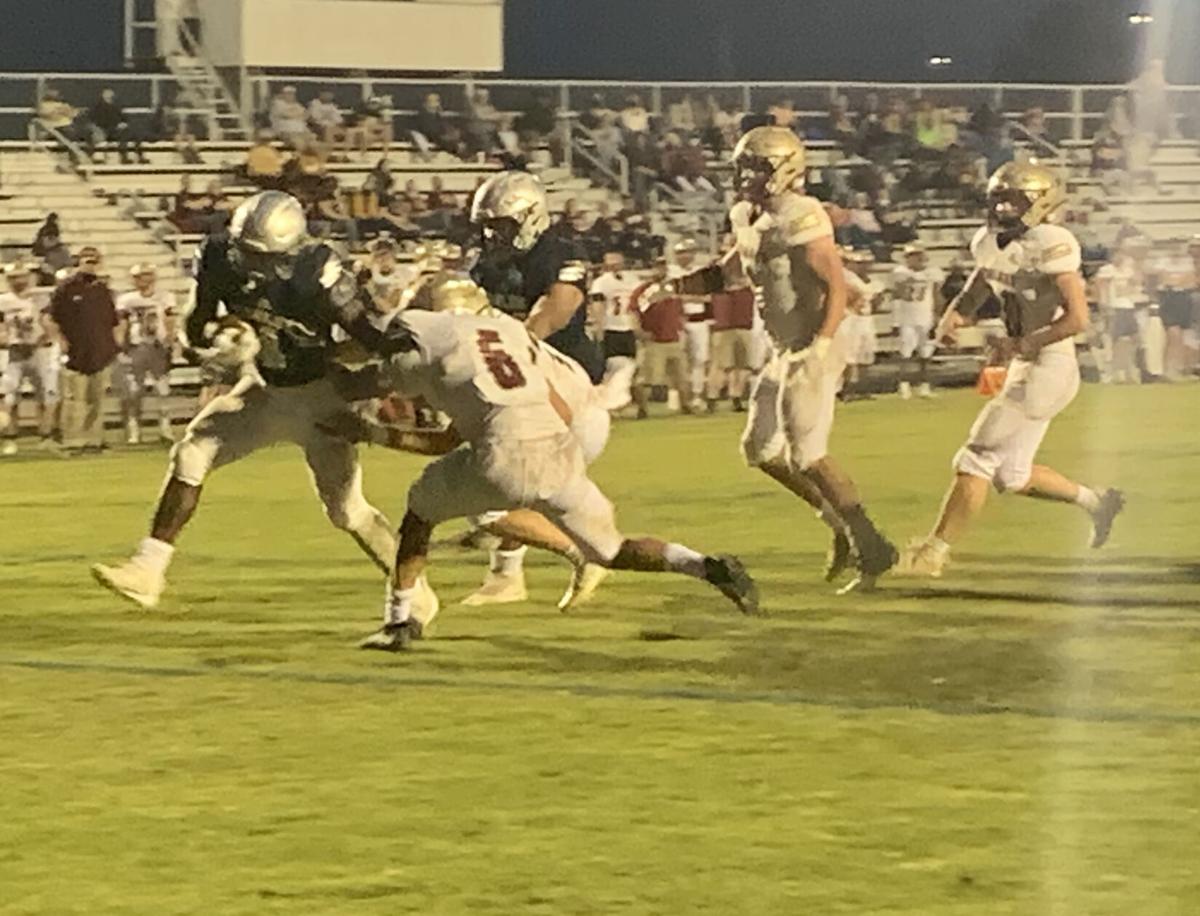 GW senior Sha’Kobe Hairston punches the ball into the end zone for his second rushing score in the third quarter. 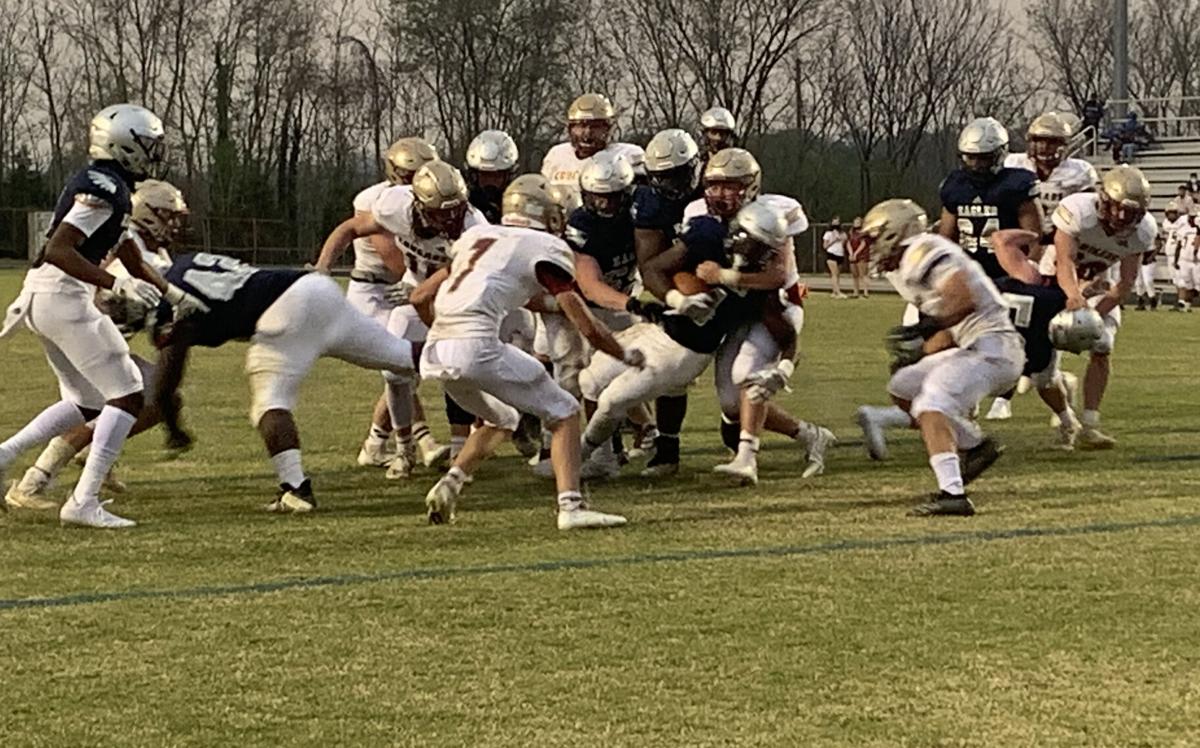 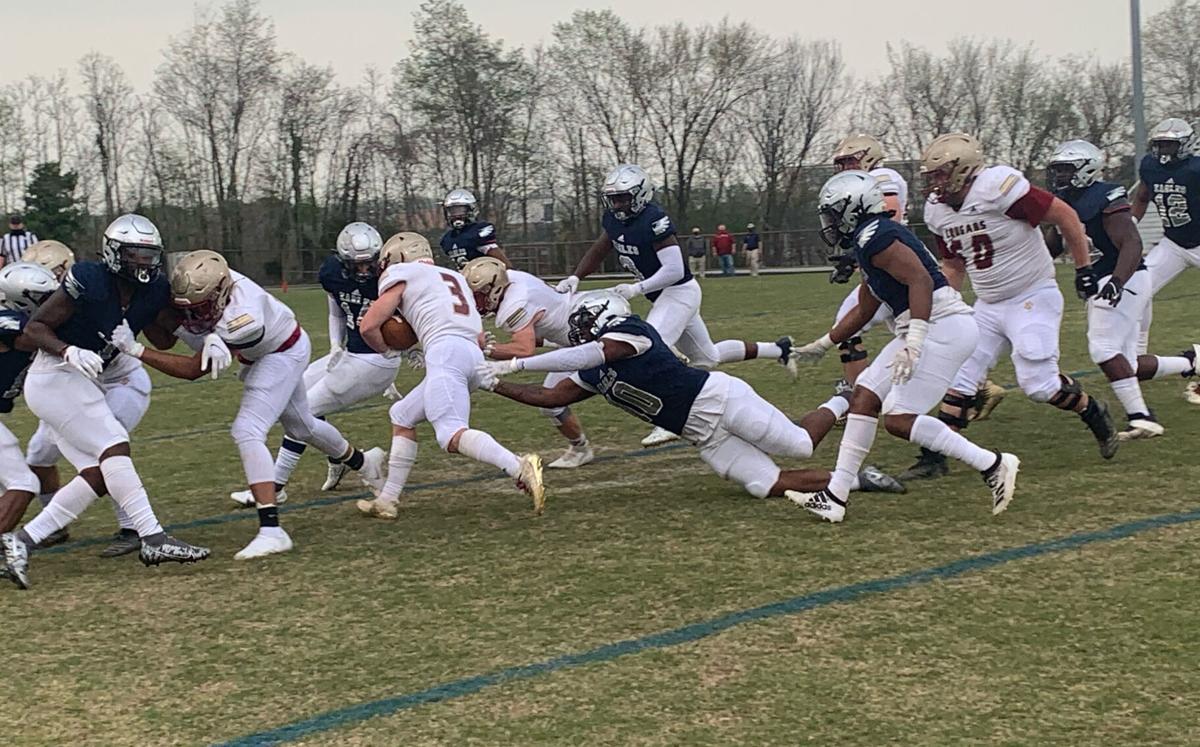 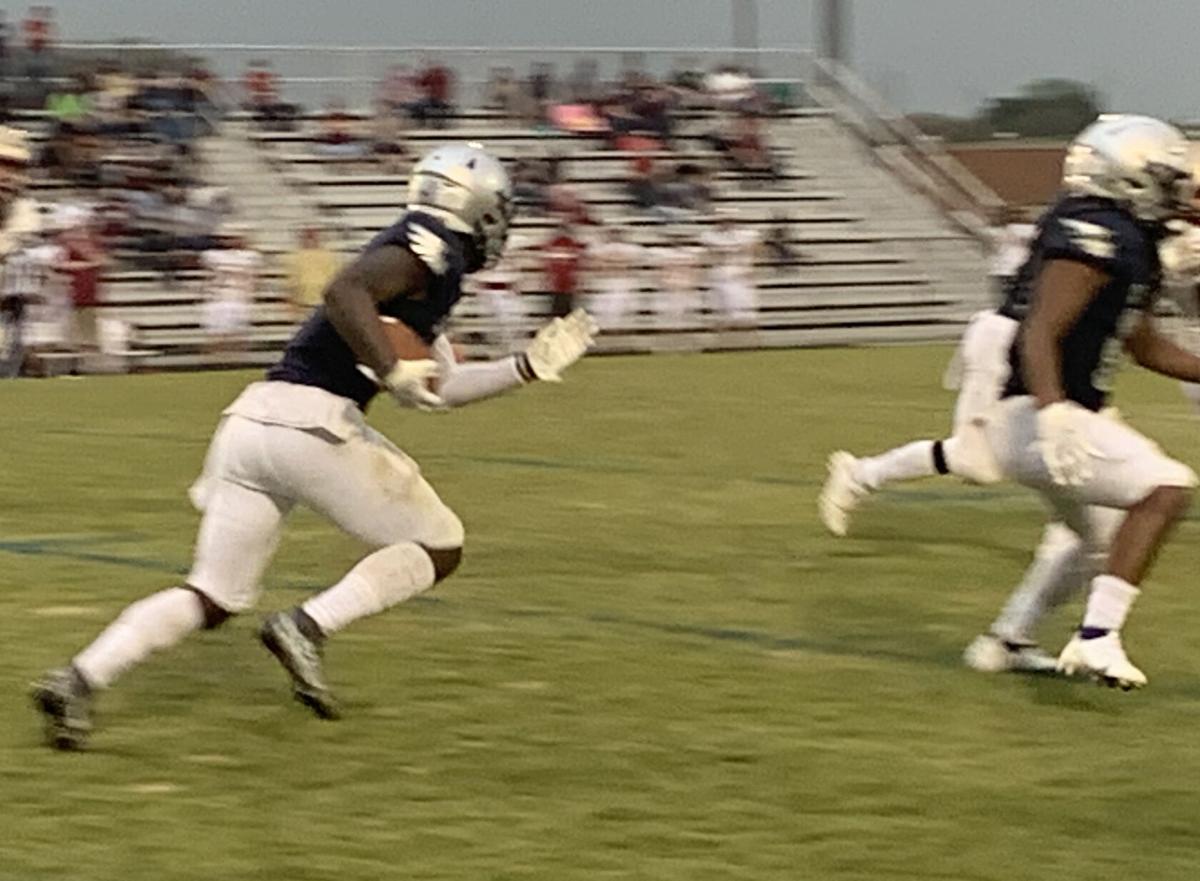 GW senior Sha'Kobe Hairston breaks loose for a first down after catching a pass from junior quarterback Jeb Byrnes in the first quarter.