Less snow than normal expected, but it may get off to a cold start.

Precision forecasting several weeks in advance for a specific hour or a specific day is more a game of climatology and statistics. However, there is some skill in providing broad outlooks for an entire season, or for part of a season.

These outlooks are excellent exercises in our quest to better understand the atmosphere, which is why we continue to do them. Much of the data here was provided by the World Climate Service, which has an office in Charlottesville.

For this outlook, we define winter as the three coldest months of the year: December through February.

In Virginia, we expect a winter that will end up slightly warmer than average with snowfall near or below average. In other words, when all is said and done after St. Patrick’s Day, we will not look back thinking it was an especially cold or snowy winter.  Some snowfall expectations for this winter (inches):

Importantly, winter is rarely the same for 90 days. The classic example is the winter of 1989-90 in Virginia, with a brutally cold December followed by a much warmer January and February.

With that in mind, we think the winter will be front-loaded, with the best chance for substantial accumulating snow coming in December. Having said that, snow is certainly possible in January and February, we just suspect the chances are a little better in December.

We also believe there will not be a lot of prolonged cold. By that we mean no period more than 5 consecutive days with an average temperature at least 10 degrees below normal.

Actually, we lean toward the opposite, expecting a couple of periods at least 10 degrees above normal for 5 consecutive days. The best chance of that relatively warm spell comes in February.

In that same theme, we suspect December will be the coldest of the three months, with respect to average, and February will be the warmest:

How we came up with this outlook

We used a combination of analog forecasting, computer simulations, and climatology.

Regular patterns in ocean temperature correlate with specific weather patterns across the globe. Foremost is the current La Niña, the pattern of cooler-than-average water in the central and eastern Pacific Ocean along the equator.

We also looked at ocean temperatures in the north Pacific and the winds that regularly reverse direction in the lower stratosphere. These are known as the Pacific Decadal Oscillation (PDO) and the Quasi-Biennial Oscillation (QBO).

While not a perfect match, there are current similarities to these patterns to this time of the year in 2010, and that December was substantially colder than normal. In fact, snow fell across much of the state late in the afternoon and evening on Christmas Day 2010.

However, water temperature in the western Atlantic is warmer now than in 2010, tempering our forecast for this December. The warmer Atlantic and the background planetary warming signal have also nudged our overall winter forecast in a warmer direction for January and February for 2023 compared to 2011.

Of the four seasons, winter is warming fastest in Virginia, with the strongest warming coming in December and February. The most likely reason is that Arctic outbreaks into Virginia are not as intense nor do they last as long as 50 years ago. With the Arctic warming three times faster than the rest of the planet, the air from there is just not as cold when it arrives in Virginia.

Week-to-week swings in temperature are also guided by a fluctuation called the North Atlantic Oscillation (NAO). It comes in positive and negative phases, with the negative phase favoring colder air in Virginia and lending itself to better chances for large-scale snow storms (i.e. nor’easters).

Many of the longer range computer simulations favor a negative NAO in December, before becoming more neutral or positive into January and February. And this also supports what we are seeing from the analog forecasts.

So the three main take-home points for this winter in Virginia:

As a last gasp for those craving the cold, the last winter that was colder than average was 2014-15, so we are statistically overdue.

But as the climate continues to warm, cold winters like we had in the 1970s are going be increasingly difficult to come by. While that might mean lower heating bills, it also means more bugs, pests, and threats to Virginia's forests in the decades to come.

Less snow than normal expected, but it may get off to a cold start. 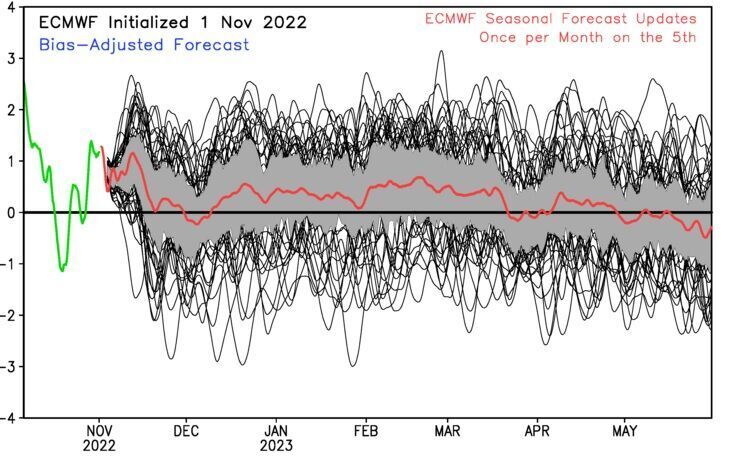 Forecast NAO index from the European Center for Medium Range Weather Forecasting.  Red line is the average of all simulations. Values below zero suggest colder than average temperatures along the East Coast. (World Climate Service)