Judging by recent years, it could seem like Virginia has experienced more in the way of cool and dry conditions in 2021.

Maybe “not as hot” and “not as wet” would be the more fitting way to put it.

The statewide mean temperature for the first six months of the year was the lowest since 2015. Precipitation across the commonwealth between January and June was the lowest in nearly a decade.

But when we average the highs and lows over the past six months and compare 2021 to our long-term weather history, this has been another warmer-than-average year for Virginia. That’s no surprise as climate change drives an upward trend.

According to National Oceanic and Atmospheric Administration data, Virginia's January-June temperatures for 2021 outranked 75% of years in the 20th century.

But alongside only 21st century years, 2021 is running just below the middle of the pack.

Virginians of the 1920s likely would have regarded this as a warm year, but we may end up calling this relatively cool for the 2020s.

Globally, the January-June period was 8th warmest in NOAA records dating to 1880.

Jet stream patterns and oceanic cycles have led to regional variation. Parts of eastern North America, east Asia, north Africa, the Middle East and the Pacific Ocean are on track for a record-hot year. Most land and ocean areas have been warmer than long-term average. On land, cooler than average year-to-date conditions have been relegated to the Ozarks region and part of eastern Australia.

A La Niña pattern in the equatorial eastern Pacific often dampens global temperatures, versus the added warming of an El Niño episode like that of 2015-16. The cycle is currently neutral after last winter's La Niña dissipated, but another La Niña is likely for the winter of 2021-22. Back-to-back La Niña winters are not unusual, but the next one may lead to different effects in Virginia.

Precipitation is a more complicated tale, with localized wetness and drought nearly canceling out on the statewide level. As a whole, we were nearly 1 inch behind for the first six months of this year.

Warming air and oceans can set the stage for heavier downpours and wetter tropical systems. But any long-term rise in Virginia's overall precipitation is much more gradual, and dry years still come with the territory.

The lack of spring rain was especially poorly-timed for planting some crops and the topsoil is still dry for some, but we're far from a major deficit at this point.

Our January-to-June moisture was actually much closer to long-term average than the past six years, which ran up bigger surpluses and resulted in more widespread flood issues.

Excess heat and rain could be the themes for late summer and early fall, if NOAA's seasonal projections bear out.

Mean temperatures for the August-to-October period are most likely to be above normal across most of Virginia. Above-normal rainfall is also favored over the next three months. (NOAA's weekly, monthly and seasonal outlooks are now compared to the 1991-to-2020 baseline).

Forecasters and their computer models already see a wet pattern prevailing for the Eastern Seaboard. The peak months of the Atlantic hurricane season once again look to be more active than usual, though it's too early to say how many systems would come our way. At this point, remnant rain is more likely to be detrimental than beneficial.

Meanwhile, below-normal rainfall is expected across the already drought-stricken and fire-prone Pacific Northwest and northern Rockies.

Most of the Lower 48, with the exception of the southern Plains and Mississippi Valley, is projected to have above-normal temperatures averaged over the next three months. That signal for warmth is strongest over the Northeast and West.

Even if we didn't have that forecast guidance, there's something to be said for persistence when we look at Virginia's weather history.

To be clear, there's no reliable correlation between weather patterns in the first half of the year versus the second.

But once an anomaly is well-established in the first half, it is baked in to the statistics for the whole year.

So a year that is especially warm or wet or dry by summer requires a bigger opposite to change course.

Virginia's hottest year at the halfway mark was 2012, which ended up being the hottest one overall. The state's driest year through June - 1986 - was still among the ten driest years by December.

Big turnarounds happen, but they are uncommon: 86% of the time, years with above-average temperatures through June (using a 20th century baseline) closed out the year in that fashion.

Were it not for a warm fall, 1978 was headed for being Virginia's coldest year at the halfway mark. The last reversal from a warm first half to a cool second half was in 2000.

As for exceptions, the biggest blown surplus was 1998, which went from the wettest January-June on record to a late-year drought. Major second-half turnarounds happened in 1945 and 1985.

The odds are against 2021 becoming a top ten year for temperatures in Virginia, but it's not impossible.

For that to happen, the weather would have to play out like 2016 did.

The midyear mean in 2016 was 52 degrees and ranked 33rd warmest, not unlike this year's statistics. But by December, 2016 vaulted into an overall tie for 7th warmest year due to persistent heat in late summer and fall.

Danville folks should be prepared for high temperatures. It looks to reach a balmy 84 degrees. A 63-degree low is forecasted. Models are showi…

Ask the Weather Guys: When does autumn officially begin?

The autumnal equinox is when the Earth enjoys equal amounts of day and night for the first time in six months.

Hurricane hunters' flight patterns shown by meteorologists on TV may look like random, odd shapes, but they serve specific purposes for each storm.

Danville folks should be prepared for high temperatures. It looks to reach a warm 88 degrees. Today's forecasted low temperature is 65 degrees…

Danville will see warm temperatures this Tuesday. It looks like it will be a mild 76 degrees. 68 degrees is today's low. You may want to stay …

It will be a warm day in Danville. The forecast calls for it to be a mild 77 degrees. Expect a drastic drop in temperatures though, with a low…

Blue Sky Science: Does an earthquake ever form a new tectonic plate?

One earthquake by itself isn’t enough to create a new tectonic plate, even if it’s a really large earthquake.

Is climate change to blame for extreme weather events? Attribution science says yes, for some 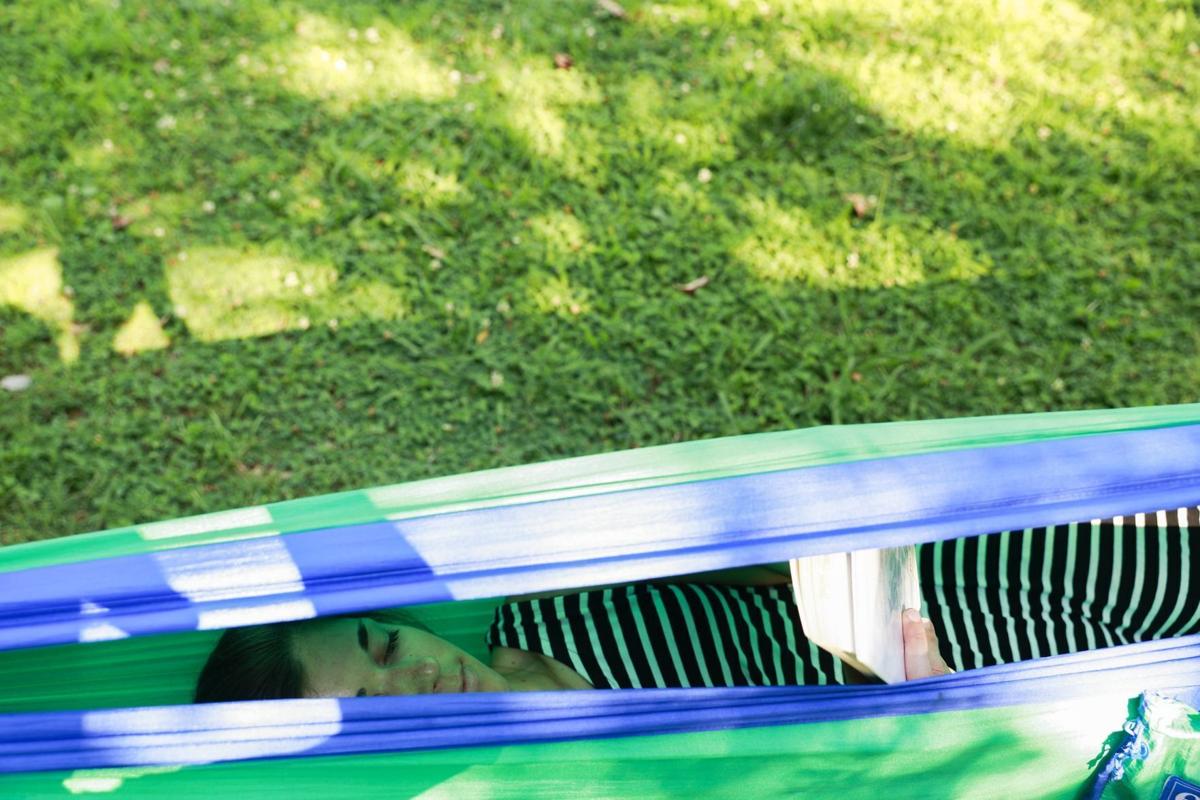 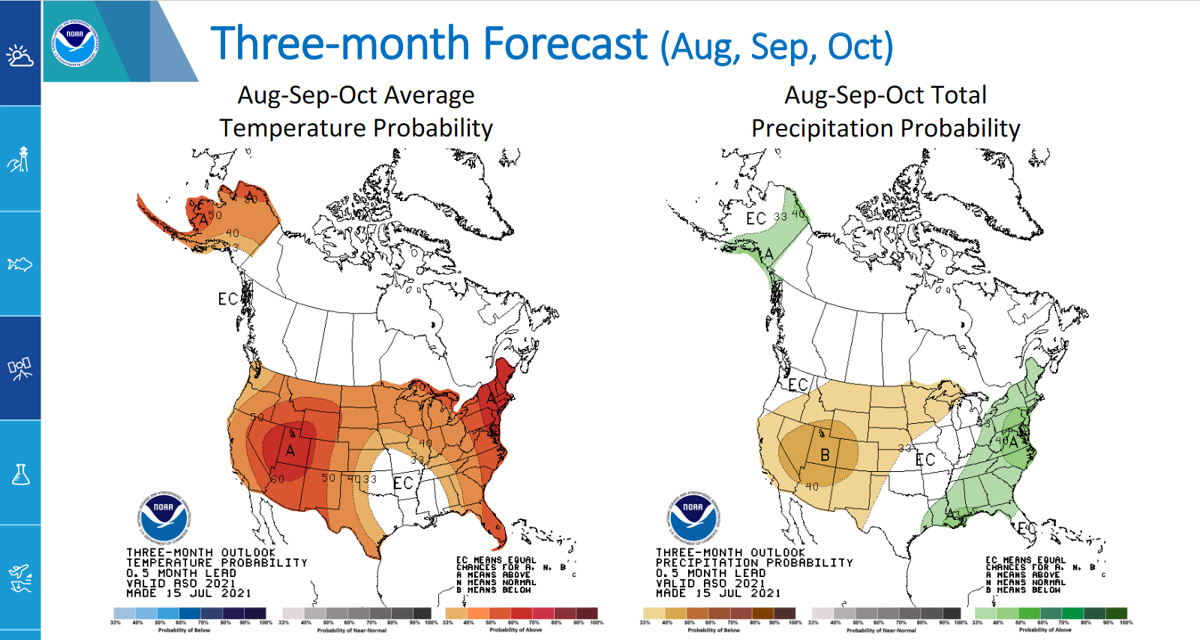 Probabilistic outlooks for temperature and precipitation across the United States between August and October. Above-normal temperatures are favored for most of the nation, with the highest odds over the West and Northeast. Virginia is projected to be wetter than usual, while a lack of rain could continue to be a problem for much of the west. 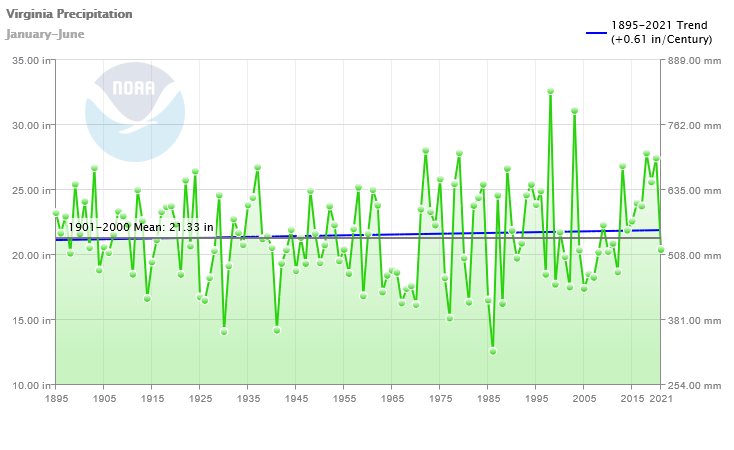 January-June precipitation across Virginia between 1895 and 2021. This is the first year-to-date deficit since 2012, albeit a slight one. 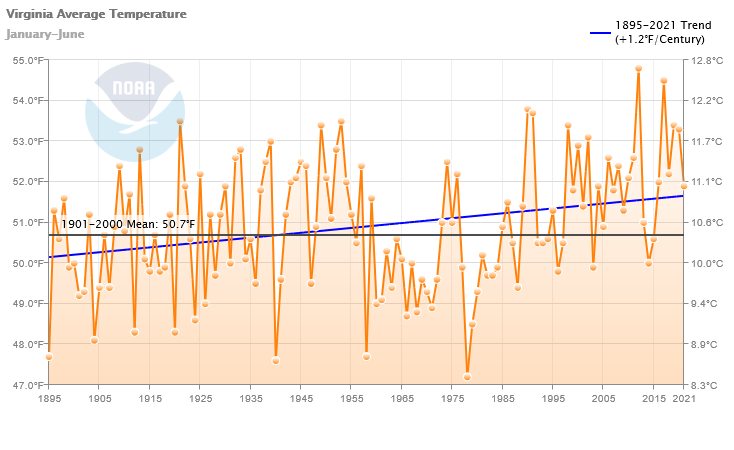 Virginia's January-June mean temperatures from 1895 to 2021, showing a gradual upward trend. Most years in the 21st century have been above the 20th century average (black). 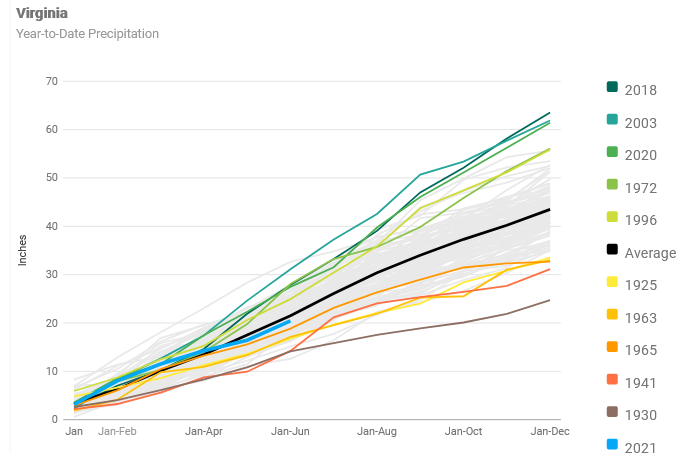 Year-to-date precipitation progress in Virginia, with 2021's pace (in blue) compared to average (black) and every other year on record since 1895. The years that ended up being wettest and driest are highlighted. 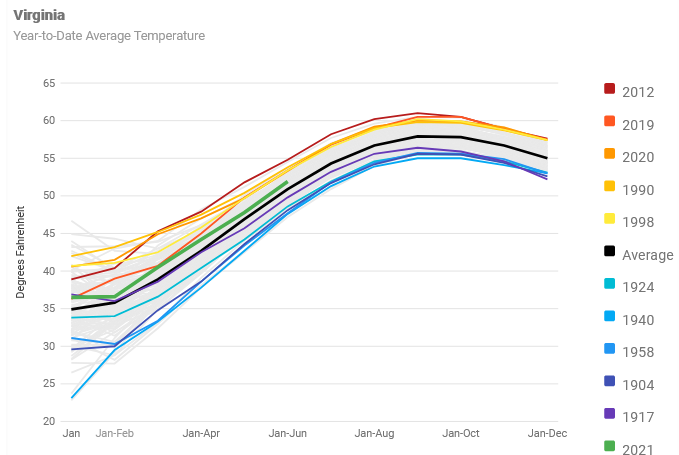 Year-to-date mean temperature progress in Virginia, with 2021's pace (in green) compared to average (black) and every other year on record since 1895. The years that ended up being wettest and driest are highlighted. 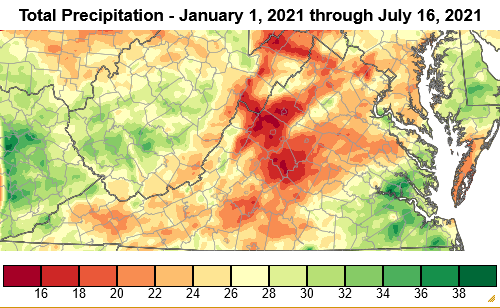 Year-to-date precipitation across Virginia as of July 16, 2021. The highest amounts have been measured east of Richmond, while places between Farmville and Harrisonburg have been driest. 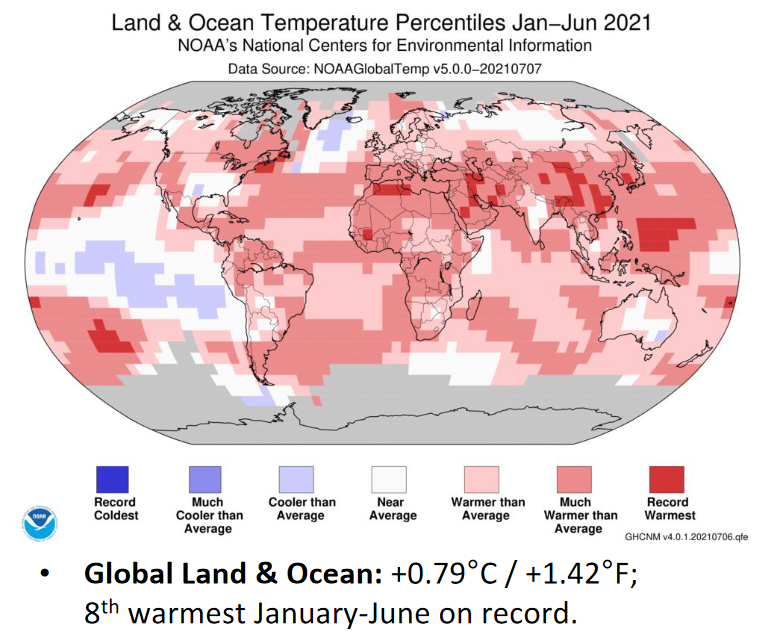 January-June global temperature rankings, showing a majority of the land and ocean surface experiencing above normal conditions so far this year.